The new Showtime drama Yellowjackets is Lord of the Flies meets Lost meets Alive meets It meets the collected works of Megan Abbott. Many of its influences already overlap, and thus work together well. The ones that don’t can at times combine to create something that feels new and potent, but at others make it feel like the stew could have done with fewer ingredients.

Here are the basics: In 1996, a New Jersey high-school girls’ soccer team (the titular Yellowjackets) win the state championship and board a cross-country flight to compete in nationals. Instead, the plane crashes way off course in the remote Canadian wilderness, kicking off a mysterious ordeal that leaves only some of the girls alive to be rescued 19 months later. In the present, four of those survivors — bored housewife Shauna (Melanie Lynskey), recovering addict Natalie (Juliette Lewis), aspiring politician Taissa (Tawney Cypress), and creepy nurse Misty (Christina Ricci) — are still haunted by what they really did in those woods, and by the possibility that someone in the real world has uncovered their dark secret.

Created by Narcos alums Ashley Lyle and Bart Nickerson, Yellowjackets primarily shifts between the 1996 and 2021 timelines. Periodically, though, the story delves even farther back to events from days or even years before the fateful plane crash, as if Lost were attempting to do flashback and flash-forward scenes within the same episode, rather than using those different devices for different seasons. The approach clicks when the focus is on one of the characters we know in all the time periods, like seeing Misty (played as a teen by Samantha Hanratty) evolve from the team’s mousy joke of an equipment manager to a force of nature post-crash. (“I took the Red Cross babysitter training class — twice,” she snarls, in a line reading that Hanratty makes simultaneously funny and badass.) But when the wilderness scenes dwell on a character who doesn’t seem to have made it to adulthood, like upbeat team captain Jackie (Ella Purnell) or the unstable Lottie (Courtney Eaton), everything feels out of balance. 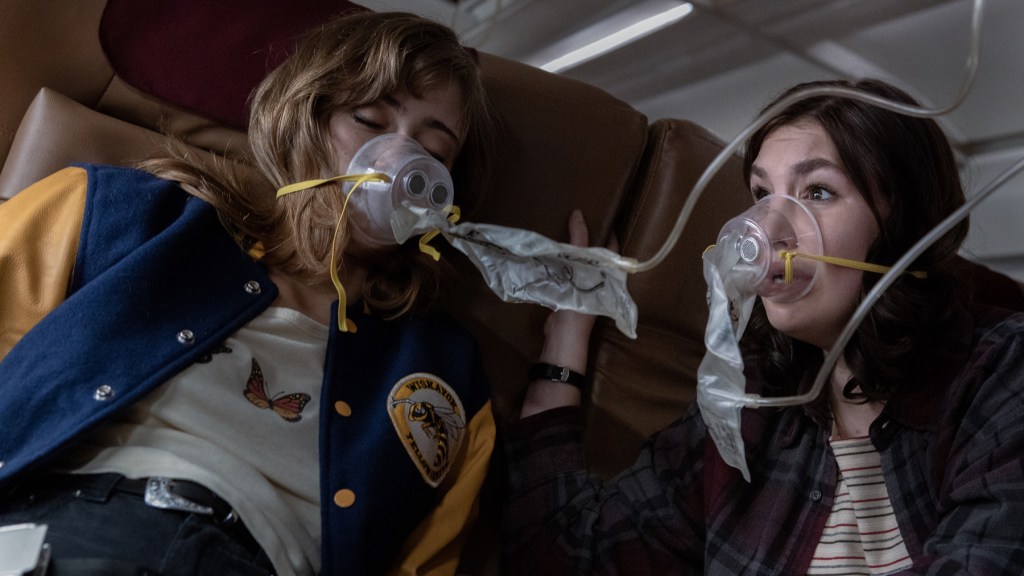 The casting of the quartet of young actors to play the teen versions of the adult leads is impeccable, with Sophie Nélisse so spooky at times as teen Shauna that a viewer couldn’t be blamed for assuming she’s Lynskey’s daughter in real life. And since Lewis, Ricci, and Lynskey were all starring in movies years before the show’s plane crash takes place, Yellowjackets has fun playing with their child-actor screen personas. The adult Natalie seems more or less like how Lewis’ character from Cape Fear and other early-Nineties roles would have ended up, while Ricci gets to channel a level of weird comic intensity she hasn’t approached much since her Wednesday Addams period.

The standout, though, is Lynskey. She’s always great, but Shauna feels like the kind of dark, messy, and charismatic part she’s been waiting her whole career to play. It’s not quite her Walter White role — at least, not in the episodes given to critics — but there are wildly appealing hints of middle-aged ennui in overdrive, as Shauna drifts away from high school boyfriend-turned-husband Jeff (Warren Kole) and rebellious daughter Callie (Sarah Desjardins).

As with the wilderness sequences, though, there’s an imbalance. Lynskey’s giving the highest-energy performance, and the creators seem to recognize this, even as they keep Shauna largely detached from the main plot. It’s up to Natalie, Misty, and Taissa (whose campaign for state senate keeps grinding things to a halt) to investigate who is stalking them, while Shauna largely exists on a show-within-the-show.

There are also allusions throughout to the idea that more happened in the woods than just mean girls run amok without adult supervision — that some of the girls became monsters only because they were under the influence of the paranormal kind. But the initial episodes seem to have exactly the wrong amount of that. There’s plenty of rich material in the way different characters change through the ordeal, or just in the specifics of putting that many teenage girls in the same place for an extended stretch. (That everyone’s periods sync up becomes a crucial plot point.)  As a result, the intermittent hints of the supernatural just play as distractions, rather than as a compelling slow build. Better to have either ditched that stuff entirely or leaned into it right away(*).

(*) Keep in mind that I’m also the idiot who, in the summer before Lost debuted, watched the pilot and then asked one of the show’s writers, “Are you sure there needs to be a monster on the island?” But Lost was more upfront about its genre-straddling ambitions from the start, where Yellowjackets at times comes across as a bait-and-switch.

As a result of those various issues, Yellowjackets starts out with a gripping pilot, directed by Karyn Kusama, and then gradually loses narrative momentum, rather than gaining it the way you hope a twisty, serialized show like this would. But when the elements align properly — Shauna delivering a cutting monologue about what Callie’s life would be like if her parents got divorced, or the show’s expertly-timed deployment of classic Nineties songs by Liz Phair, the Cranberries, Wilson Phillips, and more — it’s easy to experience a rush of adrenaline similar to how the young Yellowjackets felt racing upfield on the way to scoring another goal. We’ll have to see if that’s enough to make the show a champ, or if it’s destined to crash and burn along the way.