Early in Amazon Prime Video’s new sci-fi comedy Upload, a character explains that her grandmother is in heaven. “Which one?” she’s asked.

The question makes sense within the context of the near future depicted in Upload, where tech companies can — for the right price — digitize human consciousness and grant customers a virtual afterlife of their choosing. There are computerized heavens modeled on the hills of Tuscany, the casinos of Las Vegas, the African veldt, and more, including Lake View — “the only digital afterlife modeled on the grand Victorian hotels of the United States and Canada” — where our hero, young coder Nathan (Robbie Amell) finds himself after dying in a self-driving car accident.

But the question applies just as easily to the context in which Upload arrives. We are in the middle of Peak TV Afterlife, with lots of shows — many of them from people who used to work on Parks and Recreation with Upload creator Greg Daniels — set partially or entirely in versions of heaven where things aren’t working quite as they should. We only just said goodbye to The Good Place, and, even more recently, the finale to Devs discussed the idea of the recently deceased being given a new digital life. Amazon already dabbled in afterlife ennui with the short-lived Maya Rudolph/Fred Armisen vehicle Forever, and the first season of TBS’ Miracle Workers reimagined heaven as a corporate factory run by an incompetent CEO named God. The HBO miniseries Years and Years had one of its leads attempt to upload themselves to the Web before they died. And several Black Mirror episodes — including arguably the two most famous ones, “San Junipero” and “USS Callister” — involve characters gaining immortality through digital consciousness transfer.

Daniels is among the most gifted and influential comedy minds of the last 25 years of television, responsible for everything from classic Simpsons episodes like “Bart Sells His Soul” and “Homer Badman” to excellent shows he created or co-created, such as King of the Hill, the American Office, and Parks and Rec. But Upload has been in development for what seems like an epoch, going back to the HBO regime of Michael Lombardo (who hasn’t worked there since the Obama administration). So, through no real fault of his own, he can’t help but seem way behind the curve this time.

The show’s satiric portrait of a world in which the afterlife is just an app with pop-up ads and different subscription tiers plays like a longer, gentler Black Mirror story. Nathan’s dawning realization that his wealthy girlfriend Ingrid (Allegra Edwards) — who can video chat with him and even visit him in Lake View using virtual reality equipment — is a vapid monster with whom he will soon be doomed to spend eternity recalls the questions Forever asked about what happens when “’til death do us part” gets an unlimited extension. The bumbling artificial intelligence (Owen Daniels) that staffs Lake View is basically a creepier, much less helpful version of Janet from The Good Place. Nathan quickly grows frustrated to find this grinning A.I. around every corner; the sense of familiarity that Upload unwittingly evokes is just as omnipresent.

Upload has some sharp points to make about income inequality. Nathan can’t afford Lake View himself, and winds up prisoner to the whims of his sponsor Ingrid, while our frequent glimpses of the world he left behind suggest the have-nots have less than ever. (The One Percent can not only get into these digital heavens, but are the only people left who can afford real food, as opposed to the kind made in a 3D printer.) Its commentary about all the ways we’ve allowed corporations’ long tentacles to wrap themselves around our lives (or afterlives) is reminiscent of half of Black Mirror (get ready to be reminded of the one about the perils of being able to rate humans on a five-star scale), but that doesn’t make it any less pertinent to our own increasingly dysfunctional world. 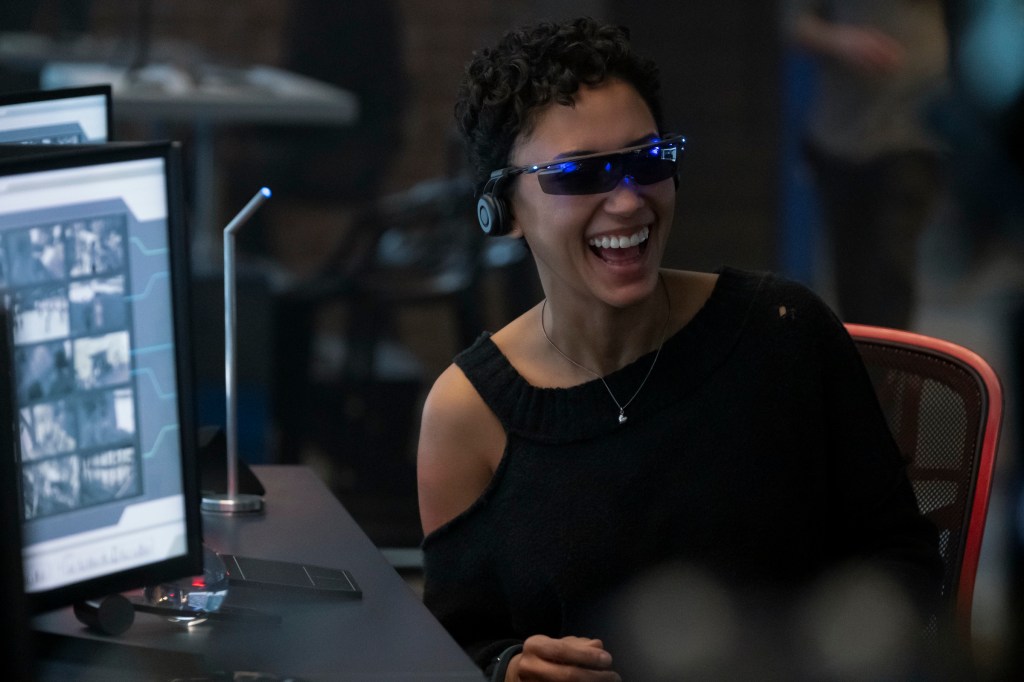 Still, the déjà vu of it all makes the humor play softer than may have been intended. Where Upload is most successful is in depicting a star-crossed romance between Nathan and Nora (Andy Allo), the optimistic customer service rep for the company that runs Lake View. He’s technically involved with Ingrid, and Nora is forbidden from even befriending the “guests,” let alone dating one, yet their attraction is clear from the start. Their attempts to overcome the metaphysical distance between them is one of the few aspects of the show that feels completely current, and not borrowed from another recent series(*).

(*) Even smaller details inadvertently conjure thoughts of other shows. While Nathan is exploring the perks of Lake View, there’s a scene scored to Walter Murphy’s disco classic “A Fifth of Beethoven,” which is the theme song for FX on Hulu’s Mrs. America.

The chemistry between Amell and Allo is strong enough to push aside some sense of overfamiliarity, and to cover for aspects of the show that don’t quite click. (An investigation into whether Nathan was murdered never really gets up to speed, and Ingrid is so cartoonishly awful that she throws the tone of everything else out of balance.) Once you get past the exposition-laden 45-minute premiere episode, the rest of it is a quick and mostly likable binge. And there are periodic moments of inspiration, be they comic (even in heaven, you can ask to speak to a manager) or something more divine.

Among the show’s running gags is that every corporation we know in 2020 has combined with at least one other, so that Nora and her colleagues are asked to encourage Lake View guests to try a new Nokia Taco Bell dish, while the scientists of Oscar Meyer Intel are hard at work trying to prove that the recently deceased can be downloaded back into clones of their old bodies. This itself is not a new joke — the final season of Parks and Rec, set in what was then the near future, did the same thing — but it seems fitting for a series that feels like an amalgamation of so many pre-existing ideas. Spend too much time in the afterlife — whichever version you prefer — and even the miraculous can get old.