Jordan Peele is very much the man of the moment in pop culture. His latest movie, Us, is turning out to be as big a phenomenon as his Oscar-winning debut film, Get Out. Both have attracted audiences in droves to original, non-franchise concepts, which the movie industry keeps claiming isn’t possible anymore. His production company is churning out tons of high-profile projects (including another recent Oscar winner, BlacKkKlansman) and he’s gracing magazine covers. Heck, Peele and former comedy partner Keegan-Michael Key have even gotten the biggest laughs of the various Toy Story 4 teasers and trailers.

For his latest trick, Peele has opted to return to a very different moment in pop culture — to the middle ground between light and imagination, lying between the pit of one’s fears and the summit of one’s mind. He’s decided to take us back… to the Twilight Zone. Peele is not the first to attempt this return voyage, though, and it’s a journey that stretches even his own impressive grasp of the zeitgeist to its limits.

'Candyman': Yes, This Remake Is Brutal and Timely. But It Also Overreaches for Relevance

The original black-and-white Twilight Zone, produced and hosted by Rod Serling, was one of the foundational blocks of TV’s first Golden Age. A weekly anthology, it used science fiction and horror devices to tell parables about life in America in the late Fifties and early Sixties. Alien invasions, post-apocalyptic wildernesses and futuristic cultures were used as metaphors for Cold War paranoia, fear of a nuclear holocaust and the unrelenting pressure to conform. Episodes such as “The Monsters Are Due on Maple Street,” “Time Enough For Now” and “It’s a Good Life” were instant classics that still play well 60 years later, thanks to the craft and gift for iconography that Serling’s team invested into them.

Serling’s Twilight Zone aired on CBS in an age where anthology dramas — in which the cast and setting changed every week as opposed to every season like on True Detective or American Horror Story — were a regular part of the audience’s diet. And the frequent twist endings — say, the dead gangster in “A Nice Place to Visit” realizing he’s in hell, not heaven — were a delightful new device for viewers who were still decades away from seeing an M. Night Shyamalan film.

Peele’s version for CBS All Access is the third revival for television, and the fourth revival overall, counting 1983’s ill-fated Twilight Zone: The Movie, where a stunt helicopter crash claimed the lives of three actors. CBS brought the show back in 1985, without the late Serling, but that incarnation made no more of an impression than a 2002 UPN series hosted by Forest Whitaker. Each new version featured notable creative talent and some episodes that worked very well, but the modern world had moved beyond twists and morality plays. Or maybe the audience preferred shows that let them watch the same characters every week, or felt the title was just too old and creaky, even when the new series tried to deal with contemporary issues.

The hope is that Peele’s presence as both executive producer and weird, Serling-like host, can make the name and concept exciting to modern audiences. But the four episodes I’ve seen are a mixed bag — uneven in the way that the Serling seasons could be, which is the nature of almost any classic anthology, while also mired in some problems we might associate more with Peak TV.

In “The Comedian,” Kumail Nanjiani plays Samir, a struggling stand-up who is advised by a comedy legend (Tracy Morgan) that he’ll connect better with audiences if he talks about people and things from his own life — only to discover that everyone he names in his act is immediately erased from existence. “Nightmare at 30,000 Feet” is an homage to the original’s “Nightmare at 20,000 Feet,” with Adam Scott as a frazzled airline passenger convinced the plane is going to crash, not because he sees a gremlin on the wing, as William Shatner’s character did decades ago, but because a podcast from the future tells him it will. In “Replay,” Sanaa Lathan and Damson Idris are a mother and son who endure a Groundhog Day-style nightmare where they’re pursued by racist state trooper Glenn Fleshler, no matter how many times Lathan’s vintage camcorder is able to rewind them back to before the trouble started. And in “A Traveler,” Steven Yeun plays a mysterious Christmas party crasher at a remote Alaskan town’s police station.

All have their merits. Nanjiani has done dramatic material before (notably in his Oscar-nominated autobiographical film The Big Sick), but that won’t prepare you for his aggrieved intensity as a guy who feels fame and fortune are owed to him, and doesn’t care who has to suffer for him to get it. Director Greg Yaitanes shoots the new “Nightmare” in suitably unnerving fashion, and Scott’s knack for playing anxious everymen is put to effective use. And Yeun is so relaxed, charismatic and yet subtly creepy, it reminded me of how little The Walking Dead let him do over the years beyond look exhausted and/or stoic.

But “Replay” is the only episode that’s effective from beginning to end, and that feels worthy of being compared to the cream of the Serling crop. Not coincidentally, it’s the one that feels by far the most contemporary in its depiction of the many ways black civilians can unwittingly run afoul of white cops, and also how law enforcement misconduct that’s gone on for generations can now be more easily exposed because everyone’s a cameraman. But Selwyn Seyfu Hinds’ script feels much richer than the basic Russian Doll conceit, from the complicated yet unmistakably warm relationship between Lathan and Idris’ characters to the many subtle but unmistakable ways the cop displays his prejudice. 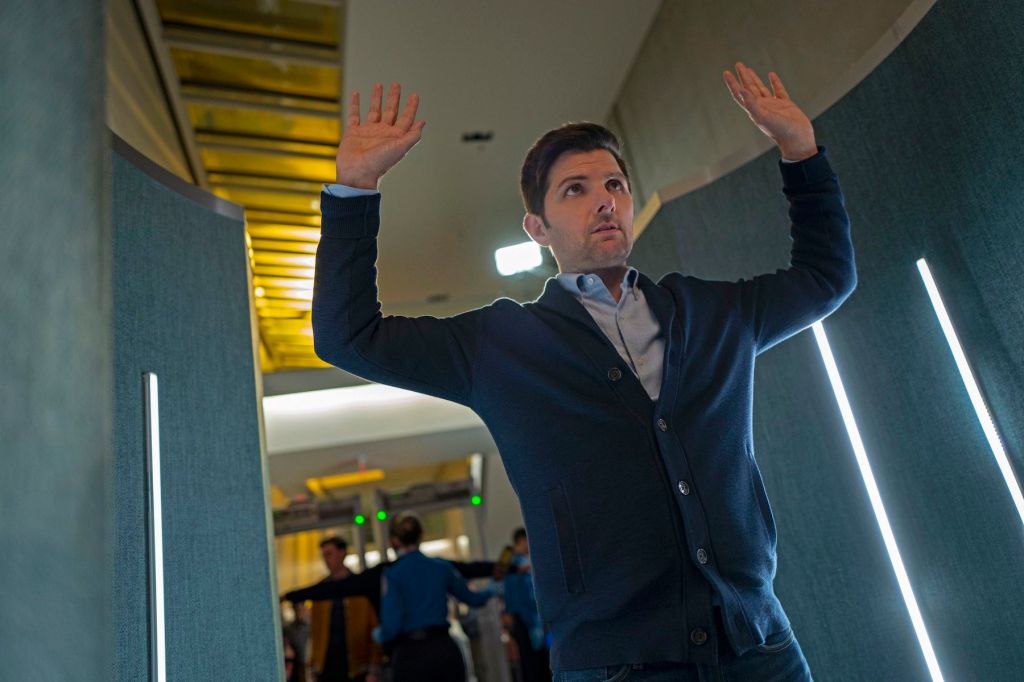 Adam Scott in “Nightmare at 30,000 Feet,” an episode in the CBS All Access reboot of ‘The Twilight Zone.’

“The Comedian” is the longest of the four, clocking in at 54 minutes, when Twilight Zone stories in any era have tended to work best at under a half-hour. (Even Serling tried doing a season of hour-long stories, but the audience rightly protested, and he went back to the old format the following year.) Even though a streaming service doesn’t care about time slots or running times, these science-fiction fables aren’t really built to keep going and going. The episode finds some interesting variations on Samir’s new gift/curse, but it quickly starts to feel repetitive before a gripping ending that leans more on emotion than narrative sleight of hand. “Nightmare at 30,000 Feet” is a relatively brisk 36 minutes, but all the unease that the direction and Scott’s performance generate fizzle with an ending that strives for painful dramatic irony but mostly feels shrugworthy. “A Traveler,” despite strong work by Yeun, Greg Kinnear (as the cocky local sheriff) and Marika Sila (an indigenous deputy who’s always resented her smug, white boss), feels almost as padded as “The Comedian,” while also suffering the “Nightmare” problem of a twist ending that doesn’t sufficiently alter our perception of the story and characters we just watched.

“I am not caught up in the past here,” Scott’s character insists when his history of mental illness comes up during his attempt to save the plane. “This is now. This is real.”

Peele’s show isn’t stuck in the past either, but nor does it feel as real and now as it so badly wants to be. Serling’s Twilight Zone was imperfect too, but it existed in an era with far less competition — both from other ambitious dramas and from its own reputation. Peele’s take doesn’t have that luxury. This Twilight doesn’t feel like a relic, but it also doesn’t feel vital, or at least consistently excellent, enough to justify dusting off the title yet again.

The first two episodes of The Twilight Zone are available now on CBS All Access. “Replay” will debut Thursday, April 11th.