“No one confesses on the stand!” a friend assures the title character of HBO’s Perry Mason remake. The line is meant as a wink at Mason’s previous incarnations, where, in both the books by Erle Stanley Gardner and the Fifties/Sixties TV series starring Raymond Burr, the defense lawyer famously won his cases by putting the real perpetrators on the witness stand and talking them into admitting their guilt. But the line plays less as an affectionate nod to the past and more as an eye roll, as if the new show’s creative team can’t believe that hundreds of past Mason stories, in print and on television, built to that same improbable plot twist.

But then, the entirety of the HBO version feels like it was made by people — Rolin Jones and Ron Fitzgerald as primary writers, with Tim Van Patten as lead director — who weren’t so much interested in Perry Mason as a character as they were in him as a familiar piece of intellectual property they could use as an excuse to tell a Thirties hard-boiled crime story. Which wouldn’t be a bad thing in and of itself, since the audience with a strong attachment to Gardner’s books and/or Burr’s portrayal must be a very thin slice of HBO’s viewership in 2020. But Jones, Fitzgerald, and their collaborators(*) have thrown out the classic formula for a muddle. This new Perry Mason is filled with great performances (albeit not all of them belonging on the same show). It looks incredible (though also occasionally much more gory than it needs to be). But the story’s a mess — at once convoluted and a bit too dull to fill eight hours — and the idea of giving Mason the origin story he never had ultimately proves more trouble than it’s worth.

Barack Obama Charts a Historic Course in New Trailer for 'Obama: In Pursuit of a More Perfect Union'

(*) This includes producers Susan Downey and Robert Downey Jr., the latter of whom at one point was going to play Mason.

The first Mason book, 1933’s The Case of the Velvet Claws, finds him already working as a defense lawyer in Los Angeles with secretary Della Street and investigator Paul Drake. Mason’s creator never showed much interest in his hero’s backstory: As one fan of the novels put it to me, “Gardner was so parsimonious with the details that the only thing we know about Mason’s background is that he’s a Leo.” The new TV show sets out to fill in a lot of blanks. We kick off as 1931 is about to fade into 1932. Mason, played by Matthew Rhys from The Americans, isn’t a lawyer at this point, but a rumpled, hard-drinking private eye who sometimes works, alongside Della (Juliet Rylance), for patrician attorney E.B. Jonathan (John Lithgow). This Mason is a World War I veteran with severe PTSD, living in the ruins of his family’s dairy farm, which is on the verge of being swallowed up by the local airport run by his pilot girlfriend Lupe (Veronica Falcón). The jobs he takes — often in tandem with his wisecracking mentor, Pete Strickland (Shea Whigham) — can be on the seedy side, like snapping blackmail photos of a corpulent movie star with a food-related sexual fetish. He’s the very picture of a film noir protagonist: a cynical embarrassment, operating on the fringes of polite society.

Everything changes, though, when he’s asked to help E.B. with the case of either man’s career, involving a kidnapped and then murdered baby, Charlie Dodson, and his grieving parents, Matthew (Nate Corddry) and Emily (Gayle Rankin). Charlie’s death becomes a media sensation, especially when it turns out the Dodsons are members of an evangelical church led by charismatic radio preacher(*) Sister Alice (Tatiana Maslany). Soon, both E.B. and preening district attorney Maynard Barnes (Stephen Root) have staked their entire reputations on its outcome.

(*) Showtime’s Penny Dreadful: City of Angels also has a female radio evangelist in Thirties L.A., played by Kerry Bishé. Both characters seem based on real-life preacher Aimee Semple McPherson, but the specific shared details of their stories — particularly regarding their relationships with their mothers (played by Lili Taylor here, and Amy Madigan on Penny Dreadful) will raise eyebrows for anyone watching both.

This is a grim, grim story, and that’s even before it begins proving itself accidentally timely with suggestions of widespread police corruption — including one dirty cop who murders a man by, yes, stepping on his neck. At various points, the images of murder victims — baby Charlie in the morgue, a faked suicide with its face caved in, a man being stabbed a few dozen times in rapid succession — are graphic in a way that feels wildly out of proportion to the rest of the series’ visual style. Some actors, like Root, Whigham, and (as the old-fashioned judge presiding over the trial) Matt Frewer are clearly having themselves a grand old time onscreen, while almost everyone else plays their roles as if they’ve been told their salaries will be docked if they let in the slightest trace of humor. There’s an amusing sequence early on about the athletic nature of Perry and Lupe’s sex life, but for the most part, Rhys is asked to play at the saddest and most self-righteous end of his range. (He has a couple of line readings that approach the fury of the classic “YOU RESPECT JESUS BUT NOT US?!?!” scene from The Americans.) 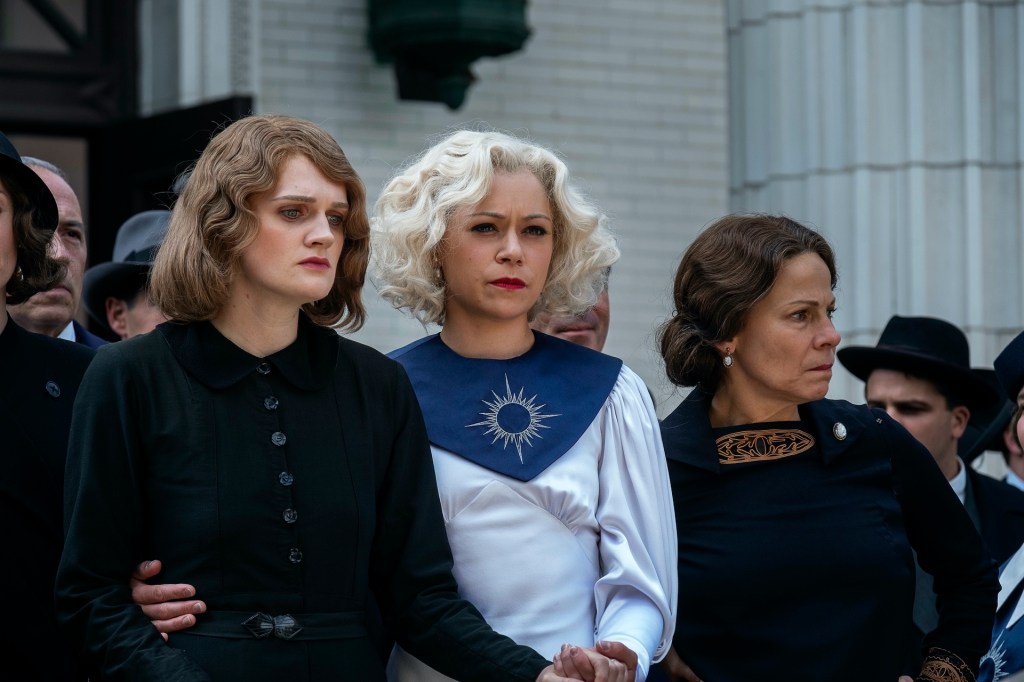 The sprawl of the season allows the creative team to look at the period through a more modern lens. Paul Drake (Chris Chalk, excellent) is now a black member of the LAPD, already soured by all the bent, racist cops he has to work alongside. Several prominent characters are closeted, and much of the church subplot deals with the ways that its wealthy male board members (including a buttoned-down Robert Patrick) exploit Sister Alice’s celebrity and electricity without letting her have any actual authority. (One of them dismisses her plans by barking, “This church can no longer teeter on the whims of hysterical women!”) But the more we learn about the kidnapping, the church, and the forces working against Perry and his allies, the less substantial any of it seems, until the actual resolution of the trial comes across as an afterthought. (And also a betrayal of the character’s history.)

Also fizzling: the point in the story when Mason has to transition from gumshoe to attorney. This should be the meat of the whole thing, but the show races through the actual career change. To explain how he passes the bar, there’s a great in-joke for fans of the traditional take on the character. But barely any time is spent on him fumbling through the basics of the profession once he has to do it in court. It’s a Perry Mason show without much interest in previous iterations of Mason, but also an origin story that somehow loses sight of the most important part of his origin.

Yet the cast is so good as to often overcome the muddled storytelling. The Sister Alice subplot never feels properly integrated with the rest of the season, but Maslany is an utter force of nature in the church scenes. Whigham is so charming and relaxed that, of the half-dozen different shows Perry Mason is trying to be at once, the most consistently successful one is the private dick series he’s at the center of. Rankin is fantastic and compellingly haunted, in a big departure from her role as Sheila the She-Wolf on GLOW. And if the role doesn’t allow Rhys to show off everything he’s capable of, he’s still exceptional at playing the remorseful, indignant notes the writers keep giving him.

There are also few TV directors better suited to revisiting this era than Van Patten, who spent a lot of time in the Twenties and Thirties on Boardwalk Empire (which also featured a prominent character struggling with memories of The Great War). The period recreations are impeccable, the photography lush. The huge scale of the production — particularly some of the church-service scenes, with dozens of extras packed in, elbow to elbow — also feels like something we won’t be getting again for a very long time, even after the COVID-19 shutdown of Hollywood ends.

I’ve only seen a few episodes of the Burr series (though I can hum its great theme song, Fred Steiner’s “Park Avenue Beat,” without prompting), and have never read any of the books. I have no sentimental attachment to previous takes on Perry Mason, and would have been entirely on board with a well-executed modern reinvention. This one, though, is all over the map, more sure of what it doesn’t want to be than what it does. Ironically, one of the most promising scenes in the finale is the one that brings Perry, Della, and Paul Drake closest to elements from those classic stories. It’s as if the original material has such a magnetic pull that it eventually drew in even an adaptation trying so hard to run away from it. (Never mind that many of the show’s more “adult” film-noir trappings are just as outlandish and superficial as anything Burr did.) That scene suggests a potentially stronger second season, but that would require the creative team to embrace the source material rather than acting ashamed of it. Maybe no one confesses on the stand in real life, but it can be fun to see them do it in fiction.