Sometimes, a show gets to lead the zeitgeist, and sometimes it’s just part of a trend. The new Hulu miniseries Nine Perfect Strangers falls into the latter category — though, actually, it’s an example of multiple recent prestige-TV trends.

The series represents the third collaboration between star Nicole Kidman and writer David E. Kelley, after Big Little Lies and The Undoing (the pair have future projects in the works, too). It is the second time Kelley (here with John-Henry Butterworth) has adapted a book by BLL author Liane Moriarty. And it is the second of this summer’s shows, after HBO’s recently-concluded The White Lotus, in which a star-studded cast — this one including Melissa McCarthy, Regina Hall, Michael Shannon, Samara Weaving, and Bobby Cannavale — play wealthy visitors to an exclusive resort. (Vacation shows may be a TV staple for as long as the pandemic rages, since it’s much easier to Covid-proof a production if everyone is quarantining at the hotel where a story takes place; FX just announced it’s ordered a new mystery series set at “a secluded retreat.”)

Heck, Nine Perfect Strangers even overlaps with some good old-fashioned formulaic broadcast television: Kidman’s Eastern European wellness guru Masha isn’t too far removed from Elena Roarke, the mystical hostess played by Roselyn Sanchez on Fox’s new Fantasy Island revival. Masha probably doesn’t have magical powers, but director Jonathan Levine shoots her as if she were an otherworldly being, and Kidman’s performance leans into that alien quality.

So comparisons abound, and Nine Perfect Strangers, unfortunately, often comes up wanting. While it’s a vast improvement over The Undoing and parts of Big Little Lies Season Two, the show falls far short of the emotional insight or satiric wit of White Lotus. It is watchable throughout because of the sheer charisma and talent of its great cast — even if most of the actors seem to be performing in wildly different shows from one another — but doesn’t have a lot to offer beyond star power and lush scenery (with Australia standing in for Northern California).

We open on a slow-motion, almost pornographic shot of a smoothie being blended at Masha’s Tranquillum House retreat, before meeting our title characters. First up is the Marconi family — dad Napoleon (Shannon), mom Heather (Asher Keddie), and daughter Zoe (Grace Van Patten) — who are grappling with a tragedy and essentially there as Masha’s charity cases. Instagram-obsessed Jess (Weaving) and newly-wealthy Ben (Melvin Gregg) need help with their marriage. McCarthy is the presumable Moriarty stand-in, Frances, a novelist whose career and personal life have hit rough patches at the same time. Cannavale’s Tony and Luke Evans’ Lars are both determined to annoy the people around them, but for very different reasons, while Hall’s Carmel is a soft-spoken people pleaser struggling with a lot of not-so-hidden rage. They’re all thrown in with Masha and her two deputies, the cool Yao (Manny Jacinto from The Good Place, sporting an impressive ponytail and goatee) and Delilah (Tiffany Boone), for a 10-day regimen aimed at curing the many things that ail them.

Early on, Jess is reluctant to give up her phone for the duration, asking, “What if there’s a murderer, or a bear?” Shows like this often use murders or other bits of flash to lure viewers into what can otherwise be very interior stories; The White Lotus began with a coffin being loaded onto an airplane in a flash-forward, with the question of who was in there, and why, hanging over everything else we saw. There’s a running subplot here about someone sending Masha threatening texts, but very little comes of it, and it feels as if Kelley and Butterworth aren’t really invested in mashing up genres. That leaves the problems of the individual guests, and Masha’s unconventional treatment methods, as the only real hook, and that material is spotty. Some scenes are emotionally potent. Those involving the Marconis in particular offer a very different (and occasionally musical) Michael Shannon performance than what he’s usually asked to do, and he, Keddie, and Van Patten all work extremely well together. Other scenes meander or half-heartedly go for laughs. As Frances and Tony get under each other’s skin, McCarthy (appealingly low-key) and Cannavale develop strong comic chemistry; yet neither of their individual crises seem to amount to much. 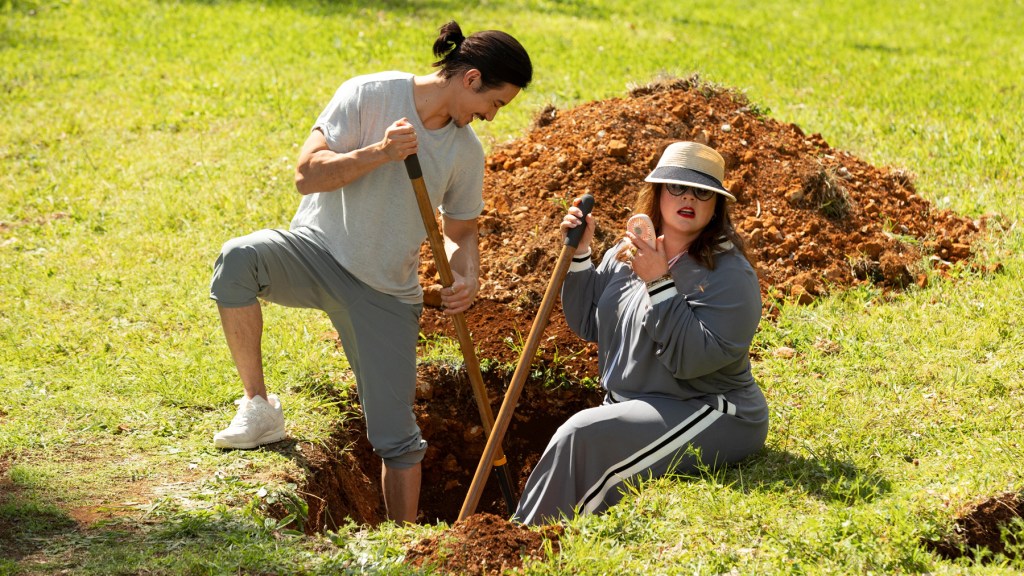 Really, the same could be said of almost everyone in the ensemble. Though the show’s tone veers dramatically depending on who is at the center of a scene, the individual performances are fun and lively enough to frequently cover up how hollow the whole endeavor feels. But Masha is a big problem. Frances describes her as “an amazing, mystical, Eastern-bloc unicorn,” and Kidman looks the part, with ghostly white hair and skin exaggerating the icy blueness of her eyes, and with Masha often entering a room surrounded by a glow from behind. She is meant to be a mystery with a human being underneath, but only the former part comes across, which becomes frustrating the longer it takes to establish what Masha really wants. Does she actually believe she’s helping these people? Is she in way over her head? Does she have an agenda we’re not privy to? Nine Perfect Strangers pushes well past the point where any of these questions might be tantalizing, until Masha seems to exist just as a plot device to generate chaos. Kidman has the range to play both the unicorn and the woman, but nobody bothered to give her the more important part of that equation.

At one point, Jess confesses that she loves Frances’ books, and begins quizzing her about the deeper meaning of them. Frances, distracted with her own mess and feeling grave doubts about her storytelling gifts, suggests that Jess not look to pop culture for her answers. Intentional or not, the moment plays as a meta-commentary on a show that’s not nearly as deep as it pretends to be. But Jess still enjoys the books, and there’s still enough here from a stacked ensemble to provide a similar level of superficial entertainment, even if we just got done devouring a far superior version of this type of story over on HBO.