The title character of HBO’s My Brilliant Friend is Lila Cerullo, a shoemaker’s daughter in a poor neighborhood on the outskirts of Naples in the Fifties. Defying all odds of both nature and nurture, she is a prodigy who masters whatever task she sets her mind to, usually without any outside instruction. As an elementary schooler, she reads Little Women and is inspired to write her own novel. Best friend Elena “Lenu” Greco reads it and is amazed by how naturally Lila articulates all her points.

The adult Elena, who narrates the series, will say of Lila’s book, simply, “It was special.”

So is My Brilliant Friend (it debuts Sunday; I’ve seen six of eight episodes, all in Italian with English subtitles), which roughly covers the events of the book of the same name by Elena Ferrante, the first in her quartet of novels about the long and complicated friendship between Lila and Lenu.

Lenu (played as a little girl by Elisa Del Genio, then as a teenager by Margherita Mazzucco) is simultaneously worshipful and jealous of Lila (played first by Ludovica Nasti, then by Gaia Girace), who is everything Lenu tries to be, only better. Lenu is pretty; Lila is striking, and there’s a sense that any boy who shows interest in the former is only using her to get to the latter. Lenu is smart; Lila is a genius. When the local library gives out prizes to the residents who have checked out the most books, Lenu finishes in fifth place; the top four spots all go to Lila, who has borrowed books under both her own name and her relatives’. Lenu is only as brave as Lila’s presence allows her to be. When they are apart for long stretches, Lenu seems like she is being slowly starved of oxygen, and it’s only when she is back in her friend’s company that she can breathe and thrive again. But that rare air comes with the price of making Lenu feel like she can never be more than second-best.

This is very complicated, subtle emotional territory to explore. But the TV adaptation — directed by Saverio Costanzo, who wrote it with Francesco Piccolo, Laura Paolucci and Ferrante herself — covers the material with beauty and grace. The creative team understands first and foremost that the two girls are products of a specific post-war time and place, and focuses as much on building out that world as on establishing the uneven power dynamics of the central relationship. The neighborhood exists as an ecosystem unto itself, and the series explores and establishes every nook and cranny of the place. It finds unexpected beauty in all the browns and grays, and makes the area seem so disconnected from the rest of the world that it’s startling when later episodes venture out into Naples proper, or to the gorgeous island of Ischia, where the teenage Lenu spends a summer away from Lila.

My Brilliant Friend understands the psychological architecture of the neighborhood as well as it does the physical. There’s a huge cast of characters beyond the two girls — parents and teachers, illicit lovers and gangsters — and it can be dizzying to keep track of anyone outside of the two leads, particularly when the story jumps ahead from their childhood to adolescence. (The resemblance between the two pairs of girls is jaw-dropping, and the series uses it to potent, almost cocky, effect in the moment of transition from one to the other.) But if the many local alliances and blood feuds can be hard to follow, the emotional language of the place couldn’t be clearer. The class consciousness is palpable in how the girls’ parents rage against their desire to continue on to middle school, and there’s a volatility to even the relatively stable relationships. Tempers run hot and over the top, and the buildings are designed in a way that people’s constant threats to jump out a window to end an argument feel disturbingly plausible. When Lenu’s mother is unhappy with the level of discipline Mr. Greco is delivering, she roars, “You don’t even know how to hit your daughter! What kind of man are you?” 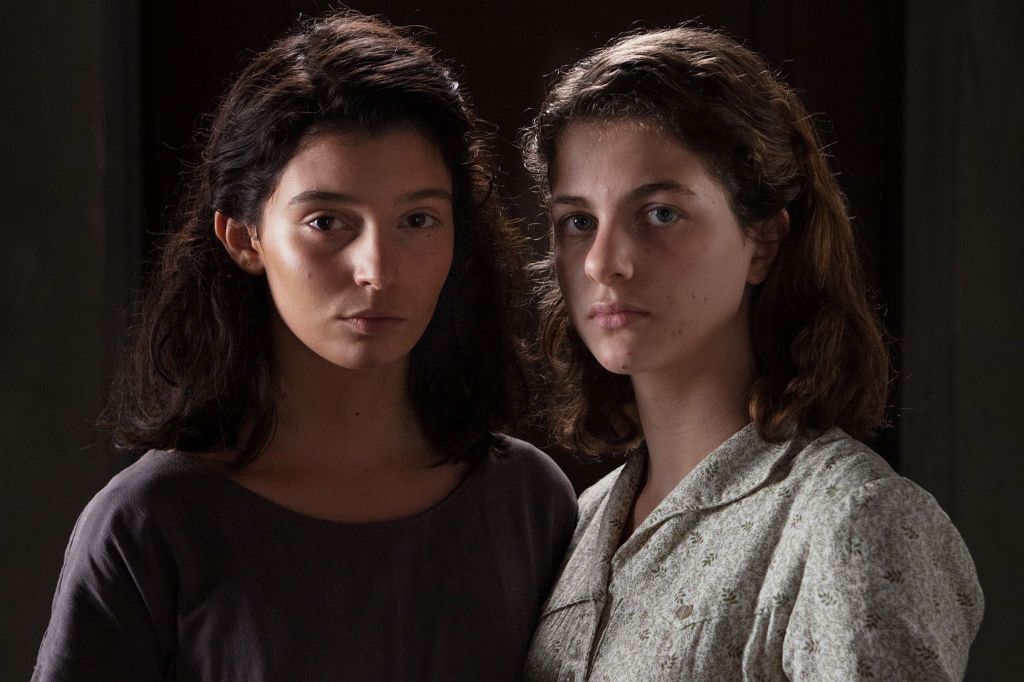 Lila and Lenu as teenagers.

Throughout, we see the world the way the girls see it, knowing what they know. The world seems bigger to them, and thus their emotions always feel bigger, in ways that can make My Brilliant Friend acutely thrilling or devastating. At times, their ignorance can be blissful, like the way a long walk to look at the sea (which neither can recall having glimpsed before, despite Naples being a coastal city) feels like the adventure of a lifetime. At others, they see things more clearly than the adults, like Lila’s steely resistance to the advances of handsome but predatory young gangster Marcello Solara (Elvis Esposito), who seems a great catch to her incredulous parents. And we never lose sight of the double-edged sword that is Lenu and Lila’s friendship. Lenu is often blind to how her circumstances are always slightly better than Lila’s, and Lila in turn fails to grasp how small Lenu feels around her.

“She always did the things I was supposed to do, before me and better than me,” the adult Elena narrates. “She eluded me when I chased her, and at the same time, she kept on my heels to overtake me.”

My Brilliant Friend has elements in common with the iconic HBO dramas like The Sopranos, Deadwood and The Wire: organized crime, profane historical drama, a geographically small but narratively sprawling community. But it uses those elements — potently, at that — as the foundation for the much smaller subject Ferrante and her TV collaborators care about more: an inextricable female friendship, and the way it can feel like blessing and curse at once. This is a great show with a huge heart. Just be prepared for it to break yours every now and then.