The new NBC sitcom Mr. Mayor began life as a 30 Rock spinoff in which Alec Baldwin’s Jack Donaghy, having conquered the corporate worlds of GE and Kabletown, would run for mayor of New York City. Baldwin ultimately wouldn’t agree to a contract, at which point 30 Rock creator Tina Fey and her longtime collaborator Robert Carlock pivoted to another tall, multiple-Emmy-winning NBC institution: Ted Danson. They relocated the story to Los Angeles, because the Cheers and Good Place alum didn’t want to move, and voila, a series was born.

On the one hand, this turn of events was a blessing in disguise. The things that made Baldwin so funny and weird on 30 Rock worked in part because Jack wasn’t the protagonist. Even the more Jack-centric stories tended to be filtered at least a little through Liz Lemon’s saner worldview, which allowed Jack himself to be larger than life most of the time. That version of Jack shouldn’t be the star of his own show. While Baldwin is a talented and versatile enough actor to play a more nuanced version of the character, it’s nice to remember him as an avatar of the late Bush years (and the early Obama ones), especially given how hard it is to bring iconic comedy characters back so many years later. (And considering how often Jack name-checked contemporary Republican politicians on 30 Rock, the show would have no choice but to wade into Trump-y waters, which would be an awkward fit after Baldwin’s run as the commander-in-chief on SNL.) Casting Danson as an entirely new character — Neil Bremer, a retired billboard magnate who runs for office mainly to impress his teenage daughter Orly (Kyla Kennedy) — gives Fey and Carlock a clean slate, and one of the best actors to ever center a TV ensemble comedy.

'Brooklyn Nine-Nine' Season 8: The Complicated Return of a Cop Comedy

On the other hand, the original iteration of Mr. Mayor had some things going for it. Fey and Carlock already knew exactly what made Jack tick, as well as the kinds of material that Baldwin fielded best (as well as the jokes that they should probably avoid with him). And between 30 Rock and Unbreakable Kimmy Schmidt, they’ve proven they can satirize the peculiarities of New York like few in the medium’s history ever have. With Danson, they have a new character, a new star, and a less familiar location. They are starting from scratch in almost every way, yet even veteran comedy scribes like these two need time to figure out what works for this world, these characters, and the actors playing them. 30 Rock took a half-dozen episodes or so to start becoming the classic we remember it as, and there Fey at least had the head start of knowing how she would deliver her own dialogue.

The two episodes of Mr. Mayor that NBC gave to critics are very much a work in progress. In many moments, it’s buoyed by Danson’s fundamental charisma and comic grace, as well as his chemistry with Kennedy (late of ABC’s marvelous, underrated special-needs family comedy Speechless). In others, it’s struggling to find its comic voice and apply it to a supporting cast that includes Holly Hunter as Neil’s rival-turned-ally Arpi Meskimen; Bobby Moynihan as socially awkward communications director Jayden Kwapis; Vella Lovell as Insta-famous chief of staff Mikaela Shaw; and Mike Cabellon as strategist Tommy Tomás.

Danson is delightful, particularly in a story in the second episode where Neil has a bad reaction to some edibles after a photo op at the city’s 10,000th pot dispensary. It’s pretty stock material, but Danson is so willing to appear ridiculous, and such a precise physical comedian — at 73, he’s better at generating laughs from the way he moves, or even stands, than when he played Sam Malone — that it’s funny in spite of the familiarity. But in the process of getting very publicly baked, Neil creates more PR problems for himself than Mr. Mayor seems to know or care how to address.

In that way, it’s illustrative of the multiple stumbling blocks created by the Baldwin-to-Danson transition. The creators are on foreign turf, with very little in the early stories that feels specific to Los Angeles. (Even the dispensary plot could be happening in any of the major cities that have legalized weed in the last few years.) And a reportedly prolonged negotiation with Baldwin, followed by the time it took to retool and relocate the show for Danson, pushed back its premiere to a moment where the idea of a comedy about an unqualified guy taking political office for reasons of vanity plays differently. The pilot explicitly sets the show in a post-pandemic world, though it’s debuting at a real-life moment when Los Angeles’ hospitals are drowning in Covid patients due to systemic failures across multiple levels of government. And now here’s Neil Bremer, clueless about what he should be doing, much less how to get anything done, and mainly wanting to look cool. The timing is poor, to say the least. 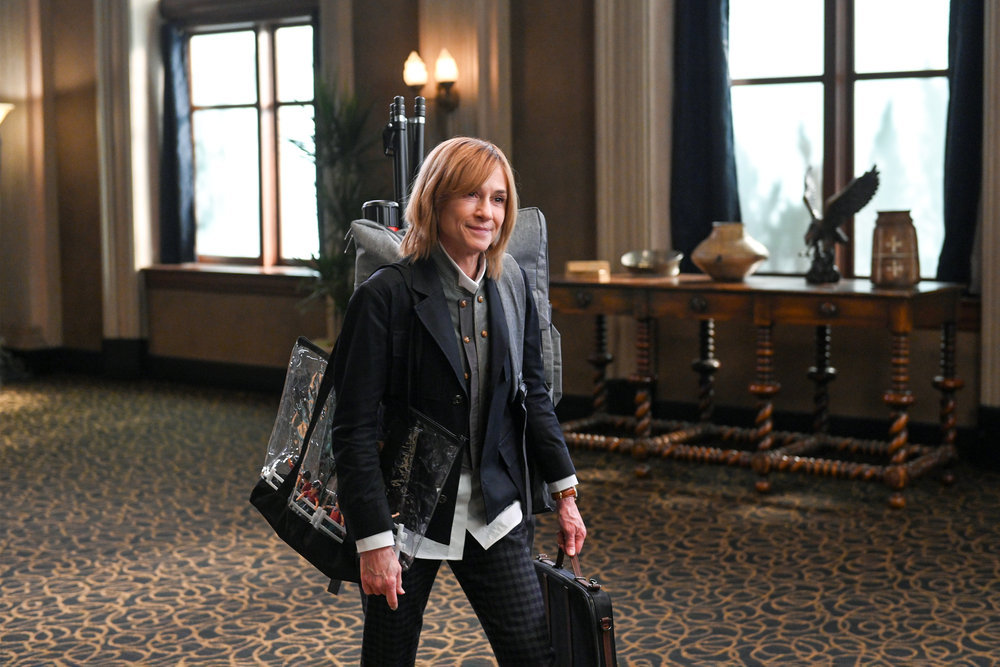 These early episodes also don’t do enough with Danson and Hunter together. It’s not just that putting co-stars with a 12-inch height difference into the same frame is inherently amusing (Veep did it often with Selina and Jonah), but pairing City Hall veteran Arpi with bumbling neophyte Neil provides some necessary humanity to her caricatured wokeness. (Among Arpi’s many policy concerns, Jayden explains, is the explosion in the coyote population, only, “She thinks that the word ‘coyote’ is cultural appropriation, and that we should be calling them ‘mini wolves.’ She also thinks we should pay for their birth control.”)

These episodes play as more conventionally sitcom-y than 30 Rock or Kimmy Schmidt, but both of those shows were saner at their beginnings than at their ends. 30 Rock in particular didn’t really take off until its tone became more absurd. And the more cartoonish Mr. Mayor potentially goes, the less that echoes of our own depressing reality will undermine the jokes.

“I don’t like being told I’m problematic, Tommy!” Neil whines after a spot of bad press. “Well, nobody does,” Tommy replies, “but cancellation comes for us all.” With a collection of talent this impressive, on both sides of the camera, Mr. Mayor doesn’t have to worry about cancellation anytime soon. But, like Neil Bremer behind a podium, the show needs to figure out what it’s doing in this new office, and how to take advantage of its power.