Midway through the second episode of Apple TV+’s sci-fi epic Foundation, mathematician Hari Seldon (Jared Harris) visits the laundry facilities on the spaceship carrying him and his followers to a far corner of the galaxy. Hari has developed the new science of “psycho-history,” predicting the future through statistical analysis, and he has convinced everyone on this ship, and in this room, of two things: 1) The Galactic Empire in which they all live is soon doomed to fall; and 2) Hari and his followers are the only ones who can prevent everyone from being plunged into tens of thousands of years of darkness and strife afterwards. Hari knows the laundry workers believe in his numbers, but he also understands that they are people with emotions and vulnerabilities. So he stops by the laundry to shake hands and give an impassioned speech, encouraging their hopes and dreams while trying to quell their fears. He’s a mathematician, but one who knows what makes people tick.

In that scene, Hari may as well be veteran sci-fi writers David S. Goyer (Blade) and Josh Friedman (Terminator: The Sarah Connor Chronicles), who have been given the daunting task of adapting Isaac Asimov’s Foundation stories, which Asimov wrote off and on from the Forties through the Eighties. The Foundation books are beloved, but they’re also extremely dry, concerned far more with big ideas — particularly what are the most important aspects of building and maintaining a civilized society — than with characters. This is a much easier thing to make work on the page than in a serialized TV version featuring lots of flesh-and-blood actors like Harris and Lee Pace.

So Goyer, Friedman, and company have made many tweaks to Asimov’s text to add humanity to it. Where the original stories had no real interest in women, the show gender-flips several key characters, including Hari’s top student, Gaal Dornick (Lou Llobell); Salvor Hardin (Leah Harvey), guardian of the Foundation’s first outpost on the remote planet of Terminus; and Eto Demerzel (Laura Birn), a trusted advisor to the empire’s rulers. The first season’s story bounces back and forth across many decades, while the story as a whole will span centuries. To give the Foundation a consistent antagonist through so many generations, the show turns the books’ bumbling Emperor Cleon into an endless rotation of three clones, which at any given time includes the elderly Brother Dusk (Terrence Mann), the dominant adult Brother Day (Pace), and a younger version called Brother Dawn (played as a child by Cooper Carter and as a teen by Cassian Bilton). There are also various romances and rivalries built in throughout the first season to pair the show’s abstract philosophical debates with more tangible interpersonal conflict, like a sense of mistrust between the latest trio of imperial clones. And there’s a fair amount of action, particularly in an arc that finds Salvor trying to protect Terminus from a visiting barbarian race. 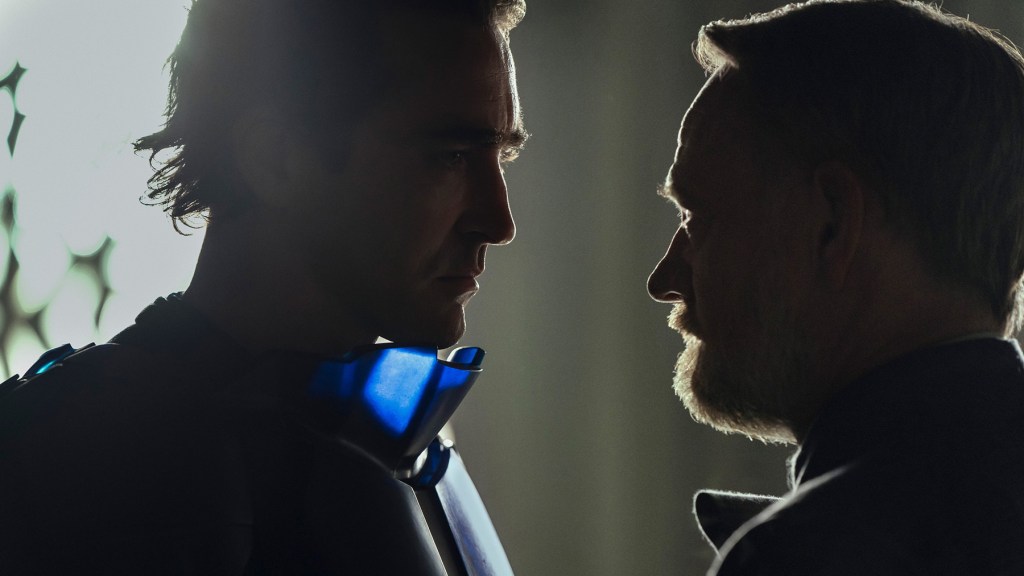 Like psycho-history itself, all of these changes make sense in theory. But none of them quite accomplish what the show’s creative team needs them to. This Foundation is, like the clones’ palace on the capitol planet of Trantor, stunning to look at(*) but ultimately cold and sterile. Despite the cast and crew’s best efforts — and what appears to be an unlimited budget, even by Apple’s lavish standards — this Foundation remains an assemblage of concepts in search of a compelling TV show.

(*) Those impressive visuals also contribute less than one might hope, because so many aspects of the production design resemble things already done in other iconic sci-fi and fantasy projects. Salvor zips around Terminus, for instance, in a slightly bulkier version of Luke Skywalker’s Tatooine landspeeder. The starport orbiting Trantor closely resembles Spacedock from the original Star Trek films. Even a relatively small detail like Demerzel’s triple-bun hairstyle can’t help evoking Rey from the Star Wars sequels.

Part of the problem comes from the basic premise Asimov introduced circa World War II. While psycho-history can predict human behavior on a macro scale, it’s not particularly useful with the micro. So Gaal, Salvor, and other Foundation members are operating in something of an information vacuum, unsure of exactly what they should be doing, and why. This sense of people fumbling around in the darkness hamstrings a lot of the attempts at character development, and various romantic entanglements — Gaal with Hari’s other top student, Rayche (Alfred Enoch), or Salvor with Han Solo-ish trader Hugo (Daniel MacPherson) — feel obligatory. Pace and Mann are both very good in their various bits of entitlement and thunderous rage, even as the two actors essentially keep swapping roles as the years pass. But Pace deserves better than having to elevate yet another underwritten part in an expensive genre production (see also Guardians of the Galaxy) where he wears impressive robes.

Salvor fighting to save Terminus is at once the most engaging part of the first season and the part that feels most removed from the premise. And even those sequences are fairly generic. In the recent subgenre of “hard sci-fi shows with thin characterization,” The Expanse is more interesting at depicting both interplanetary conflicts and the perils of space itself, and it does so on what looks like a fraction of the Foundation budget.

Whenever Gaal finds herself doubting their mission, Hari reminds her to trust in the numbers. But the individual parts of this Foundation equation add up to something that’s very pretty and slightly dull. Asimov’s books have long been considered impossible to adapt. This version is a noble effort that can’t quite solve the problem.

The first two episodes of Foundation are available now on Apple TV+, with additional installments premiering weekly. I’ve seen all 10 episodes of the first season.