'The Crown' Season Three Review: Getting Older Is a Royal Pain - Rolling Stone
×

When an iconic British character is played by a new actor, the easiest way to deal with the transition can be to acknowledge it head-on. On Her Majesty’s Secret, the first James Bond film made without Sean Connery, opens with newbie George Lazenby getting ditched by the beautiful woman whose life he just saved, inspiring Lazenby’s 007 to quip (in a very un-Bond-ian Australian accent, at that), “This never happened to the other fella.”

Season Three of Netflix’s The Crown doesn’t get quite so in-jokey as Olivia Colman and a new cast step in to succeed Claire Foy and the rest of the ensemble from the show’s first two years. But it does address the shift right off the bat. We open with the now middle-aged Queen Elizabeth being asked to approve of a stamp that features an image of her when she first took over the throne. We don’t get a good look at Colman’s face at first, though Foy’s youthful features are clear as day on the stamp. As the two Elizabeths finally come into focus together, the one pushing 40 sighs, “A great many changes. But there we are. Age is rarely kind to anyone. Nothing one can do about it. One just has to get on with it.”

(*) Even characters who were already relatively advanced in years when the series began are played by new actors, like Derek Jacobi taking over for Alex Jennings as Edward, Duke of Windsor.

The disappointment that Elizabeth feels at being confronted with the aging process also nicely sets up the period that The Crown creator Peter Morgan has chosen to study this time around, from 1964 through 1977. The U.K. was ascendant in popular culture thanks to Bond, the Beatles, and the Rolling Stones (none of them mentioned here), but otherwise, Great Britain found itself receding as a superpower. Elizabeth has to adjust to liberal Prime Minister Harold Wilson (Jason Watkins), a statistically-minded leader with no sentimental attachment to the exceedingly expensive royal family. Wilson is forced to devalue British currency to battle crippling economic problems at home, while witnessing American astronauts walk on the moon(*) forces Philip to grapple with the insignificance of his own accomplishments. 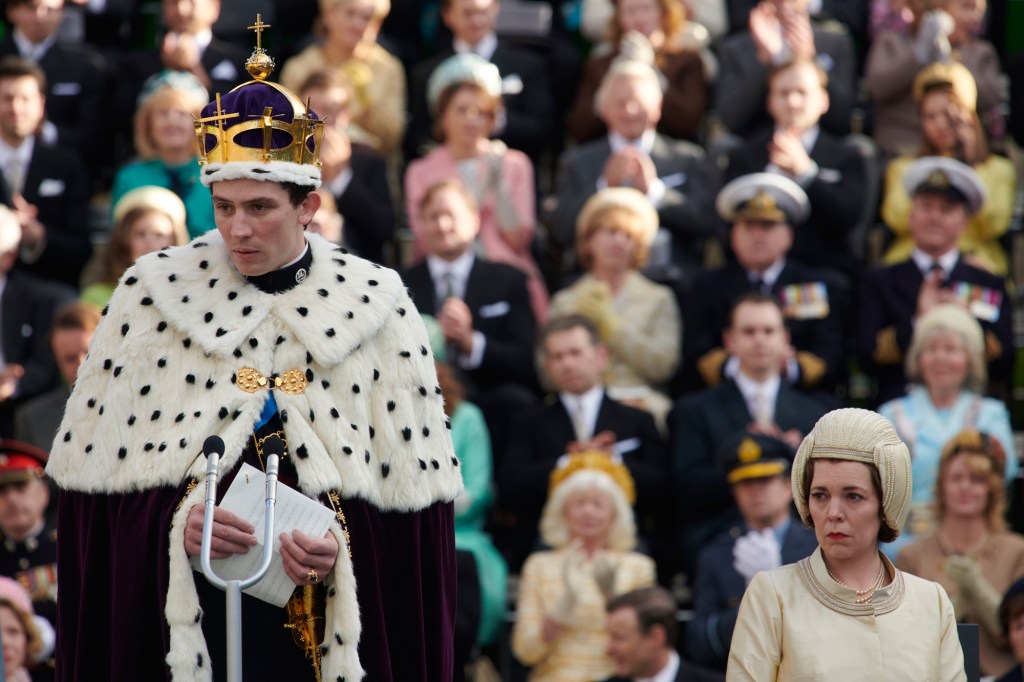 Josh O’Connor as a young Prince Charles in Season Three of ‘The Crown.’

(*) If only they weren’t on competing streaming services, I might hope for a crossover between The Crown and For All Mankind, where Philip somehow gets the U.K. involved in the next part of the space race.

It is, simply, the monarchy itself grappling with the disappointments of middle age at least as much as Elizabeth, Philip, and Margaret are. This makes Season Three more deliberately muted than its predecessors. Crises are smaller, less frequent, and/or unrelated to Elizabeth’s very limited powers as figurehead of state. Instead, it’s the aging royals reckoning with the understanding that this is what the rest of their lives will be like, while teenagers Charles and Anne are only beginning to chafe against the unwanted roles they were born into. One episode, for instance, deals a bit with a would-be coup against Wilson that involved Philip’s uncle, Lord Mountbatten (Charles Dance), but is primarily about how much Elizabeth wishes she could spend her time breeding and racing horses. Charles is sent south against his will to learn the language befitting his title as the Prince of Wales, and he’s later sucker-punched by his family’s disapproval of his girlfriend Camilla (Emerald Fennell). Wales also provides the setting for the season’s most emotional story, episode three’s “Aberfan,” in which a mining collapse claims the lives of more than 100 children. But even that one deals with (historical spoilers ahead) something that the Queen fails to do through her reluctance to pay a condolence visit, rather than a decisive action taken that impacts anyone.

But if Elizabeth and Philip’s lives are more buttoned-down than ever, then Colman and Menzies are just the right actors to interrogate the nuances of their disappointment. Colman can go very big in her performances (as she did in her Oscar-winning The Favourite turn as a very different kind of British monarch), but she’s also a wonder at making powerfully small choices. She’s not doing a Foy impression, but there are several moments — particularly in the coup episode, after Elizabeth receives a phone call reminding her of her lot in life — where it feels exactly like we’re watching the woman Foy’s Elizabeth unhappily aged into. And where Morgan at times fell victim in earlier seasons to looking at Elizabeth only from the outside in, he allows this version more moments of vulnerability shown to us, even as she becomes more opaque to everyone around her.

Part of the reason the show’s prior treatment of Elizabeth could be frustrating was that Morgan had a huge blind spot for Philip. As played by Matt Smith in those seasons, he was an insufferably entitled man-child whom the show found endlessly fascinating for some reason. Menzies’ Philip still has resting rich face, but he’s also made peace with existing in his wife’s large shadow. As a result, he can display just enough empathy and self-awareness in the right moments to make Philip-centric episodes something to look forward to, rather than royal obligations to nobly suffer through.

Vanessa Kirby’s Margaret was a highlight of the early years, and the same is true of Bonham Carter’s more bitter take. There’s just not a lot of her this time around. But her raucous trip to America — a quasi-sequel to Season Two’s JFK episode, this time with Margaret petitioning Lyndon Johnson (Clancy Brown) for assistance — crackles in a way much of the season intentionally does not. And she turns up again for a lively, often very poignant finale that illustrates the perils of having a royal marriage crumble in the public eye.

With Margaret frequently absent, the task of illustrating the pitfalls of living crown-adjacent falls to eldest Windsor children Anne and Charles. Anne is there primarily to comment on what’s happening to the others, but Doherty’s dryly sarcastic delivery is evocative of Kirby’s. And O’Connor is startlingly sympathetic and vulnerable as Charles, to the point where the genuine article might want to hire Morgan as his new PR man. (Though we’ll see if he still feels that way once Season Four introduces Diana, to be played by Emma Corrin.)

This series, even more than most tales of British aristocracy, runs the perpetual risk of feeling like a self-indulgent apology for people born into pretty splendid circumstances. Most of the time, though, Morgan is able to make it through the very narrow window in which the burdens of the crown — both for the woman who wears it and the people near it — feel clearly articulated, and maybe not a fair enough trade for all the money and fancy castles.

At this phase of the story, Elizabeth is more uptight and controlling than ever, especially now that some of her children are old enough to cause her problems in the way only her sister once did. But the job and the many ugly things she has to do in it weigh on her more than ever, which Colman portrays beautifully. It’s not a thrilling time for Elizabeth, or The Crown, but it’s a complicated transition handled quite deftly.