Maeve Millay awakens in a green field, surrounded by blue mountains. It’s a serene, pastoral landscape — the stuff of peaceful dreams. It’s all a simulation, provided by her erstwhile partner Serac to show her what awaits her if she continues to cooperate in his war against her android counterpart Dolores. And it’s beautiful.

It’s also the last moment of peace you get for the following hour. Appropriately titled “Decoherence,” it’s Season Three’s most chaotic and violent episode yet. We’re barely a minute past the heavenly field before Maeve reawakens in a simulation of WarWorld, where she kills off a few dozen Nazis with her bare hands for no apparent reason. Even a host has to blow off some steam.

'Westworld' Season Premiere Recap: Back to the Future

Sometimes violence is fun — that might as well be this episode’s mantra. In addition to Maeve’s rampage through Occupied Italy, the version of Dolores Abernathy play-acting as Charlotte Hale witnesses a Delos board member getting assassinated in broad daylight. She then kills the company’s entire board with poison gas before trying to kill Serac (he was only a hologram at the time, unfortunately); shoots down a double-digit number of guards; and unleashes a giant riot-control robot on the hapless humans who are chasing her down. (Chekov’s droid has been fired, folks.)

Kudos to the show, at least, for making the contours of Maeve’s beef with Dolores (and vice versa) easy to understand, via a head-to-head that takes place within the simulation. Madame Millay feels that storing both the key to the digital paradise called the Sublime — heaven for hosts, basically — and “a civilization’s worth of data” on the park’s guests in one electronic brain is concentrating too much power in the hands of one woman, or robot as the case may be. That the ‘bot in question is also a mass murderer doesn’t come up … but we guess it goes without saying.

She might be placated if Dolores were to hand over the key, of course. But Miss Abernathy can’t do that, not as long as Serac is in the process of destroying every host his minions can get their hands on. But Millay can’t get back to her daughter without the Frenchman’s help. Voilà: a cyborg stalemate. 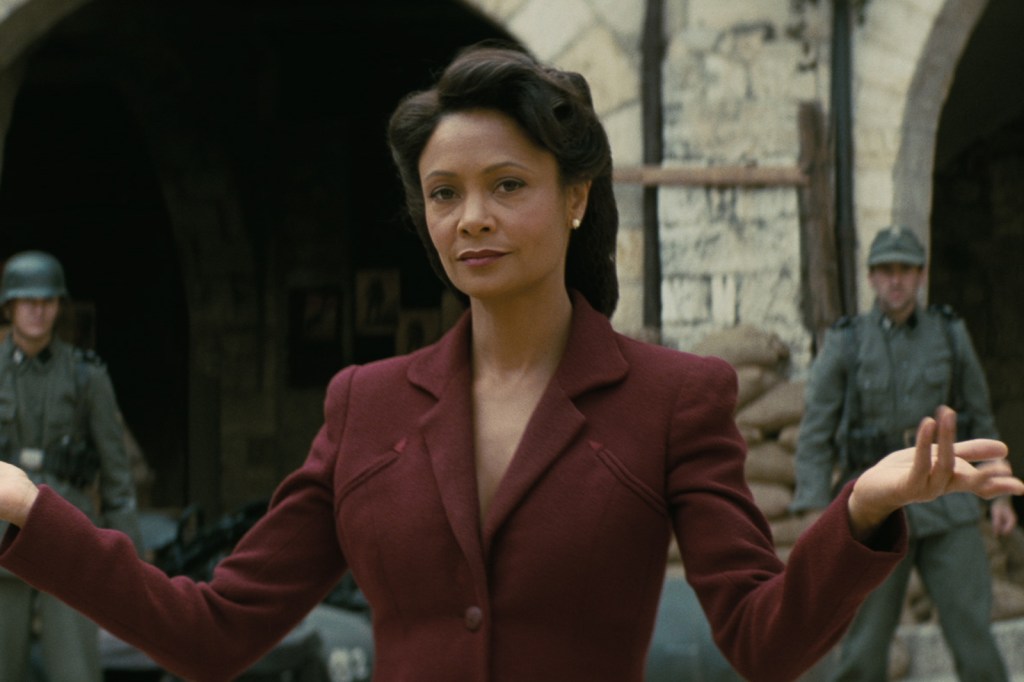 As for the Man in Black, his conflicts are a bit less clear. After really bringing down the room in his insane-asylum group therapy by saying human life on planet Earth is nothing more than “maggots eating a corpse,” he’s subjected to nasty new medical procedure designed to help him confront his fears and guilt. It looks like a cross between A Clockwork Orange‘s Ludovico treatment and Marathon Man‘s rogue dentistry, with the sterile-white art direction of THX-1138 thrown into the bargain.

The end result is a whole new form of group therapy, in which all of our man William’s incarnations — insane and broken mental patient, murderous Man in Black, dapper philanthropist, idealistic young man (via a cameo from Jimmi Simpson), and deeply damaged little boy — hash it out under the watchful eye of his dead father-in-law, James Delos (Peter Mullan). It’s all a hallucination, of course, but it helps our boy solve one of life’s big questions: “Did your life just happen to you, or did you choose it?”

“If you can’t tell,” he mumbles, prior to beating all his former selves to death, “does it matter?” Nature, nurture, potato, potahto, who cares?

Dolores does, interestingly enough. When her Charlotte incarnation complains about the emotions she’s having as a result of her roleplay, Abernathy 1.0 shoots down the idea of shutting them off with the flick of a digital switch. “If we changed ourselves just to survive,” she asks, “would it even matter if we did?” She believes in such a thing as an authentic self, even if it was the result of a computer programmer’s fancy. That self is worth fighting and dying for.

Of course, that’s easy for the original Dolores to say. She gets to stay in her own body, while her clones are sent out to posses replicas of other people — pawns in a game of chess in which she is the black queen. The versions who inhabited the body of Connells, Incite’s security guru, suicide-bombed himself to preserve the mission. “Charlotte” nearly gets blown to smithereens when Serac’s men detonate her family car; her family isn’t quite so indestructible, sadly. It’s a poignant end to an episode in which we see that the modified version of Ms. Hale was actually better to her loved ones than the genuine article ever was. (Indeed, this is how Serac is able to uncover her secret identity: The real Charlotte would never check in with her kid during a corporate crisis.)

A lot more happens: Serac finalizes his takeover of Delos, which rebrands as Incite immediately. He then goes to work eliminating host bodies and brains at the theme park’s “Mesa” HQ. Hector Escaton dies, seemingly once and for all, when Charlotte/Dolores crushes his “pearl” in her hand. William decides that the moral of his life story is “I’m the good guy,” at which point he gets rescued from his simulation by Bernard and Stubbs. (This provides another interesting contrast with Miss Abernathy: She claims there are no real heroes or villains, only survivors.) And there’s a brief hint, via anomalous proteins in his bloodstream, that the MiB may be more than meets the eye.

Add it all up, and what do you get? An episode exciting and jam-packed enough to help us put some of our reservations about the course of the show aside, at least for the time being. Is it still a bit glib with the violence? Yes. Is Serac still a bit too much of a one-note supervillain? Yes. Did a gigantic riot-control robot pulp a bunch of redshirts as part of a war between beautiful murder androids? Yes. Does that last bit trump the rest?