A review of this week’s WandaVision, “On a Very Special Episode…” coming up just as soon as I put a binky in my ear…

The title “On a Very Special Episode…” is a nod to Family Ties, our biggest sitcom influence this week(*). The most enduring legacy of Family Ties is that it made a huge star out of Michael J. Fox as Reagan-worshipping teen Alex P. Keaton(**). But the other thing it’s best remembered for is its Very Special Episodes, where the setups and punch lines had to be put aside so the Keaton family could tackle dramatic real-world issues. In one episode, a young Tom Hanks played Alex’s fun Uncle Ned, who refused to admit he had a drinking problem. In another, the award-winning, Our Town-esque “A My Name Is Alex,” Alex struggles with survivor’s guilt after a friend dies in a car accident.

How to Binge 'WandaVision' Online: Stream the Complete Series Now on Disney+

'WandaVision' Series Finale Recap: The Lyin', the Witch and the Wardroid

(*) The opening credits and theme song, however, are a mix of Family Ties and various ABC family comedies from the late Eighties, most notably Full House, which has the Olsen family in common with WandaVision.

(**) The show was originally supposed to focus on Alex’s aging hippie parents Steven and Elyse, played by Michael Gross and Meredith Baxter. But like Happy Days with Fonzie or Family Matters with Urkel, the audience went so nuts for Alex that the show re-oriented itself around him.

Using that title acknowledges that this is a very different kind of tale for WandaVision than the first three installments. “On a Very Special Episode…” borrows some of the fashions and furniture of the Family Ties era, along with the device of rapidly-aging sitcom kids. But it’s also far more serious than those early stories, because we have context for what’s really happening, as do all the characters outside the Hex(*). And over the course of this chapter, Vision is forced to confront the reality of the situation, and what Wanda is doing both to him and to innocent civilians like Norm.

(*) A clever wink to the fact that Wanda’s powers in the comics were originally referred to as hexes, because they caused bad luck for their victims. Here, Darcy uses it because the field around Westview is hexagonal in shape.

In that way, this also feels like a very special episode because it’s the first one to fully exploit the series’ strange premise. The first three installments were all largely sitcom pastiche for its own sake, with occasional hints of something weirder and darker happening. And last week’s “We Interrupt This Program” had to devote most of its time to explaining both Monica and what was really going on in Westview. This feels like the first proper episode of the story, then, rather than extended prologue. We know all the players, we know the stakes and most of what’s causing these strange happenings. So now there’s still room for recreations of classic sitcom tropes — it’s the Eighties, so Agnes is now a horny neighbor rather than a nosy one — but the show doesn’t have to linger on any of them too long. As a way to acknowledge how different things are, the sitcom scenes are now in wide-screen (albeit in a slightly different aspect ratio from the S.W.O.R.D. scenes), without the bright multicam sitcom lighting that we saw when the show was riffing on Bewitched or The Brady Bunch.

As interesting as those first few homages were to a TV-history wonk like me, this was a much more satisfying balance of tribute and story. Tommy and Billy’s accelerated aging — from infants to five-year-olds, then to 10-year-olds so they could keep their new dog, Sparky — was an acknowledgment that Family Ties aged Andrew Keaton several years between seasons when the writers got tired of telling baby stories. But it also tied into the larger questions of what Wanda is hoping to accomplish here, how she’s doing it, and how people are being hurt.

From the start, things are off, beyond the aspect ratio and image quality. While offering to help soothe the babies, Agnes worries that she has messed up her lines and offers to do another take, alarming both Vision and Wanda. (And either she is losing the ability to “censor” material from her husband, or she’s now too distracted by the demands of the twins to think about doing it.) At work, Vision temporarily restores Norm’s real personality (a.k.a. Abhilash Tandon), inspiring the poor guy to plead for rescue before Vision re-whammies him. Wanda starts using her powers in Agnes’ presence (albeit when her back is turned), and when Sparky dies, the twins beg their mom to bring him back to life. She claims it can’t be done, but as we were reminded last week with a glimpse of Vision’s rotting, Mind Stone-less head, she seems to have already done it at least once. When she briefly steps out of the Hex to confront Tyler and Monica and the S.W.O.R.D. soldiers, she tells Monica, “I have what I want. And no one will ever take it from me again.” That other people are being hurt — like Abhilash being separated from his sister and their ill father — doesn’t trouble her. 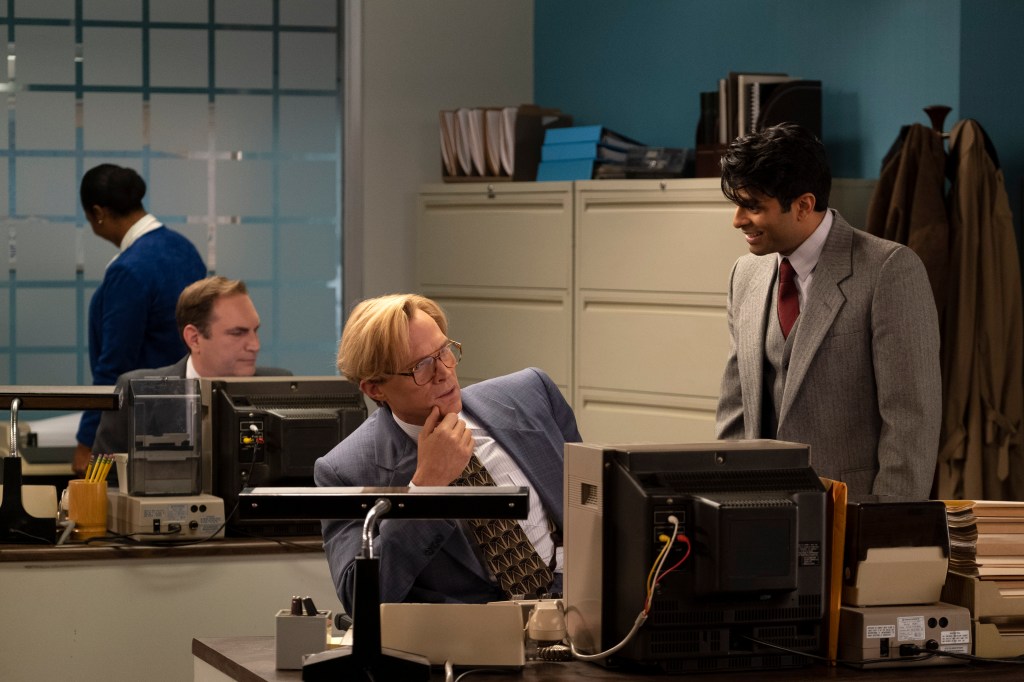 Paul Bettany as Vision and Asif Ali as Norm in ‘WandaVision.’

But the boys’ desire to bring Sparky back, coupled with their earlier question about Wanda’s own brother, results in the dead rising yet again — sort of — as Wanda and Vision’s concluding argument is interrupted by the arrival of Pietro Maximoff…

… or, rather, by the arrival of a Pietro Maximoff. Who may in fact go by Peter. And who is played not by Aaron Taylor-Johnson (who played the character in Avengers: Age of Ultron), but by Evan Peters, who played him in several X-Men movies.

The existence of the two Pietros (or of Pietro and Peter) was an unexpected quirk of the fact that Marvel had sold film rights to the X-Men characters to Fox. Scarlet Witch and Quicksilver began as X-Men villains, then joined the Avengers, and (for reasons that somehow did not apply to Beast, also an alum of both series) were treated as joint property of the two companies. So Peters played a version of Quicksilver in X-Men: Days of Future Past, while Taylor-Johnson put on his track shoes for Age of Ultron. Thanks to Disney’s acquisition of most of Fox, both versions of the character are owned by the same company, which allows for tomfoolery like this.

It’s a clever choice that services both this story and the larger concern that is the MCU. News reports about upcoming Marvel films suggest we may be getting a version of the Marvel multiverse, with multiple iterations of certain characters. (Like Miles Morales hanging with Gwen Stacy and Spider-Ham.) Having Peters appear here as a kind of Quicksilver helps pave the way for other X-Men alums to appear as needed or available. But as an incredulous Darcy notes upon seeing Peters’ face, re-castings are a sitcom staple, from the two Darrins on Bewitched to the two Aunt Vivs on The Fresh Prince of Bel-Air. It may be that Wanda is not, in fact, able to raise the dead, and that Vision either isn’t actually the Vision, or is a special case as a synthetic man — in which case her subconscious desire to bring back her brother extended out into parallel timelines until it found the closest approximation. Or it may be that Vision’s rising questions about their situation, coupled with Monica’s own protests, monkey-pawed Wanda’s wish just enough to give her someone who’s not exactly the guy she wanted. Or it may simply be that someone as clearly in love with the genre as Wanda must be, would also on some level be unable to resist reaching out for her own version of Second Becky on Roseanne.

Whatever is happening, this was by far the liveliest, most engrossing, and purely entertaining episode WandaVision has given us so far. The setup occasionally felt laborious, but this payoff just may prove worth it.

* Elizabeth Olsen’s Sokovian accent waxed and waned over Wanda’s appearances in the MCU films, and it seemed gone entirely on this show. But when she steps out of the Hex to confront S.W.O.R.D., she’s not only wearing her more familiar modern wardrobe, but speaking like someone from Eastern Europe. So in this case, the shifting accent is purposeful, as another sign of how Wanda is throwing herself into these pop-culture roles.

* Wanda and Pietro’s parents are referred to here as Oleg and Irina Maximoff. They’ve actually had lots of different parents and potential parents over their very complicated comic-book history, but Mr. and Mrs. Maximoff have previously always been called Django and Marya.

* When Jimmy and Darcy are discussing Wanda’s power level and how she nearly defeated Thanos by herself in Endgame, Monica very noticeably clams up at the mention of Captain Marvel. Perhaps she blames her somehow for what happened to her mom?

* Something’s not right with Monica’s medical scans or blood work, hinting that she might not be quite as ordinary-human as I suggested last week. The question is whether she was already special, or if Wanda’s power blast changed her in some way.

* The security monitor footage of Wanda breaking into a government facility to reclaim Vision’s corpse is a hat-tip to “Vision Quest,” an Eighties story arc from the West Coast Avengers comic where Vision was torn away from her in a manner nearly as bad as Thanos killing him.

* Finally, I was curious if the show-within-the-show closing credits that briefly rolled over Vision and Wanda’s argument contained Easter eggs about other people in town, or in the larger MCU. Instead, they’re the names of people who either work on the show or have worked on MCU films, albeit with different jobs. So, for example, WandaVision music editor Anele Onyekwere is credited as the sitcom’s technical director.