One would hope that an LAPD officer spewing racial epithets and accounts of gratuitous violence perpetrated on civilians would never be described as “manna from heaven.” Of course, if there were ever a sufficiently cynical and grotesque occasion for this to happen, it would be the lingering murder trial of O.J. Simpson.

LAPD detective Mark Fuhrman was an important witness for the prosecution; in American Crime Story, he’s introduced early on as one of the initial responders to the murder scene on South Bundy Drive, and one of the four detectives who visited O.J. to inform him of the crime. But he was also the officer who had filed for disability and a pension in the early 1980s, citing that working in minority neighborhoods had caused him to “[sustain] seriously disabling psychiatric symptomatology”— the case that initially pushed attorney Robert Shapiro to construct the “dirty LAPD” narrative that would eventually win O.J.’s freedom.

That case was bad enough to make the defense believe that there could be a smoking gun out there somewhere, so they got Fuhrman on the stand to swear that he’d hadn’t uttered the n-word in the past decade. Then, when they found a struggling screenwriter who had 13 hours of tape of Fuhrman expressing just about every bigoted sentiment one could imagine — including some particularly nasty things about high-ranking LAPD officer Peggy York, a.k.a. Judge Lance Ito’s wife — his credibility was shot. Worse, he told stories of planting evidence and framing people of color. Never mind O.J.’s history of domestic violence or the overwhelming physical evidence that painted the Juice as guilty; they had a cop on tape admitting to misconduct. This was the big bombshell in the trial, and the final nail in the coffin the prosecution had built for themselves.

So it’s not surprising, then, that most of tonight’s The People v. O.J. Simpson revolves around the tapes — where they came from, what was on them, what the public knew that the jury did not. And while the show sticks close to the truth, the writers do depart a little from the primary source material, Jeffrey Toobin’s The Run of His Life. Below, five details from Episode Nine, fact-checked and rated on a one-to-five “Glove” scale.

Screenwriter Laura Hart McKinny, who recorded and owned the tapes, just wanted to be left alone
“How did you find me?” shouts a distressed McKinny into her phone, when lead defense investigator Pat McKenna calls her. She explains that the recordings were just research for a screenplay. He asks “How inflammatory are they?” and the writer refuses to answer. “I never asked to be a part of this!” she shrieks before hanging up on him.

According to Toobin’s book, the investigator had been working out of Johnnie Cochran’s office when he got an anonymous tip that these tapes existed. He called her her phone number in North Carolina immediately, and left a message. When she called back a half hour later, McKenna explained the situation and asked for the tapes. “Polite but noncommittal,” Toobin wrote, “McKinny told McKenna her lawyer would give him a call.” Her attorney Matthew Schwartz gave him a call about 15 minutes later, confirmed the recordings’ authenticity, and said that they could probably work something out. Less than two hours after he learned of the tapes’ existence, McKenna had formally requested them from Schwartz — and the screenwriter had helped. The rest was up to the court. (1/5 Gloves)

McKinny had been taping Fuhrman to write a screenplay about all the abuses of the LAPD
While this is never explicitly said in the episode, only implied, they leave out the real reason that she was so interested in this particular detective — and it had a lot more to do with Fuhrman thoughts on Peggy York than it did with his graphic descriptions of police brutality. McKinny had been interested in writing a script about the discrimination females would encounter when joining the police force. Facing political pressure in the 1980s, the LAPD had started employing much larger numbers of women, which didn’t sit well with many of the more traditional officers. “In fact,” Toobin writes of McKinny and Fuhrman’s initial, chance meeting, “[He] told her he belonged to a clandestine organization within the LAPD known as Men Against Women, or MAW, which was dedicated to resisting the encroachment on traditionally male turf.” According to a producer quoted in Toobin’s book, the script never made it, but the 12 sessions she had with him were of the highest quality. “She really got to know her subject, really did her homework. There was just one problem: She didn’t write a very good screenplay.” (3/5 Gloves)

The accusations on the tapes, as Johnnie Cochran puts it in the show, were “tangible evidence” of what “black people have always known”
While it’s true that the LAPD does have documented history of violence towards people of color, one thing ACS chooses not to delve into is an even more twisted aspect of the Fuhrman tapes: that he might have been making up some of the more gory details to impress McKinna. Since she was conducting research for a fictional screenplay, Toobin writes, they “never really dealt with the question of everything he told her — all of his opinions, all of his war stories — was literally true.” He was, in a sense, flirting. “There was a personal dimension to their relationship as well,” Toobin writes. “He delighted in shocking her with his preening, even exaggerated, bigoted braggadocio.” (Even his ex-wife suggested he wasn’t above making himself sound important than he was: “Looking back on it, I think he had a real identity problem,” she later said. “On the outside Mark is very poised, but inside he had the lowest self-esteem you can imagine.”)

After the trial, the LAPD conducted an investigation into the veracity of the stories. According to the New York Times, the department concluded that, of the 29 incidents Fuhrman described in the hours of tape, 17 couldn’t be connected to anything that actually happened, and ”just about everything [he] told McKinny, which could be connected to an actual event, was bigger, bloodier and more violent than the facts.” (3/5 Gloves) 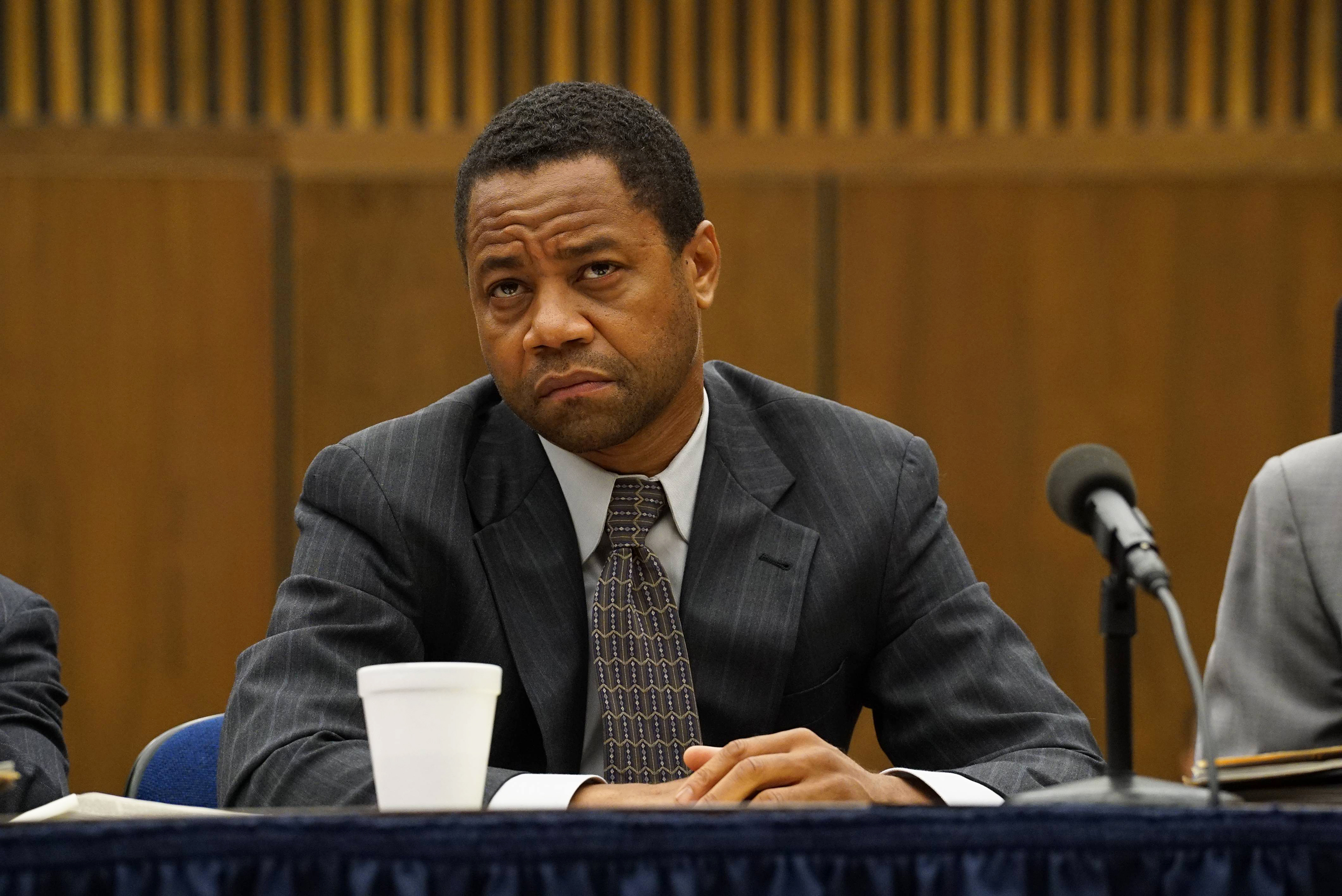 If Judge Ito had stepped down, there would have been a mistrial — and O.J. could have gotten off because of double jeopardy
Because of Fuhrman’s disparaging remarks about Judge Ito’s wife, there was the possibility that she could be called to the witness stands, which meant Ito would have to recuse himself — and both prosecution and defense worried that might mean a mistrial. In tonight’s episode, each side is explained: increasingly nasal prosecutor Christopher Darden suggests that they could start over and “learn from our mistakes.” Clark looks somewhat convinced. Cut to the Dream Team, who are making the same point — albeit they’re not excited about this potential advantage for the prosecution. The defense could try the case in mostly-white Santa Monica, and leave Fuhrman out of it, thus making the tapes completely irrelevant.

But as Ito pointed out during the actual trial, it would have been standard under California law for another judge to simply take over — though at such a late date, and in such a complex trial, that might have been up in the air. In that unlikely turn of events, the result would be a mistrial, and the public would be outraged at this waste of tax-payer dollars, but would it be worth it in the long run? In real life, Clark briefly pushed for Judge Ito to step down, but quickly backed off.

There had been some other moments where mistrial had been mentioned, particularly the months where jurors were being picked off like clay pigeons. So the defense had already come up with a plan: If they call mistrial, they would force O.J. to be set free. “Simpson’s lawyers could argue that the mistrial occurred,” wrote the Chicago Tribune, “because the prosecution forced the dismissal of jurors it considered likely to vote for acquittal.” Similarly, if the prosecution appeared to be forcing Ito off the case because of the incriminating tapes, and there was a mistrial as a result, the defense would have launched into what the New York Times called “all-but-certain defense arguments that Mr. Simpson could not legally be tried again.” Even if they didn’t have sufficient precedent to with the appeal, it would have contributed to the expensive pandemonium that the L.A. citizens were now funding. (2/5 Gloves)

Christopher Darden gets so upset that Ito threatens to hold him in contempt that he  has to ask for his own lawyer while he’s trying the case
On the show, when Cochran defends Judge Ito’s decision to allow portions of the Fuhrman tapes to be played in court, Darden explodes. “You’ve presented a defense that is based completely on lies and deceptions,” he says. “Inflaming the public’s passions in an attempt to put political pressure over his honor.” It’s true that he did erupt during court that day, but the incident where he was held in contempt, and his fellow prosecutor stood up for him? That had happened months ago.

While the tapes first surfaced in the summer of 1995, the incident in question occurred the previous February. Cochran was in front of the court, cross-examining detective Tom Lange about whether or not Faye Resnick was living with Nicole Brown Simpson around the time of the murders. He was trying to establish the theory that the killings were an accidental drug hit meant for Resnick, and Brown and Ron Goldman just got in the way. As he does in the show, Darden jumped up and accused the defense of turning the proceedings into a circus. Ito threatened to hold the prosecutor in contempt. “I should be held in contempt,” he replied, and asked for his own counsel. (Clark even backed him up.)

Both the real and ACS version of Darden eventually apologized, and Ito accepted. “You and I have known each other for a number of years,” the judge said. “And I know that your response was out of character, and I’ll note it as such.” Though, as Toobin pointed out, it was another bit of evidence that the prosecution was cracking: “It is not a good sign,” he wrote, “when a prosecutor feels the need to have his own lawyer in the middle of a murder trial.” (3/5 Gloves)