In earlier chapters of American Crime Story: The People v. O.J. Simpson, we got a sense of who would sit on the jury — or, more accurately, what kind of jury each side wanted. The pool of 24 potential candidates (12 jurors and 12 alternates) skewed heavily to the “downtown” (read: black) crowd that the defense had hoped for. Fifteen were African Americans, six were white, and three were Hispanic — as journalist Jeffrey Toobin wrote, “in a county that is just 11 percent black.” But no matter what their focus groups and gut feelings had told them about who to pick, they had no control over who would sit in judgment regarding the Juice.

Finally, in tonight’s episode, we get to meet the jurors on the O.J. Simpson case, and we see them as the all-too-human individuals they are — just average citizens suddenly tasked with making a monumentally important decision. And we also get to see how the racial divisions that were coming to a boiling point in the city were being played out on a small scale in the halls of the InterContinental hotel in downtown L.A. Here are five details from Episode 8, fact-checked and rated on our patented one-to-five “Gloves” scale.

The jury was constantly monitored for the 266 grueling days they were sequestered
“This is like some kind of experimental torture or something,” cries one juror. “It’s been 8 months,” says another. “Locked up in a hotel, with no TV and no magazines!” (Though at day 124, it would have only been about four months.)  The list of complaints includes only seeing spouses once a week, no drinking, no talking to anyone outside the jury — they couldn’t even discuss the case with their fellow jurors. All these were true: televisions and phones in their hotel rooms had been disabled; no alcohol was allowed; and they were only allowed five hours of unsupervised time with their significant other one day a week, from 7 pm until midnight. Even the court’s attempts at making the experience more bearable often backfired, like a boat trip to Catalina Island, where many of the jurors became seasick on the way home. Or their excursion to a Lakers’ game, where a spectator shouted “O.J.’s guilty!” (4/5 Gloves)

Multiple people had lied on their questionnaires in order to get on the jury — and were later getting kicked off left and right
The jury questionnaire had been intense: 80 pages totaling 294 questions, from “Have you ever asked a celebrity for an autograph?” to “What do you think is the main cause of domestic violence?” It turns out that some jurors had glossed over their past — neglecting to disclose things like the kidnapping of an ex-girlfriend or being the victim of abuse — in order to be part of the case of the century. Some jurors had unknowingly entered incorrect information, like a woman who shared an arthritis doctor with O.J., a physician who was supposed to take the stand. Some made mistakes after selection, like the middle-aged man who was found taking notes for a post-trial book. The show addresses (somewhat) how, as each juror was excused, they helped change the media’s narrative of the trial — from writing their own tell-alls to offering insights to journalists. By the time the trial came to a close, there were only two alternates left. (4/5 Gloves) 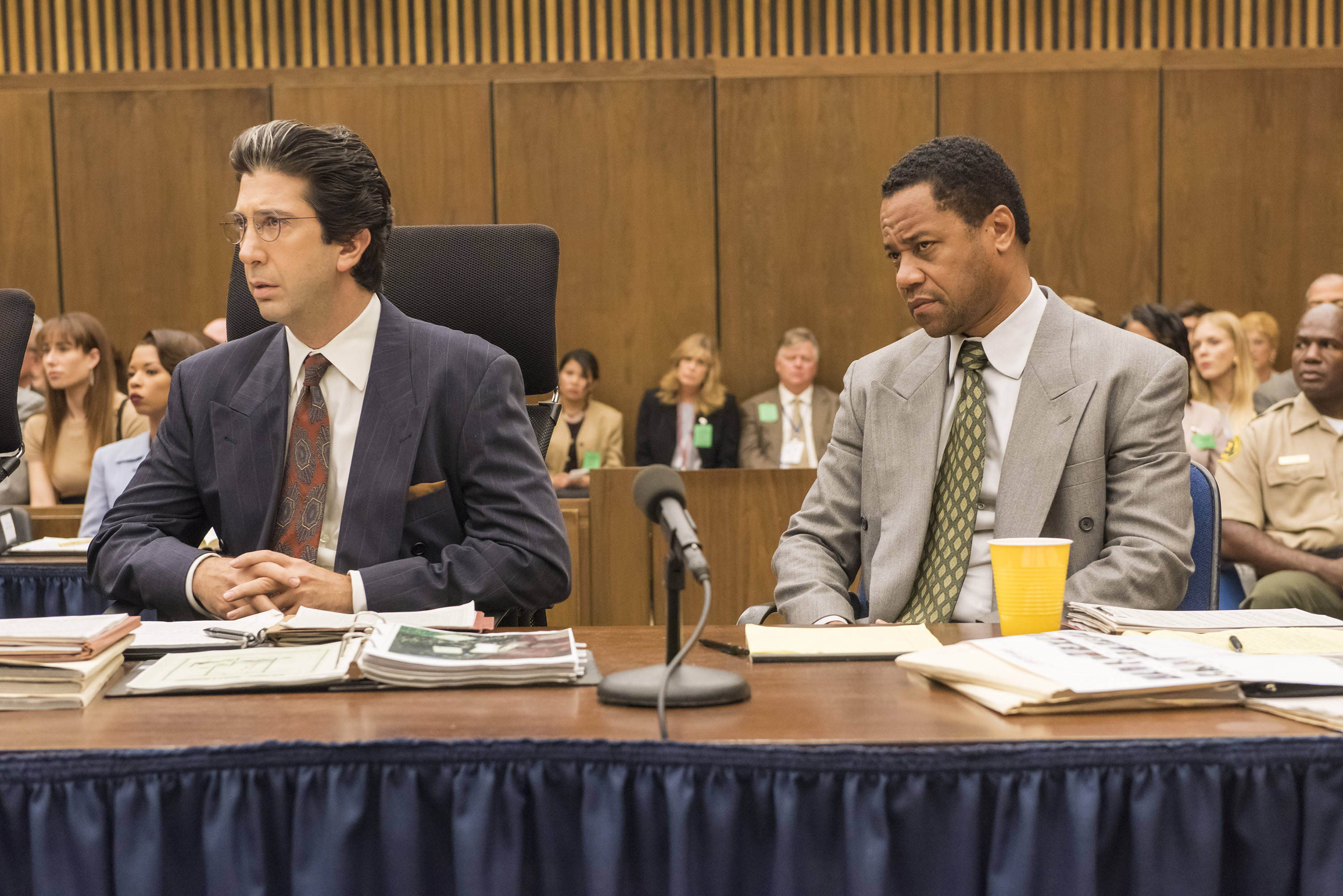 Jurors “revolted” by marching into the courtroom wearing all black — causing such a spectacle that Judge Ito cancelled hearings for the day
Mostly yes. On the show, Tracy Hampton, an African-American flight attendant in her mid-twenties, complains about the treatment of parts of the jury. “The deputies, they aren’t fair,” Hampton tells Judge Ito. “The white jurors get better treatment than us!” She complains, in particular, about a shopping trip to Ross and Target in which, she says, the jurors got more time in Target than the discount clothing chain. “They know that blacks like Ross more!” she shouts.

It’s true that multiple jurors complained about racial mistreatment by the deputies on duty during sequestration — notably Jeanette Harris, who made quite a public stink about it to the media. So, as Toobin writes, three of the deputies were swapped out. The following day, 13 jury members — including all the white and Hispanic jurors, as well as seven African Americans — wrote a letter of protest to the judge, and followed up by wearing black to court to protest the deputies’ dismissal, which they found to be unfair. (The five that disagreed had been supporters of Harris.) The dissenters wore bright colors, to disrupt the scene. “In short, the jury was in chaos, leaving the trial on the verge of collapse,” writes Toobin. So the judge canceled the proceedings for the day and gave everyone a weekend “to cool off” — somewhat ironic, given that the sequestration had lasted so long in the first place because Ito kept delaying the case. (3/5 Gloves)

One juror, so frustrated by the isolation of being sequestered, freaked out, stripped off her shoes and jacket and made a break for it during lunchtime
Nope. Like defense lawyer Bill Hodgman’s mid-trial heart attack in episode five, the writers took some liberties here with the timing of Tracy Hampton’s meltdown. While it’s true that she begged Judge Ito several times to let her go home, she didn’t have a nervous breakdown at the hotel. Eventually Ito just caved, and allowed her to quit. Toobin wrote that “she was rushed to the hospital with an apparent anxiety attack on the day after she left the jury.” But there’s no evidence that she charged through the hotel dining room and was tackled by LA county deputies on her way out. She did, however, appear in Playboy a few months later, so it seems she got over some of her fears by then. (2/5 Gloves)

Defense lawyer Barry Scheck eviscerated the prosecution’s DNA evidence against O.J. Simpson
Yes, and it was even more painful to watch than the show lets on. Scheck was apparently not a snappy dresser — “his entire wardrobe of ill-fitting double-breasted suits probably cost less than just one of [Johnnie] Cochran’s or [Robert] Shapiro’s buttery ensembles,” Toobin wrote — and had a New York “honk” that stood out in the L.A. setting. But he was, according to the book’s author, “the single best trial lawyer” in the O.J. case. By the time he was done cross-examining LAPD criminologist Dennis Fung, who had collected the blood samples, “large purple blotches that looked like bruises began to appear under Fung’s eyes.” Scheck came up with a false theory for some “missing” blood, insinuating that Fung might have planted it at the crime scene — even though the 1.5 milliliters he was referring to was probably just the discrepancy between the standard eight-milliliter draw from a living subject, and the 6.5 that nurses had gotten from O.J. But between this, a blurry photograph, and a blanket that Simpson had apparently touched, Scheck managed to make the prosecution’s main argument — i.e. the overwhelming physical evidence — mean essentially nothing to the jury.

But it’s no surprise that Scheck was able to command a jury about DNA evidence; he wasn’t just any criminal lawyer with a good grasp on this emerging science. Two years earlier, with his friend Peter Neufeld, Scheck had started something called the Innocence Project, a pro-bono legal operation dedicated to getting wrongfully convicted inmates out of prison using this new technology. They were adept at getting the evidence to work for their client, whether the duo were arguing innocence to a jury or a court of appeals. “They trashed [DNA testing] when it implicated their clients,” Toobin wrote. “And embraced it when it excluded them.” (Of course, as another lawyer points out in the book, “They’re defense attorneys — and they’re not always consistent, because they’re defense attorneys.”) But either way, Scheck won over the jury and maybe even Fung, who actually shook the hands of the entire defense team at the end. And unlike on the show, Toobin wrote Shapiro even gave him a bear hug. (3/5 Gloves)