'Ted Lasso' Recap: No Weddings and a Funeral - Rolling Stone
×
×

A review of this week’s Ted Lasso, “No Weddings and a Funeral,” coming up just as soon as I fat-shame a baby to tears…

The title of “No Weddings and a Funeral” is, of course, a nod to Richard Curtis’ breakthrough movie as a writer of rom-coms, Four Weddings and a Funeral. The episode includes a variation on the musical wedding scene from Curtis’ Love, Actually, plus some romantic developments involving both Keeley and Rebecca (and at least sexual developments for Ted with Sassy). But its most important and effective developments have nothing to do with rom-communism and everything to do with Ted and Rebecca confronting painful memories about their late fathers.

For Rebecca, the wound is old but the loss is fresh, as the episode kicks off with her mother, Deborah, interrupting Rebecca’s underwear-clad flirting with Sam to announce the death of Rebecca’s father Paul. All of the episode’s stories spin out of this in some way, whether it’s Roy getting on Keeley’s nerves for refusing to greet the occasion with the proper solemnity, Dani Rojas struggling through his first-ever (and likely only) attempt to wear dress shoes, or, most acutely, Ted having a panic attack while getting dressed for the funeral, because it reminds him of his father’s suicide.

'SNL': Kenan Thompson Steals the Show in All-Star 'What Up With That' Sketch

The episode is first and foremost a Hannah Waddingham tour de force, appropriately debuting only a few days after she won the first of four Ted Lasso Emmys on Sunday night. While I disagree strongly with the “Ted Lasso Season Two lacks conflict” camp, I do think the season has fallen down on the job a bit when it comes to Rebecca. Last year, she was a much more well-rounded and complex character, dealing with the challenges of running the club, her quest for revenge against Rupert, her increasingly agnostic feelings about making Ted her patsy in that scheme, her budding friendship with Keeley, and more. There was a lot on Waddingham’s plate, and she made a meal of it all. With the exception of her week mentoring Nora and running interference with Dubai Air in “Do the Right-est Thing,” pretty much all of Rebecca’s stories this year have been about her romantic life. And even that episode was arguably laying the groundwork for her and Sam to hook up. (Nora even repeats the “boss-ass bitch” line from that episode here upon learning about Rebecca and Sam, conflating Rebecca the businesswoman with Rebecca the love interest.) It’s a flatter and less interesting approach than the character, or her Emmy-winning portrayer, deserve, and “No Weddings” feels like a make-up call for most of that. 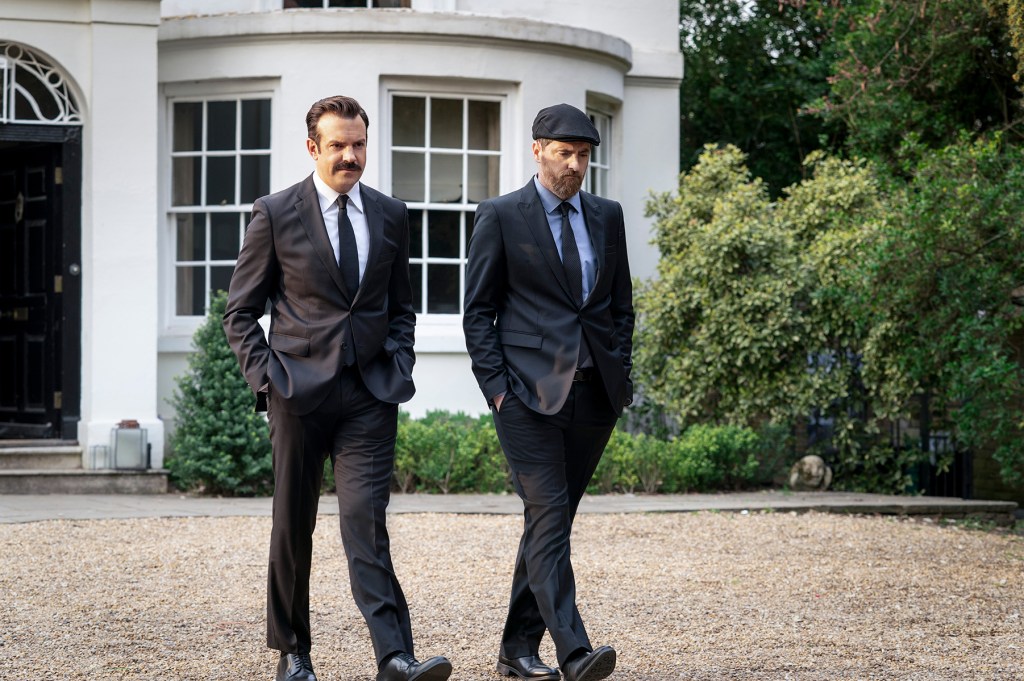 Yes, there’s more of her and Sam — and it’s not great, honestly, because the show seems unwilling to acknowledge the gross power imbalance between them, even though we know them as two good-hearted and well-meaning people — but there’s a lot of other material, too. There’s her struggle to say goodbye to a father she so long resented — and, in the process, a moment of genuine bonding with the mother she’s often struggled to understand, if not outright pitied. There’s a lot of friendship material with her and Keeley and/or Sassy, and even if some of that is about Sam — including the very funny moment where Keeley guesses the identity of Rebecca’s mystery man one question into Twenty Questions — it’s also about the value she finds in these platonic relationships, and the respite the other two women are offering her on such a tough day. And if the season has also been a bit lacking in Rebecca-Ted interaction, we get some prime stuff here — first, with him inevitably saving the day by joining in her tentative performance of Rick Astley’s “Never Gonna Give You Up” during the funeral; and then, with her recognizing that something is awry with her beloved coach, even if he won’t talk about it.

Even when Rebecca and Ted weren’t physically together this week, they were emotionally. The episode’s high point comes right before the funeral begins. Ted is still in his apartment, an utter wreck being tended to by Dr. Sharon. Rebecca is in a side room of the church, alone with her mother after the vicar has shooed away Keeley and Sassy because the woman were laughing too loudly. Sharon prompts Ted to talk about his father’s suicide, while Rebecca tells Deborah about the day she discovered Paul was being unfaithful. What starts out as two separate scenes becomes one, with Rebecca and Ted continuing each other’s sentences, the two stories overlapping enough in content — innocent teenagers opening doors to see their fathers in ways they never wanted to — to feel as if they belong together, without the pain of one interfering with or undermining the other. It’s well assembled, and spectacularly played by both Waddingham and Jason Sudeikis. (Put money on both of them choosing it as their submission episode for next year’s Emmys.) And it in turn makes Ted’s musical rescue of Rebecca feel all the more meaningful, because we know what binds them together, even if they’re oblivious. It’s a beautiful love-story moment, even if these two are not — and, narratively, never should be — romantic lovers.

The rest of the episode is a mixed bag, albeit with some potentially big developments in the margins. Dani Rojas’ difficulty wearing leather shoes feels like the kind of running gag that would have been cut (or at least trimmed down to one joke rather than several) if episodic length was an issue. It’s hard to tell if Rupert’s re-emergence signals more trouble down the road — my crackpot theory is that he is giving away his new wife’s shares in the club to Richmond because he is planning to buy another team, and perhaps steal away Nate (to whom he whispers immediately after saying goodbye to Rebecca) as his coach — or if they just brought him back to remind us how Rebecca responded to an adulterous husband versus how Deborah did. And while Jamie’s declaration of love to Keeley does add some additional conflict for the season’s home stretch, it feels like false conflict, because every bit of tension between Keeley and Roy this season has been resolved fairly quickly, and in ways that leave them seeming even deeper in love than before. There’s no real indication that Keeley would want to jump ship, even for a Jamie who seems like a genuinely better person. Television writers often refer to this kind of story as “schmuckbait,” because no one should fall for it. And if Keeley does wind up seriously considering Jamie, then the Ted writers have not been doing a great job of setting that up so far.

But the Rebecca and Ted scenes this week were pretty great, even before they Rickrolled the funeral together.