A review of this week’s Ted Lasso, “Do the Right-est Thing,” coming up just as soon as I’m so dehydrated, I look like one of them trees from a Tim Burton movie…

“Do the Right-est” thing is simultaneously Ted Lasso at its most heartwarming and Ted Lasso at its silliest. It’s an episode in which the team has several opportunities to bond through a common, noble cause, and also one where Ted unleashes his ridiculous alter ego, Led Tasso, before trying to explain Chuck E. Cheese to Dr. Sharon. Like Ted with his other personalities, it contains multitudes.

Let’s start with Led Tasso, which is both the dumbest and funniest thing this show has done to date. When Sam and the other players unsurprisingly react poorly to Jamie’s return to the club, Ted decides to bust out a familiar sports management tactic: making the players come together in their hatred of a coach or other authority figure. He just takes it to ludicrous extremes, shifting into a character whose temperament is as opposite to Ted’s as the spelling of Led’s name. And apparently, to become Led Tasso, he has to more or less go into a fugue state, relying on Coach Beard to snap him out of it when the moment’s right, like he’s the hero of a cheesey Sixties sitcom who has just been hypnotized. It is completely, utterly stupid. But it works a little as a motivational approach, since Jamie is the one to call Ted out for behaving that way, which wins the team villain a few brownie points from the guys. And it works very well as comedy, because Ted is just so inept at being a jerk. Led Tasso is like a little kid’s caricature of how a mean coach would behave, flipping over tables, demanding absurd exercises (the players have to bend down and touch each other’s toes), making the players run lap after lap, etc. Jason Sudeikis has really toned down the character’s sketch-comedy leanings from the original NBC Sports promos, and it’s been to the Apple series’ benefit. But Led Tasso was Sudeikis going back into full SNL mode, and it’s an idiotic joy to behold for a few minutes.

Alan Sepinwall: How Do You Solve a Problem Like the 2021 Emmys?

(*) Sassy’s return gives us a chance to revisit her hookup with Ted last season, with Rebecca learning that Ted is just as loquacious and eager to please in bed as he is everywhere else in his life. 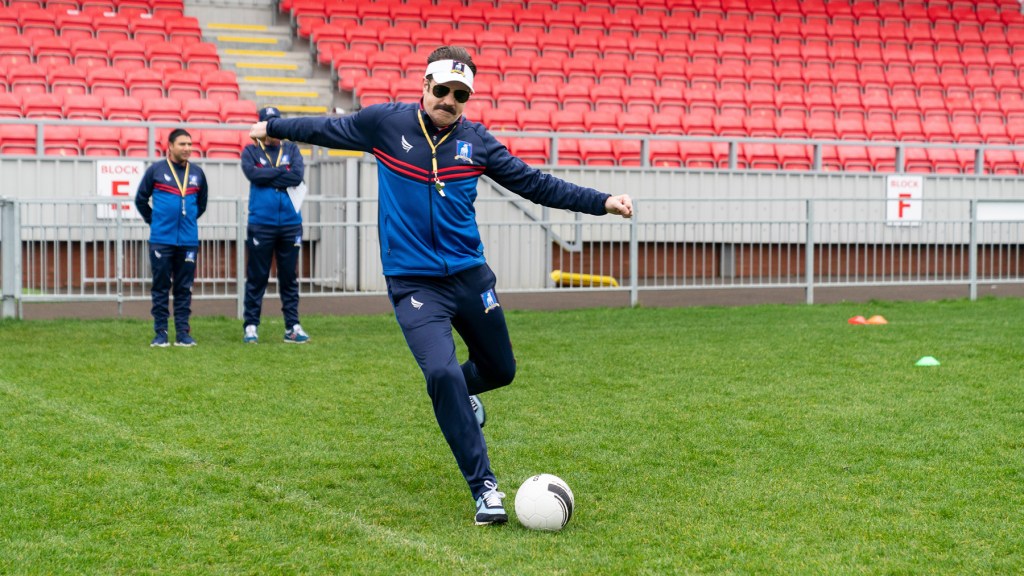 Though Isaac has been promoted to Richmond’s captaincy since Roy’s retirement, it seems clear that Sam has become the club’s true emotional leader. Ted singled him out in his press conference in the season premiere. Sam was the one who walked out when he thought Ted was bringing Jamie back, and he’s the one who silently signals to Ted after a Festivus-style airing of the grievances fails to make anyone happier that Jamie is back in the locker room. It’s Sam who responds to learning about Dubai Air’s malfeasance in his native Nigeria, which in turn brings the whole team together like never before. He’s excited to be chosen to do the week’s promo for the club’s chief sponsor, but when his father scolds him for not looking more closely into the company, he places principle over money and celebrity, twice over: He asks Rebecca to drop him from the ad, but that doesn’t feel like enough. So he covers the Dubai Air logo on his uniform with athletic tape, inspiring his fellow Nigerian teammates to do the same, then Jamie, and then the whole roster. It’s a lovely moment, especially vis a vis Jamie, who recognizes not only an opportunity to ingratiate himself with a bunch of guys who hate him, but the true value in standing up for one’s teammates.

It does create a sticky situation, though, for Rebecca, who had just saved Sam’s spot on the roster after Dubai Air’s chairman asked her to cut him. Nora learning about business from her and Keeley (who now has a side hustle doing PR for Bantr, a text-only dating app) is an amusing bit, but their conversation also prompts Rebecca to embrace her noblest instincts, Ted Lasso-style. “Sometimes, you have to do the right thing, even if you lose,” Nora tells her. And the club does, indeed, lose. The cliché would be for Sam’s protest, and Jamie’s support of it, to be the thing that finally gets Richmond its first win of the season, but the opposite happens. Yet the players are excited, not just for their newfound closeness, but because anything that broke the streak of ties feels like a good thing to a group of superstitious jocks.

Rebecca, of course, has a level of privilege that allows her to stand by Sam. She was already prepared to destroy the club last season, so she can obviously afford it if Richmond just implodes financially. But given the dire straits of the budget — as she discusses with Nora, they are now paying big-league salaries for a team that’s stuck in the minor leagues — publicly showing up the chief sponsor seems like a big problem, no?

If so, it’s a problem to be dealt with later. And if Dubai Air keeps misbehaving, maybe Led Tasso can come back to yell at them.