A review of this week’s Succession, “Lion in the Meadow,” coming up just as soon as there are goons and stooges and roughjacks there to administer a beating…

“The Beatles put out some of their best shit when they were suing each other, right?” Kendall argues midway through “Lion in the Meadow.” This, like a lot of Kendall’s bold pronouncements, gets some crucial details wrong — Paul technically didn’t sue John, George, and Ringo until after Abbey Road had been recorded, though he had already hired his own management and legal teams while making that final album with them. (Also, the individual Beatles all worked on some wonderful solo records during the lawsuit period.) But like a lot of Kendall’s bold pronouncements, it sounds pretty good in the moment, and is more applicable to this fab show than to the Fab Four.

'Succession' Season 3 Is a F**king Killer

Many comparable prestige dramas would build seasons at this stage around a new antagonist arriving to cause trouble for the Roys. Succession does not lack for opponents outside the family circle, including this week’s introduction of Adrien Brody as swing-vote minority shareholder Josh Aronson. It’s not hard to imagine a version of this season where Josh swooped in, started causing chaos, and forced all the regulars to dance to his tune for a while. That could certainly be fun, especially given how easily Brody slides into this world(*). Ultimately, though, Jesse Armstrong and company understand that the Roys are the whole shebang. Outsiders can crash the party to stir up trouble, but they’re ultimately tools to pit the main characters against one another. Heck, Josh isn’t even on camera for much of this episode’s climactic sequence, as he’s trying to figure out the correct path back to his vacation home while Logan is experiencing a medical crisis. He’s a plot device, there to force Kendall and Logan to play nice for a few hours, even when they want to kill each other. And on the long beach-trail walk back to Josh’s place, Kendall nearly accomplishes that, simply by antagonizing the hateful old man who’s not physically up to the trek.

(*) He’s also quite tall by actor standards, and we know already how much Armstong enjoys putting Kendall and/or Logan into frame with men who loom over them.

The threat of Josh backing Sandy and Stewy’s hostile takeover bid is not an empty one, as we see by the episode’s end when he’s hugging Stewy while Kendall is on his way out. But its importance here is simply to create a circumstance where father and son will have to be in each other’s presence and act like they care. It’s all a show, which even Josh seems to recognize while he enjoys the leverage this moment has given him. The only one who begins mistaking the pantomime for something substantive is, of course, Kendall. There’s a moment on that long walk to nowhere when Logan describes Kendall as “a good kid,” maybe even the best of his four offspring and the one who could inherit the empire one day. These are the sentiments Kendall has waited an entire lifetime to hear his father express, and they have such power over him that for a brief moment, he seems to convince himself that they’re true. Then a beat later, Josh steps away to take a phone call, and it’s clear from the look on Logan’s face that any connection between the two was entirely illusory. (Logan would probably be surprised, or at least disappointed, to learn that Kendall could have believed otherwise.) And it’s only after that cold slap of reality that Kendall really starts needling his dad, well after the point that it’s clear Logan is in genuine physical distress. The whole sequence is another great Cox/Strong duet, and simultaneously a reminder of how far apart the two have become during this war — and how desperately Kendall just wants to be the Number One Boy again. 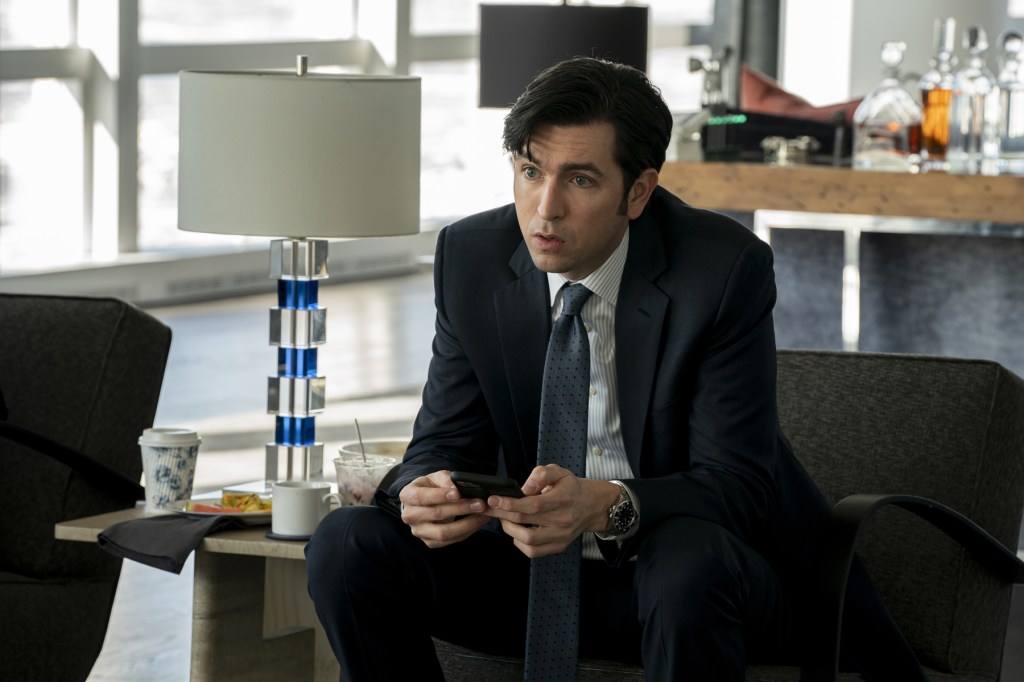 While Kendall and Logan are off trying to put out this latest brushfire, the rest of the hour offers a mix of the Roys versus each other and the Roys versus the outside world. With Roman, it’s a bit of both, as he tracks down the man who was paid during Kendall’s “ironic” New Orleans bachelor party bacchanal to have Kendall’s initials tattooed on his forehead. This is Roman again trying to make his brother “Woke-ahontas” look bad, but as Gerri, the adult in the room, has to point out, the story makes Roman (and thus, the company) look just as bad. Their former victim comes out of this with a million dollars, but also a reminder of how easily he can be made a pawn in the game of two rich assholes who don’t even view him as a human being.

Tom and Cousin Greg, meanwhile, find themselves in very different circumstances, despite how closely they’re linked to the cruise ship mess, and each other. Tom is researching prisons (he’d prefer “the Jewish jail” with the kosher vending machines), while Greg is the belle of the ball, since Logan needs him back on his side. As is often the case, there’s a menacing homoerotic subtext to how Tom talks to and threatens Greg, here telling him the story of Emperor Nero and Sporus, the boy whom Nero had castrated and dressed up as his late wife. Tom does not get his desired wrestling match with Greg, while the real winner is Logan, who convinces Greg to ditch Roger Pugh and sign on with the Waystar legal team. Greg is in general not great at understanding leverage or potential rewards — recall that he walked away from a potential quarter-billion inheritance from Ewan in the misguided belief he could do better sticking by Logan — so odds are this is another bad call by him.

And while Tom is busy learning how to make toilet wine, Shiv is getting her hands dirty as Logan’s current favorite. She fends off Connor’s attempt to take a high-level position in the company while waiting to run for president again, then gets to work turning ATN against the president as punishment for “the Raisin” not being sufficiently loyal to Logan. When ATN executive Mark pushes back and threatens to go public on Shiv’s attempt to dictate editorial content, Shiv bluntly sums up the Roy ethos: “The thing about us, Mark, and you should know this by now: We don’t get embarrassed.”

That utter lack of shame allows the Roys (and their various real-life counterparts) to get away with almost anything in their dealings with an outside world that is still to some degree following the old rules of decorum. And that in turn makes the moments when they turn against one another feel all the juicier, because who can sink as low as one of the Roys other than another member of the family?