A review of this week’s Succession, “Retired Janitors of Idaho,” coming up just as soon as I let the rabbit eat a bagel…

Succession is a comedy.

Yes, it submits as a drama at every awards show, and has done quite well with that strategy. But some of that is about eligibility rules and some of it is about strategy (the Emmy drama categories have become much easier in recent years as the industry’s focus has shifted to miniseries), in a kind of gaming of the system that would no doubt please Logan and the other Roys. While Succession can be very potently dramatic — as we saw only a few weeks ago with Kendall’s sad trip to the server room — it is fundamentally a very dark, but unmistakably funny, comedy about bad people with far more power than they know how to properly use.

'Succession' Recap: It's Kendall's Party, He'll Cry If He Wants To

This is apparent throughout the rollicking “Retired Janitors of Idaho.” The episode finally brings the multiseason hostile takeover arc to a head by putting all the key players into the same hotel for a Waystar Royco shareholders meeting, and a potential vote on whether the Roys would maintain control or cede it to the Sandy-and-Stewy faction. There are some serious moments sprinkled throughout, particularly in showing the state of Logan’s relationships (or lack thereof) with Kendall and Shiv, but mostly it’s a superb farce that humbles and confuses all the players involved at various points.

The cleverest thing the episode (written by Tony Roche and Susan Soon He Stanton, and directed by Kevin Bray) does is give us a fairly omniscient view of the proceedings. We don’t know whether Sandy is still in full command of his faculties or, as Roman suggests, just functioning as daughter Sandi’s “meat puppet.” But beyond that, we see every key move that is made by each faction, and thus have far more information about why everything is happening than the people involved do. As a result, we get to see how much of the Roys’ success here — and, it’s implied, throughout Logan’s reign — is a result of blind guesswork, luck, and sheer stubbornness.

We see, for instance, that Kendall convinces Stewy to push for a settlement by warning him that Logan wants to take the company leadership question to a vote. But when Logan hears about a potential settlement offer, he assumes the other side knows something he doesn’t and grows paranoid, rather than understanding the good fortune his prodigal son has given him. Later, we become aware much sooner than any of Logan’s children that his recent physical difficulties — which are revealed to be the result of a urinary tract infection — are beginning to impact his mind, too. As Shiv is on the verge of closing the deal with Sandi, an agitated and confused Logan whispers “Fuck ’em.” Like Logan did earlier, Shiv and Gerri and the others assume Logan knows something they don’t, and try desperately to parse both the meaning and the motivation of the phrase. Instead, they are just risking the entire future of the family empire on the erratic behavior of a sick old man who has become — in a phrase unlikely to leave the lexicon of anyone who watched this wonderful lunacy — “piss-mad.” And by the time they recognize that Logan is not in his right mind, they are already careening along the edge of the cliff with him. At that point, all they can do is loudly and profanely support his delusions, as we see in the hilarious moment when Roman explains to a bewildered Kendall, observing a deranged scene unfold, “That is an imaginary cat. Now can you please fuck off?”

There are ironies aplenty in this situation. The first is that Logan has only just set in motion a smear campaign against “the Raisin” suggesting that POTUS is the one not in command of his mental faculties. This results in the Raisin opting not to run for a second term, which is good for some members of the family — like Connor, who can keep his idiotic longshot campaign going — but potentially bad for the company as a whole, since the Raisin’s successor may not be quite as accessible or pliable. The second irony is that, again, it’s unclear whether Sandy is in his right mind either, or fully a prisoner of his ruined body, leaving this battle for global media supremacy in the hands of two men who are well past their primes and fiercely clinging to power only because they can. 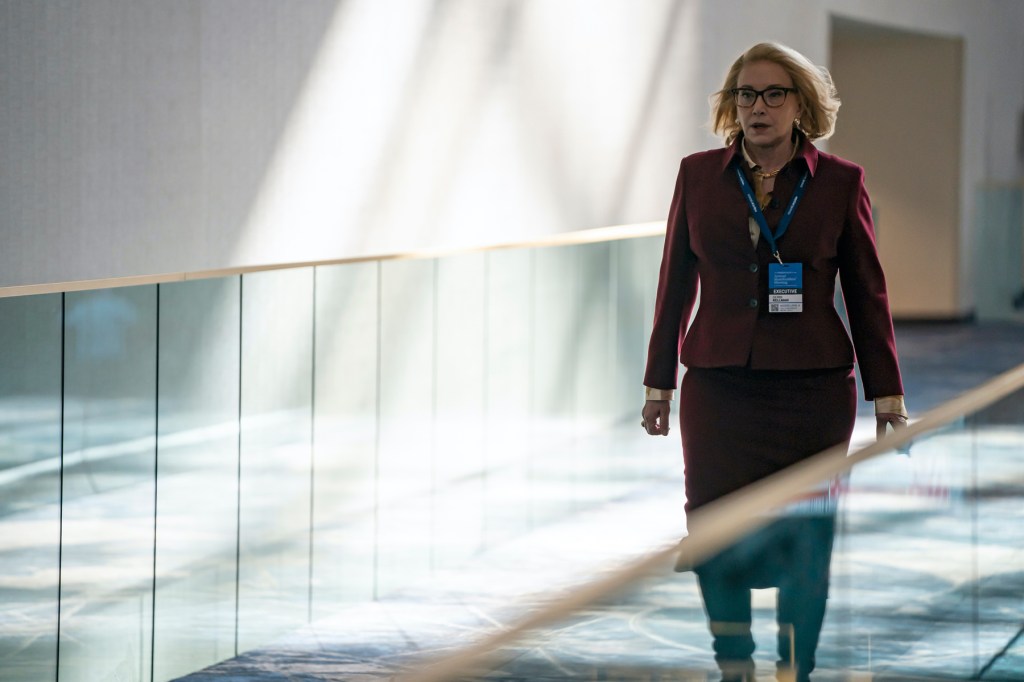 And the third irony is that, once again, Logan Roy more or less comes out on top, even when he should have failed due to the aforementioned piss-madness. There are times in the series when Logan wins because he’s the most shrewd negotiator, or at least the most strong-willed one. But there are also times when he wins just because everyone else assumes he will and acts accordingly. Shiv and Roman and Gerri behave through much of the episode like they are still marching to the orders of a master of the universe, tying themselves into logical and rhetorical knots to make sense of behavior we can recognize as irrational and compromised. It’s only in the face of overwhelming evidence, and the input of Logan’s assistant Kerry, that they accept that the emperor has pissed his new clothes. Shiv winds up saving the day, more or less, but it’s Logan who gets the credit — and who screams at her like the sick and frightened old man he is when she tries to hand him a champagne glass to celebrate the compromise with Sandi. But to the confused victor go the spoils, and Logan gets to maintain his aura of invincibility for the time being, even though he was anything but this week.

Logan’s fallibility, meanwhile, makes this an especially chaotic episode — in an intentional, entertaining way — for everyone else. Because there’s a chance that Roman and the others will all be applying for jobs at Target if the vote doesn’t go their way, everyone is a bit more craven and desperate and flop-sweaty. That includes Frank and Karl and Gerri being forced to vamp on stage for the shareholders, Kendall warning Greg that he may have to reveal his identity to the DOJ, Greg in turn pondering the thought of suing his grandfather (“in a way that’s, like, an affectionate way?”) and/or Greenpeace after Ewan(*) opts to donate his entire fortune to charity, and Tom wanting Shiv to get pregnant so he can emerge from prison to a home with a baby in it.

(*) It gets a bit lost in the shuffle of the run of “piss-mad” jokes, but Ewan describing Logan’s backers as “his gang of crapulous shills” is just a marvelous turn of phrase, especially as delivered by the great James Cromwell.

It’s just a wild, incredibly funny hour of Succession doing nearly all of what it does best. And with the Sandy-Logan feud largely settled, plus the Raisin preparing to leave the political stage, things are very wide open for the second half of the season. There’s obviously the DOJ investigation and Kendall’s estrangement from Logan — who here orders Kerry to permanently block his son’s number from his phone — to be dealt with, but it’s the mark of a confident show that such a major story arc could be resolved only midway through a season.