After more than a month, a Brooklyn jury is deliberating whether to convict “America’s most hated man” Martin Shkreli on securities fraud charges. Shkreli, a 34-year-old Manhattan resident, is accused of illegally rolling over $11 million from his hedge funds, MSMB Capital and MSMB Healthcare, into his biotech company Retrophin and paying off personal debt between 2009 and 2014. He allegedly repaid investors using the company’s profits and stocks without consulting board members. He denies all eight counts of fraud and conspiracy and faces up to 20 years in prison if convicted.

On Thursday, prosecutors and defense lawyers made closing arguments before federal Judge Kiyo A. Matsumoto. Shkreli told “lies upon lies” to his alleged victims, said Assistant U.S. Attorney Alixandra E. Smith, according to The Washington Post. “Depending on which investors he is talking to, he changes the story” since he knew “he would get people to give him money.”

Shkreli’s defense lawyer, Benjamin Brafman, who didn’t offer any witnesses, argued that this was a victimless case since every investor gained a profit. Brafman told jurors that the charges were “rich people B.S.” and explained that he felt like “a lifeguard on a beach” who feared “not to be able to rescue someone.” He said Shkreli was “floating in his own little world” and told jurors he needed their help “to try and save” him from drowning.

Meanwhile, Shkreli sat in the courtroom reportedly smirking and swiveling in his chair, as his father sat near him in the front row.

Shkreli’s smug face hit the news in 2015 when his company Turing Pharmaceuticals jacked up the price of Daraprim, a drug used by HIV and cancer patients battling deadly parasitic infections. Shkreli, nicknamed “Pharma Bro” on social media, increased prices 5,000 percent, from $13.50 to $750 per tablet. He never lowered the costs despite being scolded by Congress, news media and various healthcare experts.

After leaving the court on Thursday, Shkreli took to Facebook, writing that his “case is a silly witch hunt perpetrated by self-serving prosecutors” and that his “amazing attorney sent them back to junior varsity where they belong.” As he’s done in the past, he then referenced President Donald Trump, adding, “Drain the swamp. Drain the sewer that is the DOJ. MAGA.”

Later that evening, he went on Facebook again to live stream, saying, “Trial’s over tomorrow, bitches. Then if I’m acquitted, I get to fuck Lauren Duca.” (Shkreli was previously banned from Twitter for allegedly harassing Duca, a Teen Vogue contributing editor.) On Friday morning, Duca posted a statement on Twitter: “I would (still) rather eat my own organs. So much as touch me, and I’ll gladly chop off one of yours.”

Despite his erratic online behavior, Schkreli’s outbursts on social media still weren’t as strange as the real life courtroom drama that was taking place. Here, 5 WTF moments from the trial.

It took 3 days to find 12 jurors who didn’t already hate Shkreli
Prosecutors and defense lawyers dismissed over 300 people during jury selection, many voicing disdain for “the face of corporate greed,” according to the New York Post.

One potential juror said both of his parents were “struggling to pay” for Daraprim. Others told the court, “I think he’s a very evil man,” and, “In my head, I said, ‘That’s a snake.'” One women wrapped her hands around an imagined neck while saying that Shkreli was “a person who puts profit over everything else.”

A young man noted Shkreli spent $2 million on the only copy of the Wu-Tang Clan album Once Upon a Time in Shaolin. When asked why he couldn’t serve as a juror, he told Judge Matsumoto, “Honestly? Because he kind of looks like a dick.” Finally, five men and seven women were selected to determine Shkreli’s fate. 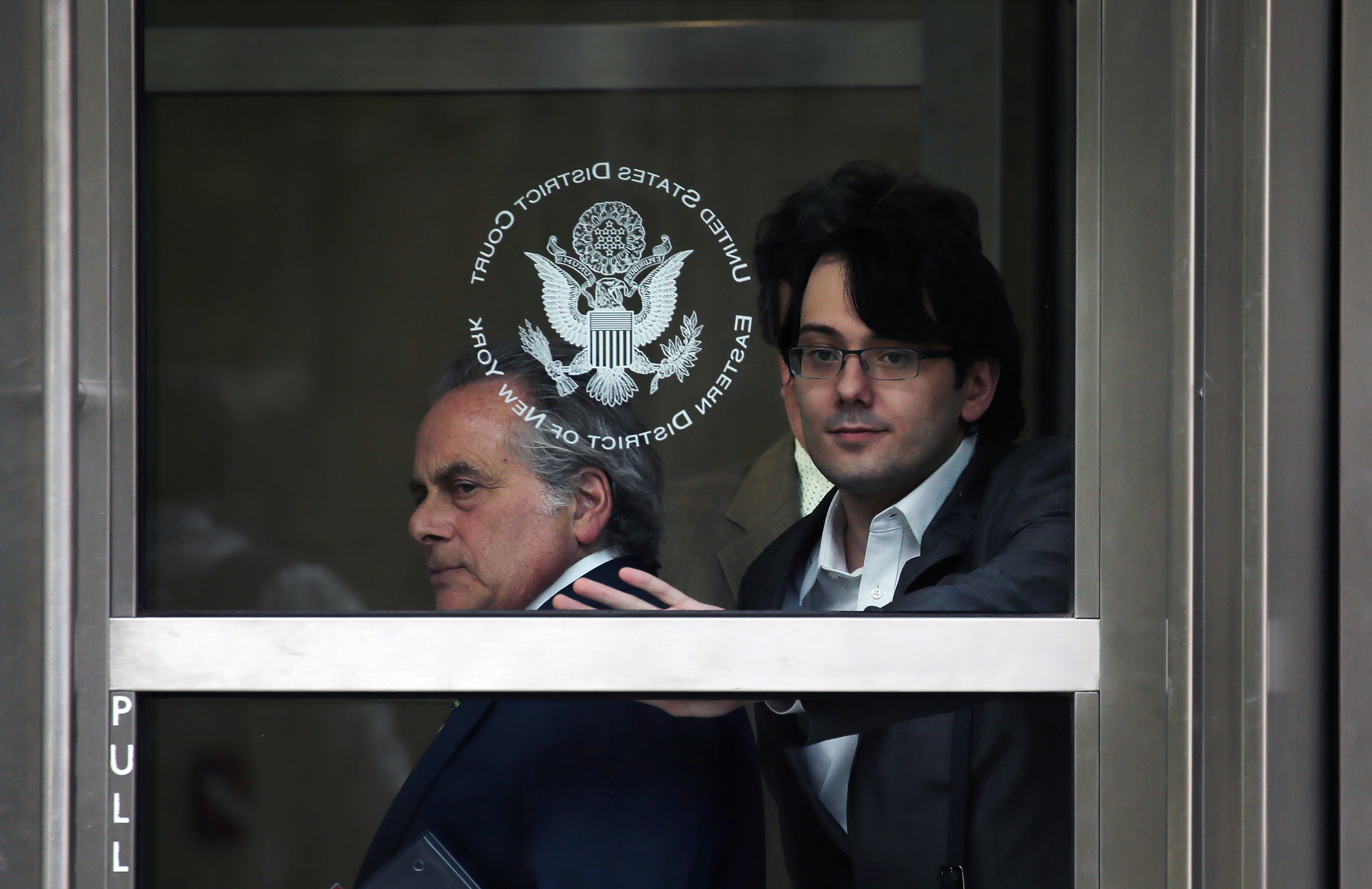 Shkreli couldn’t keep quiet in the courthouse, so the judge had to formally tell him to shut up
Earlier this month, during a lunch break, he surprised reporters covering his trial by going on a rant against his detractors, calling the prosecution “junior varsity” and saying that his critics “blame me for capitalism,” according to CNBC. Brafman reportedly had to enter the room to wrangle his client. Prosecutors filed papers with Judge Matsumoto, writing that Shkreli could influence jurors by “roaming the halls of the courthouse commenting” and that he was “riling up his social media following.” Brafman argued that Shkreli had “a demonstrated history of significant anxiety” because he felt attacked by the media and ran his mouth as “defensive measures.”

Prosecutors felt the need to ask Judge Matsumoto to issue a gag order on Shkreli, since he had “embarked on a campaign of disruption” and had made “a spectacle of himself and the trial directly on the courthouse grounds.” A modified gag order went through, but it didn’t prevent Shkreli from sharing thoughts on Facebook Live and sessions on YouTube.

Shkreli channeled President Trump
Prosecutors described Shkreli as a conman, while his lawyers painted him as an intelligent but socially awkward misfit. Despite help from his advisers, Shkreli couldn’t stop sharing his thoughts on Facebook, “This was a bogus case from day one,” he wrote on July 19th. He echoed the fake news delusions of President Donald Trump, writing, “More trash from the NYTimes. Is there an intelligent writer-editor pair at this company? Who would read this ‘news’?”, and attacked prosecutors calling them the “cowardly government.” “This is not North Korea,” he wrote on July 20th.

People agreed Shkreli reminded them of Dustin Hoffman’s character in Rain Man – but they had different reasons for the nickname
In his opening statement, Brafman said that Shkreli’s colleagues called him “Rain Main” because they believed he was autistic, according to CNBC. He claimed people challenged his sexuality and bullied his so-called genius. “As Lady Gaga said, he was born this way,” Brafman said, referring to Shkreli’s eccentric behavior. “You wanna call him names? Call him names. Just don’t call him guilty. ‘Cause he’s not guilty.”

But witnesses challenged his claim. One investor, Schuyler Marshall, recalled being “extremely impressed” with Shkreli, who reminded him of the iconic character. “I did not at the meeting conclude that Martin Shkreli was autistic or on the autism spectrum, or make any kind of diagnosis,” Marshall told the defense. “My recollection of the movie was that character was very, very focused on one area… and he could come up with answers that other people couldn’t come up with.”

Shkreli didn’t testify, and gave his reasoning in a Jay-Z quote
Earlier this week, Shkreli told Judge Matsumoto that he was opting not to testify at the trial. After the court session, he posted on Facebook, “plead the fif when it comes to the fam im like a dog i dont speak but i understand” – quoting Jay-Z’s 2001 release “Never Change.” A witness testified that Shkreli, who posted Periscope videos titled “Rap Life” and attacks on GhostFace Killer last year, used Retrophin funds to buy $10,000 worth of tickets to see Jay-Z perform in New York in 2012.

Despite the relevant lyric, Shkreli omitted other rhymes in the song that don’t really help his case: “I’m still f–n with crime cause crime pays. Out hustlin, same clothes for days. I never change. I’m too stuck in my ways, I never change the line.” The jury is scheduled to reconvene next week to determine whether Shkreli will actually endure a Hard-Knock Life.