A review of “Rewind 1921,” this week’s episode of Lovecraft Country, coming up just as soon as I tell you the ingredients for “road rash”…

“Rewind 1921” debuts about a week shy of the one-year anniversary of the Watchmen series premiere, which put the Tulsa Race Massacre at the center of half the cultural conversations many of us have been having for the past 12 months. That two HBO shows should devote mid-October episodes to recreating the same historical atrocity is a fluke of timing — and a reflection of HBO’s commitment to telling black stories — but one that can’t help inviting comparisons.

Watchmen began in Tulsa, with no context or warning, and after a brief, silent-movie prologue, flung us into an immersive, horrific recreation of the violence that burned down the Greenwood district, which at the time was known as “Black Wall Street.” It’s not a long sequence, but the POV style and sense of utter chaos created the illusion that we were trapped there with young Will Reeves for an eternity. It delivered a sense of the scope and terror of the fire and blood, then moved on to tell a story informed by that nightmarish moment.

“Rewind 1921” spends significantly longer in and around Greenwood, and it has a direct plot reason for our characters to go there. Diana is dying from the curse Captain Lancaster placed on her, and Christina informs our heroes that the only way to undo it is with The Book of Names, which burned in Tulsa along with most of Tic’s mother’s family. So the episode is going back to the scene of the crime as part of a quest narrative. On top of that, much of the time we spend there is devoted to Montrose facing down the demons of his past, in ways partially connected to the larger violence of that day, and partially not.

Characters confronting extremely personal problems against the backdrop of a big historical moment is a tried-and-true narrative device, from Jack and Rose falling in love before the sinking of the Titanic to Rick Blaine’s ex-girlfriend walking into his Casablanca bar in the early days of World War II. If you tell your story right, the sweeping factual event and the intimate fictional one complement each other seamlessly, and it doesn’t matter that the problems of one or two people don’t amount to a hill of beans in this crazy world.

With “Rewind 1921” — written by Misha Green, Jonathan Kidd, and Sonya Winton, and directed by Jeffrey Nachmanoff — the fusion of the two elements at times works beautifully, while at others seems to put the Lovecraft universe and our own at odds.

As has often been the case for Lovecraft, there’s a lot of exposition and piece-moving before we get to the episode’s big trip. Christina agrees to temporarily reset the curse to buy them more time, but only in exchange for Atticus willingly going to Ardham with her so she can use his blood to cast her immortality spell. Montrose confesses to Tic that George might be his biological father; Ruby encourages Leti to find safety with her and Christina; and Hippolyta returns from the many lifetimes of “I Am” to save her daughter by any means necessary. Once Hippolyta has used her newfound superpowers to function as a literal motherboard for Hiram’s broken time machine, Tic, Leti, and Montrose step into the hotel where Montrose’s father Verton (Will Catlett) took his mother for a special night once a year. It’s only once our time-travelers have stolen some clothes to look inconspicuous that we get to the heart of this week’s story.

Montrose leads Tic and Leti to the block where he and Tic’s mother Dora grew up in neighboring houses, and is directly confronted by a memory we’ve heard him wrestle with in the past: Verton in the front yard, demanding that young Montrose pick a switch his father can beat him with. Verton is furious that Montrose tried on George’s expensive prom jacket, but seems even angrier to have caught his younger son with a prom corsage tucked into his hair. The adult Montrose has so thoroughly internalized his father’s homophobia that, as he watches this formative moment of abuse play out, he mutters, “I deserved it.”

It’s a powerful moment — almost too powerful. The Tulsa excursion will soon split into two separate missions: Leti going into Dora’s house to find the book, while Tic tries to keep his father from changing the past. He thinks Montrose is going to warn George about his death 30-plus years from this moment. In fact, Montrose is trying to prevent the murder of his first real boyfriend, Thomas, during the massacre’s early hours.

Everything about this passage is incredibly fraught. Montrose wants to undo just one death among so many on that awful day, and perhaps make his younger self less ashamed of who he is in the bargain. Tic is terrified that any action at all might erase him (and therefore his and Leti’s unborn son) from existence. Soon, Montrose is referring to Thomas’ death as the first in a long list of sacrifices he had to make to be Tic’s father — a staggeringly cruel thing to say at any time, but especially now that Tic is contemplating becoming a father himself, as well as the question of his own paternity. And then there’s the spine-tingling, paradoxical moment when Tic realizes that the heroic young man with the baseball bat from his father and uncle’s most famous story is… Atticus Freeman, who just so happens to see a bat lying by his feet.

All of this is dynamite, and so well played by Michael Kenneth Williams and Jonathan Majors. But it also feels so specific to Montrose and the complicated, tragic relationships in his life that it feels almost coincidental that Thomas was murdered at the start of the Tulsa massacre, rather than on any other night in that era where being black and/or gay could have gotten him killed.

Leti’s end of things is more fundamentally connected to history, as she has to convince matriarch Hattie (Regina Taylor, terrific as ever) to give her the book and let her family burn to death at the hands of the white men who have come to destroy the neighborhood. But even there, it’s about equal parts tragedy and quest.

There’s a moment when the portal fails right after Tic has leaped back into 1955, and it seems like Montrose and Leti may have to travel through time the slow way to see him again. Really, though, it operates as an opportunity for the episode to put aside Lovecraft-specific concerns and more fully reflect on what happened in Tulsa on May 31st and June 1st, 1921. Montrose stands at a hotel room window, stares out at the death and destruction around him, and begins reciting the names of real-life victims, like surgeon A.C. Jackson. And Leti marches through the flames, the all-important book clutched to her chest. Unlike Hattie and all the other women whose deaths she is forced to witness, she cannot be physically hurt by any of this, thanks to Christina’s invulnerability spell. Because unfortunately, superhuman powers are sometimes the only way out of problems created by the worst of humanity’s impulses.

It’s a great climax, but one that doesn’t entirely feel of a piece with the rest of the episode. Taking the action back to Tulsa is perhaps the series’ biggest swing yet. And for once, Lovecraft Country doesn’t entirely connect. 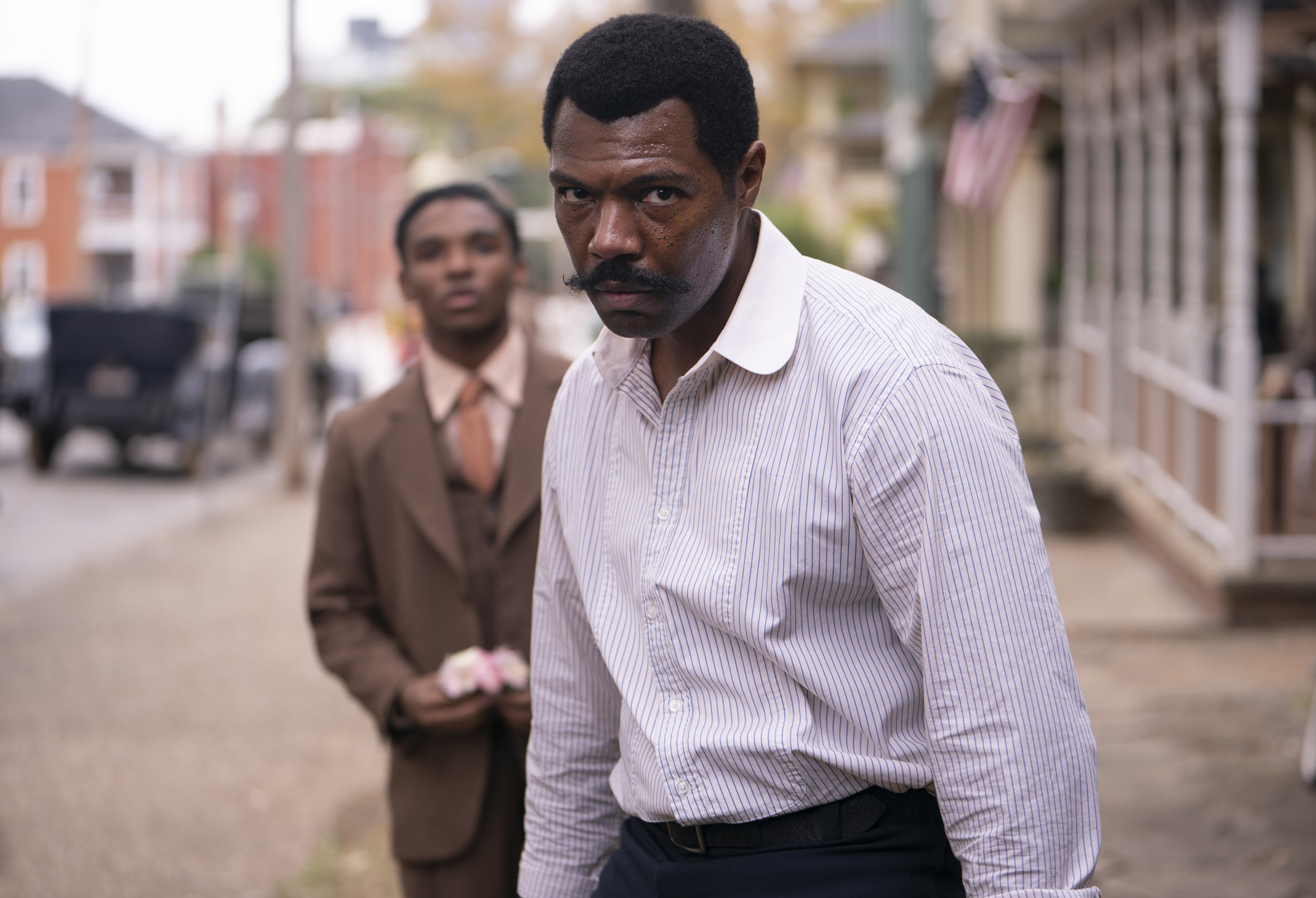 * Turns out that Captain Lancaster is only mostly dead as a result of the shoggoth attack, which allows us to get an explanation for his black torso: His men have been murdering black men and using them for “spare parts” each time their leader is badly injured. Only this time, Christina has cast a spell that is keeping him from healing.

* What happened to Tic’s new pet shoggoth, by the way? As often happens, the episode opens in a way that briefly creates the illusion we’ve skipped over material, because Green and company are so eager to just move on to the next big idea.

* Speaking of sketchy details, one of my complaints a few weeks ago about “I Am” was that Atticus somehow made it 500 miles from St. Louis to Mayfield, Kansas, in no time at all, despite being without a car. This episode’s chyrons now place the observatory in Kentucky — which also has a Mayfield, and one that’s only 200 miles from St. Louis. This is still too far for Tic to travel on his own at night, and it’s also confusing that Hippolyta was studying a Kansas map in “I Am,” but I at least wanted to acknowledge the apparent change in venue. Or maybe these later episodes take place on a parallel earth where the observatory is in a different K-named state? Best not to think too hard about it.

* Ruby until now hasn’t seemed overly tempted to the dark side by Christina. But that moment where she starts turning off the comatose Dell’s life support while suggesting that she’d rather be a redhead was pretty chilling.

* More Watchmen/Lovecraft overlap: The Dreamland Theatre marquee makes an appearance here. Where on the other series, the Dreamland was showing a Western unique to the Watchmen universe, here it’s screening Buster Keaton’s The Goat.

* Finally, this week’s song list is a bit thinner than in previous episodes, with Al Jolson’s “Avalon” and “Don’t Kill Dub” by Rob (featuring the poetry of Sonia Sanchez) as the two notable numbers before Leti’s walk through the Greenwood flames. That final sequence is accompanied by “Tulsa, 1921: Don’t Catch the Fire,” a composition by Laura Karpman & Raphael Saadiq, sung by Janai Brugger of the Metropolitan Opera.