A review of “I Am,” this week’s Lovecraft Country, coming up just as soon as I stop watching and start dancing…

“I feel like they just found a smart way to lynch me without me noticing the noose.” —Hippolyta

Misha Green’s ambitions with Lovecraft Country are so great that her reach occasionally exceeds her grasp. With “I Am,” Green (who co-wrote the episode with Shannon Houston; Charlotte Sieling directed it) reaches higher and farther than she has at any point to date. It’s an episode that sends George’s wife Hippolyta on a trip through time and space, to moments famous (Josephine Baker’s reign as the toast of Paris) and fantastical (touring the cosmos with a parallel-reality version of George). In the process, it not only offers its heroine a chance to live the life (or lives) denied to her in 20th century America, but suggests a wholesale rewriting of pop-culture history, where of course African warrior women would do widescreen battle with Confederate soldiers, while Buck Rogers and Flash Gordon would be replaced by people who look like Hippolyta and George.

It is a lot, even by Lovecraft standards. Not all of it works, in both big and small ways, but the sheer audacity of it, and the fierce commitment of Aunjanue Ellis’ performance, left me applauding large swaths of it.

It takes us a while to get to Hippolyta’s incredible journey. The first half of “I Am” is about as traditionally structured as this show gets. There’s a very Spielberg-ian teaser (complete with very John Williams-ish music) focusing on Hippolyta’s attempts to unlock Hiram’s orrery. Soon, though, we are checking in on the other characters mere moments after the end of the fifth episode, with Ruby still absorbing the news that “William” has really been Christina, and Atticus telling Leti about the pages he has decoded. There’s a lot of exposition, and various subplots inch carefully forward, until finally Hippolyta makes her way to an abandoned observatory in Mayfield, Kansas, where the episode can really get moving.

The teaser and previous episodes have implied that Hippolyta is gifted at math and science. As she studies the strange device with a keyhole to match the one in the orrery, we realize that she’s not just gifted, but an utter savant. Equations dance in front of her face, Beautiful Mind-style, and the only thing stopping her from completely deciphering the machine is the arrival of two Kansas cops who are in league with Captain Lancaster.

It’s here that we come to the episode’s most ridiculous moment: Atticus somehow making it all the way from St. Louis (where he is trying to gather intelligence about his late cousin Ethel, the only other member of his mother’s family to survive the Tulsa Massacre) to Mayfield in what seems like minutes. The episode has already made a point of Tic being without a car, so even if you don’t know that it would take seven hours to drive the nearly 500 miles from St. Louis to Mayfield (never mind how he would get from a bus station to an observatory in the middle of nowhere, at night, in a country the show has made a point of saying isn’t safe for black people to travel through after dark), and even if you allow for some time to pass between when Hippolyta starts working on the machine and when the cops walk in, it’s… dumb. And particularly dumb since the episode is about to introduce a portal capable of taking Hippolyta anywhere, and any-when, she wants to be. It adds an unintentionally comical layer to the action sequence where aunt and nephew fight the cops, and it’s just unnecessary. (The episode could have easily placed both Ethel’s friend and the observatory much closer to one another, and/or contrived for Tic to get access to another car.)

The fight ends with one cop shot to death by Hippolyta, the other lost in the time-space rift created by the machine. Then Tic and Hippolyta are both drawn into the portal’s force field. She’s sucked in completely; we don’t know what happens to Tic, other than that he returns to the observatory now clutching a book with the same title as this TV show, and runs out without noticing that one of Diana’s homemade (and signed) comic books is lying by the dead cop’s body.

Hippolyta, though, goes on a trip — in every sense of the word. She flies through a purple void and lands on another planet, then is taken by two armored aliens to a sterile, futuristic white room, where she wakes up to find glowing purple devices implanted in her wrists. One of her keepers is revealed to be a towering black woman (with her natural hair worn in an impressive, pyramid-shaped style) who is referred to in the script as Seraphina Aka Beyond C’est (and played by Karen LeBlanc), though in dialogue only answers questions of her identity with the episode’s title: “I am.” This is not her being needlessly difficult, but neatly summing up the possibilities of the place in which Hippolyta finds herself. Seraphina Aka Beyond C’est can be whatever, wherever, and whenever she wants to be, and so can Hippolyta. 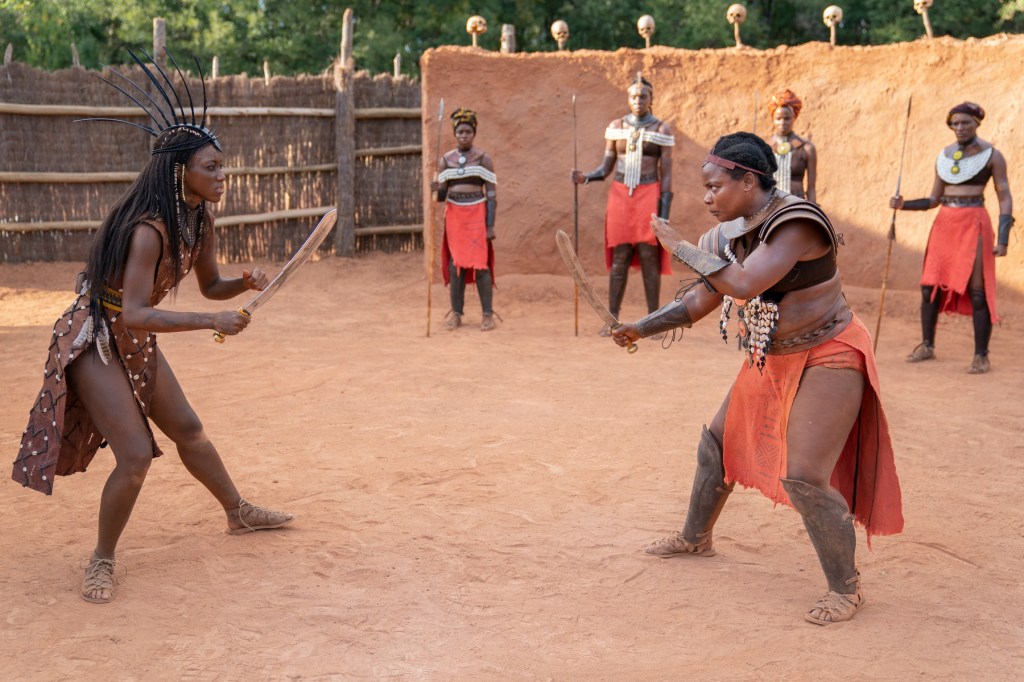 After Hippolyta uses her prodigious intellect to figure a way out of what she believes to be a prison cell, her first dream is realized when she’s transported to Paris to dance on stage with the great Josephine Baker (Carra Patterson). Shell-shocked, she understandably stumbles through the first number, but soon embraces this fabulous other life, replete with a “Lady Marmalade” montage that winks at Moulin Rouge (set in Paris a few decades before Baker’s reign). Burlesque dancing certainly doesn’t take advantage of all of her abilities, but the sheer sense of freedom from being in Baker’s orbit allows Hippolyta to step back and reconsider the life she lived in Chicago. “I see what I was robbed of back there,” she tells Baker. “All those years, I thought I had everything I ever wanted. Only to come here and discover that all I ever was was the exact kind of Negro woman white folks wanted me to be.”

It’s a powerful sentiment, albeit one that has to do a lot of heavy lifting for a character of whom we’ve seen very little prior to this week. The notion of Hippolyta’s wasted genius has been at best vaguely hinted at in her previous appearances, and even here, the sheer force of Ellis’ performance does more to sell the idea than what’s in the script.

But by this point, her journey is taking us to an African village, where she finds herself being trained in the way of the warrior, for what will turn out to be a brutal battle against… Confederate soldiers? It’s a potent fantasy — the idea of defenders of slavery having to go up against a cadre of unchained, armed, highly-trained black women — and also something of a parallel to/repudiation of John Carter’s adventures on Mars, which Atticus defended reading near the beginning of the series premiere. Here, the Confederate isn’t the fantasy hero, but part of the faceless cannon fodder cut down by Hippolyta and her new allies. It’s a stunning, inspiring action sequence.

From there, Hippolyta gets to enjoy a slightly tweaked version of her real life, telling a still-living George about her adventures so far — in “a world where I can name myself anything” — before taking him along with her on the next ones. Now, they are pulp sci-fi adventurers, wearing deliberately corny space suits (hers has a hoop skirt modeled on planetary orbits) and flying in a Fifties-style rocket ship that is in stark contrast to the sleek, modern lines of the room where she talks with Seraphina Aka Beyond C’est.

Hippolyta could stay in this place — these places — forever, it seems, and who would blame her? But she appears to end the episode determined to go back to her very real, very small, life, for the daughter trapped there who needs her (and will need her even more once the comic book is discovered). It’s a familiar conflict at the end of an otherwise deliberately unfamiliar sequence: When you become a parent, your children’s needs have to win out over your own dreams if the two are at odds. But at least for a glorious burst of infinite time, space, and possibility, Hippolyta Freeman gets to live out so many of her dreams, all at once. And it’s almost as thrilling to watch as it is for her to experience. 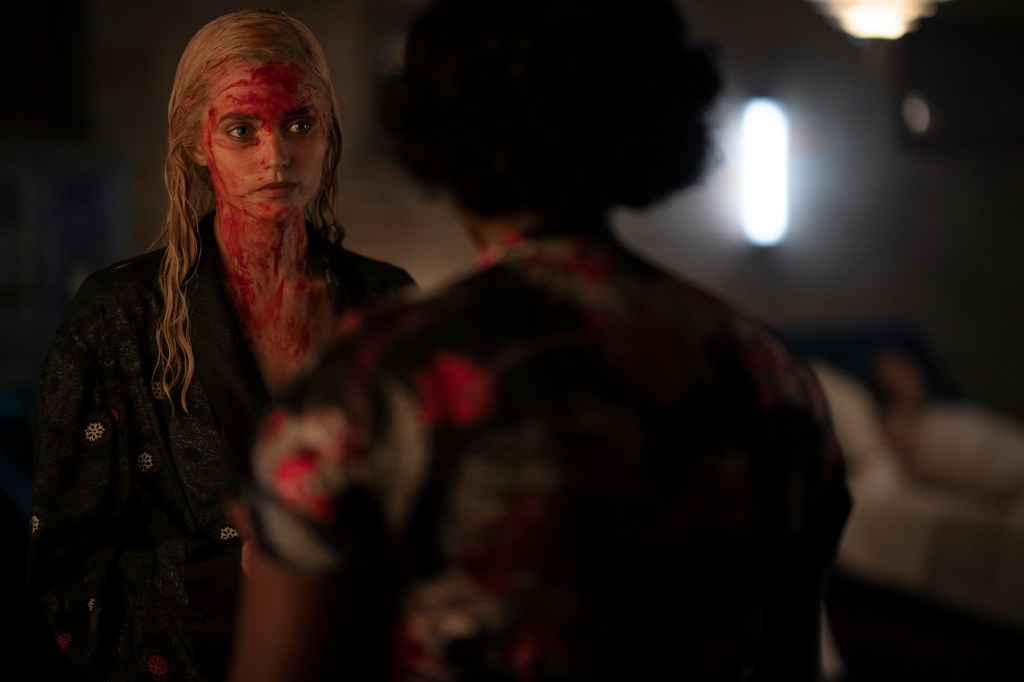 * Atticus and Leti walk in on Montrose and Sammy mid-argument, the body language making clear that this is a couple’s fight. Tic does not respond well to this revelation. But while he hurls a gay slur at his father, his response seems to be borne much less of homophobia than of resentment. The news reframes the years of abuse he suffered at Montrose’s hands, making clear that young Atticus got beat up as a way for his dad to wrestle with his own self-loathing. Between the history of violence between them, Montrose’s murder of Yahima, and this new information about Montrose’s identity, it’s hard to imagine these two ever finding common ground.

* The first scene between Christina and Ruby confirms my suspicions that there was a real William (who died at Captain Lancaster’s hands), whose body is being preserved alongside Dell’s so Christina can keep making the shapeshifting potion. We don’t know what Christina tells Ruby about her past encounters with Leti, but it’s apparently convincing enough for Ruby to start spying on her own sister on behalf of her most unusual lover.

* If Leti really is pregnant, is the event something natural via the sex she’s had with Atticus, or supernatural of origin?

* That was Veep alum Sufe Bradshaw as the drill sergeant type training Hippolyta during her African warrior phase. Quite the change from working for Selina Meyer.

* The woman in a man’s suit making a toast to creative women during the Paris sequence was the legendary artist Frida Kahlo (and played by Camila Cano-Flavia), who was known to cross-dress a time or three in both her life and her art.

* Finally, we get another spoken word/music hybrid, as Hippolyta and alt-George’s adventures through space are accompanied by a passage from the 1974 Afro-futurist sci-fi film “Space Is the Place,” written by the jazz musician Sun Ra. Other songs this week: “A Message From the Man in the Moon” by Josephine Baker; “Baby Let’s Make Some Love” by The Penguins; “Besame Mucho” and “Piel Canela” by Josephine Baker; “Bam-A-Lam” by Roy Milton Orchestra with Mickey Champion; “Lady Marmalade” by LaBelle; “Fire” by Mother’s Finest; and, as has now become standard, the Alice Smith version of “Sinnerman” over the closing credits.