A review of this weeks’ Lovecraft Country, “Meet Me in Daegu,” coming up just as soon as I’m Judy Garland’s butler…

“We’ve both done monstrous things. But that does not make us monsters.” —Ji-Ah

Even for a show that morphs wildly from week to week in structure and in tone, “Meet Me in Daegu” is a pretty big departure for Lovecraft Country. The bulk of the episode is in Korean with English subtitles, set half a world away from Chicago, focusing on a character we’ve barely seen before (and mostly in our hero’s nightmares). Racism is still present — and a larger fear of the other drives much of the conflict between our main character and her “mother” —  but the stylistic touchstones are as foreign as the setting and language.

The past few weeks, I’ve heard complaints from viewers who have been frustrated by the show’s unpredictability: “Sorry, Alan,” one wrote to me on Twitter after I posted last week’s recap, “the narrative shifts from week to week are too jarring for me. I’m out.” I understand where they’re coming from, as the last few decades of television — and particularly the intensely serialized (and homogenized) approach that Netflix and the other streamers have taken has become the way that many viewers expect their shows to work. Standalone episodes — even ones loosely connected to a larger narrative — are often looked upon with confusion at best, contempt at worst. (Remember how angry some Mandalorian fans got over the “filler” episodes in the middle of that season? Sure they were fun and exciting, but if they don’t devote every minute to incrementally advancing the season-long plot, then what good are they?!?!)

To me, though, the fact that I go into each episode of Lovecraft with no idea what might happen, what genre it might be, or whose POV we’ll follow, is a feature, not a bug. Many of the best shows of the last few years have operated under a similar shapeshifting principle, including Master of None, Better Things, and Atlanta (which also has a few things to say about being black in America). There’s a thrill that comes from surprise, especially when the surprises are as well-executed as an episode like Ruby’s blood-and-guts walk on the white side. Consistency is great, too — and Lovecraft can be an uneven show in quality and basic narrative logic, in addition to changing up its style from week to week — but if you’re not working at a high enough level, it can also be incredibly boring. Everybody wants to make the next Wire or Breaking Bad; very few writers are as good as David Simon or Vince Gilligan, you know? 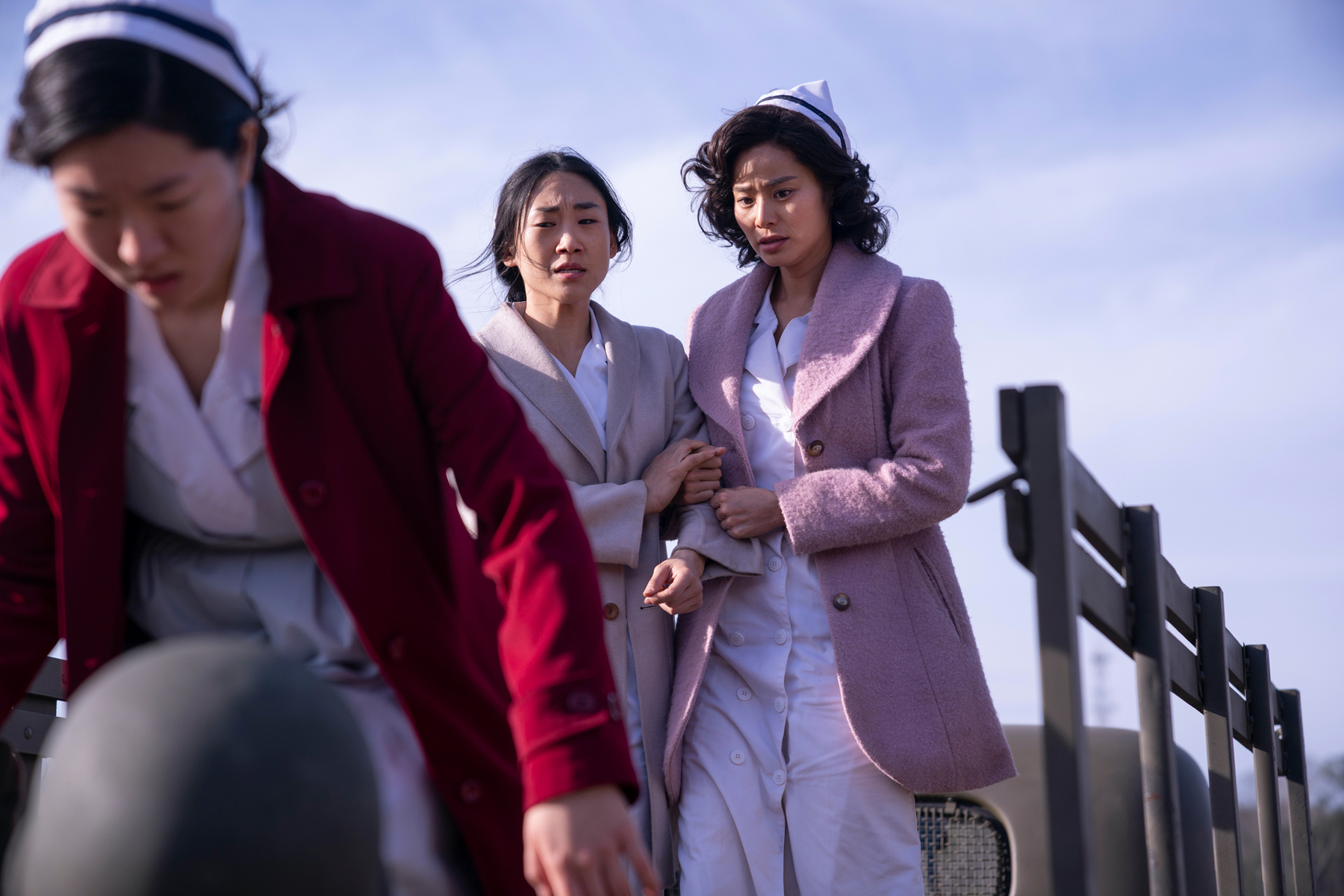 As change-ups go, “Meet Me in Daegu” is an impressive one. Its protagonist, Ji-Ah (played by Jamie Chung) has appeared briefly in various forms in earlier episodes. She’s the Martian princess from Tic’s series-opening nightmare; she and Tic have an imaginary fight to the death while he’s trapped in Ardham; and she and Tic speak on the phone at the end of Episode Five, “Strange Case.” But, for all intents and purposes, in this episode she is a new character, far removed geographically and thematically from the series to this point. When we meet her, she is a nursing student in South Korea in 1949 — and, perhaps more importantly, a Judy Garland fan. The episode opens on the Garland musical that gives us our paraphrased title, Meet Me in St. Louis, and Ji-Ah is so enraptured by “The Trolley Song” that she appears to dance and sing along, in a sailor dress that makes her look like she could star in a Hollywood musical of the period. (That is, if Hollywood was making musicals with nonwhite leading ladies.) It is, like Leti and George’s “Movin’ On Up” dance from the second episode, a fantasy, though in this case one that Ji-Ah is aware that she’s having. And her love of Garland will inform not only the tone of the hour — which at times can be just as flowery and melodramatic as some of Garland’s films of the Forties and Fifties — but its themes. Because as we’ll soon find out, Ji-Ah isn’t exactly Ji-Ah, but a kumiho — a Korean fox spirit known to possess women so that they can devour boys — summoned by Ji-Ah’s mother (or umma) to stop her husband from continuing to rape his stepdaughter. She is, her umma insists again and again, a monster wearing her daughter’s face(*), not capable of feeling or understanding human emotions. But could a monster really find something beautiful, even aspirational, in singing about the sounds of the trolley?

(*) In that way, is she that different from, say, Christina swanning around town dressed in William’s skin?

The episode (written by Misha Green and Kevin LauIt, and directed by Helen Shaver) takes its time revealing exactly who and what Ji-Ah is. At first, she seems merely a reserved young woman, possibly because of the family dishonor to which her umma alludes. When she watches intently as fellow student Young-Ja (Prisca Kim) brags about her own romantic adventures, it’s unclear if she’s jealous of Young-Ja, or of the men who get to be with her. Eventually, the answer is revealed to be neither: She is studying Young-Ja in the same way she studies Judy Garland, hoping that she can somehow learn what it is to be a human woman, and not have to depend solely on the absorbed memories of the dozens of men whose souls she has consumed since she killed umma’s husband.

The scene where the kumiho’s many tails emerge from her every orifice — even her eye sockets, dammit! — is among the most shocking and horrifying of the series to this point. (And even though the tails are furry, and the setting is South Korea rather than Japan, the scene can’t help feeling more than a bit tentacle porn-y, especially with the way the bedroom is designed, with just a bed in the center of a large and otherwise spartan space.) But it makes the stakes of the episode clear, and also explains why Atticus has seemed so afraid of her each time he’s spoken with her on the phone in past episodes.

Jamie Chung is so charismatic, and Ji-Ah’s story so strange and fascinating, that the episode works fine just focusing on her, until our real protagonist marches into the frame and coldly shoots one of Ji-Ah’s fellow students in the head as part of a ruthless interrogation to ferret out a communist spy (whom we already know to be Young-Ja). He is in that moment much harder and crueler than the Tic we know from previous episodes. Thankfully, when Ji-Ah meets him again in the hospital, he is back to being the swole-but-sensitive bookworm we’ve come to know and love so well.

We know Ji-Ah is not actually going to kill him — though, given that this is a story about a monster replacing a human being, it’s possible that the episode could have ended on a twist revealing that the Tic we’ve been watching previously is an impostor, too — but there’s still lots of tension surrounding how and why she won’t. And all of this is complicated by the way that she develops the kind of real feelings for Atticus that her mother claims are beyond her reach.

The Army’s arrival brings with it not only Atticus, but plenty of racist white GI’s, who view their Korean hosts as something less than human, in a way not dissimilar to how we’ve seen Tic, Leti, and friends treated back home. Atticus’ friend Sung (Daniel Chung) is a Korean-American who is looked down upon by both his birthplace and his ancestral homeland, but at least he can say he was drafted to fight alongside these bigots. Atticus, on the other hand, volunteered as a means of escaping his troubled home life with Montrose. He does not seem to like the man the Army has made him into, and meeting Ji-Ah (even if only she knows that it’s really their second encounter) seems to unlock the man he was and hopes to be again.

He, in turn, brings Ji-Ah achingly close to the humanity she has been told is denied her. (In that way, Umma — who just wants Ji-Ah to have homicidal sex with 100 men and go away, as the spell that summoned her dictates — isn’t that much better than the American soldiers who would only approve of Ji-Ah if she’s a prostitute.) She has sex with Atticus (who shyly admits that he’s still a virgin), and is able to resist the urge to let her tails loose that time, but she’s less careful when they sleep together again later. She barely is able to reel them in, and he runs out, understandably terrified, rather than waiting for her explanation — much less her warning of what she has glimpsed in the visions of his lifeline that her tails have elicited, involving him and Leti, and him strapped into some kind of contraption that will bring about his death. 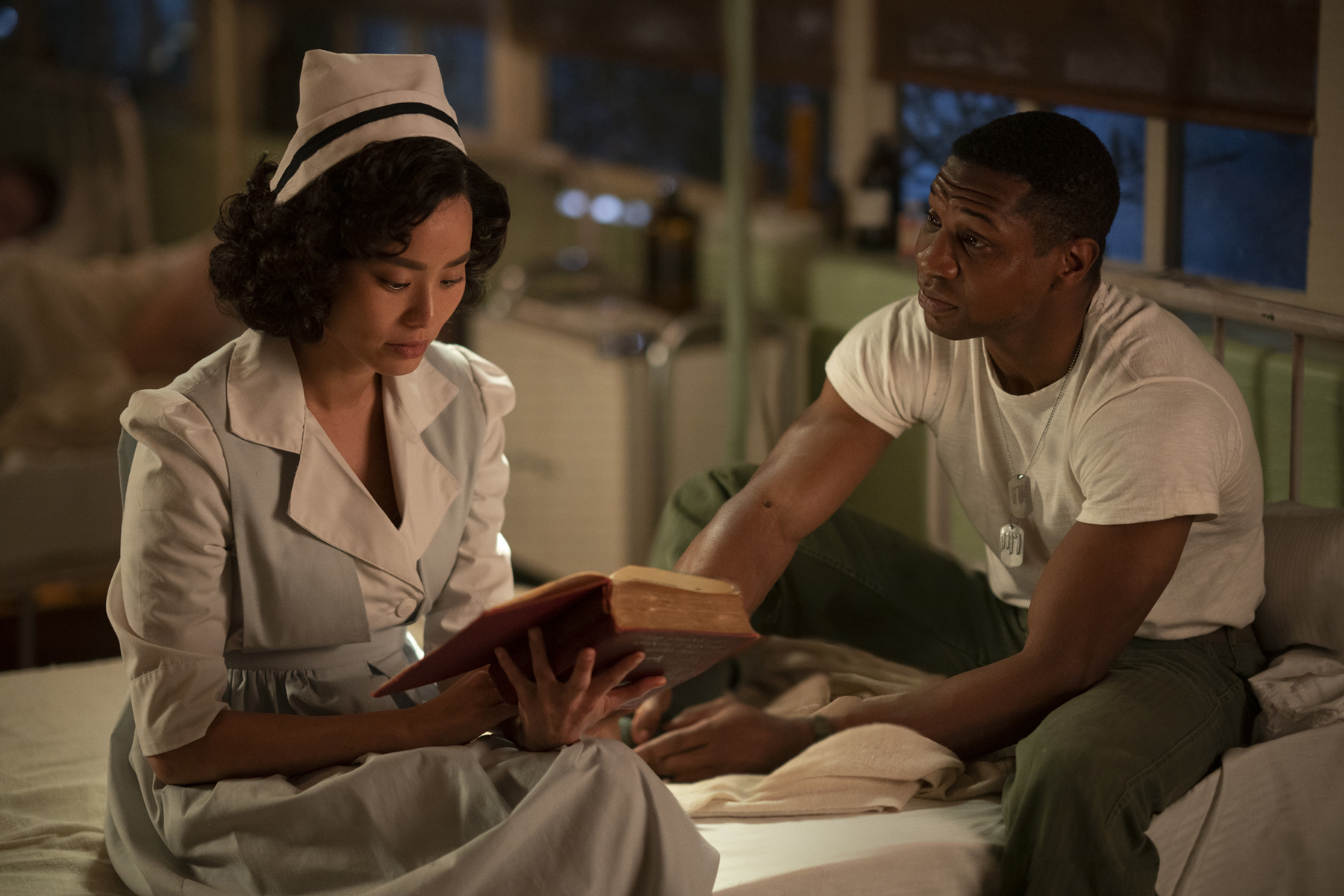 Ji-Ah’s premonition teases what’s to come when the action returns to Chicago. Her visit to the shaman — where her chastened mother offers to pay the price for the spell, rather than making Ji-Ah murder one last man — suggests that Ji-Ah’s journey has much death ahead of it before she can rest. Perhaps that journey will take her to America, too, and “Meet Me in Daegu” will be a splashy introduction for a character who will be a major part of the series moving forward. But even if this is the last we see of her, the episode was so rich and creepy and powerful that I don’t mind the side trip in the slightest.

* In an episode filled with remarkable visuals, my favorite may have been a calm one: Ji-Ah standing under the overhang outside the hospital, staring at her blood-soaked hands while a torrential rain pours down only inches away from her, the image framed to make it look like she is standing on the edge of a portal between two realities — like Tic’s friend Sung, belonging in neither.

* The cartoon that’s playing right before Easter Parade (or, rather, before the American military’s arrival ruins the screening of Easter Parade) is Make Mine Freedom, a 1948 anticommunism propaganda film, directed by none other than Tom and Jerry creators William Hanna and Joseph Barbera.

* Finally, the shift in setting and perspective meant a very different, and pared-down, song list, with much of the episode simply featuring songs from the Judy Garland movies Ji-Ah loves so much. (And this week’s equivalent of the James Baldwin speech is an excerpt of a recording Garland made in 1964, while preparing to write an autobiography, which here plays as Ji-Ah and her umma make their way back to the shaman.) We hear a Korean band at a bar play “Besame Mucho” (another sign of other cultures invading the country, as one of Ji-Ah’s speed dates had complained about), and at one point we hear “Oppaneun Punggakjaengiya,” by Park Hyang-rim. But even the trip to Korea can’t keep the Alice Smith version of “Sinnerman” out of the closing credits.