A review of this week’s Fargo, “The Pretend War,” coming up just as soon as I’m your Monopoly card…

“And I realized: To be an American is to pretend. Capiche? You pretend to be one thing, when really you are something else.” —Ebal Violante

Midway through “The Pretend War,” Oraetta and Josto come to a disagreement about where Casablanca was filmed. She thinks it was in Istanbul, while he’s certain it was shot in Casablanca itself. Neither of them is correct: Nearly all of it was shot on a movie studio lot in Burbank. Nor, if we’re being honest, does it in any way look like it was made on location, with the bulk of the action taking place on a single set. But the magic of the movies — and of this one, perfect, quintessentially American movie in particular — is how easily they get away with their fakery. Casablanca looks like it was filmed on a stage, but we believe the actors have been transported halfway across the world because Humphrey Bogart, Ingrid Bergman, Claude Rains, and friends play their roles with such conviction. They talk about being in Casablanca, so they must be, right?

The episode surrounding that postcoital conversation is full of characters trying to puzzle out what’s real and what’s a hustle, or making big shows of force without yet delivering on much of the threatened violence. It makes for another busy hour where our omniscient point of view gives us a much clearer picture of what’s happening than anyone down on the ground has, even if some characters, like Doctor Senator and Deafy Wickware, are smart enough to make good, educated guesses.

The hour’s first big set piece is a memorable one: Constant Calamita, who tried and failed to kill Loy’s son Lemuel last week, is driving a shipment of guns down a lonely road at night when he is confronted by a wall of fire that soon expands into a ring. Loy’s men hijack the truck — which turns out to be full of rifles — and brand Calamita’s cheek using a heated-up shotgun barrel. Black men using both fire and branding to terrorize white men is a potent enough role reversal to cover for the logistics of how various people get safely in and out of the ring.

When Josto finds out, via Rabbi Milligan, about the unauthorized attempt on Lemuel, he opts for a dramatic confrontation of his own against his disloyal brother. He barges into the club above the department store and fires shots that fly just over Gaetano’s head. The bullets wind up having less impact than the words that follow, as he notes that the botched hit just cost them 300 guns, which Cannon wouldn’t have felt emboldened to take without such a prior act of aggression.

With all those rifles, the Cannon crew gets something tangible out of their fancy display, but in neither case do the targets seem emotionally swayed in the slightest. Calamita is permanently marked by the shotgun barrel, but more eager than ever to kill his family’s enemies, while Gaetano continues to seethe with resentment at how he has to take orders from Josto.

Because this is Fargo, we not only get shows of force in the present, but stories about ones from the past. While Deafy waits outside Joplin’s for Odis to complete an errand with the Faddas, our favorite Mormon marshal tells Calamita and Gaetano about what happened when a group of Italians tried moving to Utah. The details are a bit fuzzy — it’s implied that the men were gangsters like the Faddas, but perhaps not — but the punchline is all that matters: that the gentlemen in question were lynched by Deafy and his pals, and dragged behind horses for several miles until they literally lost their heads. It’s an ugly tale, told in chipper fashion by a man munching on carrot sticks who prides himself on protecting his little corner of America from anyone not exactly like him. In many ways, Deafy doesn’t fit into this town at all. But in his homicidal ethnic defensiveness, he fits in just fine.

While the men are trying to figure out what’s pretend and what’s real, the Fargo women are busy dealing with the complications of stolen loot. After she gets done enjoying some erotic asphyxiation with Josto, Oraetta has to deal with the arrival of Ethelrida in her apartment, there to take up her odd neighbor’s offer to earn some extra cash doing odd jobs. It’s unclear exactly what Nurse Mayflower’s agenda is with our heroine, whose family she recently tried to poison with that pie, but she’s none too pleased to have this intruder in her home. And with good reason, as Ethelrida soon stumbles upon a closet containing the medicines Oraetta uses to euthanize her patients, news clippings about their deaths, and the various trophies she has taken from the people who have been on the receiving end of her self-authorized mercy. Ethelrida is smart enough to potentially put the pieces together, but the fact that she takes Donatello Fadda’s ring with her seems unlikely to go well for her. As Chekhov once said, if you give a clever girl a dead Mafia don’s ring in the first act…

More problematic in the short term: the cash that Zelmare Roulette and Swanee Capps took from the Cannon warehouse last week. The cash itself should be more than enough to resolve the Smutny family’s debt to Loy. The problem is that no matter how thoroughly Zelmare scrubs the bills, she can’t get the stink of her lover’s vomit out of them. So when poor, naive Thurman Smutny brings the stinky bills to Loy — at Loy’s home, no less — he could not make it plainer that he is paying the local crime lord back with the man’s own stolen money. He’s pretending to have come into a small fortune, but Loy knows what’s up, and that’s very bad.

It’s all pretend, until it isn’t. And a real war is a lot less fun than a pretend one. 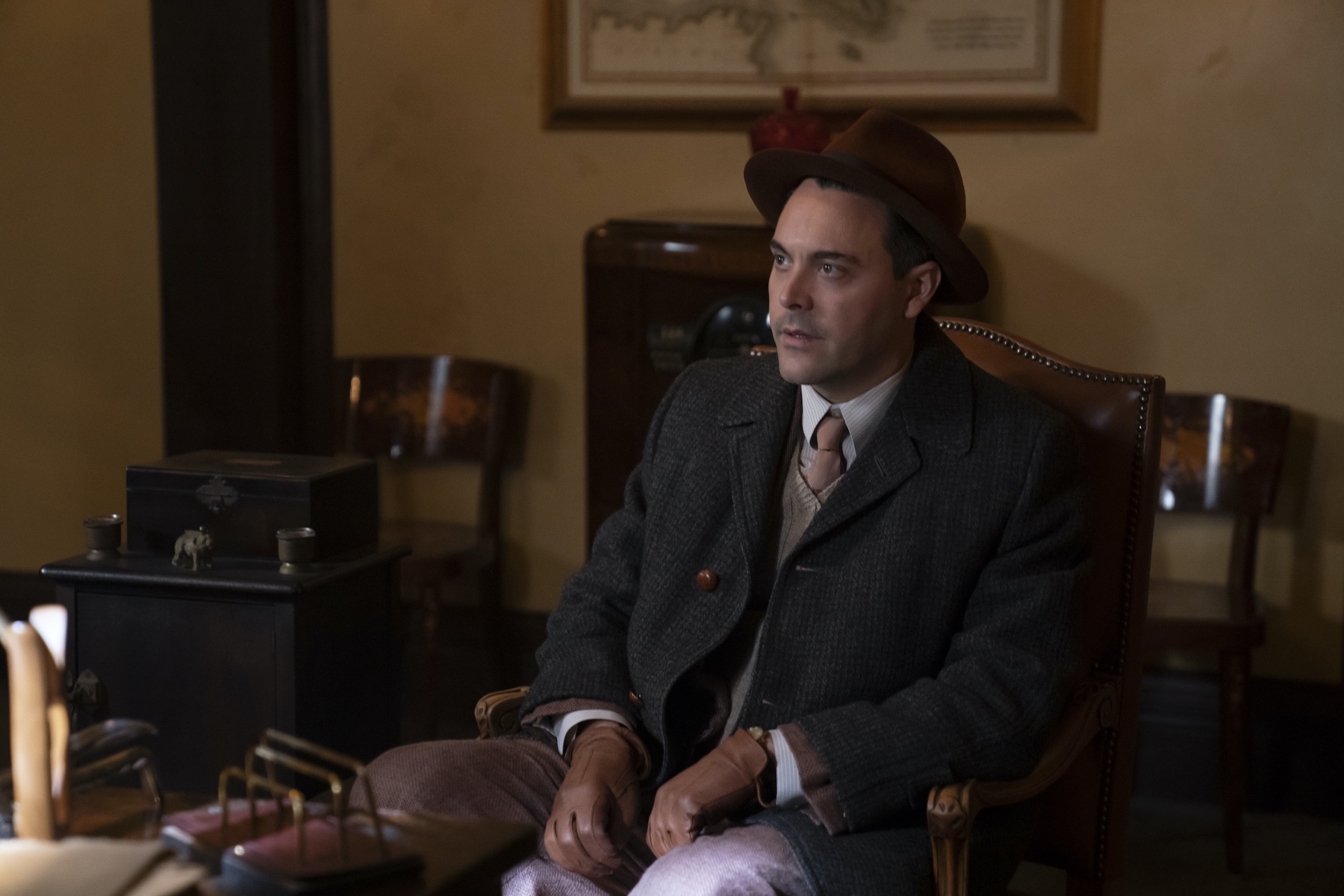 * Previous seasons maintained a nice balance between telling serialized stories and crafting distinct individual episodes. This year, so far, is much more purely serialized, partly by accident. As Noah Hawley explained on the TV’s Top 5 podcast, the season was originally planned as 10 episodes, but during production, he realized he had too much material and got FX to agree to let him Frankenstein together a bonus episode by rearranging scenes from the middle chapters. It’s a bit disappointing, because Fargo usually (even in the uneven third season) aspires to something more ambitious than just “and here are all the crazy things that happen next in our story.”

* This week’s absolutely perfect Glynn Turman line reading comes at the end of Doctor Senator’s usual coffee shop summit with Ebal Violante, with the indignant condescension dripping all over his delivery of “’Cause it seems to me that you ain’t tracked in on all the critical goings-ons in your house these days.”

* Odis spends much of the episode trying and failing to get Deafy to leave town so the crooked detective can avoid being outed as a tool of the Faddas. On the one hand, his OCD tics remain a bit much, even for this show; on the other, Deafy’s amusement about them (“Is this the minute?”) reaps big comic dividends for Timothy Olyphant.

* Speaking of Olyphant, I highly recommend watching his latest Late Night With Seth Meyers appearance, which is blissfully chaotic even by Olyphant’s usual talk show standards. Fargo comes up, kind of, but… just watch it. Trust me.

* The Smutny family continues to be haunted, whether a ghost lurking in the hall near Ethelrida or a body emerging from the tub as Roulette is washing the stolen money there and hanging it to dry.

* Loy wants to offload most of the seized rifles to Mort Kellerman in Fargo. Kellerman appeared in flashback in Season Two, as a former rival of the Gerhardt syndicate. Not long after the events of this episode, he’ll be stabbed to death in a movie theater by a young Dodd Gerhardt.

* Finally, while the series mostly features nods to the works of the Coen brothers, it’s not above references to other famous bits of popular culture. In this case, we get Josto’s exasperation when Gaetano pulls a knife on him, snarling, “It’s a gunfight, asshole!” — not unlike the time in The Untouchables when Sean Connery relayed a similar complaint to one of Al Capone’s hitmen. In that case, Connery’s arrogance proves misplaced; will Josto’s?