A review of this week’s Fargo, “Raddoppiarlo,” coming up just as soon as I sing “The Battle Hymn of the Republic”…

“You’ve got to see the whole picture. That’s the point.” —Doctor Senator

Loosely translated, “Raddoppiarlo” is Italian for “double it,” which is an appropriate title for an episode that seems even bigger and busier than last week’s two-part premiere.

The hour begins by revisiting Zelmare and Swanee’s prison break from the perspective of the man tasked with finding them: U.S. Marshal Dick “Deafy” Wickware, played by Timothy Olyphant. Where Noah Hawley often tries to cast actors against type, this is by far the series’ least surprising casting choice. Who is more qualified to play a self-righteous U.S. Marshal with a knack for long-winded stories than the man who was Raylan Givens on Justified and Seth Bullock on Deadwood? Olyphant’s presence is so on-the-nose that some of Deafy’s scenes — particularly his encounter with the Kansas City police captain who’s not at all happy to see him — basically feel like a time-bending Justified crossover. (At least that keeps it in the FX family.) But Olyphant is just so good and charming playing this sort of cocky gunslinger that it’s hard to object too much to the predictability of his casting.

And Deafy does have more to offer than echoes of Raylan. There’s that full name and nickname (inspired by his penchant for ignoring comments that displease him in some way), of course, which are among the season’s most delightful. (Even if Doctor Senator, Esquire, remains the champ on every level.) More importantly, though, there’s the reasons for his smugness, and his otherness, and the way both tie into the season’s larger themes about immigration, assimilation, and how minority groups are more likely to turn on one another than on the system that’s keeping them down. As Deafy discusses with the captain, he is a Mormon. In the premiere, Ethelrida talked about how the members of the Jewish, Irish, and Italian gangs who had previously gone to war in Kansas City were technically white, but still looked down upon by WASP establishment figures. Even in his mountain man getup, Deafy superficially seems like he’d fit in better with Dr. Harvard than he would with Josto Fadda. But the Mormons have at this point separated themselves from other white Christian groups, and are so mistrusted in some areas that, as the captain notes, Deafy can legally be shot on sight for being inside the Missouri state limits(*). Like Loy Cannon and Doctor Senator, Deafy is obviously much smarter and more capable than many of the people he encounters in this story, but he is still an outsider, to be looked on with suspicion.

(*) There technically was a law on the books to this effect in Missouri, known as the “Extermination Order,” issued in 1838 by Governor Lilburn Boggs (itself a great Fargo-type name), and it wasn’t rescinded until 1976. Whether the order really did give Missourians license to kill any Mormons they saw, and whether any Mormons were actually killed under the cover of this order, is a more complicated matter.

Deafy dominates the episode’s early passages, as he, Odis, and a throng of Kansas City cops search the Smutny family funeral home in vain for our two bank-robbing fugitives. It is, like the sequence in the premiere where Donatello farted and got shot by two kids, full of both macabre comedy (the women hide in a drawer below a particularly smelly corpse) and tension (will one of the cops take a bite of Chekhov’s Poisoned Pie?). But even after the lawmen depart the mortuary, the episode remains a busy and chaotic one, thanks particularly to a trio of characters who arrived in the season’s second hour: Zelmare Roulette, Swanee Capp, and Gaetano Fadda.

The conflict between Gaetano and his brother Josto only grows this week. Josto fancies himself as cold and calculating, though he doesn’t really seem to be either of those things, while Gaetano is a man with a simpler philosophy: Kill anyone who is a bother to you. So he sends Constant Calamita and Rabbi Milligan to try to kill Loy Cannon’s oldest son, Lemuel, without first getting approval from Josto, who for the moment is the actual Fadda Family boss. Rabbi, who knows a thing or 12 about family members betraying one another, is smart enough to recognize this is an unauthorized hit, and prevents the cocky Calamita from killing Lemuel, leaving the Faddas on the brink of a civil war even as Gaetano is busy trying to ramp up an outside one with the Cannons. 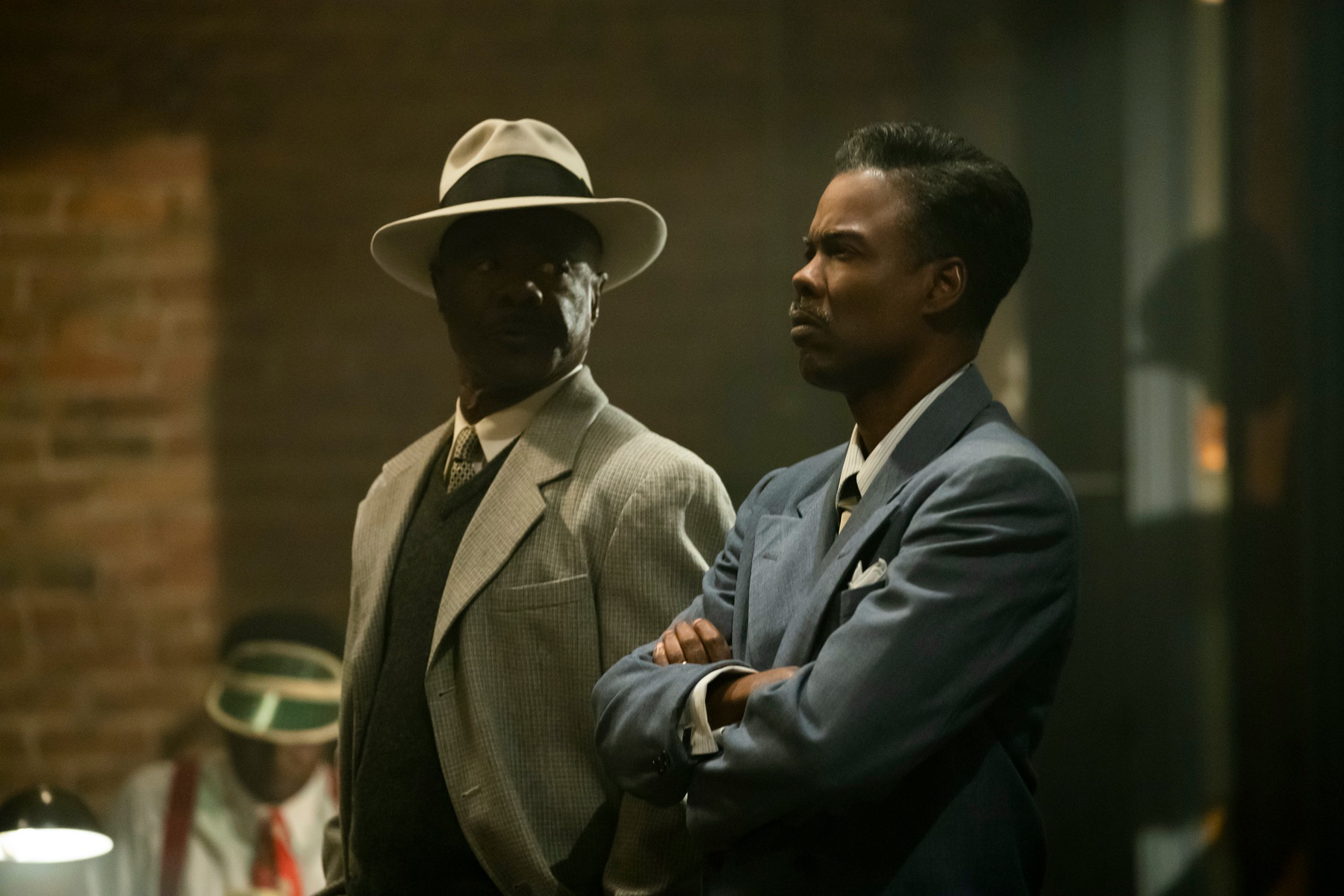 We do see that not all the Fadda soldiers are quite so eager for blood. There’s an obvious friendship between Doctor Senator and his Fadda counterpart, Ebal Violante. Fargo is often at its best when it just lets one of its great actors talk for a while, and such is the case here, as the great Glynn Turman gets to spin a monologue about Doctor Senator’s service in and after World War II, and how he got to spend six weeks interrogating Hermann Goering. He thought he was accomplishing a lot for the impending Nuremberg trials, only to find out that his racist commanding officer only gave him the assignment to make a Nazi squirm at having to answer to a black man. (Doctor Senator’s 400-page report — with footnotes! — ended up in the trash.) In another scene, Gaetano will ask Rabbi about being Irish, to which Rabbi responds, “I’m American.” What this season is reminding us, over and over, is that there are different levels of being American, and the rights and privileges of each level are rarely merit-based. Doctor Senator is an obviously smart and charismatic man. He has a law degree, dresses as well as anyone on this show (with the possible exception of Constant Calamita), and would seemingly be an asset to any organization. But he’s a black man in the American midwest in 1950, so he is a gangster’s consigleri.

Still, he’s at least a man in a violent world run by men, which gives him a leg up on the women of the story. This feels like a particularly male-dominated season, yet the women keep coming along to disrupt what the guys are doing. Oraetta Mayflower is like a tornado unto herself, having euthanized Donatello Fadda on her own, and now repeatedly seducing Josto. (One of the episode’s better gags is that Josto keeps forgetting that she exists, only she’s so self-confident that she takes it as him teasing her.) Nobody expects her to be a key player in the story, and they certainly don’t expect a lesbian couple — one black, the other part Native American, part Chinese — to insert themselves into the Cannon/Fadda rivalry. But that’s exactly what Zelmare and Swanee do in robbing Loy’s main office.

The heist is, like the mortuary search, a mix of suspense and dark comedy, since Swanee becomes the victim of Oraetta’s Ipecac-laced pie (another instance of the nurse from Minnesota influencing events). While Zelmare is ordering employees around the boiler room at gunpoint, Swanee is feeling it on both ends, both puking and farting up a storm(*). Her intestinal distress prolongs the entire affair, and is perhaps responsible for one of the Cannon men having time to take a shot at Zelmare and being shot by her in turn.

(*) Between Swanee in this episode and Donatello in the premiere, do we need to refer to this season as Farto? (I’ll see myself out.)

The episode ends with Loy and his inner circle gathered to discuss both the robbery and the attempted hit on Lemuel. They wonder if this is all part of a coordinated Fadda action, when we know that both attacks were rogue operations to varying degrees. It’s hard not to blame them for feeling uncertain, or even for Josto to keep forgetting about Oraetta, because everyone is dealing with so much already. And based on the way Fargo works, you shouldn’t expect things to get less complicated anytime soon.

* There are hints of the supernatural in every season of the show, including Season Two’s flying saucer and the magical bowling alley from Season Three. Here, while Swanee is eating the tainted pie, Zelmare and her sister Dibrell argue about whether the devil literally followed their family from Mississippi to Kansas City. The editing and framing of the scene, particularly the extreme close-up on the burning cigarette paper, suggests Satan could be in the room with them right now.

* It’s interesting to see which actors are and aren’t perfect matches for this show’s very complicated and specific tone so far. Jason Schwartzman’s a Wes Anderson favorite you’d think would do very well in a series that can be self-consciously arch, but he often seems uncomfortable. Ditto Jack Huston as Odis, even though he played an incredibly strange character (and incredibly well, at that) in disfigured sniper Richard Harrow on Boardwalk Empire. Whereas Jessie Buckley looks to be in hog heaven with every scene as Oraetta, and even less seasoned performers like E’myri Crutchfield (as Ethelrida) and Kelsey Asbille (as Swanee) seem completely at home in their characters and this strange world.

* Glynn Turman’s Goering monologue is a highlight, but Chris Rock does pretty well himself in another scene where a panhandler hits up Loy for money in front of Lemuel and his whole crew. Loy coldly waves a roll of bills in the man’s face, then explains to his son that even the merest glimpse of this money is enough to send the beggar down an imaginary route where he gets to spend all of it. By returning the cash to his own pocket, he says, “I just stole from that man. Forget it weren’t his money. Just seeing that scratch, he made a future for himself, and I took that from him.” People making plans on fortunes they don’t yet have, and likely never will, is a very American — and very Fargo — philosophy.

* From the Department of You Can’t Possibly Make This Up: The actor who plays the police captain not happy to see U.S. Marshal Tim Olyphant is named Guy Van Swearingen, a name that can’t help evoking Seth Bullock’s greatest frenemy.

* Finally, as mentioned last week, vomit is a recurring Coen brothers motif, and we sure got a lot of it in the heist sequence. Meanwhile, Doctor Senator’s line about why God created tornadoes evokes A Serious Man in particular, and the brothers’ great affection for The Wizard of Oz in general. And the comment about Zelmare and Swanee’s pantyhose disguise is quoting a funny Raising Arizona scene.