'The Falcon and the Winter Soldier': The Man Behind the Mask - Rolling Stone
×
×

A review of this week’s The Falcon and the Winter Soldier, “Power Broker,” coming up just as soon as I try to run in these heels…

There’s a moment late in “Power Broker” where Sam and Bucky are once again bickering, this time about which direction Bucky was supposed to go in the middle of a gunfight. Sam feels his instructions were very clear, and gripes, “It’s in every action movie!” It’s supposed to be another joke about how these two just plain don’t like each other, in an episode working hard — really, really hard, to the point where the strain is palpable — to lean into the comic tension between our heroes. But Sam’s complaint inadvertently hangs a lamp on the generic nature of the episode, and really of the show so far.

'The Falcon and the Winter Soldier' Recap: American Skin

'The Falcon and the Winter Soldier' Recap: To Catch a Predator

The action scene is primarily there to establish the ass-kicking bonafides of Sharon Carter, the disgraced ex-S.H.I.E.L.D. agent who briefly assisted Steve Rogers in the second and third Captain America films. And Emily VanCamp does well with the bigger showcase, and with playing a much more cynical Sharon than the one who flirted with Steve in the movies. But the fight choreography itself is pretty utilitarian — not much fancier than what Agent May used to do regularly on Agents of S.H.I.E.L.D. — as is most of the plotting. It’s all cobbled together from ideas that have been done to death elsewhere, in the hopes that the mere presence of familiar (or, in some cases, semi-familiar) faces from the MCU will make it seem brand new and thrilling.

Watch The Falcon and the Winter Soldier on Disney+ here

We’re also leaning way into the “six-hour movie” model at this point, where the only concern is advancing the plot by any means necessary, regardless of how interesting it is on its own. Whether or not you enjoyed the sitcom tributes on WandaVision, that was a show that was very clearly built to be consumed weekly, whereas Falcon so far would probably play better all at once. It would still be saggy and shapeless, but at least certain stretches, like this one, wouldn’t have to linger very long.

The major development this time out is Bucky’s decision to bust Zemo out of prison to help track down the Flag Smashers — because recruiting an old bad guy to help stop the new bad guys never goes awry, does it? For a few scenes, “Power Broker” treats Zemo as a kind of Leo Getz from the later Lethal Weapon movies, a pest that Sam and Bucky barely tolerate because they need him. But it turns out that a little of Sam and Bucky arguing goes a long way, as does using Sam for any kind of comedy (like having to swallow the snake guts at the Madripoor bar). What seemed a charming accent in Captain America: Civil War now feels not ready to be the main course.

Daniel Bruhl, on the other hand, does well in a lighter mode than when we last saw Zemo. This is a Helmut Zemo more in line with his comic-book roots: an actual baron used to the finer things in life, and someone fond of wearing a purple mask(*) when trouble is afoot. It’s clear he will probably cause more trouble than the Flag Smashers, but both actor and character are enjoying themselves for now, and that glee is infectious in a way a lot of other parts of the show aren’t currently.

(*) In the comics, Zemo’s father Heinrich was a World War II-era Cap villain — and, in fact, the man responsible for “killing” Bucky near the end of the war — whose mask could not be removed due to an accident involving one of his inventions, “Adhesive X.” Since the mask was pretty baggy, I never quite understood why Heinrich didn’t just cut off all but the parts that were glued in place — if nothing else, to make eating easier — but it’s one of those details I guess I wasn’t supposed to question. At least for now, Helmut only seems to need his mask for moments when the show wants to use Bruhl’s stunt double.

When we catch up with Sharon, she seems to have turned completely cynical and amoral as as a result of the fugitive life she had to lead post-Civil War. Her exit from the episode suggests some or all of this may be an undercover put-on, because consequences in the MCU really tend to wax and wane. (See also Wanda and Monica’s final conversation in the WandaVision finale.) Bucky has set free a mass murderer who, among other things, assassinated the king of a sovereign nation. While Wakandan security officer Ayo (a minor figure in previous MCU films, including Civil War and Black Panther) appears at the end of the episode to confront him, it’s hard to imagine either he or Sam getting into significant trouble for allowing Zemo to roam free again. Consequences aren’t required, but when the various movies and shows keep paying lip service to the idea, and then mostly ignoring it in the end, it becomes a distraction.

Very little of this is bad, exactly. I compared the premiere to one of the Netflix Marvel shows, and this is definitely on the more energetic end of that spectrum. But, as with those action scenes, it’s mostly just competent and not much more. We know Marvel Studios is capable of doing much better.

* As ridiculous as it is for Zemo to be on the loose, at least we got that brief glimpse of him trying to cut loose on the dance floor at Sharon’s party, and thus this GIF:

* Bucky’s notebook is revealed to be the one Steve was using in Captain America: The Winter Soldier to keep track of things people said he should catch up on from his time in the ice — like Marvin Gaye’s Trouble Man album. Sam’s response to hearing Zemo defend the album in the face of Bucky’s ambivalence brings to mind the ClickHole classic, “Heartbreaking: The Worst Person You Know Just Made A Great Point.”

* After last week’s episode tried for some nuance with both John Walker and Karli Morgenthau, this one starts inching them more into pure villainy. Wyatt Russell is now playing Walker with an omnipresent sneer, and his temper seems easy to trigger. Meanwhile, Karli’s decision to blow up a building filled with bound security guards undercuts any attempts to suggest she may be morally in the right here.

* Some Marvel nerdiness: Madripoor was first introduced in an issue of New Mutants, and is best known as the place Wolverine goes when he needs to get away from X-Men drama for a while. Smiling Tiger, the mercenary whose identity Sam briefly assumes, is a minor villain from the Nineties New Warriors comic. As much as Sam disliked the colorful suit, he would have really hated having to wear the comic-book costume. And Dr. Nagel first appeared in the same comic that introduced Isaiah Bradley, Truth: Red, White & Black, as a scientist in the Forties trying to recreate Erskine’s formula.

* And one more bit of nerdiness before we go: When I was a kid, both Marvel and DC used to put out audio versions of some of their comics, and I wore out the handful I had on the little record player in my bedroom. One of those was a performance of Captain America #168, which introduced Helmut Zemo under his initial supervillain guise as “The Phoenix.” (The name had to change later, once X-Men laid claim to it.) I listened to that one over and over again, laughing every single time at the joke Falcon makes here, which I take as the origin story for all my middle-aged dad humor: 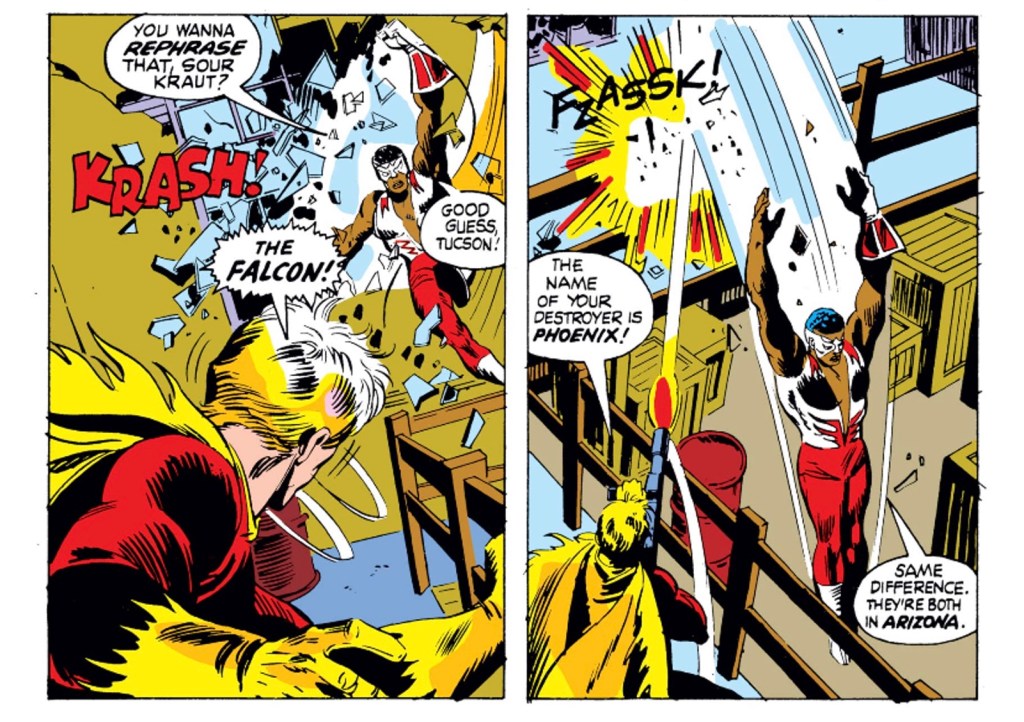