This post contains spoilers for the Euphoria special, which is now available on HBO Max and will be premiering Saturday night on HBO.

When last we left Rue Bennett, the heroin-addicted heroine of the high school drama Euphoria, she was grieving the abrupt departure of her girlfriend Jules. Having invested so much of her sobriety in this new relationship, Rue fell off the wagon, hard, and right into… a musical number?

Euphoria Season One feels like a million years ago (the finale aired in August of 2019), but Rue’s song-and-dance fantasy wasn’t out of character for a series that was so aggressively, proudly up in its audience’s grill in every moment of every scene. It wasn’t just that Rue and her classmates were engaging in reckless behavior with abandon, but that creator, writer, and chief director Sam Levinson tried to make every scene, and eventually every shot, pop off the screen.

Some of this was fantastic, particularly anything involving Rue herself, with Zendaya eventually winning a well-deserved Emmy for grounding every one of Levinson’s flights of fancy with absolute, unflinching conviction. Other parts felt unintentionally comical, particularly football star Nate (Jacob Elordi) being presented as a supervillain, able to intimidate everyone into bending to his indomitable sociopathic will, no matter the personal cost to themselves. (HBO Max, like most streamers, has a “skip intro” option; a “skip Nate” option would improve Euphoria by about 40 percent.) The performances — by not only Zendaya, but Hunter Schafer, Sydney Sweeney, Barbie Ferreira, and many more — were so strong, and the cinematography so stunning (even if it occasionally called too much attention to itself), that much more of Euphoria worked than didn’t. Still, the show’s rare quiet moments were so powerful, they couldn’t help prompt the question of how good the series as a whole could be if it ever switched to decaf for a while.

'Malcolm & Marie': A Man, a Woman and One Feature-Length Argument

The show has been gone so long in part because of Covid, but Levinson was able to produce a pair of special episodes meant to bridge the gap between seasons until fuller production resumes. Euphoria as it existed in that first season was full of bodies in close proximity, doing things together that simply aren’t safe in this impossible moment. The first of these two specials, titled “Trouble Don’t Last Always,” was filmed in September under strict pandemic guidelines, which means nearly all of it involves Rue and her Narcotics Anonymous sponsor Ali (recurring guest star Colman Domingo) having a quiet conversation over diner pancakes(*). (A title and premiere date for the second special have yet to be announced.)

(*) The episode was filmed at Frank’s Restaurant in Burbank, a familiar location from movies and television, including Gone Girl, Mad Men, and, perhaps most apt to note in light of the stack of flapjacks Ali spends much of this episode eating, the “Pancakes, Divorce, Pancakes” episode of Comedy Central’s briliant-but-canceled Review.

Necessity is the mother of invention — or, in this case, of restraint. The precarious (and expensive) nature of Covid-era production forced Levinson to take a low-fi approach that otherwise would not have been likely for a proper Season Two premiere. And it results in a spectacular hour that captures nearly all of the series’ strengths, without any of its weaknesses.

“Trouble Don’t Last Always” opens with Rue and Jules happily sharing an apartment, fooling around in the morning before Jules has to go to school. Given where Season One left off, it seems clear almost instantly that this is a fantasy of some kind, and it’s telling that after Jules leaves, Rue takes out her drug stash and prepares to get high. Even in her wildest, happiest dream, Rue is still an addict.

It’s a useful prologue for the episode-length discussion that follows. Ali is both a veteran sponsor and a veteran addict — at one point, he will confess to having returned to using after 12 years of sobriety, which all but destroyed any relationship he has with his daughters — and is neither swindled nor fazed by the various con games Rue tries running. He takes every unconvincing punch she throws at him, then confidently steps in and dismantles her excuses, her rationales, and her reasons for not fully committing to the program. Levinson clearly understands that the stage-trained Domingo can make gourmet meals out of basic rhetorical ingredients, giving him one monologue after another that’s deceptively simple on the page but undeniably powerful in performance.

At one point, Ali steps outside for a cigarette break. This being Euphoria, the odds seem high that something wildly dramatic will happen while he’s gone, whether it’s Rue getting higher in his absence, or Ali getting violently mugged in the parking lot. Instead, Rue stays in the booth while Ali calls one of his estranged kids to wish her a merry Christmas. After some understandable awkwardness, he is rewarded with a brief conversation with the grandson who has almost forgotten him. It’s the show using our expectations against us, not only with the quiet, safe outcome of the sequence, but that the call mostly goes well for Ali, who returns to the diner re-energized in his efforts to get through to his young, pained dinner guest. 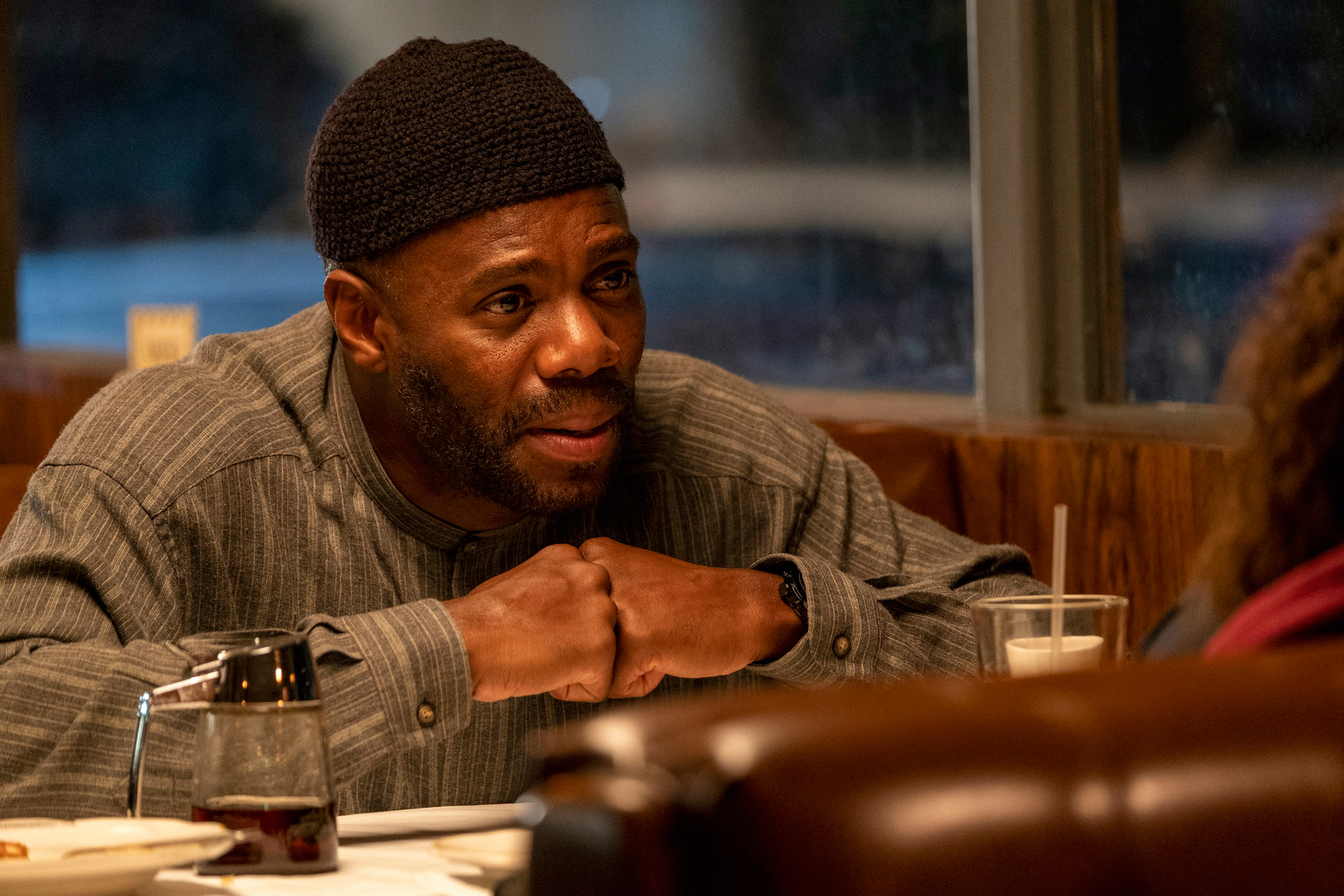 
Throughout the conversation, he has pushed Rue to accept the 12-step notion of surrendering yourself to a higher power, even though she’s an atheist who finds the idea of an all-powerful god offensive, given her father’s death when she was young, not to mention her own battles with mental illness and addiction. Verbally, the whole thing is much more a showcase for Domingo than Zendaya, as Rue mostly just listens to her sponsor’s lectures and deflects his questions. But then, her line readings throughout Season One — particularly for the show’s usual narration (another stylistic flourish that’s absent here) — were often underplayed and lacking affect, the better to contrast with the high drama all around Rue, and to illustrate how numb she has become to the horrors of this life. Her face almost always says more than her voice, and that’s true again here.

At one point, Rue quietly admits that she doesn’t see the point in self-improvement, because “I just don’t plan on being here that long.” It pains Ali to hear her speaking so openly about wanting to die, but rather than trying to talk her out of it, he simply asks how she would want her mother and sister to remember her after she’s gone. The camera stays on Zendaya’s face the whole time as the weight of her pain, and her understanding of how she in turn is going to hurt her loved ones, fully takes hold. As the tears begin to flow, she says she’d like them to remember her “as someone who tried really hard to be someone I couldn’t.” It’s a devastating admission, made all the more so because of how simple and unvarnished the presentation is.

The episode concludes with Ali driving Rue home in the rain. “Ave Maria” plays on the soundtrack, while the only image is again a long take of Zendaya in close-up, various emotions washing over her face as they go. The song choice and the take are a bit flashier than the rest of the episode, but still modest compared to how the series operated last year.

Obviously, this structure isn’t something Euphoria can deploy in every episode, or even in many of them. There’s a huge cast of characters with stories to service each week, and the series’ hyperactive style is a fundamental part of its DNA. And going the full My Dinner with Andre is much harder than it looks, requiring actors like these two who can be so compelling while so little is happening. But with Zendaya and Domingo, in these extraordinary circumstances, it not only works beautifully, but suggests that, at minimum, Levinson can perhaps take his foot off the gas a bit more often whenever Season Two begins filming.

A lack of restrictions was considered a key element in the the creative revolution that HBO led with The Sopranos, Sex and the City, and other groundbreaking series. Television has changed so much in the last two decades that this unfettered feeling is more the norm than the exception across cable and streaming. Sometimes, creators being able to do whatever they want whenever they want has led to incredible television; more often, though, it’s led to self-indulgent storytelling that would benefit from someone being told “no” periodically. The restrictions imposed on “Trouble Don’t Last Always” came not from Levinson’s bosses but from the challenges of a pandemic. The end result, though, is one where a little bit less of Euphoria as usual wound up being a lot more rewarding.