A review of “Nobody Has To Get Hurt,” this week’s The Deuce, coming up just as soon as I can’t read Kant…

“He talked too much.” -Bobby

The title of “Nobody Has To Get Hurt” (a quote from Rudy) suggests something very bad could happen by the end of the hour. So, for that matter, does the fact that it’s the penultimate episode of a Blown Deadline show that happens to be written by George Pelecanos. (Wallace would say hi, if only we knew where he was.) The episode is loaded with foreshadowing that pain or death will soon visit Marty Hodas (spared a bullet because Vince remains only half a gangster), Dorothy (who has angered both the pimps and even Dave, who washes his hands of her and the neighborhood), Loretta (whose work helping Dorothy has attracted the wrong kind of attention), Lori (who is ominously promised a farewell gift from CC after the wiseguys buy out his controlling interest in her life) or even Frankie (who laughs off the idea that he could grow old someday). It’s the sort of episode that challenges you to see how long you can watch with your breath held while waiting to see which characters get the short straw.

A body does drop by the hour’s end but it’s not any of the more obvious suspects. Instead, it’s CC, who gets too cocky about his ability to insult and threaten Bobby with impunity while seated in the French Parlor’s shabby back office. As CC keeps talking about Bobby’s wife, the scowl that Chris Bauer plays so well grows wider and wider until violence becomes inevitable. (Even the usually jocular Frankie has his head in his hands as he realizes how bad this encounter is about to get.) Bobby stabs him in the chest, the stunned CC tries to fight back and Frankie (whose sister CC has just spoken of so disrespectfully) finishes the job with a hammer. (Black Frankie, arriving late for a job that he should have handled himself: “Damn! Y’all murdered the shit outta that motherfucker.”)

It is both a startling death(*) and a necessary one, akin to a certain death from the Pelecanos Special late in The Wire Season Three. CC was one of this show’s most memorable characters and Gary Carr delivered an indelible and hopefully star-making performance in the role; but he had outlived his usefulness, both to his chosen industry and to the story. In fact, most of his arc this year involved him pushing back against Lori, Dave, Dorothy, Kiki and anyone else suggesting his pimping services might no longer be required. He had been terrified of his own obsolescence and as a result was lashing out at others — Lori in particular. On their final “date,” CC forces himself on her despite her clear terror and lack of arousal, then throws cash on the bed to make her feel like a whore one last time. (Or, as he bluntly puts it, like a “trick-ass bitch.”) She survives that encounter but it leaves an emotional scar as permanent as the physical one CC gave Dorothy back in the series’ first episode. Kiki gets her to the airport to start her new life in L.A., but there’s an emptiness in her eyes that wasn’t there when we met her, or even earlier this season when she began chafing against her servitude to CC. She has escaped but not without leaving a piece of herself behind. And with Lori finally gaining her freedom, CC has no role in the narrative beyond periodic reminders of how great Carr is.

(*) Well, mostly startling. In hindsight, the episode follows the pattern of last season’s penultimate episode (written not by Pelecanos but Megan Abbott), where Dorothy (then going by Ashley) seems in jeopardy the whole time, only she (like Lori) winds up leaving town, while a pimp (Reggie Love) abruptly dies as a result of being rude in the presence of a man (Leon) who had lost his patience for it. (For that matter, it’s Melissa‘s pimp both times. If she’s still around either in the finale or after the next time-jump, I wonder if the other pimps will be steering clear of her as a bad-luck charm.)

So CC dies ugly, even as the episode concludes with many other characters still seeming to be in jeopardy. The wiseguys still don’t know who took a shot at Vince or why, and if it’s an independent operator, then Rudy’s new partnership with Matty the Horse won’t protect Vince. CC, for all his hatred of Dorothy, was the one man at that summit of pimps cautioning the others against killing her now that she’s a civilian. With him out of the picture and Dave no longer in her corner, will the bad end I feared for her near the end of last season happen at the end of this one? (When Loretta warns her that the girls are the ones who are going to get cut, Dorothy doesn’t even flinch, despite remembering all too well how that feels.) Darlene is now explicitly looking to get out, but we’ll have to see if Larry will let her. Meanwhile Barbara returns from prison rightfully bitter that she took the fall for Larry at the end of Season One(*), didn’t roll on him to the cops, and he didn’t so much as visit her in the last five years. Darlene is able to cool down their confrontation and even wordlessly tell Larry to hand over every dollar he has on him, but there’s a defiant look in Barbara’s eyes and a disapproving one in Larry’s that suggests the two might not be done with each other yet(**). And Rodney, now just as in thrall to his own addiction as Shay is to hers, is looking to rob a pharmacy, which won’t end well for somebody.

(*) This is a relatively deep dive, given the number of characters this show has and how far down the bench Barbara was last season. I had to check my notes from the Season One finale to remember all the details, including the fact that Larry told CC that Barbara was loyal “like a dog,” thus he didn’t have to worry about her ratting him out.

(**) If the other pimps really want no part of Melissa, maybe she and Barbara finally get to run off together? 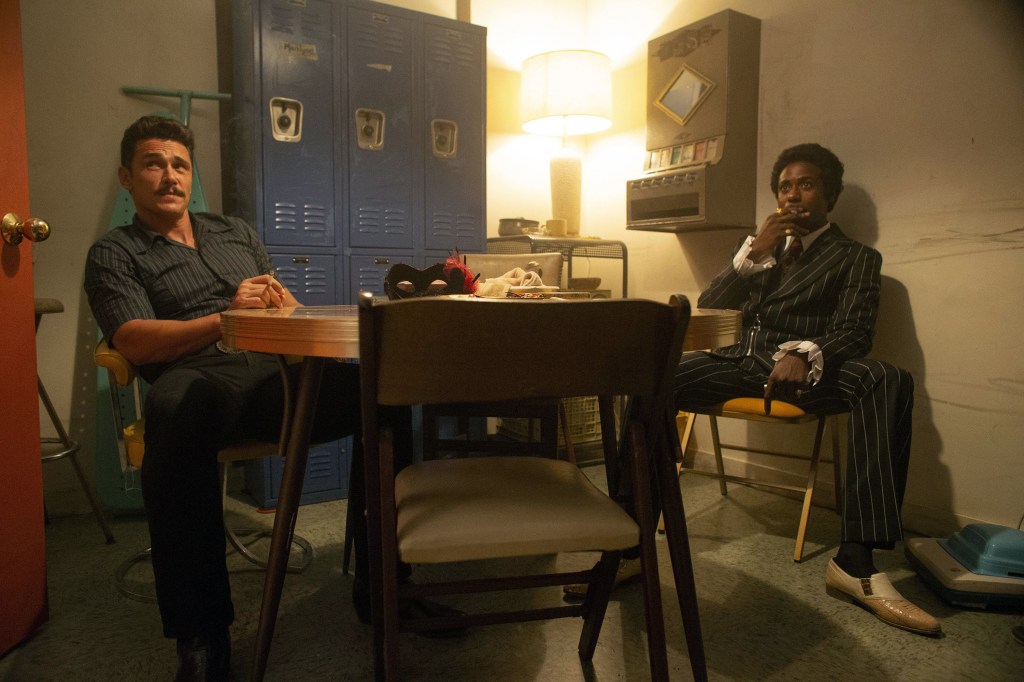 The greatest reason for optimism this late in the year is Red Hot, which everyone is convinced will be a huge hit. Lori got a lucrative contract and freedom from CC as a result of it. Rudy and Matty brokered a truce based in part on them realizing they were both investors in the picture. Candy is convinced it’ll give her a chance to keep directing movies and even take Adam on a true mother-son vacation to the Jersey Shore (despite him still being oblivious about the kind of movie Red Hot is). But things don’t generally turn out the way we or the characters hope they will. We know that Candy, Frankie and Harvey have sold away a large percentage of the movie, if not all of it, to their investors, and the wiseguys are already talking about taking the picture away from Candy (even as she and her boyfriend are still editing it) because they know better than she does how to sell it. Some kind of bittersweet resolution feels in the offing before we say goodbye to the Seventies for good and dive into the third and final season.

But hey, at least Candy seems likely to survive until then. Kiki asked Rudy not to kill CC so that Lori’s liberation from him would be clean. As it turns out, Rudy could have saved the $15,000, since CC dies anyway at Bobby and Frankie’s hands. He was a problem nobody wanted around anymore. So now he’s gone. The show will miss him, but none of its characters probably will.

* Vince’s near-death experience, his dissatisfaction with working for Rudy and the growing distance between him and Abby inspires him to go home to see his father, played by Armand Assante (The Mambo Kings). Mr. Martino is old-school and seems to think the solution to all of his son’s problems is to go back to Andrea and their boys. The season has alluded a few times to the family Vince abandoned but Andrea and the kids feel too far removed from the man he’s become, on top of the couple’s basic incompatibility.

* Gene Goldman‘s latest sexual encounter with a man provides him with an opportunity to (like Ed Koch himself) refute being labeled a gay man: “I’m sexual. I’m a husband and a father. And I like to be with men. Don’t try to make me into one thing.”

* Goldman also puts Chris on the trail of the men who own many of the buildings that the Gambinos and Genoveses are using to run their sex businesses. Seems a bit late in the season to turn our favorite detective into a retro Lester Freamon, but perhaps this is a trail he’ll still be following when we land in the Eighties next season.

* Another Wire nod: Frankie has sex with Victoria from the 366 while admiring his reflection in her bathroom mirror, just like a certain Baltimore city councilman once did.

* One thing working in both Darlene’s and Barbara’s favor: Larry is, as Loretta has complained, really focused on his acting career. Here, he not only protests his exaggerated and stereotypical dialogue while playing an escaped slave, he lectures a bored Darlene on how he’s modeled his screen persona on Woody Strode, a former NFL receiver turned actor probably best known for fighting Kirk Douglas in Spartacus.

What did everybody else think?