A review of this week’s The Deuce, “Normal Is a Lie,” coming up just as soon as I have my own bathroom…

“I really don’t give a shit what people say or what they think,” Candy tells Hank early in “Normal Is a Lie. “There’s too many people who are weighed down by how other people see them — like, how they look to other people.”

Much of the vice business depends on looking a certain way to the people offering up their money for your work. Yet many of the characters on The Deuce have long since stopped worrying about how they appear to the world. Candy lives her life publicly, even under an assumed name. Lori is proud to be a porn star, just as she was once proud to stroll the Deuce. Whatever problems they’ve developed as a couple over the years, Vince and Abby have never seemed the least bit embarrassed for people to know the very flexible nature of their relationship.

But pride in who you are and what you do can sometimes run up against a world conditioned to look down on those who live outside certain socio-economic norms. As Joey brags to his father about being accepted by his new Wall Street pals, Bobby warns that Joey will always be seen as the street kid who can get them women and drugs. In the midst of that conversation with Hank, Candy has to admit that her son Adam (now 20) has escaped her reach — the implied result of her becoming so visible in the wake of Red Hot, based on how last season ended — which we also see clearly hurts her parents. Even as an adult movie star, Lori is often treated as as second-class citizen, derisively mocked by a director when she asks for a condom to be used in one of her scenes. No matter how far anyone climbs, there will always be someone ready to make them feel like they’re still an outcast back on the Deuce.

But one of the common threads running throughout this episode is how many characters are inclined to change their current circumstances — often weighing (in a recurring theme for Simon/Pelecanos shows, particularly Tremé) the value of artistic integrity versus commercial success.

Lori is trying to raise professional standards on the porn sets where she works, despite Kiki‘s warning that the best they can do is to improve her own working conditions. But she also gets to be the hot girl in a hair-band music video, and the flirtatious guitar lessons with a member of the band seem to kindle a genuine interest in music. When she later wanders into a bar with an open mic night, the prospect of getting up and singing in front of strangers seems intriguing. (Greg, meanwhile, is interested in starting his own production company, but there’s definitely an air in that relationship of him trying to be her new pimp, whether he calls himself that or not.)

Candy is, as she was with Red Hot, struggling to find money for her new project. But for now, she refuses to take it from Hank, whose description of himself as “your man” is a reminder of how hard she worked not to have a man when she was turning tricks. Candy wants her independence above all else — Harvey is the closest she’s ever come to leaning heavily on a man for help and guidance, and their relationship is in an ugly place at the moment — which seems destined to create difficulties for her as both a filmmaker and a woman dating Hank.

Joey convinces Bobby that using the parlor women for outcall can be a solid new business model, though Black Frankie is reluctant to further cut the girls out of the money that everyone is making off of their labor. Vince offers Mike a chance to run his own club, in the way Rudy once did for Vince. Abby keeps looking for causes to spend Vince’s money on, and in the process falls for street artist Pilar. And Todd, aware of his very fleeting mortality as his condition becomes more serious (and harder for even a sympathetic makeup artist to conceal), tells Paul that he might quit the soap to spend his remaining time on work that matters. 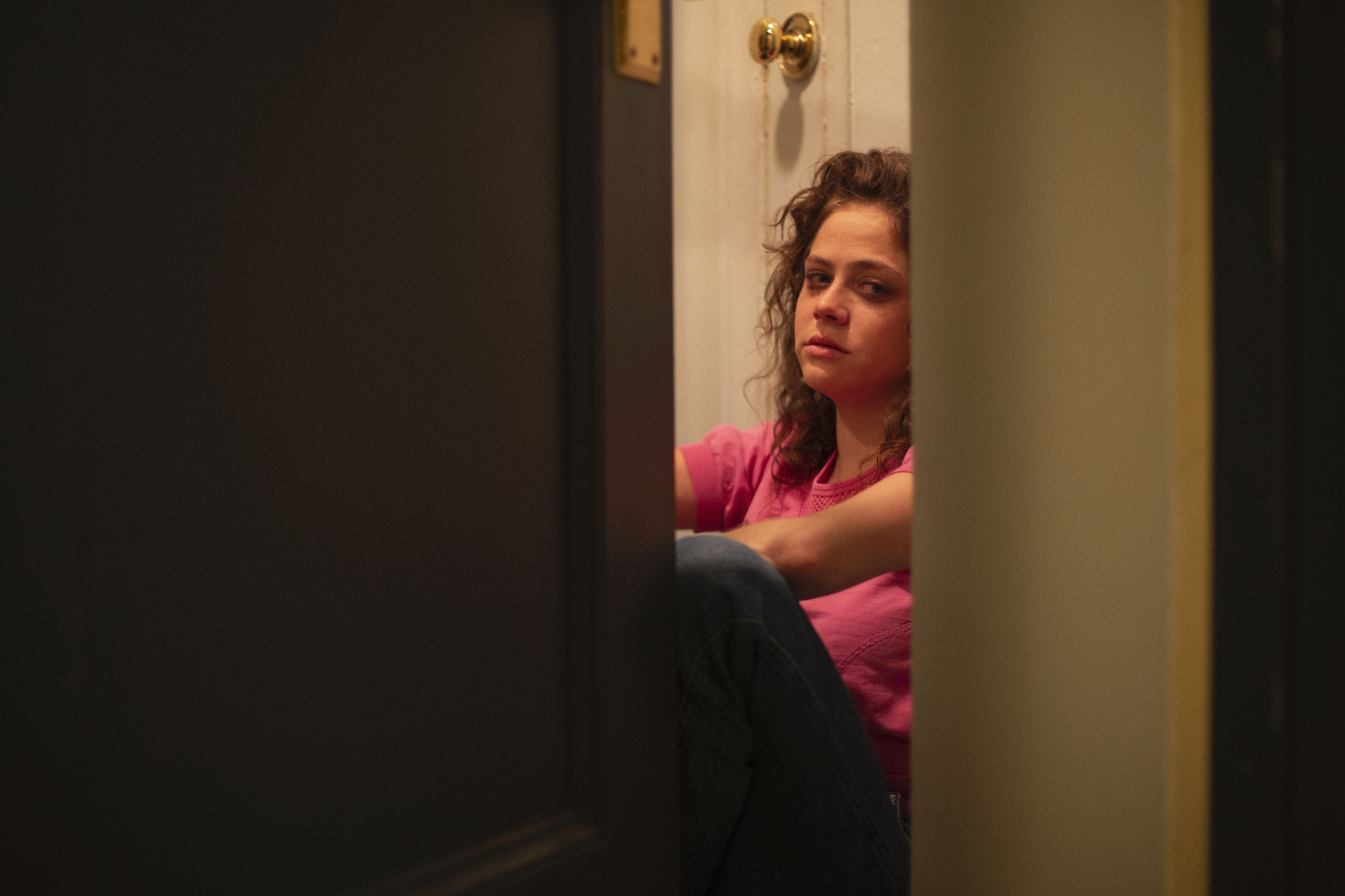 Olivia Luccardi as Melissa in this week’s episode of ‘The Deuce.’ Photo by Paul Schiraldi/HBO

The episode’s most memorable story involves a character who is perfectly content with who she’s become and what she’s doing — until the man who drove her away from her old life and into this one returns to remind her of how she got here.

Melissa‘s past arrives on her doorstep in the form of her imposing father, Matthew Ross, played by Tremé alum (and all-around great character actor) David Morse. His drinking and other behavior drove her (birth name: Margaret) to run away from Michigan and wind up on the street. But she’s content with the life she’s built in porn, and he’s now two years sober. She’s understandably terrified of the man he used to be, and of letting Margaret’s life bleed into Melissa’s. But other than his insistence on returning to her door day after day, he’s not aggressive, nor is he judgmental. He’s full of remorse for what he did when he was drunk, tells her what’s been happening in their family, and has no objection to how she makes her living. He’s just glad she didn’t die on account of him, and wants to see her. It is clearly a big ask — and he guilts her at one point by talking about how children forgive because “they need to believe in you, I guess” — but also something that Melissa’s friend Reg can tell that she wants to do.

It’s a superb collection of scenes, with Morse and Olivia Luccardi separated only by the two inches of her apartment door (the shot of them seated with their backs to the door was particularly potent), and Melissa’s decision at the end to open the door and implicitly invite him in is powerful because of how hard it is for her to do it. Candy often rolls her eyes at the suggestion that she got into sex work because of how her father treated her, but the larger cliché has truth to it, and obviously in Melissa’s case. But when his coworker told him about seeing Ross’ daughter in a porn tape, Ross felt only relief, not offense at how she makes her living. In an hour where almost everyone else is being judged, she’s just being accepted, and he’s eventually being forgiven. It’s not the way either of them once would have wanted things to go, but it’s good enough after so much time and pain.

* Party like it’s 1985: Ross tells Haddix that he has to get more cash from “one of those new bank machines.” This was around the time that ATMs became widespread enough to be more than a novelty. Abby’s friend Maeve is involved with a lawsuit regarding Michael Stewart, the graffiti artist who was beaten to death by the NYPD in 1983.

* Funniest moment of the episode: Bobby assumes that Black Frankie lives in his van, and when Frankie indignantly replies that he has his own home, a mystified Bobby asks, “How come I never been?” As Louis Armstrong put it, if you have to ask…

* The inherent charm of Lawrence Gilliard Jr. aside, the Alston and Goldman portion of the show — which here involves Chris unsuccessfully trying to bully the problematic building owner with an unflattering New York Post story — still feels comparatively lethargic and disconnected from everything else. The subplot is trying to illustrate another angle of how vice transforms the city, and vice versa, and hopefully the payoff is worth all the time we’ve spent on it. It’s just a struggle at the moment.

* Finally, this week’s music: “She’s a Devil” by Contagious (Lori’s music video); “Subway Theme” by Grand Wizard Theodore (the art gallery fundraiser); “Waters Part” by Let’s Active (Candy at the Hi-Hat); “Steady Action” by Nona Hendryx (Tommy sees Frankie at Club 366); “I Wanna Rock” by Twisted Sister (the Wall Street guys party); “Do It (‘Til You’re Satisfied)” by B.T. Express (Alston at the diner); “Go Bang #5” by Dinosaur L; “One Step Up, Two Steps Back” by Betty Wright” and “Angel in my Pocket” by Change (Abby and the others at Paradise Garage); and “Make Me a Believer” by Luther Vandross (Rudy confronts Frankie at 366).