A review of this week’s Better Call Saul, “Wexler v. Goodman,” coming up just as soon as I enjoy cold pizza fondled by community theater actors…

What happens to Kim?

This is the biggest question left for Better Call Saul. Arguably, it’s the most important question of the entire series. There have been smaller mysteries solved (why Jimmy changed his name, Mike’s reasons for teaming with Gus), and there are a few other dangling plot and character threads in need of tying off before the series concludes, particularly involving Nacho and Lalo. But we know how this story ends for Jimmy, Mike, Gus, and several other characters — and that it won’t be a good ending for any of them. Kim, though? Her future is a riddle wrapped inside an enigma, and one that’s as much about defining Saul Goodman’s story on Breaking Bad as about concluding her own arc on this series. Does she die? Is her career ruined by her association with Jimmy? Do the two of them just drift apart? Is there a chance, as Odenkirk, Seehorn, and others have suggested, that Saul Goodman went home every night to Kim Wexler?

The unnervingly titled “Wexler V. Goodman” seems to suggest one ending for Kim — and much earlier than any of us might have wanted — before veering off in a much more troubling direction. First, though, it provides us a fuller picture of Kim’s origin story. The teaser takes us back to her childhood in Nebraska, where she’s lingering outside her middle school long after her mother(*) should have picked her up from band practice. She’s so young, and looks extra vulnerable standing next to that huge cello case. But even as a grown woman, Kim’s strength has always been more mental and emotional than physical. She wouldn’t win a fist fight with one of the Cousins, but she wouldn’t be intimidated by them, either. When her mother finally shows up, Kim is smart and strong-willed enough to recognize what a mistake it would be to get a car driven by a drunk woman. So she sets off to walk the three miles to their house, over her mother’s indignant, hurt protests. She doesn’t pause, doesn’t look back; she knows what she needs to do, however hard it may be, and she does it. The scene matches up not only with what Kim told Everett Acker about her childhood, but with the woman we’ve seen that girl become. Kim wants to take on everything herself because she spent a long time being taught that this was the only way she could expect anything to get done and done right.

(*) Between the lighting and the similarity in voice and mannerisms, I at first wondered if that was Rhea Seehorn under a wig and a bit of makeup playing Kim’s mom. But no, that’s actress Beth Hoyt, who looks a bit like Seehorn and, again, does a convincing approximation of her performance as the adult Kim. For that matter, as the young Kim, Katie Beth Hall seems very much like she could grow up into our favorite banking law expert.

The teaser also speaks to the reasons she’s drawn to Jimmy. He’s not a drunk like her mom, but he’s nonetheless addicted to the con. He is never happier than when he’s running a play, as we see in the joy on his face as he directs the fake commercials he plans to use to blackmail Kevin. When Kim, chastened by her argument with Rich in “Dedicado a Max,” decides to call off the play and arrange a modest settlement for Acker, Jimmy’s disappointment is much more about not getting to finish the grift than it is about the potential money involved. 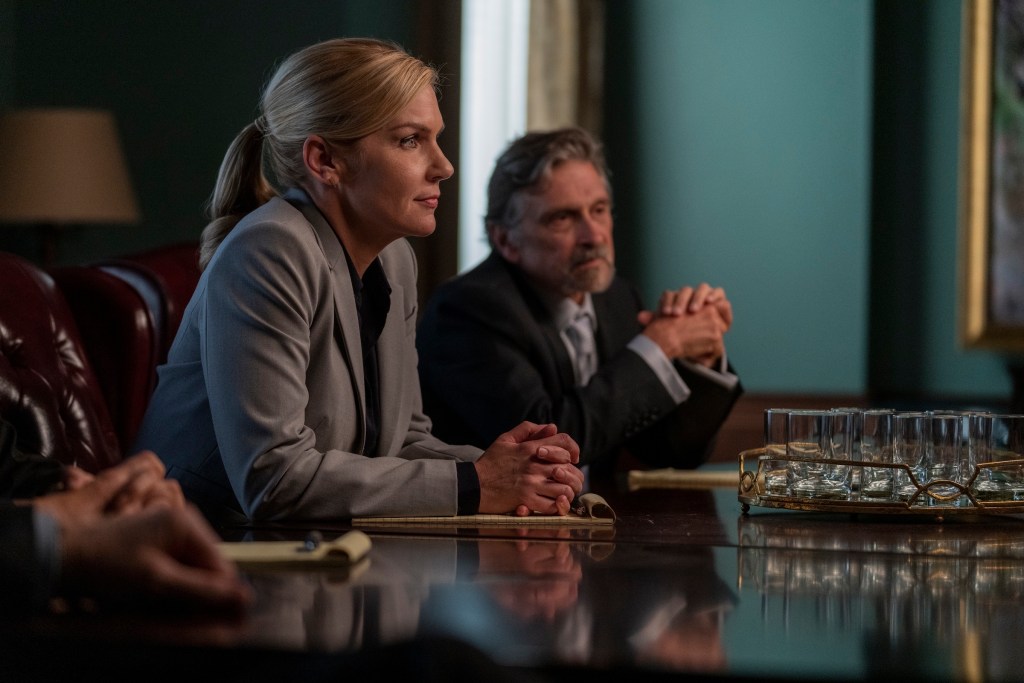 “It’s just not worth it,” Kim insists, and Jimmy reluctantly agrees in the moment. And for a few minutes afterward, we get glimpses of the more responsible and decent guy that he’s capable of being. He agrees to cancel the play and clean up the nail salon before Mrs. Nguyen opens in the morning. When next we see him, he’s declining a freebie offered by two sex workers as an extra thank-you for his legal work, and even expressing concern that they’re going right back to work. But then his mischievous, damn-the-man side takes over, and it occurs to him to instead hire them for another emotional attack on Howard Hamlin. While Jimmy’s old nemesis Cliff Main watches in dismay, the prostitutes pretend that Howard is a regular client in debt to their pimp Joe Dog(*).

Jimmy’s pleasure in seeing one rich swell taken down a peg inspires him to keep going, and to resurrect the various schemes he and Kim had planned to deploy against Kevin. We know it’s coming long before Kim does, which only makes her stunned reaction in the Schweikart and Cokely conference room that much more painful. Jimmy gets exactly what they originally wanted — Acker keeps his house and gets some cash, and Kevin even has to pay extra for the rights to the Mesa Verde logo — but it’s not at all what Kim is looking for by this point. As she will say later on in the discomfort of their apartment, “You made me the sucker — again.”

As she arrives home, Jimmy is plucking away on the guitar at “Smoke on the Water,” which was his old partner Marco’s favorite song. The show uses it as a sign of whenever Jimmy is getting close to being Saul Goodman in more than name. Kim doesn’t know the importance of the song, but she recognizes that the man who pulled that stunt is very different from the one she wants to build a life with. And for a few agonizing moments(*), it seems like the episode will end with their relationship torn asunder, and Jimmy with no more obstacles towards going full Goodman.

(*) As I’ve mentioned, I’m working on a Rhea Seehorn feature coming soon to this here website. A few of the people I spoke with suggested that the reason her performance — consistently one of the very best in all of television — has yet to even get an Emmy nomination is because of how controlled it is. Even as an adult, Kim is still that girl left waiting in the middle school parking lot, unwilling to let anyone see how upset she is, so a lot of Seehorn’s work has to reveal a lot to the audience while concealing the pain from Jimmy and others — a subtle kind of acting that doesn’t always get awards love. Here, though, she demonstrates just how powerfully she can play a moment where Kim isn’t trying to hide the hurt.

But that would be too abrupt an exit for the show’s most beloved character, and too simple a transition from Jimmy to Saul, especially with nearly a season-and-a-half of the series to go. Instead, the episode ends with a reminder that Kim is an addict, too; her weakness just happens to be for lovable but damaged people like her boyfriend and occasional partner in crime. So even though she has just spent several minutes clearly articulating why she can’t trust Jimmy and they are better off going their separate ways, she concludes the episode by suggesting, “Or maybe we get married.”

It is a terrible idea. Even Kim seems to know it. This is not a romantic proposal in any way, but the brainstorm of a defeated woman who recognizes that, for once, she’s too weak to pick up her cello and walk away. She’s going to hop in and ride along until they’re run off the road. As someone deeply invested in the life of this fictional character turning out OK, it’s something I don’t want to see. But as a masochist who loves this show and its predecessor most when they’re at their ugliest and most punishing, I can’t wait to see how Seehorn, Odenkirk, and company play out the car wreck that’s clearly coming. 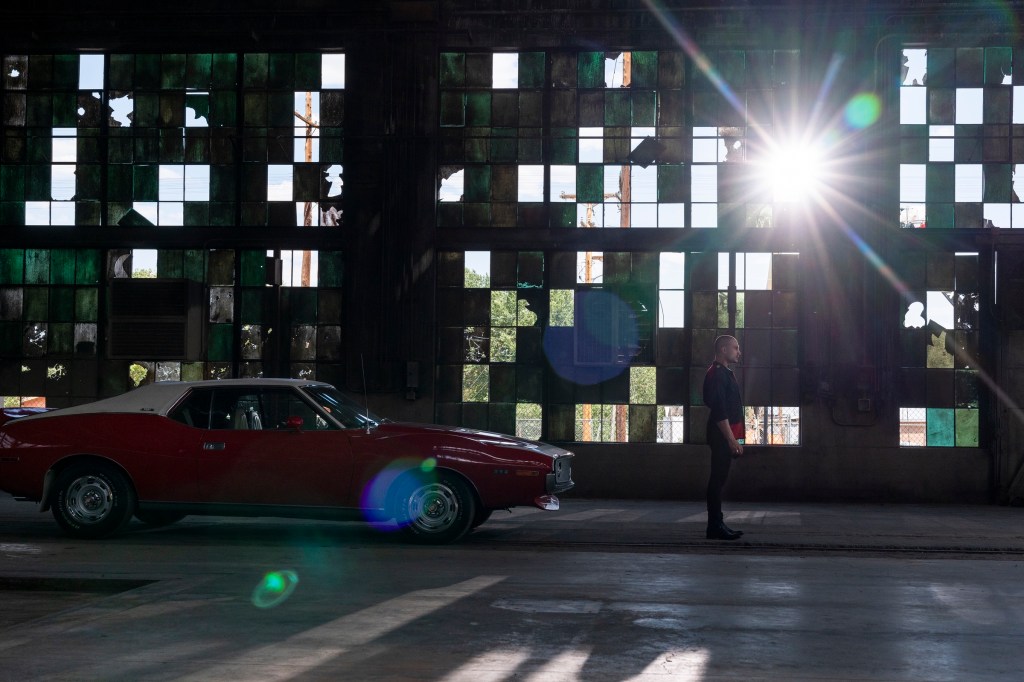 * Last week, I argued that Gus might need to work harder to convince Mike to reunite with him. Instead, this episode picks up with Mike firmly back on Team Pollos, much to the dismay of Nacho, whose life has intersected with Mike’s throughout the series. On the one hand, it feels like a rare occasion where the creative team skipped a few steps; on the other, it’s good to just be getting on with things, and to see Mike back in action as he sets up Lalo to be arrested for murdering the TravelWire clerk last season. This will almost certainly prove more complicated than it seems — if only because it feels like Jimmy needs to build up more history with Lalo before he would invoke his name in his first Breaking Bad appearance — but in attempting another nonviolent solution (like he used with Tuco), it seems that Mike still has some steps to walk before he’s fully the guy we met on the other show.

* Seeing Mike pose as both a private detective (with the nervous librarian) and a veteran cop (with the nervous rookie) was a reminder that Jimmy’s not the only great would-be actor in this group. (It’s one of the few things they have in common, and could ultimately be one of the reasons they wind up working together again, though I suspect the explanation will have more to do with providing Mike with some kind of cover job.)

* Also, Dave Clark is a longstanding alias of Mike’s, going back to the Breaking Bad Season Five premiere, where he claimed to be a postal inspector with that name while trying to find out what happened to Gus’s laptop.

* Howard’s become a pretty marginalized part of Jimmy’s story, so his frequent absences from episodes don’t stand out; when he appears, it’s fun, but it’s not a big deal when he doesn’t. Nacho, on the other hand, is not only a key piece of the Gus/Lalo war, but someone with a compelling arc of his own — after Kim, he’s the most important character remaining whose future is a blank slate. So every time he pops up after taking a few episodes off, it feels like the show has lost some momentum with him. It’s tough to juggle a lot of characters, and I wouldn’t want to shoehorn Nacho into an episode where he didn’t belong, but it’s still a bit awkward whenever he reappears like this after a few weeks.

* The oft-discussed photographer Olivia Bitsui was named after the daughter of Jeremiah Bitsui, who’s been part of the Breaking Bad/Better Call Saul family for years as Gus’s henchman Victor.

* Always a pleasure to see the return of Jimmy’s nameless film crew, who here throw together a few dozen fake commercials in a single night. And if we didn’t already know this show was a period piece, we sure would from the moment where Jimmy places both hands on the face of one of his actors to help her improve her performance. Understandable (mostly) behavior in 2004, but from a social distancing perspective? Yikes.

* Finally, that was Bob Odenkirk’s former Mr. Show co-star Jay Johnston as Kevin’s father Don in the vintage Mesa Verde ad. Nice to see the two actors sort of sharing a scene, even if they weren’t discussing whether 24 is the highest number.