A review of this week’s Better Call Saul, “Dedicado a Max,” coming up just as soon as I make my own cell phone charger…

“It seems to me that you are at a crossroads.” —Gus

Throughout the run of Better Call Saul, Kim Wexler and Mike Ehrmantraut have represented two very different paths for our main character. Kim is the path we want Jimmy to stay on; Mike is the path we unfortunately know he will take. Because those paths diverge so wildly, the two characters that represent them have yet to meet through four-and-a-half seasons of the show.

Midway through “Dedicado a Max,” we come as close as we ever have to Jimmy’s once and future partners sharing a scene, as Kim listens in on Jimmy’s side of a phone call to Mike. The call is played for laughs, as Mike has no time for Jimmy’s nonsense while he’s recuperating down in Mexico. (Jonathan Banks’ weary delivery of “I’m in a tunnel” is a thing of deadpan comic beauty.)

The moment for Mike to take on work with Jimmy/Saul isn’t here yet, and who knows if he and Kim will ever speak to one another. But the near-intersection between the two of them comes in an episode where both are faced with the same question: Should they retreat into a safe and honest life, or to push into more reckless and potentially exciting territory? In both cases, they opt for recklessness.

The hour does a more thorough and convincing job of detailing how Kim reaches this point than it does for Mike. Much of her half of the episode plays out in charming caper fashion, as Kim and Jimmy run a series of elaborate short cons right under the nose of Mesa Verde, because Kevin mistakenly believes that the chief scammer is Everett Acker, and not his favorite attorney. It’s been a recurring theme of her relationship with Jimmy that they seem at their happiest and most connected whenever she’s willing to step over onto his side of the ethical line. Here, we see this play out with the delightful scene where Jimmy encourages Kim to role-play as Kevin so he can properly enjoy the story of her latest grift. Kim’s Kevin impression is pretty broad (more on this below), but within moments, Jimmy is expertly playing Kim(*), and then it veers into a sex game without any warning at all.

(*) It’s so expert that I burst out laughing later in the episode when Kim made the same hand gesture at Rich that Jimmy had used while copying her. 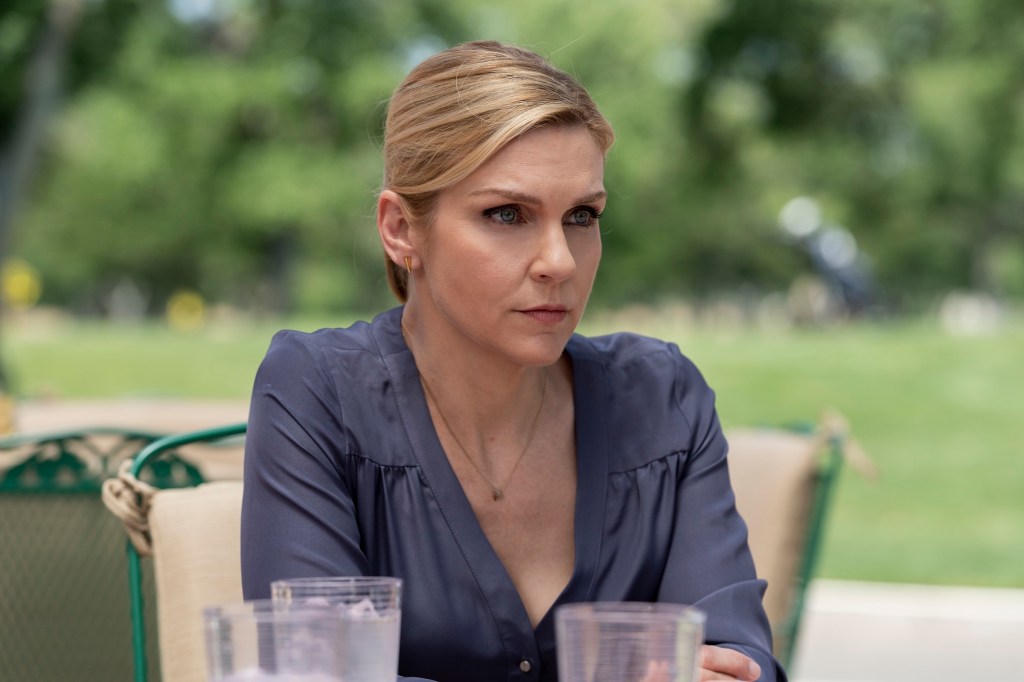 Ultimately, though, Kim isn’t doing this to feel closer to Jimmy. She’s doing it because she’s mad at Kevin, at Rich, at Mesa Verde, and even at herself for not disentangling from this problem sooner. She may not consciously be trying to sabotage her job at the firm, or her status as the bank’s top lawyer, but her fury and her need to control things has led her onto some very shaky ground. Rich sees through Kim’s puppeteering — a smart narrative choice, since it defies credulity that everyone involved at this level would be hoodwinked — and quietly tries to assign her to other cases to protect both her and the firm. Instead, it inspires a public scene from Kim that could have easily resulted in her dismissal. Even if her anger begins as an effort to protect Acker and the scheme by staying on the case, she takes it way too far when she continues the fight out in the hallway in front of half the firm. This is no longer Kim the ice-cold manipulator, but Kim the hot mess.

Even Jimmy knows she is taking this too far. Like Rich in that hallway, he tries giving Kim every possible way out once it seems like they’ve run out of maneuvering room to save Acker’s house. For once, Jimmy is being the responsible one, while Kim can’t let go of the need to win and get over on her social superiors. As entertaining as it is to watch her and Jimmy whenever they’re in cahoots, if he’s the one advising her to stop, she has placed herself on extremely shaky ground.

Where Kim makes a clear choice at her professional crossroad, the episode technically ends with Mike still considering between the two paths Gus presents him: going back to civilian life and marinating in guilt and anger, or signing up for Gus’ cold war against the Salamancas. We obviously know what he’ll choose — if not in the next episode, then soon — but “Dedicado a Max” doesn’t lay out a hugely convincing case for why he’ll choose Gus.

We discover that the village he woke up in at the end of the previous episode, a day’s drive south of the El Paso-Juárez border, was constructed by Gus as a charitable tribute to his late partner Max. Mike’s injuries heal up with some help from Dr. Goodman(*). It’s a nice place, and Mike fits in well once he accepts the idea of staying for a bit. He can enjoy watching children play even while he’s estranged from Kaylee, and he can put his bountiful home-repair skills to good use. By the time he’s healthy enough to leave, you almost get the sense that he could just stay for a while.

(*) Years later, remember, Goodman will patch up the bullet wound Mike receives during Gus’ grand revenge on Don Eladio. Mike’s impatient to get home that time, too. 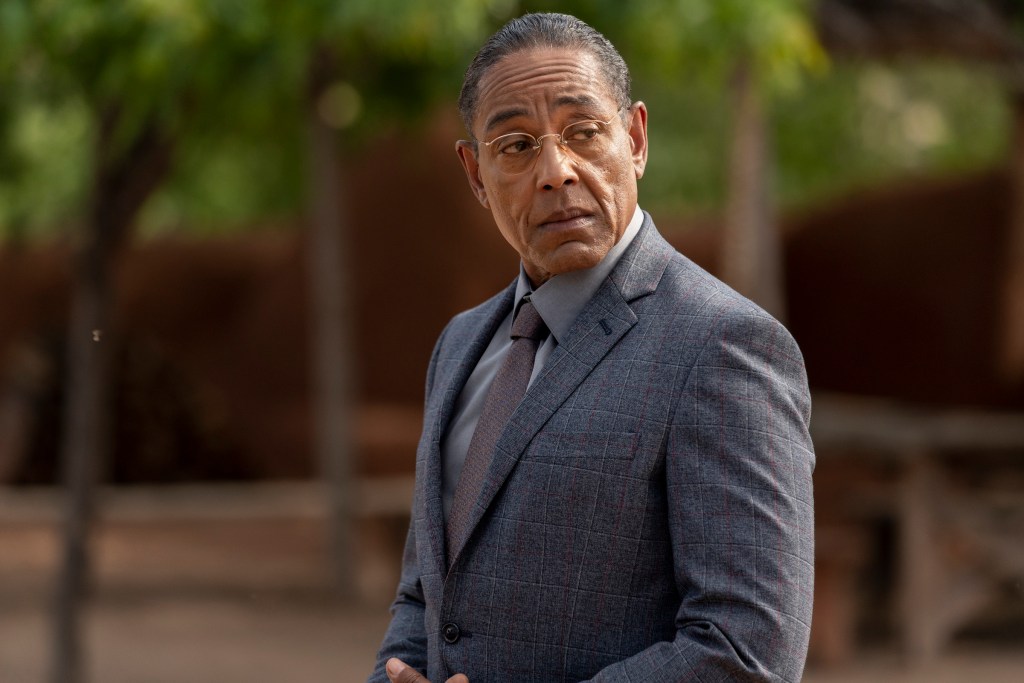 Instead, Gus arrives and meets him at the fountain bearing Max’s name. He presents himself as a relatively good and moral drug dealer — more artfully than Walter White will in a few years, but still deeply hypocritical — that Mike would do well to work alongside. And he frames the war in terms Mike can also appreciate: as revenge. Mike still owes them for the murdered truck driver, and it was Lalo’s tenacity that led to Werner having to be executed rather than sent home. It’s not a bad point for Gus to make in his favor. But the case against just going home to Kaylee and Stacey doesn’t entirely ring true. Mike’s in a bad way right now, but that’s in large part fallout from the job he already took for Gus. Which seems more likely from this point: a) That Mike stays a civilian, and within weeks, or maybe months, he is playing with his granddaughter on the regular again, or b) That Mike goes to work for Gus and never has to do anything that will linger emotionally when he’s around his family? These seem like odds that should be easy for Mike to measure in favor of rejecting Gus, yet the episode seems designed to explain why he would instead accept the offer. Yes, Gus has built this nice place in the middle of nowhere, but he will be asking Mike to murder people — even if they’re bad people. The potential for messiness, and for it to bleed onto Kaylee (metaphorically, if not literally), just seems way too high.

Maybe the next episode will more thoroughly explore Mike’s thought process before he ultimately becomes Gus’s button man. But his time in the village feels more like a pleasant interlude than a strong dramatic argument for taking him one big step along the way to the guy he is on Breaking Bad.

I’ve often thought that it would be nice to see Kim and Mike meet at some point before the series ends, if only because Rhea Seehorn and Jonathan Banks have such abundant and amusing chemistry whenever they appear together in public. For a long time, it felt like they couldn’t possibly come into contact, because Jimmy would be moving away from Kim’s world and rules and toward Mike’s. Now, though, Kim’s parallel path seems in danger of taking a sharp turn toward Mike’s, and suddenly the prospect of seeing them share a scene doesn’t feel so fun anymore.

* Last week, I had a great interview with Rhea Seehorn that’ll run sometime later this season. When we discussed her role-play scene, she said her big question for the creative team was whether Kim was supposed to be good at imitating Kevin or not. Everyone decided that Jimmy is the great actor in the relationship, and that Seehorn shouldn’t sweat the impression very much. Rex Linn, who plays Kevin, wound up on set that day, watched the scene, and even teased Seehorn after, “I don’t sound like that at all!”

* The discussion of Kevin as a side-sitter felt extra funny because side-sitting was a Curb Your Enthusiasm topic a few weeks back.

* With Mike unavailable, Jimmy asks the local veterinarian/crime concierge for another investigator, and winds up with the bearded, intense, “Mr. X.” If actor Steven Ogg looks familiar from this series, it’s because he appeared back in Season One’s “Pimento” as the loudmouth easily disarmed by Mike in a parking garage. The character in that episode was never referred to by name, though the script called him Sobchak, since writer Thomas Schnauz had John Goodman from The Big Lebowski in mind when he wrote it.

* Meanwhile, if the construction foreman’s voice sounded familiar, that’s because he was played by ace voice actor John DiMaggio, a.k.a. Bender from Futurama, among many other roles.

* Mike trying to cobble together a homemade cell phone charger out of stray bits of electronics debris seemed like it would be one of his most impressive feats of MacGyverism. Instead, the scene has an amusing punchline when his hostess emerges with the exact charger he needs to get back in touch with her anonymous benefactor.

* Jimmy may be operating professionally under a new name, but he still likes to change addresses on things to cause problems, here borrowing the same gimmick he used to steal Mesa Verde out from under Chuck as the first of his many gambits to keep Mesa Verde from stealing Acker’s house.

* The song playing over the montage of Kim pretending to be frustrated by Jimmy’s various scams is Stanton Moore’s “Blackbird Special.”

* Finally, Jimmy’s love of old movies plays out beautifully when we see him spreading the slightly radioactive smoke detector residue onto Acker’s property using the same method Ashley-Pitt invented to dispose of tunnel dirt in The Great Escape.