Fans of Stranger Things have had fun picking through all of the Netflix hit’s retro references, from the copious E.T. homages to that John Carpenter-esque synth score. But the best nod to the past isn’t the hairstyles, the marathon Dungeons & Dragons campaigns, or even the soundtrack full of New Order and Echo & The Bunnymen songs. No, the real stroke of nostalgic genius is the casting of Winona Ryder as distraught single mom Joyce Byers. From the moment the actress appears, the pulse of every 1980s kid starts to quicken.

For those of you who didn’t grow up watching Heathers, Beetlejuice and Lucas on a loop on cable and VHS, it might be hard to understand why so many people have looked at Ryder’s turn in the Netflix show as the single best callback moment of 2016. Few would call her the best actress of her generation, though her skills are often (and severely) underrated. And though countless young men and women had a crush on her in the Eighties, she was never a sex symbol per se. She stood for something purer — something that Stranger Things creators Matt and Ross Duffer seem to innately understand, even though the twin brothers were born in 1984.

Put it this way: It makes perfect sense that the Ryder who starred in Beetlejuice would grow up to play the mother of a sweetly nerdy little kid like Will Byers. Director Tim Burton gets a lot of credit for turning pretty-boy heartthrob Johnny Depp into a goth weirdo in Edward Scissorhands. But the filmmaker actually got there with the actor’s costar two years earlier, styling Ryder as a surly, death-obsessed adolescent way back in 1988. Her hilariously mopey performance as Lydia Deetz was completely unlike the any of the bland, moussed-up high school princesses and princes that Hollywood leaned on to win teenage audiences 30 years ago. Just by frowning and cracking sardonic jokes, Ryder became a huge hero to young outsiders across America.

One of the big keys to the actress’ success back then was her authenticity. In interviews, Ryder talked about growing up in a family of hippie intellectuals, and being a fan of author J.D. Salinger and heartland punk heroes the Replacements. She carried that edginess and deep interior life into her most iconic performance, as the anarchic socialite Veronica Sawyer in the 1988 cult comedy Heathers. A self-hating preppie, Veronica sabotages her high school’s social order with the help of a sociopathic bad boy named J.D. (played by Christian Slater, who himself has been trading off his Eighties screen persona lately in the hip, hit TV drama Mr. Robot). Ultimately, J.D. takes things too far, and the heroine has to cut herself loose both from her hateful, shallow clique and her nihilistic boyfriend. Again, Ryder’s character resonated with the generation of alterna-kids who felt alienated from the Reagan-era’s conservative, materialistic values — even the ones who didn’t want to blow up their school. 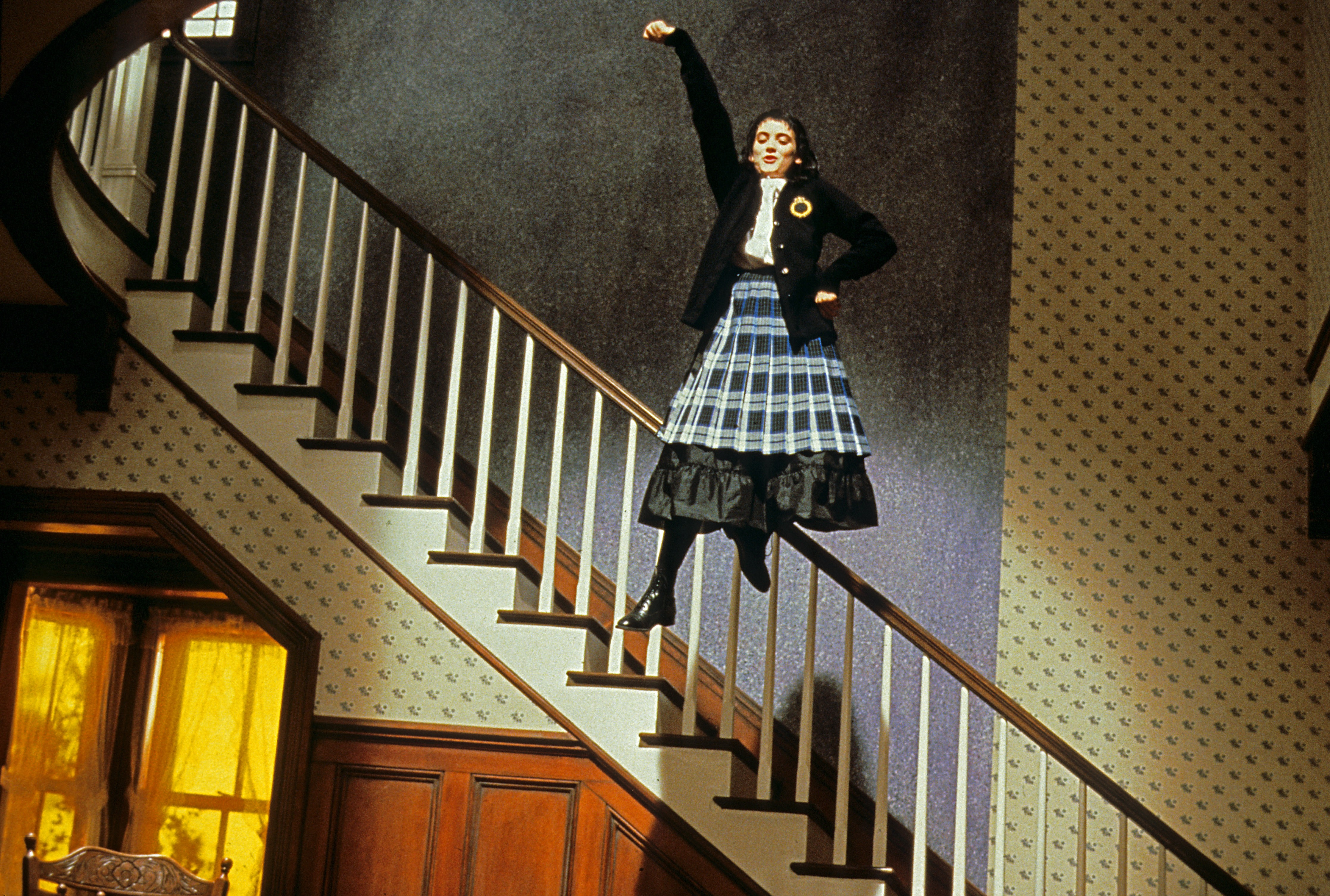 As it turned out, there were a lot more Lydias and Veronicas lurking in the shadows of American culture than anyone had reckoned with. In the 1990s, the oddballs had their day: Nirvana topped the charts. The Simpsons became a sensation. Quentin Tarantino shook up the movies. Matthew Sweet wrote a beautiful pop song about “my little movie star,” titled “Winona.” In a righteous world, this should’ve been her take-over-the-world heyday.

Instead, the Clinton era was were rough for Ryder — although she did make a few terrific movies. She’s strong in her segment of Jim Jarmusch’s 1991 anthology film Night on Earth, playing a chain-smoking L.A. cabbie shuttling Gena Rowlands around, and wonderful in Gillian Armstrong’s 1994 adaptation of Little Women (playing Jo, because of course). Some critics were unsure at the time about her “publicly meek, privately steely” take on an aristocratic wife in Martin Scorsese’s version of The Age of Innocence, but she won a Golden Globe and garnered an Oscar nomination; with each passing year, both that film and her work in it look better and better. Even at the end of the decade, as the lead in the mental illness memoir Girl, Interrupted, Ryder maintains her unique combination of intelligence and sensitivity while Angelina Jolie does her Snake Pit 2.0 act.

Aside from maybe Little Women though, none of these performances have endured the way that Ryder’s turns in Beetlejuice and Heathers have — or have captured viewers’ imaginations the way even her brief role in the heartwarming 1986 teen romance Lucas did. It was as though Hollywood couldn’t figure out to how to use an actual Generation X hero in the era when the “slackers” were ascendant. She could’ve been working with Tarantino or Cameron Crowe. Instead she was stuck fumbling through period pictures like Bram Stoker’s Dracula and The Crucible — or worse, playing a cartoon version of a Ninties twentysomething in the painfully phony Reality Bites (1994).

By the time the 2000s rolled around, the actress was becoming better known for incidents unrelated to her craft. She had a succession of high-profile boyfriends, starting with Johnny Depp (who tattooed “WINONA FOREVER” on his arm and then scratched out the “NA” when they broke up). She also suffered a major public humiliation when she was busted for shoplifting, allegedly under the influence of illegally obtained prescription drugs. That, coupled with the news a few years earlier that she’d dropped out of The Godfather Part III due to “exhaustion,” seemed to kill all the momentum in her career. 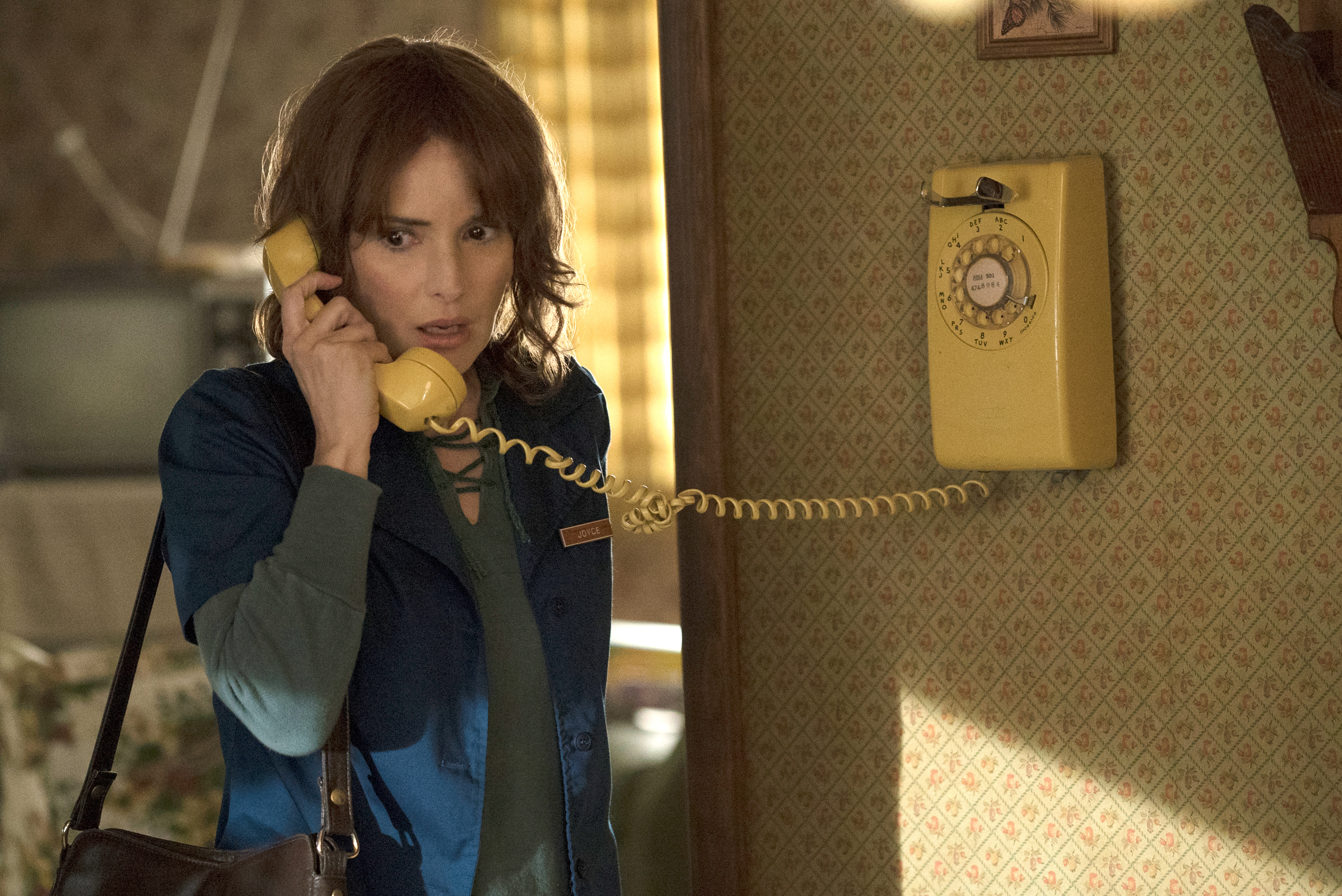 And yet it’s not entirely fair to call Stranger Things a “comeback,” because Ryder never really stopped working. She’s mostly fallen back into the job of character actress, but even there she’s had memorable moments on the margins: see 2010’s Black Swan, where she’s a star dancer on her way out of the spotlight [cough, cough]; and the 2015 HBO miniseries Show Me a Hero, with Ryder cast as a Yonkers politician who turns on a former ally after she they take an unpopular stand. What both of those parts have in common with Stranger Things is a certain “meta” quality. To some extent, these movies are taking advantage of what we already know about Ryder, by casting her as a likable celebrity who’s fallen on hard times.

None have it rougher than Joyce Byers, however, whose son disappears into another dimension, forcing her to deal with the dark mysteries of the universe and the incredulity of the local authorities. Her Stranger Things character is like every Eighties Ryder heroine rolled into one, then aged a few decades. She’s a scrappy underdog like her character in Lucas; a quirky free spirit like Lydia from Beetlejuice; and a smart, determined individualist like Heathers‘ Veronica.

That’s why it’s genuienly a treat to see so much of Ryder in Stranger Things — not because it’s a cleverly kitschy idea to put a once-famous 1980s actress in a show about the 1980s, but because she’s the right former star. In her early years in movies, she represented an entire point-of-view, giving voice to teens who liked literature and loud alt-music, who wanted to make a difference in the world. And in this show, she’s still advocating for the outsiders. She’s become the mom of every Clash-loving adolescent’s dreams. She’s the kind of mother a Winona Ryder character would want to have.

From musical cues to Spielberg movie references, Netflix’s ‘Stranger Things’ resurrects the Eighties. Watch here for an inside look into the hit series.