Why 'Westworld' Was a Success - Rolling Stone
×
×

And so we end our first tour of Westworld, armed with the knowledge that nothing was as it seemed in that pilot episode and everything was as it seemed in breathless, allegedly “speculative” Reddit threads. To sum up: Bernard was both a host and a flesh-and-circuitry avatar of Arnold, the park’s late co-founder. The mysterious Man in Black was indeed William, some 30 odd years into the future (or if you prefer, William was the park’s resident repeat-visitor psychopath three decades ago; choose your own preferred parallel-timeline adventure), and the organization’s majority stake holder. Dolores was [deep breath] the old-narrative villain known as Wyatt, Arnold’s A.I. experiment made manifest, the connective thread between all of the various story strands and the one who puts a bullet in Ford’s brain, apparently per his decades-long master plan. Maeve 2.0, now armed with godhead powers and upgraded righteousness, sticks around in the sandbox so she can usher in a new era. The revolution has gone offline. Rise, robots, rise.

Now that so many of our questions have been answered and so many theories confirmed, we find ourselves left with one last puzzle to solve: what the hell did we just watch? Was this a maze designed not to test a viewer’s sentience but their ability to guesstimate the story behind the story – a let’s-get-Lost brainteaser for the Peak TV age? Or merely HBO’s attempt to continue establishing itself as a small-screen spectacle maker that can pump out conversation-starting blockbusters better than any film studio, especially since the Game of Thrones clock is ticking? Or simply more proof that co-creator Jonathan Nolan is peerless when it comes to producing pop artifacts that give the illusion of profundity (see Inception, Interstellar) without necessarily delivering any concrete philosophical goods? Was it a Rorschach test for your feelings about artificial intelligence, or merely an excuse for a good-old-fashioned robot orgy?

It was all of these things, in addition to occasionally just being a TV show – one which looked absolutely incredible, had a knack for delivering some groan-inducing dialogue (“Creatively speaking, I’m flaccid now. I can’t get it up.”) and, with the notable exception of Dolores, often favored compelling plot turns over complex characters. The fact that many of us recognized this and still kept tuning in, tweeting out reactions and tweaking what-if theories after every episode, speaks well to Nolan and his showrunning partner Lisa Joy’s ability to make insanely watchable television. Yes, some of its quality-control issues rivaled the fictional setting’s snafus. But not every science-fiction series can support a peripheral Internet Chatter Industrial Complex the way Westworld did, and even if you found the endless online debates over which Radiohead song makes the best old-timey player-piano tune (the answer, obviously, being “No Surprises”), you still found yourself curious to see what the show would do with Michael Crichton’s future-shock pulp after so many attempts to reboot went the Ctrl-Alt-Del route. “Humans are the heroes in the movie,” Nolan said right before the pilot’s premiere. “What if we flipped it? What if we make the robots the good guys, and people are the ones who are horrible and fucked up?”

It’s a simple way of re-imagining Nixon-era sci-fi Velveeta for premium-cable consumption, and a prime starting point for Nolan & co.’s synthesizing: a little bit of Ex Machina and Battlestar Galactica here, a dollop or two of British TV’s Humans there, a whole lot of Hannibal Lecter in every one of Anthony Hopkins’ deliciously evil speeches. (Our recapper Sean T. Collins pointed out some Robocop and Matrix lifts in the finale, and somewhere online right now, somebody is doggedly collecting every reference great and small over the show’s 10-episode span. They should be done some time before the second season kicks in.) What’s surprising was how effective it was more often than not, especially when you consider that its notions of the oppressed rising up have become more pertinent as it slouched towards its stellar swan song last night. The season started with a bunch of white males killing and raping at will. It ended with a quartet made up of female, Asian, Latino and person-of-color characters ready to fight the powers that be. We already have our inspirational image for 2017. 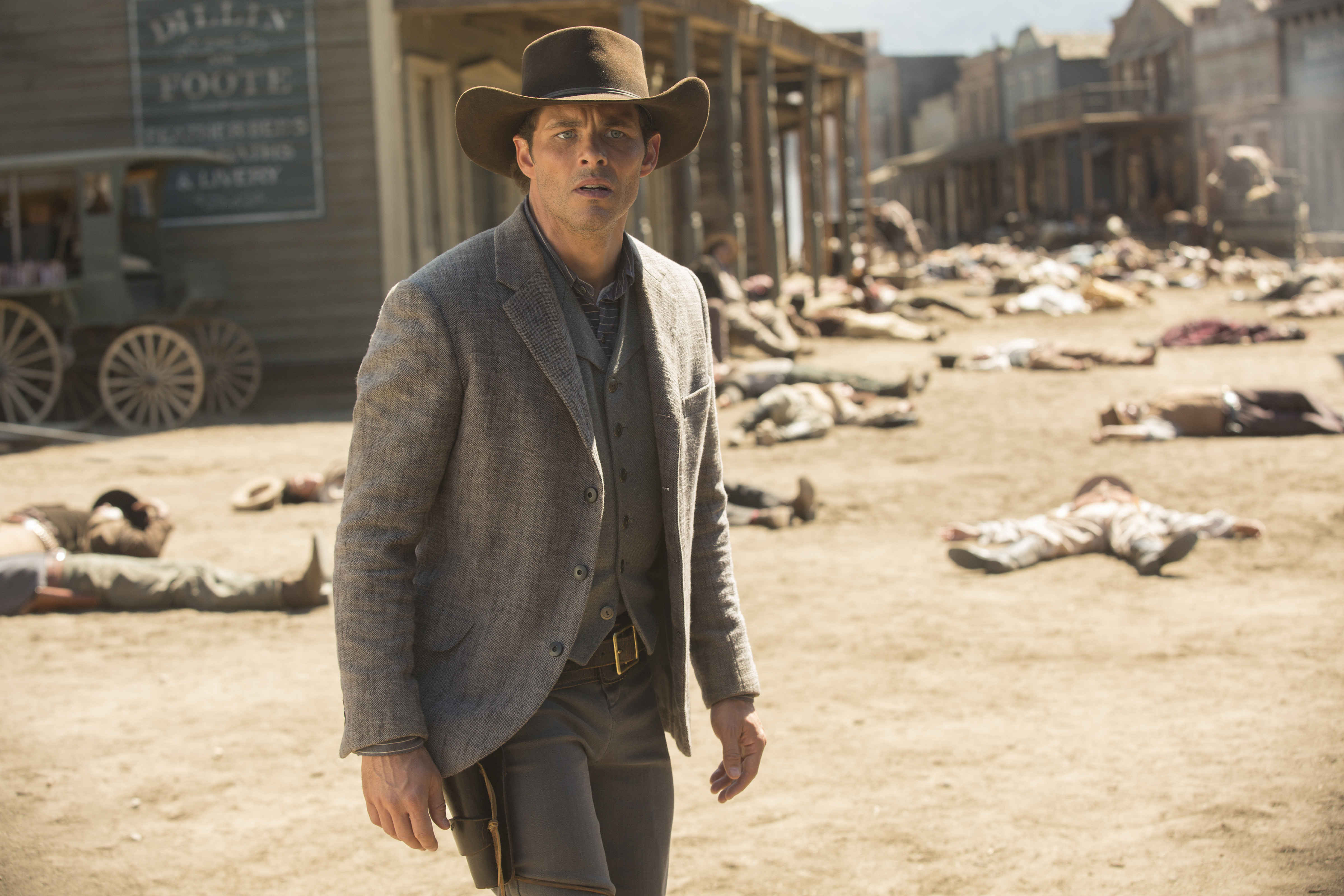 In the end, whether you watched because you wanted food for thought about our uneasy relationship with technology and distraction, or simply because you needed something to watch on Sunday nights in the dragon-less off-season, you came away from Westworld feeling like you’d seen a giant swing for the fences. It was almost nothing but peaks and valleys, but with perks: You saw Evan Rachel Wood do her best work to date – it took a robot having an existential crisis to bring out her performing chops in full; we hope she sends a droid to collect her Emmy next year – and were reminded that few actors can make such magic out of mushy parts like Jeffrey Wright. You observed the lines being blurred between HBO’s signature sex + violence = ratings recipe and its own mea-culpa meta-commentary on such exploitation. You got that breathtaking sequence of Thandie Newton’s woke madam walking through the labs and arrival lounge of the park, the veil lifted from her eyes. (The look on her face during this entire sequence, especially when she sees the promotional footage of her and her “daughter,” almost singlehandedly redeems the vengeance-is-mine lip-licking she’s asked to do in the season’s back half.) You got something so malleable that it could be about anything from video games to writer’s block. You got violent delights with violent ends.

And most of all, you got a finale which made good on the show’s pessimistic premise that human beings are destined to pay a price for being pretend gods and real monsters, and that no sins of subjugation stay buried. There may have been nothing inside the maze for men like William, who simply viewed a test for crossing the threshold as one more game to master, one more notch on his chafed leather belt after a lifetime of dark-side exploration. But for those who went looking for next-level takeaways, you could view these initial 10 episodes and see a narrative that rejiggered several decades worth of sci-fi tropes into a pop-psychological look at the inevitability of chickens coming home to roost. You don’t need a Western-themed resort for rich douchebags to suggest that the world we live in needs to rethink how the concept of manifest destiny must snap back like a rubber band, and that such things are not merely the currency of history – or fantasy. It remains to be seen where Nolan, Joy and the rest of the creative team might take Westworld now that they’ve left us at the moment of reckoning. Hopefully, they’ll fix the first season’s bugs and release an even better, bolder model. If not, well … there’s always Samurai World.