Let’s be real for a second: The real Roseanne reboot had already happened long before this past Tuesday, and it was called Lady Bird. Darlene was now going to Catholic school; Aunt Jackie was playing the mom. But otherwise, Greta Gerwig’s film had all the tropes that made the original Roseanne great: grit, compassion, family fireworks, blue-collar heart, feminist soul, a lovable lunk of a dad and Laurie Metcalf’s sarcastic sneer. In other words, it had everything that’s missing from ABC’s new reboot version. Gerwig made a movie that did for that groundbreaking late-Eighties sitcom what the Coen brothers’ Fargo did for Columbo – a brilliant film that plays as a 90-minute episode of a classic TV show. It makes the new version  look spineless, toothless, soft, just kind of Fake Becky-ish.

The hugely hyped Roseanne revival has turned out to be a ratings blockbuster, scoring the biggest numbers of any comedy broadcast in years – since the 2014 season premiere of The Big Bang Theory. Even the ABC brass was stunned at how big the premiere’s audience turned out to be, 21 years after the show went of the air. Roseanne Barr, once the most abrasively left-wing presence on network TV, has swerved right with a vengeance, pitching the idea that the working-class Connor family would be Trump voters by now … but you know, the really heart-warming kind? It’s the ultimate Trumpian fantasy: an obedient America where everybody shuts up, falls in line and surrenders peacefully to our new lords and masters. Yet the new show tries so hard to be heart-warming, it never finds any heart. It feels like the kind of eager-to-please Eighties smarm that the original Roseanne killed off.

When you consider how massive this working-class sitcom was in the Nineties, it’s weird how it’s had such a quiet afterlife. It never became a rerun giant the way peers like Seinfeld or The Simpsons did. But in its heyday, Roseanne was more than a laugh-tracked comedy – it was a chance for Americans to see their real lives mirrored on the TV screen. Like the episode when the Connor family can’t pay the power bill – in the middle of an scene the lights go out, and you hear Roseanne’s voice in the dark: “Well, middle class was fun.” Or when Mom and Dad confess to the kids that their motorcycle shop failed and the family has gone broke. Darlene pipes up: “Can I have a pony?” Roseanne didn’t pretend sarcasm was a cure for real-world problems, but it was a necessary coping strategy, sometimes even a way to communicate.

Roseanne debuted in the late 1980s, a wretched time for network TV, when nobody watched prime-time sitcoms except little kids, invalids and bored alcoholics. I didn’t love the first episode I saw, but I kept going back because I loved Sara Gilbert as surly teen queen Darlene. Eventually, I fell for the rest of the Connors as well. There was nothing else like it. There was the time that Sandra Bernhard joined the cast as a groovy lesbian, the kind of thing that just wasn’t done in those days. There was the episode where Roseanne and Jackie pick up a punk hitch-hiker – Jenna Elfman! – who gets them into riot-grrrl bands like Bikini Kill and L7. Or the episode where Jackie talks to Becky about birth control – it is difficult, in our blasé times, to describe how shocking it was to see stuff like this on the country’s favorite family show.

Its popularity – its existence – could only have happened because Barr was filling a void in American culture during what we now refer to as the Springsteen Drought of the Nineties. Strange as it seems to recall, there was a 10-year period where His Bruceness was sick and tired of being the Boss. So he fired the E Street Band, left New Jersey and moved to, of all places, L.A. He was so eager to piss off his fans, he even told Rolling Stone in 1992 that being in Jersey made him feel “like Santa Claus at the North Pole,” which went over like Bono burning the Irish flag. At the time, nobody knew Springsteen was just taking a break to find himself as a husband and dad; we had no way of knowing he’d reunite his band and return tougher than ever. All we knew was that he’d abandoned the role of our nation’s blue-collar left-wing working-class hero.

And Roseanne was right there to pick it up – a show about a heartland family with debts no honest man could pay, in an America where lately there ain’t been much work on account of the economy. The show’s run coincided exactly with the Springsteen Drought; it debuted in 1988, right after he dissolved the band, and ended just before he got them back together. (They couldn’t have planned it better. Anyone suspect collusion?) When Bill Clinton won the presidency in 1992, it was mainly because his team figured out how to adapt the Roseanne narrative to a political campaign: It’s the economy, stupid. Clinton said the voter he wanted to reach was Susan Sarandon’s character in Thelma and Louise – “the people who work hard and play by the rules” – but he really meant the Connors.

Its disastrous farewell season squandered all those years of good will, where the family won the lottery, got rich, ceased being the least bit funny or likable. Is it the worst final year any sitcom ever had? I do not happen to know for sure, and I do not plan to find out. (If you think I’m willing to investigate the endgame of Happy Days, when Richie Cunningham joins the Army and the Fonz becomes a high school teacher, you can go sit on it.) But it’s safe to say no show has done more long-term damage to its legacy by running a year too long. Roseanne headed into that last season as an American archetype, but limped out as just another cheesy celebrity ego trip. By the “it was all a dream” finale, the audience was past the point of caring. 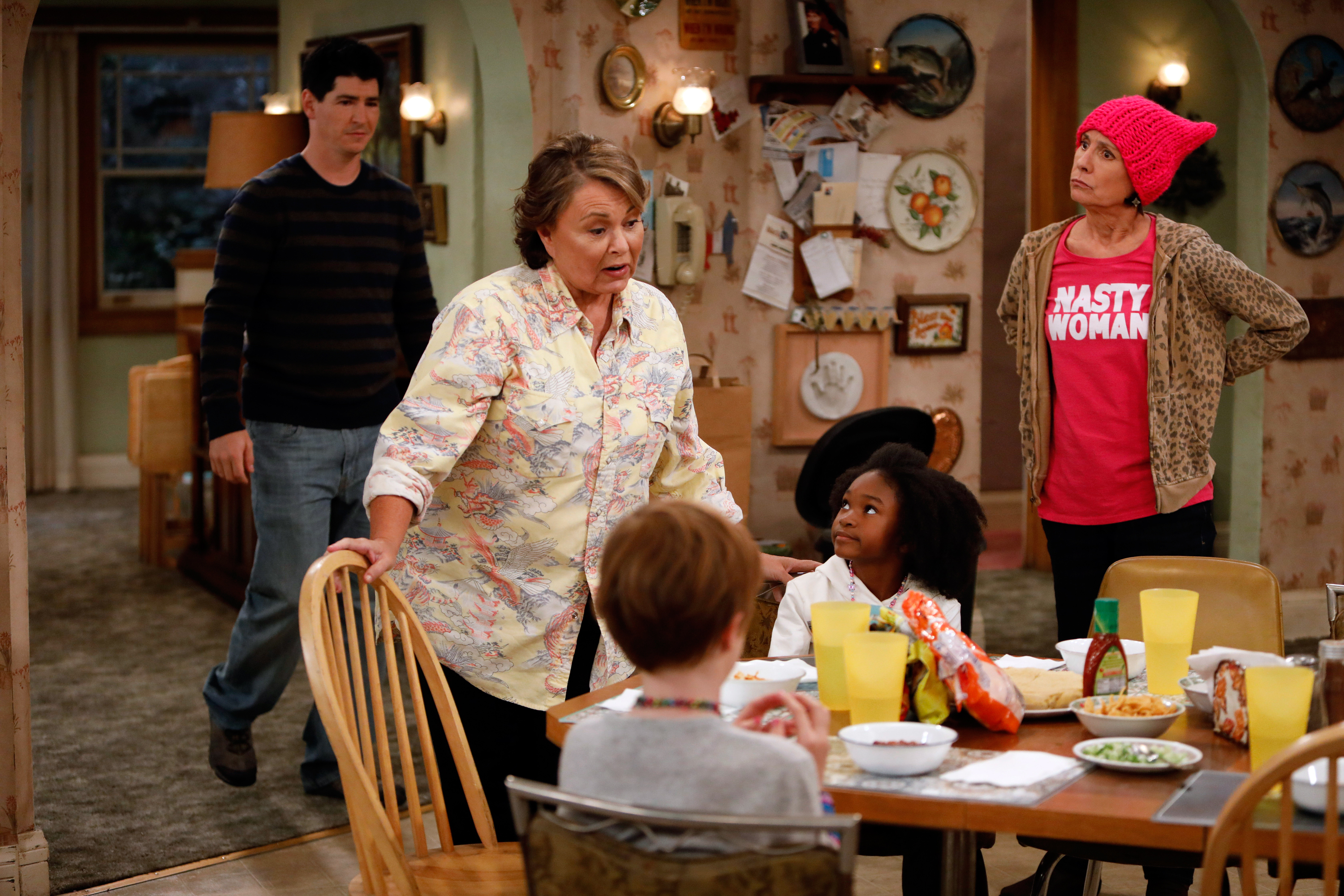 Roseanne 2.0 feels more like a reunion special than the start of anything new. Some of the cast members kept up their acting chops; others didn’t. Barr is really rusty – her trademark timing is off and she frequently fails to notice there are other actors in the room, so she yells punch lines at the furniture. John Goodman and the mighty Laurie Metcalf seem curiously checked out. Surprisingly often, the Connors pause to glance at cue cards in the middle of a line, perhaps a habit that will wear off over the course of a nine-episode season.

Sara Gilbert seems sharp as ever, evoking the days when she reigned as Darlene, everybody’s favorite Connor. (Or at least mine and Bart Simpson’s.) Gilbert is one of television’s all-time great sassy one-liner bazookas, but bizarrely, she isn’t given any sassy one-liners here; all she gets to do is bemoan her sad-sack life in her parents’ house. The actor seems to spend her scenes sitting around waiting for Darlene to show up, and she’s not the only one. It’s like if they did a remake of The Wire where the new guy playing Proposition Joe just kept complaining about his low-sodium diet.

The writing seems like it’s done by folks who can’t tell the difference between vintage Roseanne and a Pluggers comic strip. When Roseanne and Dan lament how Becky never takes their advice, she says, “Remember we told her not to get that Marky Mark and the Funky Bunch tattoo” – which I mention because it was the one moment that made me chuckle, or at least give an audibly chuckle-like exhalation of carbon dioxide. It’s a cheap joke that has nothing to do with these characters, kind of like the time Roseanne proved she was hip by referencing “Snoopy Dogg Dogg.” But after so much sanctimony, a cheap joke comes as a relief.

It flaunts itself as a throwback – it even begins with the old-school announcement, “Roseanne was taped in front of a live studio audience.” But it sounds like they just dubbed the audience sound effects from a rerun of Married…With Children, heavy on the “whooooa” and “eeeew” and “aaaaw.” Jackie wears a “Nasty Woman” t-shirt and a pussy hat, for no reason except so she and Roseanne can yell “deplorable” and “snowflake” at each other. (Jackie brings Russian dressing over for dinner, the closest she’s allowed to come to landing a punch.) It ends up feeling phony – like its creator wanted to show a family getting along despite political differences, but could only do it by turning Jackie into a silly cartoon.

Back in the day, there was an episode where Roseanne and Dan speculated about their kids’ sexualities. Roseanne said, “I don’t care if the kids are gay – all I want is for them to be happy and to move out of the house, and I’m flexible on the happy part.” I’m probably getting a couple words wrong – I’m quoting from memory – and believe it or not, there was a time when this was a sentiment so surprising to hear on TV that you might remember it for the rest of your life. If that version of Roseanne meant anything to you, there’s little chance you’d mistake the new version for the real thing. This was once a show that changed the way America saw itself and made the country a tangibly if ever-so-slightly better place. The new Roseanne is an elegiac show wondering what ever happened to that world.