'The Walking Dead' Season 8: Everything You Need to Know - Rolling Stone
×

Last October, The Walking Dead‘s seventh season debuted with one of the most-watched episodes of the entire series. Long-time fans – and even a handful of haters – tuned in to see the resolution to the “Who did Negan bludgeon?” cliffhanger, in one of those rare 21st century TV moments shared by over 15 million people at once.

After the premiere, however, the show’s usually noisy buzz quieted down to something like a faint hum – which grew even softer as the winter’s batch of episodes gave way to spring’s bounty. That’s too bad: Yes, there was plenty to gripe about with the previous season, like the overlong episodes, pointless detours and frustratingly abrupt deaths. But last year also brought exciting new characters (hello, tiger-owning badass King Ezekiel!), and some refreshingly accelerated plotting.

In other words: There’s plenty to look forward to as The Walking Dead‘s Season Eight gets set to premiere, with a tight one-hour episode called “Mercy,” premiering on October 22nd. So for those of you who might want to jump back into the dangerous, zombie-strewn streets of AMC’s signature hit, here’s what you need to know about what may be ahead in the next 16 episodes.

'The Walking Dead': 5 Things We Learned From the Season 7 Finale

Get ready for what could be a grueling “all out war.”
The show has never been a beat-for-beat adaptation of writer Robert Kirkman’s comic book, but it has followed the original story-arcs fairly closely. Right now, we’re at the beginning of the plot-line that the comics dubbed “All Out War,” where Rick Grimes and the various residents of the Alexandria Safe-Zone/Kingdom/Hilltop Colony join forces to resist the tyranny of Negan and his Saviors. In the comics, this fight lasts for a long while, with twists and turns aplenty.

The TV TWD‘s current head writer Scott M. Gimple has occasionally zoomed through Kirkman’s plots, and sometimes slowed things waaaaay down to spend more time with the characters, charting their individual journeys through the post-apocalypse. Without giving too much away, the Season Eight premiere – which has already been provided to critics – does a little bit of both. “Mercy” picks up after the explosive skirmish and retrenchment that ended last year’s finale, and features still more stand-offs and shoot-outs. But there’s also a little foreshadowing of where all of these battles royale smay be headed.

And given the way The Walking Dead structures its seasons, “All Out War” may stretch into the spring of 2018 … or it could be over by Christmas. Either possibility seems likely.

The pieces left on the board – and where they’re positioned.
You’ll be forgiven if you can’t remember everything that happened at the end of Season Seven, which introduced a slew of new people before wrapping things up with a finale chock full of fresh corpses. Last year, Rick and the Alexandrians traveled far and wide, making some new alliances (and enemies). The key names and places to recall are:

–The Hilltop, which Maggie and Paul (a.k.a. “Jesus”) effectively took over from its cowardly leader Gregory – who, in retaliation, has been feeding intel to the Saviors. Not good, Greg.

–The Kingdom, whose cautious, benevolent King Ezekiel gave the burned-out Carol and Morgan a place to rest and regroup. Initially determined to remain safely neutral, the man with the tiger has belatedly agreed to join Rick’s cause, with his Alexandrian guests as his chief strategists/generals.

–The Oceanside, a secluded, matriarchal society that Rick raided to seize weapons, which he then gave to mysterious warrior cult the Scavengers – who ultimately revealed that they were secretly allied with Negan.

–The Sanctuary, the home of the Saviors, which has been recently re-fortified thanks to the know-how of weaselly ex-Alexandrian Eugene. Our heroes have a mole inside Negan’s organization in the form of Dwight, a top Savior lieutenant who’s been biding his time and waiting to spring a coup.

And of course, let’s not forget that there are still, y’know, rampaging flesh-eating zombies wandering the roads and woods near all these places. Last season got away a bit from the series’ horror foundations, but judging by what happens in next week’s season premiere, the title of this show hasn’t been entirely forgotten by the folks who make it. 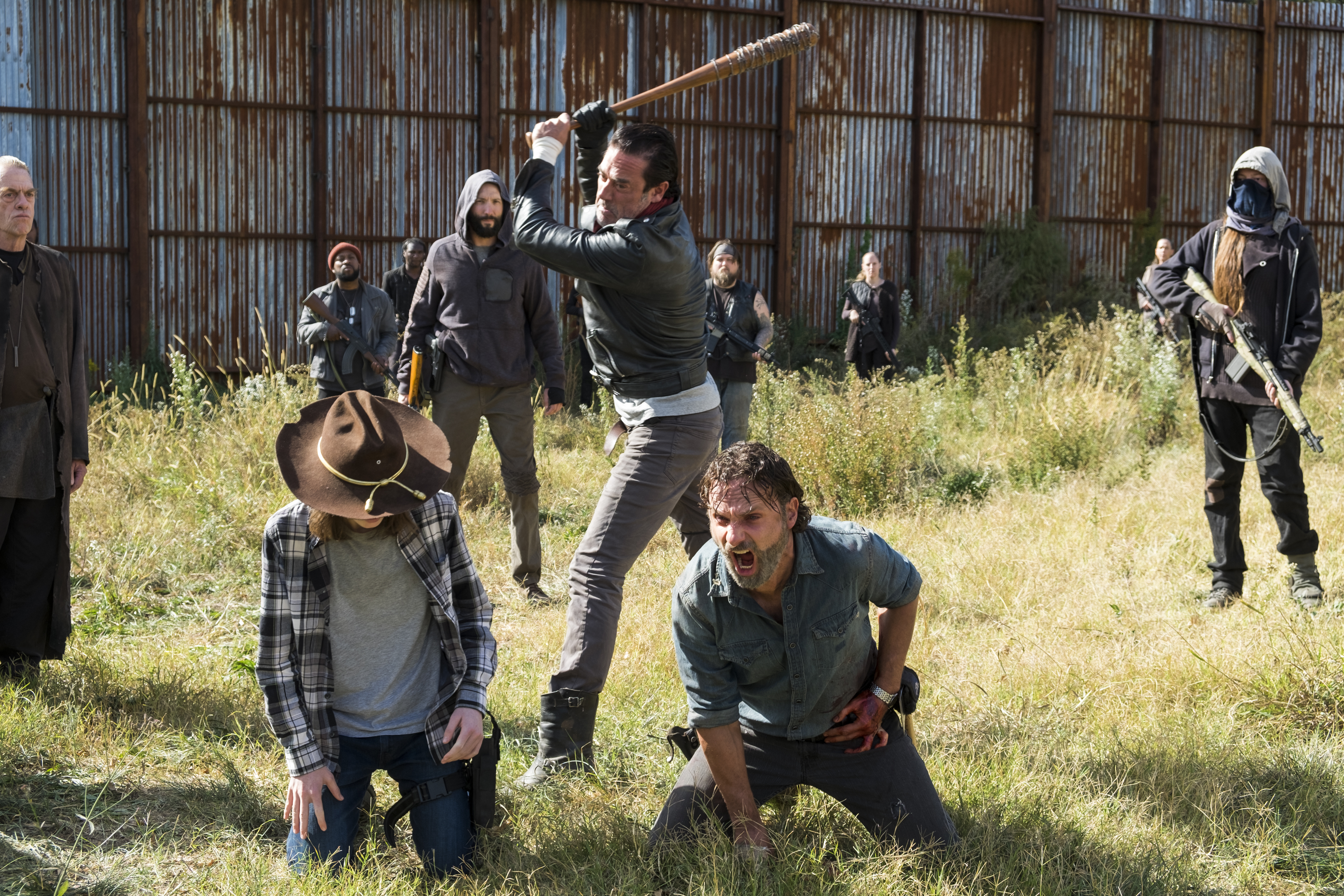 3. Negan may be weaker than he appears …
While he’s easily the most powerful, colorful and controversial villain that The Walking Dead has ever had (sorry, Governor), Negan’s strength primarily lies in his ability to inspire fear, not loyalty. As long as the people in his orbit are convinced that he’s unbeatable, they’ll keep accepting the terms of his leadership: Work with him and reap the rewards; work against him and get clubbed by a spiked baseball bat. In the past, that hasn’t really been a tough choice.

In last season’s finale, the big boss man thought he’d reestablished his superiority by surprising the Alexandrians with the Scavengers’ betrayal. But then Sasha weaponized herself by downing a suicide pill and turning undead. Minutes later, King Ezekiel rode to the rescue with his tiger, followed by Maggie with the Hilltoppers – collectively disorienting an enemy still recovering from Sasha’s shock attack.

Given all that, cracks are starting to appear in Negan’s smug facade. Rick’s primary demand for a truce between tribes is that the Saviors’ sacrifice their leader, which means it may not be too long before those henchmen realize they’re better off without him.

… But “victory” for Rick could be costly, and elusive.
You may remember that the Season Eight trailer included a scene of our fearless leader that might be a flash-forward or a dream sequence – or possibly a combination of both. No matter what the new season’s gauzy, greybeard-Rick scenes turn out to be, these little glimpses suggest what the future might look like for our heroes, after the war is done. If nothing else, they’re a reminder that every battle Rick has fought over the course of seven seasons has cost him friends and family. Even when he’s vanquished an enemy and seemingly settled into a new home, the moments of peace and stability have been short-lived.

Last year began with Negan brutally murdering Glenn and Abraham, and it ended with Sasha going full zombie; in between, the losses to Rick’s community were relatively light. Plus, in the process of gearing up for war he’s found new societies and resources. It’s hard to imagine that all of those assets and alliances will remain undamaged over the course of the next 16 episodes … or even the next eight.

A crossover with Fear the Walking Dead is in the works.
According to hints dropped by Kirkman himself at New York Comic-Con, a character on either TWD or Fear the Walking Dead will appear on the spin-off, sometime within the next year. (In 2018, most likely.) No one involved with either production will confirm in which direction the flow of Dead-folk will go, but fans are already speculating that it’d make the most sense for a much-missed, now-dead character from the original show to get a new backstory that allows him or her to be in the much-lower-rated prequel. If so, the next question to ask is: Who could’ve been way out west when the zombie plague began? Whither T-Dog?

The show is due for a comeback season.
The Walking Dead‘s viewership increased steadily between the first and fifth season, before a slight tumble in year six and a pretty pronounced drop in the most recent run. But then this show has gone through ebbs and flows before. Given the talent and past performance of the cast and crew, there’s no reason why we couldn’t be due for another all-time classic run à la Season Four.

If anything, the recent drop in critical and audience attention could be just what Dead has needed to jolt it back to life. Gimple and company may have something to prove now. Making the new season premiere available unusually early for critics is a sign of some renewed confidence. And the episode’s quite good, too, wasting no time in setting up what’s might be several weeks or even months of epic battles.

Is fall TV about to see a Rickaissance?