'The Punisher': Everything You Need to Know About Marvel's Vigilante Antihero - Rolling Stone
×

Black clothes. White skull. Smoking guns. These are the gloriously simple ingredients behind the Punisher, the no-holds-barred antihero who’ll soon be starring in one of the fall’s most anticipated series. As played by The Walking Dead‘s Jon Bernthal during the second season of Netflix’s Daredevil, the gun-toting vigilante stole every scene he was in, making the network’s relentless campaign of teases and trailers damn near irresistible. But like every major superhero, he’s taken a long strange trip from his comic-book origins to his modern-day multimedia superstardom. Below, you’ll find our war journal of everything you need to know about the character’s many incarnations. Be warned: The safety is off.

The Punisher is the sixth round in the Marvel/Netflix chamber
Coming after Daredevil. Jessica Jones. Luke Cage. Iron Fist and The Defenders, The Punisher is the sixth entry in Netflix’s roster of Marvel shows, all of which are part of the larger Marvel Cinematic Universe inhabited by Iron Man, Thor, et al. But unlike his fellow Netflix/New York City crimefighters, the vigilante known as Frank Castle sat out the big Defenders team-up against the sinister supernatural organization known as the Hand. His concerns are far more flesh and blood than those of his counterparts.

He’s the epitome of the street-level “superhero”
In contrast with his Netflix comrades, Castle has no superpowers whatsoever. He’s just a well-trained veteran whose family got gunned down during a drug deal gone bad, sending him on a bloody quest for retribution by any means necessary. When he was introduced in Daredevil Season Two, his very literal war on crime made him the terror of NYC’s underworld and its ex-military puppetmasters, including his own commander Col. Ray “The Blacksmith” Schoonover (the great Clancy Brown). Along the way, he challenged Matt Murdock’s alter-ego to defend the morality of his own less lethal but still violent methods. The character has always served a similar role in the comics, acting as a dark reflection of the more colorful and acceptable actions of Daredevil, Spider-Man and so on.

Jon Bernthal is the Punisher
Frank Castle is no stranger to the screen, having appeared in no less than three separate films: The cult-classic straight-to-video 1989 movie starring Dolph Lundgren; a high-profile relaunch in 2004 with Thomas Jane; and a 2008 reboot, Punisher: War Zone, helmed by outspoken director Lexi Alexander and featuring Ray Stevenson in the title role.

While each performance has its partisans, it’s hard to think of an actor more perfectly suited to the Punisher’s grim task than Jon Bernthal. Previously best known as Shane, the ill-fated best-frenemy from the early seasons of The Walking Dead, the actor bought equal parts sociopathy and soul to his extended cameo during Daredevil Season Two; his bullet-headed physicality could sell the character’s pain and rage just by showing up. He owned his scenes, from his prison-hallway brawl against gangland assassins to sparring with legal investigator Karen Page (Deborah Ann Woll, a co-star of the new show). His involvement in the stand-alone series goes a long way toward winning over skeptics that a character this black-and-white could sustain an entire show on his own. 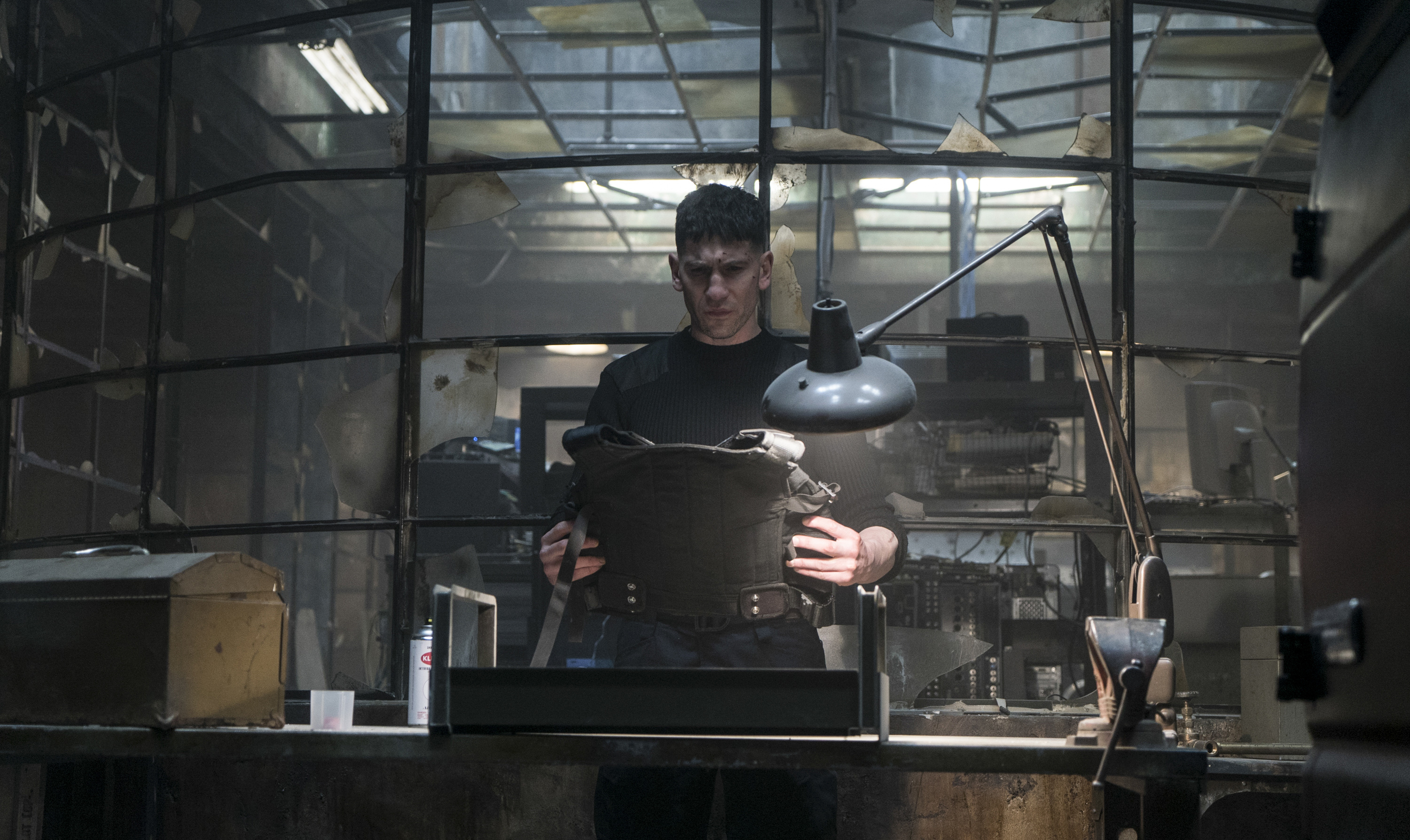 … And Steve Lightfoot is the showrunner
The creator of the Punisher’s small-screen showcase has a history with charismatic mass murderers. Steve Lightfoot was an executive producer and frequent writer on Bryan Fuller’s Hannibal, which brought the iconic cannibal maniac of Thomas Harris’s novels to bloody, bizarre revisionist life on NBC. He’s responsible for many of Dr. Lecter’s greatest moments on the series – can he work the same macabre magic on Frank Castle? The answer seems worth the 13-episode investment.

The Punisher was never intended to be a leading man
In fact, he wasn’t even an antihero, let alone a hero, when he was first introduced into the Marvel Comics universe in 1974’s Amazing Spider-Man #129. The character was co-created by writer Gerry Conway; his partners in crime included Marvel art director John Romita Sr., who also had a hand in the design of Wolverine, Luke Cage, Bullseye and the Kingpin; series artist Ross Andru; and Stan Lee himself, who suggested his moniker.

The Punisher spent his first appearance in comics trying to kill Spider-Man, who was then under suspicion of killing Norman Osborn, the civilian identity of supervillain the Green Goblin. Despite his murderous intent and his conflicted morality, this supporting character became a fan favorite. He wound up at the crest of a wave of shades-of-gray characters that also included Wolverine and Ghost Rider, and which would both peak and crest in the 1990s. By that point, the vigilante sustained no less than five different series: The Punisher, The Punisher War Journal, The Punisher War Zone, The Punisher Magazine and The Punisher Armory, as well as countless crossovers and cameos. 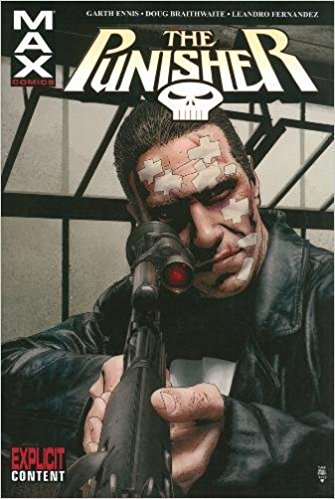 He’s had some classic comic-book runs
Over a decade after his first appearance, the Punisher got his first shot at the solo spotlight, in a miniseries from writer Steven Grant and Secret Wars artist Mike Zeck. An ongoing series from writer Mike Baron and artist Klaus Janson soon followed.

The writers who have arguably the biggest stamp on the character, however, are The Dark Knight Returns/Sin City author Frank Miller and Preacher co-creator Garth Ennis. The former’s wildly influential Daredevil comics from the early 1980s included the Punisher alongside other future mainstays of the character’s mythos (Elektra, Stick, the Hand), many of who serve as the linchpins for much of the Marvel/Netflix saga. Starting in 2000, Ennis and an army of artistic collaborators – most notably his Preacher collaborator Steve Dillon and shadowy cover artist Tim Bradstreet – utilized the relative free rein of Marvel’s mature-readers imprints Marvel Knights and MAX to usher the character into the new millennium. He soon became more brutal and bloody than ever, and though Ennis’s run had a firm beginning and end — starting in the killing fields of Vietnam and ending with Castle’s death decades later — its influence lives on.

Batman has Alfred; The Punisher has Micro
He’s the definition of a loner, but even Castle couldn’t go it alone forever. In 1987, writer Mike Baron and artist Klaus Janson introduced David “Microchip” Lieberman, a computer expert with a grudge against the Kingpin and other organized crime figures. Better known as Micro, he became the brains of the Punisher’s operation, providing him with everything from high-tech gadgets to hacked intel. Eventually the two had a falling out over Frank’s increasingly brutal methods, leading to a free-for-all shootout that ended with Lieberman’s apparent death. Subsequent appearances of the character, including in Ennis’s celebrated MAX run, situate the character somewhere between ally and antagonist.

On the show, Micro will be played by Girls standout Ebon Moss-Bachrach. He’s been reimagined as a family man and rogue NSA agent – equal parts Frank Castle-lite, Edward Snowden and Chelsea Manning.

Punisher comics have gotten pretty weird over the years
We know what you’re thinking: Gun-toting combat veteran goes kill-crazy against criminals after they murder his family – this concept is pure meat-and-potatoes street-level stuff, right? But we’re talking about superhero comics, folks. After a few decades of near-continuous publication, pretty much every character gets pushed out of his or her comfort zone, and our the Punisher is no exception.

Among his strangest adventures? The Punisher: Purgatory (1998-99), in which the then-dead vigilante was revived to serve as an angelic demon-slayer. The similarly supernatural FrankenCastle arrived a decade later; this knowingly screwball storyline saw the antihero, who had been killed once again, brought back as a Frankenstein-like monster, fighting alongside horror-tinged characters like Morbius the Living Vampire and Man-Thing. (In a word: No.) In 2012, the character got a sci-fi makeover in Space: Punisher – which featured, yes, the Punisher in space, punishing aliens and whatnot.

Years before his character-defining run on the character, Garth Ennis wrote the one-shot Punisher Kills the Marvel Universe, which pretty much does what it says on the tin. The 1995 special chronicles a short, bloody alternate timeline in which Castle’s family gets killed in the crossfire of an X-Men/Avengers battle, leading him to slaughter every single superhero and supervillain in the company’s catalog. He eventually turns the gun on himself. But for sheer WTF-itude, nothing beats 1994’s Archie Meets the Punisher, a crossover between Marvel’s bloodiest antihero and Betty, Veronica, Jughead and the rest of the Riverdale gang. Sure, it’s just a footnote in Punisherology, but crazy stunts like this are exactly what brought Archie back to pop-culture prominence over two decades later. A crossover between the Netflix Punisher show and Riverdale doesn’t sound completely out of the question now, does it?

So when does this thing debut, anyway?
Simply put: No one knows. Netflix has kept the release date of its Punisher series top secret, repeatedly teasing viewers with it in its ads and trailers with a redacted release date. “Fall 2017” is a broad target to aim for. When it does drop, however, expect the punishment to exceed the crime. That’s the Frank Castle way.