With the heavily hyped Simpsons–Family Guy crossover episode looming, it’s easy to forget about the other animated mash-up planned for Springfield: On November 9th, the crew from the recently re-canceled Futurama will join Homer and company for a special Simpsons episode, “Simpsorama,” which boasts the tagline “A show out of ideas teams up with a show out of episodes.” Entertainment Weekly is helping to satisfy fan curiosity with the teaser image below, which shows a befuddled Homer encountering an enraged Bender – the latter unleashing an array of gadgets (a saw, flamethrowers, a boxing glove) from his robotic compartments.

“That was a really tough one to negotiate, because I had to talk to myself,” Matt Groening, creator of both series, jokingly told Entertainment Weekly, while executive producer Al Jean emphasized the natural compatibility of the two shows. “They were going off the air, so I thought people would really love it if we had one more chance to see those characters,” Jean said. “We do a joke, actually, about how similar Bender and Homer look. Like, they just erased Homer’s hair.”

“Simpsorama” will focus on a complicated, sci-fi plotline in which Bender travels back in time in order to kill Bart and prevent a worldwide catastrophe (which originates from radioactive waste, Milhouse’s rabbit’s foot and “Bart blowing his nose on a sandwich”). The episode, naturally, will feature a tweaked opening credits sequence, reportedly including an easter egg with a Futurama code that, when solved, says “Congratulations! You’re a nerd.” 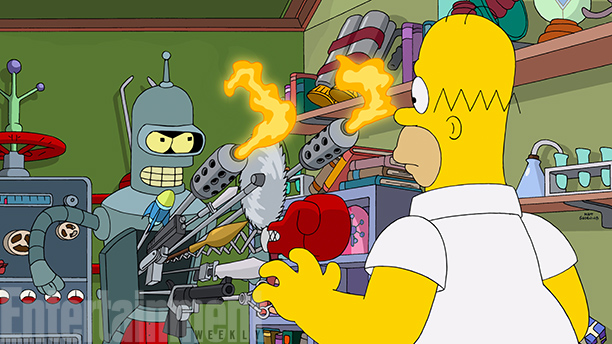 The Simpsons-Family Guy crossover episode will air on September 28th. Fans at this summer’s Comic-Con were treated to an exclusive five-minute clip, which finds the Griffins stranded in Springfield, where Peter tells his family to avoid drinking the water: “Everybody around here looks like they have hepatitis.” The episode’s other highlights include Bart introducing Stewie to his classic prank-call hobby and Peter and Homer bonding over donuts and feuding over the supremacy of their favorite beers.