It’s been 12 hours since Roman Reigns stood down Paul Heyman in front of a hostile Des Moines, Iowa crowd for WWE Raw. It was a typical Reigns moment: Despite demonstrating more confidence every week, the former Georgia Tech defensive tackle and current challenger-in-waiting for Brock Lesnar’s World Heavyweight Championship at WrestleMania on March 29 was besieged by hecklers shouting Daniel Bryan’s name. There was even a pair of jokesters making spastic gestures in the background behind him. But this time, Reigns hit back, pointing toward the live audience and calling out “people like these guys, right here” who tell him he not only can’t beat Brock, but that he isn’t worthy of representing the WWE as its champion. Without missing a beat, he remained on-message and continued addressing his prey.

In the ring, that’s the kind of focus Reigns needs to prevail over both Lesnar and haters alike. But in reality, things are pretty damn good for the 29-year-old member of wrestling’s storied Anoa’i clan – his given name is Leati Joseph, or Joe, Anoa’i – which consists of former and current WWE greats the Rock, Rikishi and the Usos, as well as dad Sika of the Wild Samoans. Despite that famed lineage, Reigns is on the cusp of creating an individual legacy, no matter what those short on patience (and long on leering eyes) have to say about it.

As he recovers from Raw – and prepares for SmackDown and the sundry challenges that lay ahead – Reigns spoke with Rolling Stone about that doggedness, his developmental days, shaking Daniel Bryan’s shadow and how people better believe he and Brock are going to tear the house down 12 days from now.

What’s your biggest goal at WrestleMania besides winning the belt?
I just want to go out there and do my thing, and a lot of that is winning the WWE Championship. I can’t stress enough how that title is everything for us. But for me, I would like to wake up and know, “Yeah, that was a five-star, you-can’t-touch-that match.” I’d like to be able to walk to the back thinking, “Can’t one of y’all do that.” If there’s one thing I’ve shown, I’m not scared of physicality. I’m not scared to take some of my own blood. I play hurt, I play injured. I want people to take from that match that it was one of the most physical they’ve ever seen. That’s something we’re gonna be able to leave behind. When I said last night I was willing to be carried out, I wasn’t joking.

You and Brock have had these kind of separate narratives: You versus critics and he versus skeptics who think he’s leaving for UFC. Has that actually worked to your advantage?
I think we have the advantage because nobody knows what to expect. We have the possibility to do anything. Think of the athlete that he is and the athlete that I am. We legitimately can do anything in that ring. People all the time try to criticize move sets and things like that, but a couple weeks ago, I jumped clean over that top rope. I dived as if I was Rey Mysterio or something. People have never seen me do that, but that don’t mean I can’t. I can do anything I want in that ring. It really comes down to when the time is right, and only when the time is right. Once the bell rings and the punches start flying, I think people are really going to appreciate what’s going on.

It’s almost as if you’re saving the best for the Beast.
Absolutely. I firmly believe that if you’re not getting better, then what are you doing? I’m just trying to progress every single week. I hope people can see my growth. I love being able to learn on the fly. 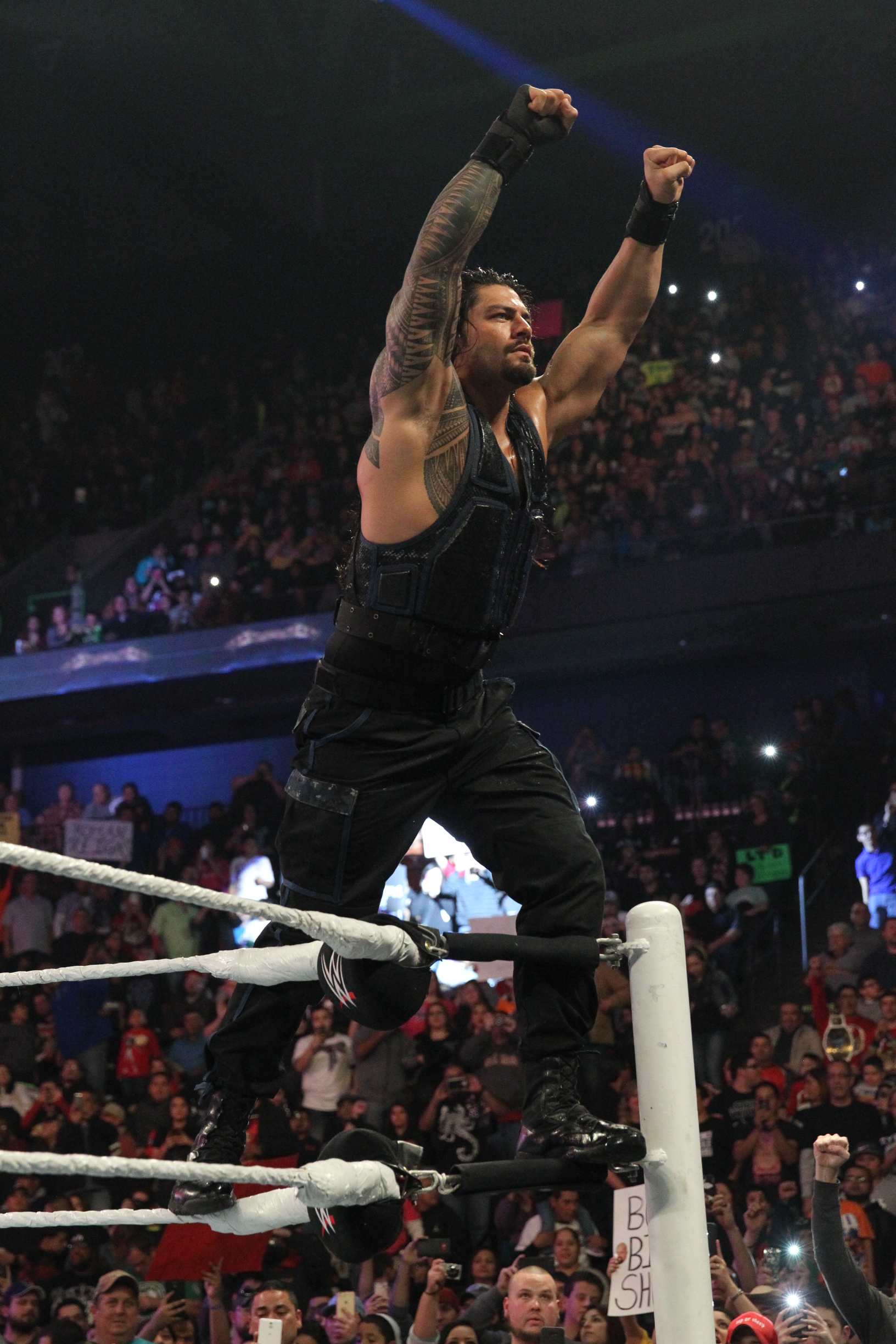 It seems like you’re definitely learning from Paul Heyman. Does he inspire you to up your game?
Yeah, but I’ve gotta say that about everybody. I’m always trying to lift the bar, because if I’m getting better, the whole product’s getting better. It’s all about competition in my eyes. Nobody wants to be in the middle of the ladder, so if we continue to push each other, have that competitor’s spirit in the locker room, it’s just going to be better for everybody.

You shot back at the crowd last night. Is that something you’re comfortable doing or have you been instructed to do that?
That’s just an instinct thing. That’s not something you learn in a warehouse or people can tell you. If you’re a Daniel Bryan fan, I’m all for that. The more people Daniel Bryan will bring into arenas, the better. The more people I bring in, the better. But when I’m talkin’, shut the hell up and let me talk.

You also had the “I Can. I Will.” shirt last night. Is this new wrinkle in your character more of a natural fit than the silent mercenary?
Yeah, it’s my life right now. That’s what I’m dealing with. It feels different, because it’s different than anything I’ve ever done. Growing up, I’ve had plenty of obstacles, but to be honest, I didn’t always have doubters. I was a standout athlete, so when that happens, you don’t have too many people telling you “You can’t do this,” and “You can’t do that.” I’ve always been a bit of a people person and a hard worker. People saw that, people respected it. But the world we live in, the fans’ opinions are so strong now, so for me, these are things I’m dealing with that I haven’t always dealt with in my life. So for me, it’s refreshing, and I enjoy it. Anything that’s gonna keep you on your toes as a man and a performer is great.

How do these obstacles compare to when you pursued, but ultimately didn’t attain, an NFL career?
That was the hardest point in my life. That was what made me what I am today, the foundation that I stand on. What I’m dealing with today can be difficult. It can be wearing, but at the end of the day, it’s a performance, it’s entertainment. So no matter what the crowd’s doing, if I have the ability to stand up, lace my boots up, go out there and run around, then I’m extremely blessed. That’s what’s cool. It’s not just, “It’s going to be like this. Go out there and do it.” You really have no clue what’s gonna happen. That’s a feeling I’m willing to walk into for as long as I’m physically able.

Do people underestimate how, even if you didn’t travel the indie circuit, your football life prepared you for wrestling life?
Absolutely. I’m a firm believer in everyone has their own path. If we were all Seth Rollins, then there wouldn’t be anything cool about that. It’s neat that everybody has their own story. For me, I didn’t have an indie background, but at the same time, there’s a lot of things I dealt with just even in developmental. A lot of guys are like this and don’t get enough credit for it. It’s rigorous. You bust your ass in that warehouse. I was hurt, banged up, bruised, nicked. I crushed the brachial nerve that runs down your neck, I’ve lost all strength in my right side, had atrophy, but I still wrestled. I think I missed one show, like, the day it happened. People don’t realize there’s way more than what you know. You can Wikipedia me, but I guarantee you there’s a whole lot more than what you’re reading, and that goes for every superstar. Everyone’s been through hell to get where they are, and I’m not gonna let anybody talk down on what I’ve done just cause I didn’t do what Daniel Bryan or your other favorite wrestlers did. Don’t mean I didn’t earn my spot.

How does that fraternity of wrestlers differ from the fraternity of football players?
It’s a bit different. I noticed that really early on. And to be honest, I feel a lot closer to my locker room now. When I was at [Georgia] Tech, our locker room was 50 yards long, and it had 130 lockers in it. And a lot of those guys are walk-ons you don’t know that well, and it’s very position-oriented. I hung out with defensive linemen. I went to meetings with defensive linemen. I was eating in our cafeteria with them. Now, it’s a lot smaller locker room, 30-to-40 superstars max. Live events are even smaller than that. And the traveling schedule; that we get to go all over the world together, tour together, ride buses all through the U.K. together. I think the bonding on a personal level is a lot higher than an NFL team or a football locker room could ever have.

And are we starting to see more of Joe Anoa’i in Roman Reigns?
Yeah, I think slowly. We’re not there yet. Just the way I talked to Paul last night, I think you could definitely see a clear difference between the way I spoke with Paul and then when I turned my attention to Brock. Those are things that I guess Joe would do. I’m a very situational person, but I enjoy different types of people, hanging out with different types of people, so I think in that regard, socially, I’m very diverse. And I’d like for people to see that within Roman: to be able to handle any type of situation, any type of backstage segment. In real life, I’m able to handle anything, and I’d like to be able to do the same on-camera.

Lastly, if Joe were pursuing work with his Management degree from Georgia Tech today, what would Joe be doing?
[Laughs] He’d be managing Brock Lesnar.