It’s here! The last thing in the galaxy any sentient being would wish for: Another televised movie award show. The Hollywood Film Awards made its broadcast debut on CBS last and surpassed all other TV award shows — in terms of self-congratulation, senselessless and stupefying monotony.

Warning: This show may cause suicidal thoughts. OK, the line came from a medicine pitch during a commercial break, but it’s apt. No matter. What matters is that the HFA is first out of the gate in the race toward Oscar night on Feb. 22nd, beating the People’s Choice awards, the Golden Globe Awards, the Screen Actors Guild awards, the Critics’ Choice Awards, the British Film Academy awards, and the Film Independent Spirit awards. That must count for something.

The Best and Worst Movies of 2014 So Far

At least, it does to Carlos de Abreu, a former Portuguese fighter pilot with a true pirate’s instinct for targeting a fast buck. Śince 1997, de Abreu and his unidentified selection committee have been doling out wonky prizes in the black hole of obscurity that you enter when there are no cameras around. But this year de Abreu persuaded CBS and Dick Clark Productions to join him in an admittedly clever scam. The theory being that the Hollywood Foreign Press, who pass out the Golden Dildos — er, Globes — have been making a fortune and winning mega-high TV ratings by convincing A-list movie stars to show up every year to accept awards from a membership few have ever heard of. The HFA pours on the booze, even if their greed and near total disinterest in film is soberingly transparent. The stars bring in the viewers and get visibility for their films. The viewers get to watch what happens when big names party near an open bar, leaving the open possibility of slurred speeches and public humiliation. Winners droned on without the mercy of “get-off” music. It’s award show reality TV.

By being early, they give the winners more time to influence Oscar voters. TV host Queen Latifah bragged about how many HFA winners went on to win Oscars. Sure they did. The HFA throw so many prizes  at talent that they’re bound to hit a few champs. This year Benedict Cumberbatch (The Imitation Game), Julianne Moore (Still Alice), Robert Duvall (The Judge) and Keira Knightley (The Imitation Game) won acting  prizes. And just to hedge bets, “Breakthrough Awards” were given to Eddie Redmayne (The Theory of Everything), Shailene Woodley (The Fault in Our Stars), and Jack O’Connell (Unbroken). But what about Steve Carell, Channing Tatum and Mark Ruffalo, who won critical raves for Foxcatcher? The HFA threw a bone in the form of  a “Best Ensemble” award. And what about Michael Keaton, with great Oscar odds for Birdman? He picked up a “Career Achievement” prize. Everyone’s a winner here. If HFA members could have found a way to honor Kim Kardashian’s ass, you know they would have.

The show is a complete joke. Faces in the crowd caught on camera can barely hide their contempt (I mean you, Ben Affleck). Kudos to Chris Rock, a Best Comedy winner for Top Five, for laughing out loud at the absurdity. “Do you feel the excitement in the room?” he asked a room that looked comatose? “I can’t believe this day has finally come!” Others fueled their embarrassment with booze — Johnny Depp wrestling with a stage mic and the English language, J-Lo calling the Best Animation winner, “How to Drain Your Dragon,” Jack O’Connell dubbing his Unbroken director Angelina Jolie “your ladyship.” These rep the few shards of entertainment in a show parched for fun. Among the HFA’s many dirty little secrets is the behind-the-scenes negotiations: If you show up, you win. No worthy contender who’s out of town is even mentioned (screw you, Boyhood). 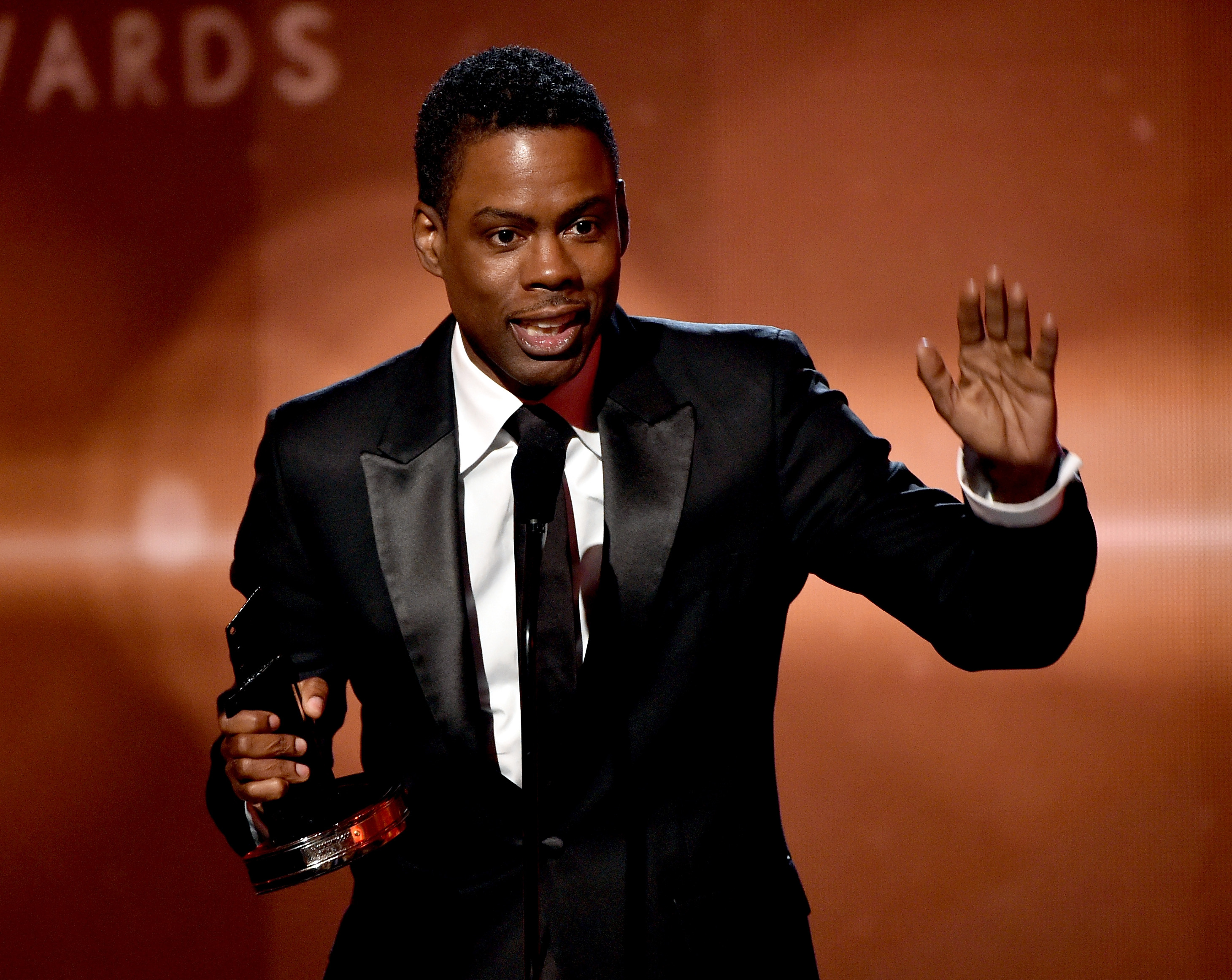 So why do actors, filmmakers and studios who are gouged a reported $25,000 for a table go along with the sham? The TV show means valuable exposure, a spark for stars to swallow their pride and say they’re honored to accept an award from an organization that wouldn’t know the meaning of the word. Oh, did I mention that the HFA doesn’t allow competition? No nominees. No rejects squirming in their seats when the award is announced. Just winners with advance notice of their victory. Why the hell would they be there otherwise? Ben Affleck, picking up the Best Picture prize for Gone Girl, apologized for reading from prepared notes, then snarked: “When they told me there were no other nominees I felt cautiously optimistic.” Nice one, Argo boy. The Hollywood Film Awards are shameless enough to make the Golden Globes look legit. There are no losers. Just the audience.