During the first season of Star Trek: The Next Generation, Patrick Stewart – who played the show’s dramatically serious, almost Shakespearean Captain Jean-Luc Picard – said something he has always regretted. A veteran of serious theater, the actor projected a grave sobriety off-camera as well as on, so when fellow cast member Denise Crosby attempted to crack his exterior, saying, “Come on, Patrick, we’ve got to have fun sometimes,” he blew up. “‘We’re not here to have fun,’ that was my line,” the actor says. “I yelled it. What an asshole. What a really, really pompous dick. But I’ve changed. I’m here to have fun more than anything else. If it ain’t fun, I won’t show up.” He bellows with laughter.

Patrick Stewart, Ian McKellen Not Returning for Next 'X-Men' Film

In recent years, Stewart, 75, has been experiencing somewhat of a renaissance in lightheartedness. Today, he’s dressed notably casually in faded jeans and a grey polo and he’s prone to wild, animated turns when discussing his latest venture into fun: the madcap new Starz comedy series Blunt Talk, which premieres on August 22nd. On the show, he plays beleaguered TV news anchorman Walter Blunt, a trustworthy broadcast journalist when he’s not working past his personal demons. The first episode alone finds Blunt drinking to excess, cavorting with a prostitute, snorting cocaine and allowing himself to be whipped by his manservant (played by Adrian Scarborough), who shouts, “You’ve been unclean, Major!” As he recounts his character’s acts, he laughs boisterously at the ridiculous adventures he’s had so far in making the show.

Although he’s dipped a toe in comedy in the past – playing King Richard in Robin Hood: Men in Tights, appearing in Ricky Gervais’ Extras, doing sketches with Jon Stewart and Stephen Colbert – Blunt Talk has been an altogether different experience for him. “It’s giddy this time,” Stewart says. “I get dizzy with the thought of it, but it’s giving me so much pleasure because I always wanted to do comedy.” His eyes widen again at the thought of it.

You fit quite well into a comedy series.
Who knew?

What do you have in common with Walter Blunt?
My first job was on my local newspaper at 15. I left school and became a cub reporter. And all I got to do were births, deaths, and marriages for a year. And then they fired me.

What TV news do you watch?
I watch a lot, cable as well as network, and BBC and iTV. There are so many options to choose from here. I’ve always been intrigued by the role of the anchorman. So when Jonathan [Ames, Blunt Talk’s creator] first said Walter Blunt was a newsman with his own show, I was on board instantly because I just wanted to be sitting behind the desk.

How did it feel when you were finally behind the desk?
It is so unlike being an actor. I know some people say, “No, no. They’re all actors. They’re all bullshitting,” but no actually they’re not. Well, many of them are not.

Do you think you could hack it as a newsman?
I have no ambitions to be Jon Stewart. I wish I were, but that’s never going to happen. But to have people bringing you the news that you can trust, who you believe are properly committed to an honest, open, revelatory and truthful kind of journalism is a marvelous thing. And Walter is like that. It’s just that he’s struggling to keep his private life in shape and he has weaknesses. But then I get media people who say, “Oh, you should be around media people more often if you think Walter has excessive weaknesses.” 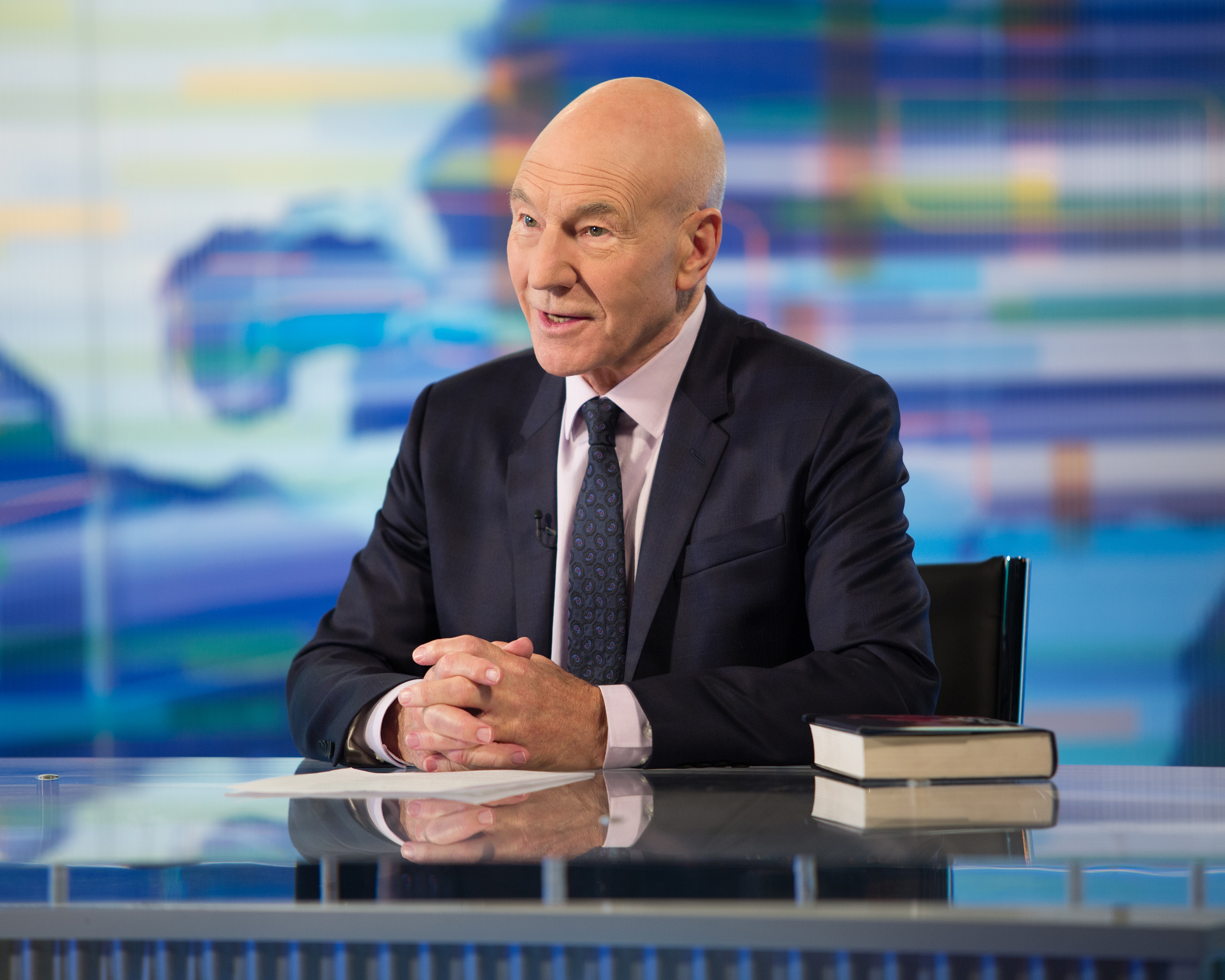 You were very serious early in your career. How did you loosen up? Did the Star Trek cast help you?
They did. They were solely responsible. If I’m funny in any way at all, they made me funny. “Oh, my God, if I’m going to keep up with these guys, I’ve got to find a way to be funny as well.” And so, I did. On Star Trek, we made this pledge to one another. Each one of us would be responsible for one big belly laugh a day. So you could say that’s seven to nine big laughs. That’s not bad for a day of work, is it?

Did you have an interest in doing comedy growing up?
Laurence Olivier was my hero when I was younger. I remember reading an interview with Olivier, where they were talking about his impact on audiences, and he said, “Oh, yes, of course, it’s wonderful to hear audiences gasp or cry out or sob. But it’s not as wonderful as hearing them laugh.” And I went “What?!” My hero! My tragic, dramatic actor talking about making people laugh! But of course, he is right. And then in another interview I heard him say, “The first thing I look for in any script I read is where the comedy is.” It is a brilliant observation. So here I am, this great age, approaching my 55th year in this business, suddenly, the lead actor in a comedy series.

“The towel-whipping is actually not an unpleasant experience.”

And you’re getting whipped onscreen.
[Laughs] Yes, whipped with towels. That’s actually not an unpleasant experience. He hit all the poisonous alcoholic chemicals out of my body. I’ve done a lot of things in this show that I’ve never done before.

Like what?
Daily, I would announce to the crew, because it amused all of us, “By the way, first time I’ve ever done this before!” I’ve never done a bedroom post-coital scene before. And I got to do it with Elisabeth Shue. I mean, how wonderful is that? I’ve never been chased by an irate husband through the canals of Venice in Los Angeles. I’ve never, never done a line of cocaine in my life. Adrian Scarborough and I had to have someone come on the set and show us how to do it. I won’t name names.

When did you first fall in love with comedy?
My earliest heroes were Laurel and Hardy, partly because I have a family connection with Stan. We’re not blood relatives, but my grandmother – who had a boarding house in Northeast of England – used to put up vaudeville artists when they came into town for the week. Stan’s parents, who were both vaudeville entertainers, would always stay with my grandmother and one day they showed up with this little baby and said, “Do you think you could babysit for us at night when we’re at the theater?” So Stan was held in my grandmother’s arms many, many, many times, so I always felt a connection with him.

What was it you liked about Laurel and Hardy?
They were profoundly serious about what they were doing [as characters]. Everything was serious and for a good purpose, but the world conspired to make life difficult for them. And even when they tried to be mischievous, it didn’t really quite work. The line that really sticks in my is, “And our wives will be none the wiser!” [in 1933’s Sons of the Desert]. Of course the wives were wiser and then they found out. So it was the intense seriousness that Stan and Ollie brought to most projects, coupled with that little twinkle that lets you know, “By the way, we think this is funny, too.” It was always marvelous.

What other comedians did you like?
Danny Kaye was an early hero of mine. I liked his craziness, his fantasy world in the original Walter Mitty movies. I knew, as a child, what it was like to live in an imaginary fantasy world. God, it was better than the world I was actually in.

You have a fantasy dancing scene with a bunch of showgirls on Blunt Talk that reminded me of Danny Kaye.
Danny would have loved being in that number. He would probably have danced it better than me, but he would have loved being in that number. There were indeed days where I would almost have to pinch myself to convince myself this really was happening.

Speaking of pinching yourself, outside of TV, you and your pal Ian McKellen are now part of Taylor Swift’s “squad.” So what are the fringe benefits?
We are waiting on communication from Taylor of what she exactly expects of us given that she has invited us to be part of her squad. She’s gonna be in L.A. shortly, so maybe we’ll find out.