Oscars 2016: Why Chris Rock Should Host This Show Every Damn Year - Rolling Stone
×

It’s official: Chris Rock needs to host the Oscars every year. The whole idea of other hosts has been tried, and it has failed, from the soul-withering void that was James Franco to the locust plague they call Seth MacFarlane. Why would you ever not call Rock for this gig? Ellen DeGeneres and Steve Martin are always welcome, but Rock is just the undisputed king of award-show hosts, and despite all the other things he can do, lampooning a roomful of bloated Hollywood egos is what he does best. He made this the liveliest Oscar Night in years, especially when he was throwing fifty shades of shade at Jada Pinkett Smith (“Jada boycotting the Oscars is like me boycotting Rihanna’s panties — I wasn’t invited”) and her husband: “It’s not fair Will was paid 20 million dollars for Wild Wild West, okay?”

The last time Rock hosted, in 2005, he raised hackles all night with barbs like, “There’s only four real stars — the rest are just popular people. Clint Eastwood is a star. That’s a star. Tobey Maguire is just a boy in tights.” He didn’t get as caustic this time — in fact, by his standards, Rock was pulling his punches, even in a monologue that focused on the plight of black actors. He also bombed with dumb jokes putting down Asians and lesbians, so maybe he just didn’t have his heart in the whole diversity-is-so-hot-right-now thing. But his funniest gag was the night’s most bizarre mind-freak moment — bringing on Stacey Dash (from Clueless, now a right-wing pundit) to wish everybody a happy Black History Month. In the immortal words of Alicia Silverstone, that moment was like searching for meaning in a Pauly Shore movie.

It was a strange Oscar Night all around. Somehow, in recent months, our nation became feverishly obsessed with the idea that Leonardo DiCaprio is not merely a good actor, but an unjustly unrewarded one who’s long overdue for recognition of his artistic achievements in the “things other than looking hot in the Nineties” category. Hey, that’s beautiful, America, you go with that, though it’s not a feverish obsession I happen to share. When he won his Best Actor trophy for The Revenant, he admirably discussed climate change while struggling to simulate a facial expression. “Let’s not take this planet for granted,” Leo said. “I don’t take tonight for granted.” Having equated the survival of our ecosystem with his need for an Oscar, Leo called it a night. (He didn’t appear onstage with his old shipmate Kate Winslet — but thumbs up for her fierce reading glasses.)

The oppression of women in Hollywood could not be more glaringly illustrated than in the constant presenter pairing of “Goofy Joking Male Slob + Silently Smiling Sideboob Machine.” The agony on the great Olivia Wilde’s face as she had to endure Sacha Baron Cohen reviving his Ali G schtick — that was an indignity neither she nor any other actress should be forced to bear. At least the Oscars had the decency to spare any of the female stars from having to go onstage with Kevin Hart, whose habit of creeping out his co-presenters is just one of the things that make him a menace at award shows. (Tonight Kevin Hart decided to get serious and share his innermost feelings about diversity, which was far less painful than watching him harass Salma Hayek.) 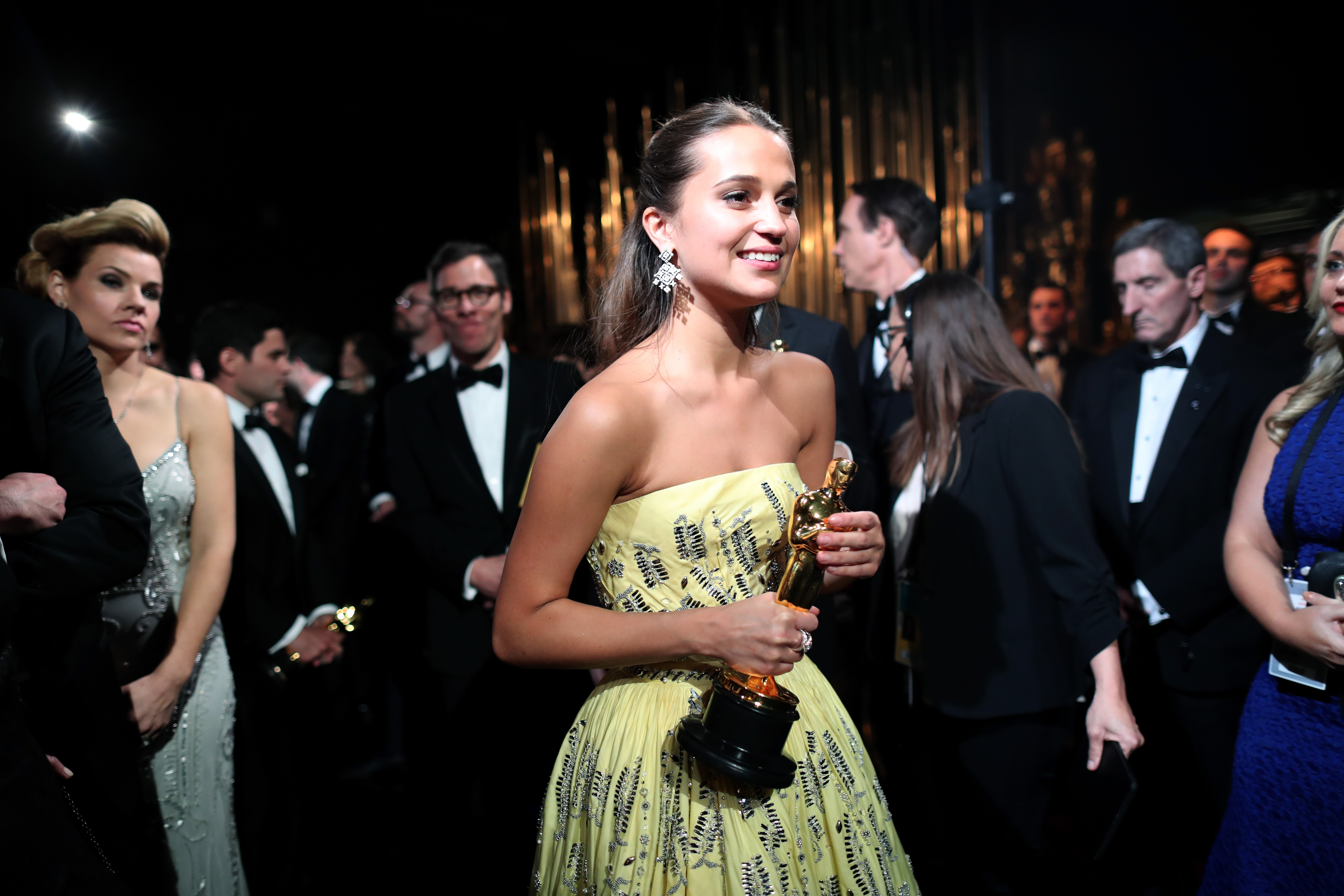 Alicia Viklander won Best Supporting Actress for The Danish Girl, looking extremely Ariana Grande (though Ariana’s more of a Donut Girl). Jared Leto went for the “red rose as choker” look, just as Harry Styles did with his yellow rose at the American Music Awards. C3PO made a cameo, which made Room‘s little kid Jacob Tremblay quite happy along with the rest of us. (Tremblay also had the night’s best fangush for Chris Rock: “Loved you in Madagascar! He’s the zebra … he’s hilarious!”) Ennio Morricone won his first Oscar ever, besides the honorary award he won in 2006 — the classic moment where he gave his speech in Italian while Clint Eastwood translated. There were also great speeches from Pakistani director Sharmeen Obaid-Chinoy (Tthis is what happens when determined women get together”) and the Chilean duo of Gabriel Osorio and Pato Escala, with their touching “¡Viva Chile!” Wow, politicized speeches that aren’t just smarmy self-congratulation — quite an exotic concept in Hollywood. The most disappointed non-winner? Sylvester Stallone — yo Sly, stay away from the poker table. But Eddie Redmayne sitting in the audience clapping tearfully is more entertaining than most stars’ entire filmographies.

A welcome innovation this year was letting the winners cover their thank-you lists in a ticker scrolling at the bottom of the screen. Punk bonus: The winners in two categories for Mad Max (Sound Editing and Sound Mixing) thanked Kira Roessler in the ticker; she played bass in Black Flag circa Slip It In, and made the twin-bass Dos records with Mike Watt before going into the film biz. She might not have her own Oscar yet, but as any Black Flag fan knows, Kira’s got the 10 and a half. Respect! (And if you’ve never heard Dos, check out “Taking Away the Fire.” What a song.) When the Nina Simone doc got beaten out by the Amy Winehouse doc, the orchestra celebrated with a hysterically tasteless vamp on “Rehab.” (R.I.P. to both Amy — “for my Blake incarcerated!” — and Miss Simone.) The orchestra kept doing wedding-band versions of movie songs, some enjoyable (“Bittersweet Symphony” from Cruel Intentions, to introduce Ryan Gosling and Russell Crowe) and some not — using Wagner to interrupt the speeches was a bad look, especially when playing off the director of a Holocaust film, Son of Saul‘s Laszlo Nemes. But at least they slipped in “That’s The Way of the World” as a stealth tribute to the late great Maurice White.

As the night rolled on, Rock did a running gag about selling Girl Scout Cookies — it was the ideal crowd for hawking Thin Mints and Toffee-Tastics, since most of them probably hadn’t been allowed near solid food in days. He also reprised the bit from his 2005 hosting gig where he interviewed black moviegoers, except with Straight Outta Compton jokes instead of White Chicks jokes. (The guy who gave his favorite movie as Superfly — now there’s a star.) He reached back to the Nineties for his beloved Suge Knight jokes, which he’s been doing since Biggie was still alive. (Who can forget Rock’s review of “Mo Money Mo Problems”: “‘I’m coming out’ … what does that mean, ‘Suge’s in jail so I can leave my house?'”) 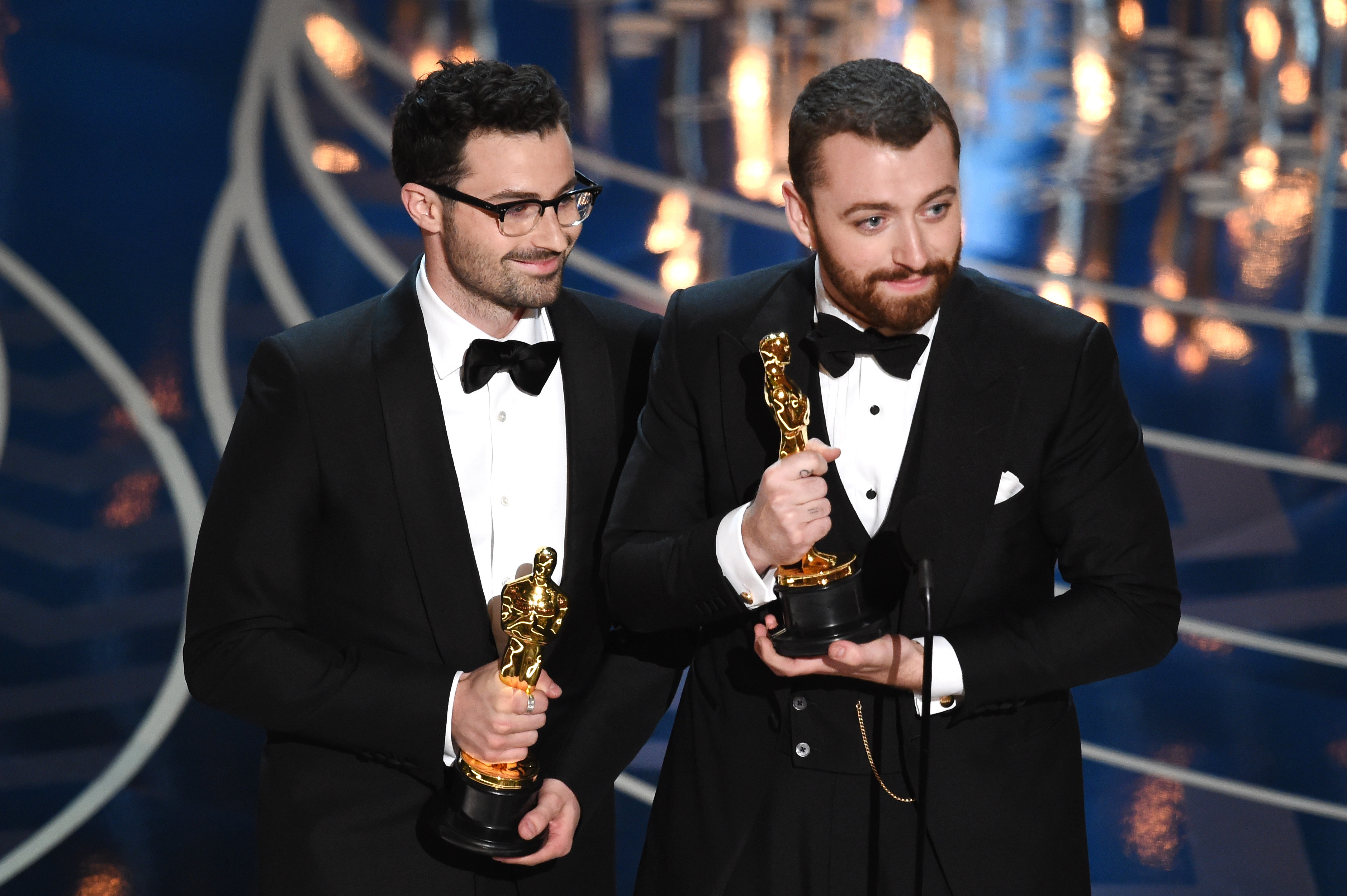 Sam Smith picked up a trophy for a spleen-squeezingly awful James Bond theme song that Radiohead should have done instead. In his speech, he cited a fact that isn’t true (the bizarre boast that he’s the first out gay artist to win an Oscar), and then added “If this is the case, even if it isn’t the case,” which means he has a promising future in internet journalism. (Apparently and reportedly!) Abe Vigoda got left out of the In Memoriam reel, yet somehow that just made his presence more tangible. Buona notte, Tessio. It did include Holly Woodlawn (the first gay artist ever to be mentioned in an In Memoriam reel, if it’s the case, even if it isn’t the case) and David Bowie (the Zoolander quote was a deft touch). Dave Grohl played “Blackbird” on guitar. Man, people sure do like to get mad at Grohl for being the only Nineties dude left standing to take on Nineties-dude duties like this, but that’s not his fault, now is it? Any guy who can croon “Blackbird” to the memory of Leonard Nimoy two weeks after eulogizing Lemmy at the Grammys is serving valiantly. (Although they turned down the audience volume to discourage competitive clapping, it sounded like Mr. Spock nudged out Alan Rickman in the Applause-O-Meter.)

And yeah, right, the show lasted a few hours, as usual, but people who complain about the Oscars going too long are just people who don’t like pointless award shows, just as people who don’t enjoy football think the Super Bowl takes too long. It’s not really a relevant or interesting complaint, especially since the Oscar Night is always the most-watched non-football TV broadcast of the year. The fact is that many people love watching the Oscars because we enjoy seeing famous, beautiful, brilliant and/or dangerously sedated movie stars make gilded fools of themselves, and this Oscar Night did not disappoint in that category. Especially now that our long national nightmare is over and we’ve finally gotten an Academy Award statuette into Leonardo’s itchy fingers — maybe that means we can finally get to work on climate change. See you next year, Chris Rock.

Watch some of the best, worst and WTF moments for this year’s show.