'Orange Is the New Black': The Tao of Crazy Eyes - Rolling Stone
×
×

If Litchfield Penitentiary had a Buddha, it would be Suzanne “Crazy Eyes” Warren. The mentally unstable inmate with a heart of gold has become one of Orange Is the New Black‘s most riveting characters, and as portrayed by Emmy winner Uzo Aduba, Suzanne has gone from prison newbie Piper’s floor-peeing stalker to evil mastermind Vee’s manipulated patsy. But through it all, she has remained the series’ most uncannily sage-like figure, doling out cryptic wisdom on everything from love to coping to proper showering technique.

As Netflix gets ready to drop Season Three for your binging pleasure on June 12, we’ve compiled Crazy Eyes’ greatest aphorisms and words of advice, ranging from the bizarre to the profound — even if those words are being delivered via a mop speaking in a British accent.

'Orange Is the New Black' Roll Call: Know Your Inmates

On making a first impression:
“Before I met you, the sun was like a yellow grape. But now, it look [sic] like fire in the sky. Why? Because you light a fire inside me.” (Season 1, Episode 3)
Suzanne sure knows how to woo a prison wife. First, she swipes hot peppers for a starved-out, new-to-prison Piper. Later, she comes up behind her on the Litch’s running track and delivers a poem she composed for her “dandelion” that would make Pablo Neruda proud. Too bad it all ended in heartache and urine.

On keeping a relationship alive:
“You know, if you were still my wife, I would tell you all the time how much I like your titties. ‘Cause girls like that. And that is a tip from me to you.” (Season 1, Episode 11)
When Suzanne encounters Piper and her it’s-complicated lover, Alex, having a tense discussion about their messed-up past, her counsel is simple: Stop waffling and start complimenting her boobs.

On dealing with stress:
“Sometimes the feelings inside me get messy like dirt. And I like to clean things, pretend the dirt is the feelings, and this floor is my mind. That is called coping. And the COs don’t care, ’cause they like things clean. And that is called symbiosis. . . You gotta start from the inside out, or else you’ll step on the clean.” (Season 1, Episode 12)
There’s probably no inmate happier to be on maintenance duty than Suzanne. When Piper runs into her in the bathroom, mopping in the middle of the night, she accounts for her compulsive floor-shining habits by going full Zen.

On following your bliss:
“I would also like to work with round objects. Yeah, round things are very pleasing to me.” (Season 2, Episode 2)
When a career-counseling team comes to the Litch to offer the inmates advice on their post-prison job prospects, they didn’t count on Crazy Eyes. She allows that she’d love to work with mentally ill kids, but that’s not the full dream career. And Suzanne won’t settle for anything less than all the spheres she can handle.

On getting past slights:
“Don’t take it personal. I try not to. Now I know what you’re gonna say. ‘But Susanne, my heart hurts!’ And I hear you. I do. A lot. But you gotta put your head down, keep on buffing those floors. Clockwise and counterclockwise. ‘Cause sometimes people just don’t wanna play with you, and that’s okay.” (Season 2, Episode 3)
Suzanne was speaking from years of painful experience when she offered drug kingpin Vee these words of comfort after Taystee gave her the brush-off. Our girl knows how to make her own fun, even when her heart hurts.

On improper use of contraband:
“Chang, she got that Tiger Balm, but don’t put it on your lips. Or your eyeballs. Bad idea.” (Season 2, Episode 4)
Vee asks Suzanne for the skinny on who’s smuggling what into the prison, and finds out more than she needs to know about the commissary’s business practices — and about the horrors Suzanne inflicts upon her own face.

On grinning and bearing it:
“The secret is to pretend the salt is sugar.” (Season 2, Episode 5)
Mendoza and her kitchen workers retaliate against Vee and her gang by salting all of their food to the point of inedibility. But while the others are spitting their mac and cheese back onto their trays, Suzanne gleefully spears a carrot. (The salt is a metaphor, folks.) 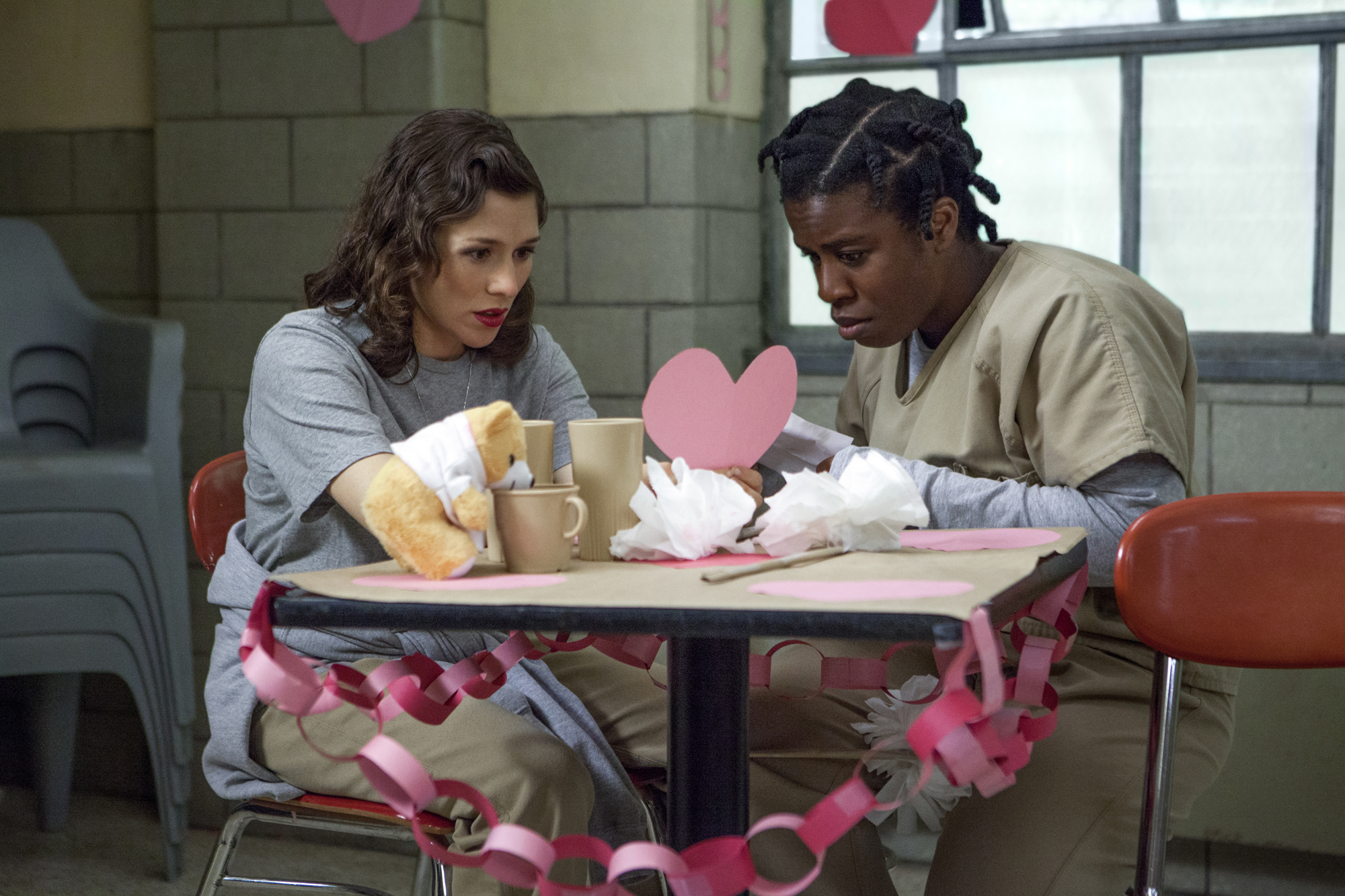 On what love means:
“It’s like you become more you. Which normally is like… [Explosion noise]. But now it’s okay, because the person, like, whoever…they chose to take all that on. All that weird stuff, whatever’s wrong or bad or hiding in you. Suddenly, it’s all right. You don’t feel like such a freak anymore.” (Season 2, Episode 6)
With Valentine’s Day approaching, the isolated inmates each offer their take on the meaning of love. They range from the absurd (“It’s like getting a bath, but the water is warm chocolate pudding”) to the heartbreaking (“Pain. Horrible pain. That you want again and again”), but Suzanne’s definition was the one that straight-up made us cry.

On proper skincare:
“You do know that long showers are bad for you. Yeah. Yeah. Mess with your keratinocytes and whatnots [sic].” (Season 2, Episode 6)
When Vee and her girls wind up with a bathroom full of busted showers (maximum wash time per person: 30 seconds), everyone is pissed that they have to soap up by the sinks. But as per usual, Suzanne makes lemonade. And yes, keratinocytes are a real thing.

On washing dishes the right way:
“Would you clean the sink with a piece of raw meat? No, you wouldn’t, because of germs. A filthy sponge is like a rectangle of smelly meat. Studies show that bathroom sinks have more germs in it than a toilet. You gotta disinfect!” (Season 2, Episode 7)
Sure, Suzanne only pulls this one out to cover her friends’ tracks when a guard pops by in the middle of Vee’s contraband cigarette operation. But these are words to live by. Old sponges are gross, people.

On moving forward:
“My therapist says: Yesterday is history, tomorrow is a mystery.” (Season 2, Episode 13)
Shit certainly hits the fan for Crazy Eyes at the end of Season Two, when she attempts to take the fall for Vee after said scary mother figure “slocks” the crap out of Red. When investigators from the S.I.S. catalogue her past offenses, Suzanne lets it roll right off her back by quoting her therapist, who — side note — we’d kill to meet.