It’s a long, strange journey from studying journalism at the University of Oklahoma and interning at a network affiliate’s newsroom to playing a fake reporter covering real news to a “real” journalist on a fictional cable TV series — something Olivia Munn is all too aware of. “It’s dizzying when you think about it, yeah,” the 34-year-old actress and Daily Show veteran says, laughing. “But the weird thing was, journalism school ended up being the best preparation I could have had for doing both the Daily Show and this project. Instead of mimicking some idea of what a journalist does, or having my idea of being a reporter based solely on someone you’d see on TV, I could pull things from my own experience. It wasn’t just imitating Diane Sawyer and Anderson Cooper. I knew how the sausage got made, so I could bring that knowledge to the table.”

Is 'The Newsroom' the Best Bad Show Ever?

“This project” is, of course, The Newsroom, Aaron Sorkin’s highly divisive HBO series that starts its third (and final) season this Sunday. Given Munn’s past gig as a wisecracking co-host of G4 Network’s geek-centric Attack of the Show! and her tenure as the “Senior Asian Correspondent” for The Daily Show, her presence on the ensemble dramedy initially suggested she’d be the show’s designated comic relief. Instead, Munn spent most of the first season on the periphery and all of her off-set time being forced to defend Sorkin from accusations that he couldn’t — or simply wouldn’t — write complex female characters. Thankfully, she’s become a much bigger presence on the show and, judging from the first few episodes of Season Three, her character, TV economist Sloan Sabbith, is poised to play a bigger part in the final go-round.

Rolling Stone spoke to Munn about filming this last season, out-motormouthing her fellow cast members and how she’s 100 percent down for the recent rise of geek culture.

The show has wrapped, right? How was the last day on set?
It’s all over, yeah. There was a last day in Los Angeles and a last day in New York; luckily for me, I got to be here in Manhattan for my final scene, so I was at both. There was one last shot that Thom (Sadoski, who plays her romantic interest Don Keefer) and I had to do, and it was super-late at night; we were ready to pack it in. Then we found out that Jeff Daniels and Emily Mortimer were going to be shooting the very last scene of the series, so we ran over to their set and waited — and got to watch them wrap the whole series. It was pretty amazing.

Is there a trick to mastering Aaron Sorkin’s dialogue?
I think the trick is, you go through the entire script first and find the overarching theme. I’ve usually got a lot of financial jargon to say, or I’ve got to explain some wonky factual things — why they matter and are important — and do it in a way that’s still emotional. So once I go through everything a few times and I know exactly why I’m saying what I’m saying, I can memorize it. If I know I’m saying something I understand and can make it come from my heart, then it’s very easy to speak about.

And then you just need to learn to say it 10 times faster than the average human being.
Unless you’re me. I think I’m the only person who Aaron Sorkin has ever told to slow down.

“Can you say that a little slower?” is not something I would imagine ever gets said on an Aaron Sorkin set.
I’ve actually asked the crew about this, and they assure me that, “No, Olivia, you are indeed the first to get this request. It’s really never been said before.” I tend to talk very fast, so sometimes, when I’ve got a lot of dialogue, my nerves get the best of me and I just speed up. I’m going “Come on, Olivia, you know the lines, it’s all good, the hardest part is being able to speak fast and you can do that, you only have to slow down.” I tell myself, “Just slow down. It’s actually very easy.” And then it comes out like [makes speedy chipmunk-like noise].

How would you compare a typical day on The Newsroom set to a typical day on the Daily Show set?
For The Newsroom, you’d come in and have massive amounts of dialogue that needed to be memorized and recited to near perfection. In addition to that, there were a lot of moving parts that had to go into it — not just memorizing and saying a lot of lines, but you also have to be walking and talking, and doing other things. There’s not a lot of waiting around on set — it’s constantly going, going, going. You’re in hair and makeup, then you’re on set and you’re going pretty much nonstop until you leave.

With the Daily Show, you’d go in during the morning and there’s a writers meeting. Everyone’s talking about the news of the day, going over stuff that they’ve seen on TV and coming up with story ideas. Then Jon comes in — and I don’t know how he does it, but he always knows everything that’s going on in the world and has already seen everything. 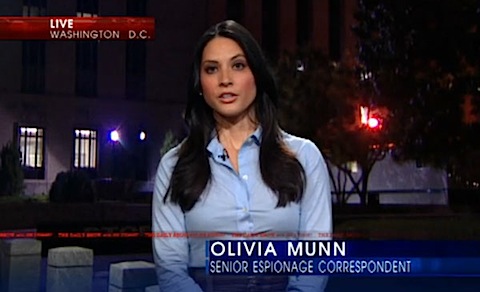 Sorry, Jon who?
Oh, right…Jon Williamson. He’s a barista at my local café, you wouldn’t know him [laughs]. So the writers start pitching, stories get hashed out and you figure out if you’re going to be in a sketch that day. If you are, you started working with a writer to get it into shape; if you have a package [one of the filmed field reports the show airs], you worked on the editing for that. Then you hang out until rehearsal, and you watch Jon do his magic. So it was a little different. The one similarity is that the script was sacred at both places. The key was always to make it seem like you weren’t reading lines given to you from some of the best writers ever. The nicest compliment you could get would be, “Oh, did you just improvise that?”

I’m the only person aaron Sorkin has ever told to slow down.

Did you find yourself getting approached by financial-industry people and have them correct you on things, or simply want to talk shop?
The amount of research that went into those lines, are you kidding? There’s so much hardcore jargon in Sloan’s dialogue that we’d have two or three people going over every single line to make sure it’s airtight. I remember once I had this long scene with Thom where I’m reciting paragraphs and paragraphs of information, and I can’t get through it. Finally, on the third try, I nailed it — and we found out that I’d accidentally been saying the company’s name wrong the whole time, to the point that I was actually referencing a totally different company. We had to do it again.

I do get a lot of financial people coming up to me and asking me if Sloan is based on them, or on someone they know. You know, “She’s really this person, right?” [Laughs] I’ve had a lot of journalists ask me if a certain line or a particular episode’s story was taken from their life. And I’ve also had female reporters and business women tell me that they see a lot of themselves in Sloan. I’m not going to lie: That’s really, really nice.

Did it feel different filming this season with the knowledge that you’re doing these six episodes and then that’s it?
You know, with movies, you follow the story of characters and you see it to the end — it’s usually contained, and I kind of like that. And with TV, it just tends to go on and on and on. So while it wasn’t strange coming back to film this final season — I mean, we’re playing the same characters and Aaron is still calling the shots — it did feel a little different knowing that the story is almost over. There’s an end coming. As to what that end was going to be…I mean, that was a constant topic of conversation among all of us as we waited for those final scripts. There was a lot of “So what do you think is going to happen?” I remember I was sitting in bed reading one of the scripts — I think it was for episode five. I got to one part and I just…I literally threw the script down, jumped out of bed and screamed! It was so intense — you know, “Oh my god, Aaron went there. Wow.” So whatever disappointment we may have had over the fact that the series only played for three seasons and was now ending, it was balanced out by just being so excited over each new script that we got. It was the last season, so [Sorkin] could do whatever he wanted, and that was thrilling.

I’m assuming that the shocking thing you’re talking about regarding that episode would be the revelation that Sloan is actually a man, correct?
[Laughs] You know Two-Face, that Batman villain? It’s going to be like that. From one angle, Sloan will be a rugged dude. But from the other angle…a pretty financial reporter!

Do you think the show got more of a bad rap than it deserved? And do you think this last season will change the way people viewed what Aaron Sorkin and you guys were trying to do with this show?
It was interesting that in the beginning…I’ve said this before, but I think a lot of critics and journalists though that the whole idea behind the show was that we were setting out to be the Monday morning quarterback: “This is how you should have done it. You should have covered the story this way.” And knowing Aaron and having been on the show, I find it a little fascinating because that was not the intention at all. What I think he was trying to show was just how unfair it has become for journalists to do their job. They have to compete with all these cable news programs and the Internet and everything we’ve got going on, in terms of Twitter and other social media. Now the job is not just delivering the news; it’s scrambling for ratings. It’s having to deliver sensationalized stories so viewers will tune in. It’s no longer about informing people or telling them a story about the world.

The thing is: Aaron loves journalists. He’s fascinated by the whole process behind the news: what gets covered, how it gets covered, what gets buried and why. And I think he wants the audience to be fascinated by that as well, and to realize that, we as an audience need to reward good journalism with our attention and our eyeballs. If we watch shows that actually give us informed, well-researched, well-reported, unbiased news, then the idea is that networks will support that.

You’ve been an advocate of geek culture since your Attack of the Show! days. Does it surprise you that this culture has, in large part, gone from being something on the fringe to arguably the guiding force of mainstream pop entertainment?
I think it’s great. I’m sure it’s cyclical, but giving the reins to people who are smart and geeky and passionate, and not trying to be the equivalent of the popular kid in school…I mean, that’s most of us, right? [Laughs] I like the fact that they get their shot. Let them run pop culture for a bit.