Kevin Owens’ first NXT shirt is simple: Just his initials, KO, on the front. Little did we know that was also foreshadowing the way he would win his first NXT title.

Just two months after his debut, Owens defeated Sami Zayn to take the championship in the main event of Wednesday’s TakeOver: Rival. It’s difficult to say what was the most surprising aspect of that result: The speed with which Owens ascended to the top of the promotion, the ephemeral nature of Zayn’s title run, or the sheer ferocity of the finish. Like most of the Internet, I’m going with option three.

Simply put, Owens brutalized Zayn throughout the match. From the beginning, he threw stiff shots at Zayn’s head. Every time Zayn would attempt a comeback, another shot, or a vice-like submission hold, would cut him off. The pacing, the psychology…it was all perfect. It came to a crescendo after a dive to the outside, when Zayn hit the ramp hard and sold a head injury. He slowly got back into the ring, but something was clearly wrong: He stumbled a few times, and needed the ropes to stand. After a small back-and-forth, it looked like Zayn was about to hit the Helluva Kick, but stumbled. He valiantly tried to continue, but Owens hit him with a powerbomb. As the ref checked on Zayn, Owens continued the assault, whipping Zayn into the ropes and hitting him with a series of forearms and kicks that required the referee to physically intervene. It was difficult to watch.

NXT 'TakeOver' Preview: The Future of WWE Is All About the Past

Finally, intent on destroying his longtime rival, Owens went for another series of powerbombs. Midway through the mauling, doctors – who had been summoned ringside to check Zayn for concussion-like symptoms – begged the ref to stop the match. He did, and with the crowd buzzing nervously, declared Owens the winner, and new NXT Champion.

This served to be a fairly unsettling scene. The crowd was rabid the entire time, and yes, there were fans who were chanting “Fight Owens Fight.” However, even those who were cheering for the first powerbomb fell into silence by the time Zayn was dropped for the fifth or sixth time. While they popped again once Owens was declared the champion, it seemed that a real sense of unease had fallen over the NXT Arena. The scene was beautifully shot by the crew as well, as they cut to the crowd in the midst of the beatdown to get shots like this: 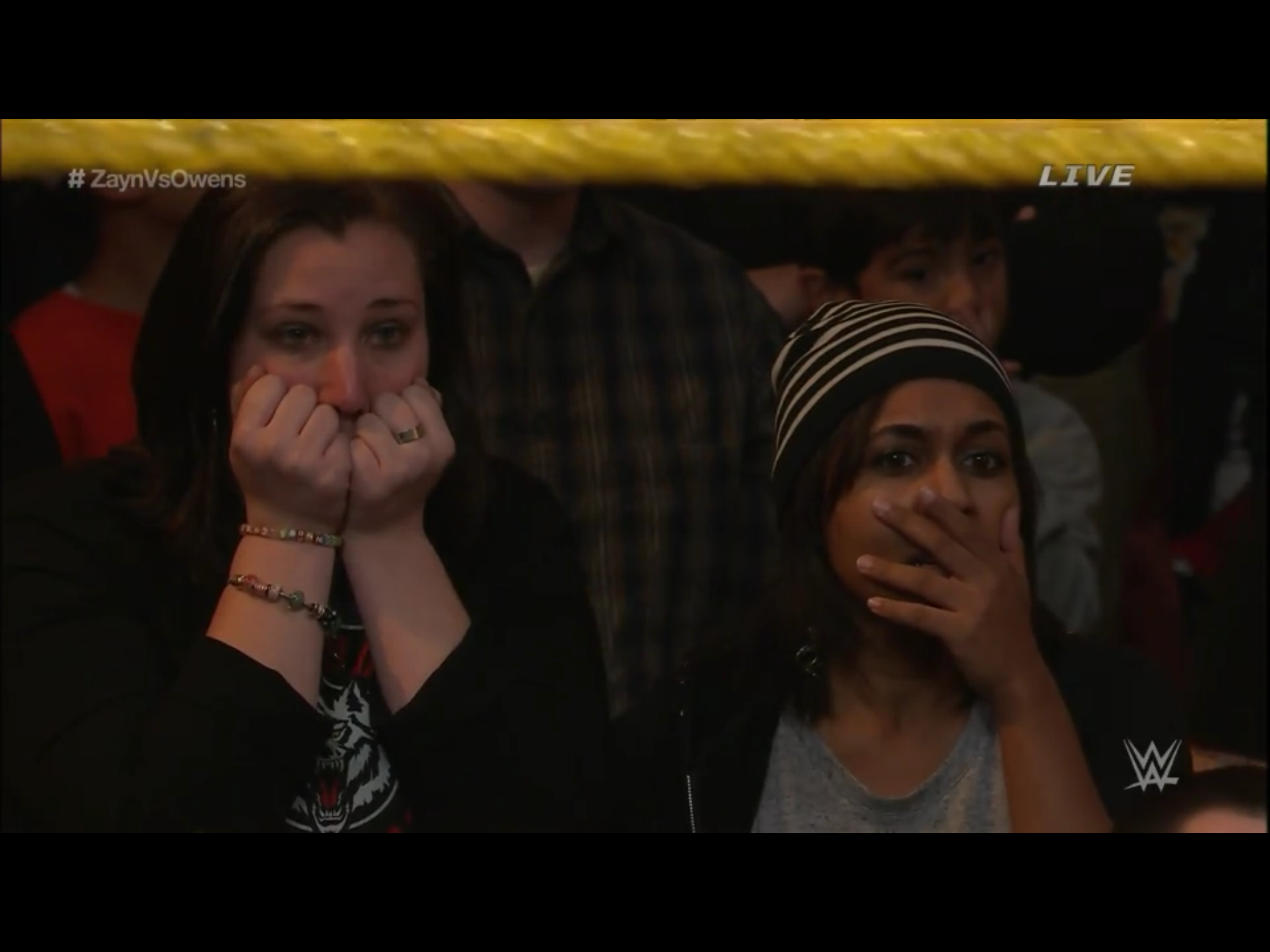 The knockout, or ref stoppage, is a rare thing in wrestling, particularly in the WWE. Occasionally it’ll happen when trying to establish a wrestler, like when Tensai destroyed Yoshi Tatsu in 2012. Sometimes a ref will call for a match due to a loss of blood, though the last time that happened in WWE was at SummerSlam in 2005, during a match between Edge and Matt Hardy. One of the few times I can remember something like this – where the ref prevents a fairly big match from continuing due to one wrestler being unable to fight – was in 2007, when Randy Orton injured Shawn Michaels. The big difference in that one was the match only lasted five minutes, and it was Orton himself who tossed Michaels to the side, rather than the ref jumping in.

Why is a ref stoppage so rare? While it certainly shouldn’t be overused, you’d think that it would be a great way to extend a feud. You can’t tell me that Lesnar KO’ing Cena instead of pinning him back at SummerSlam wouldn’t have been a better way to go.

So why don’t they do it? There are only two reasons I can think of. The first is that it usually involves head trauma, and that’s such a hot-button issue right now. That’s valid, though there are ways to do a finish without going to the lengths they did on Rival. The only other thing I can think of is that it has too much of an MMA feel to it. For whatever reason, the WWE has been hesitant to embrace aspects of MMA. This is a mistake, as Vince McMahon should be embracing aspects of other popular sports. That’s how innovation in the business occurs, and can only help expand the fanbase.

NXT once again showed it can buck conventional wisdom, and it made for a memorable ending at NXT TakeOver: Rival.

The biggest story was the NXT title, but it can’t be understated how good the four-way for the Women’s title was. You could make the case that over the past year, Sasha Banks has become the most well-rounded woman in the company, both in-ring and with her character. So it’s only fitting that she was rewarded with the belt. After the great match, Sasha shoving Charlotte away from the handshake and hug just drove that point home. The match also did a great job of building Bayley as a truly credible threat for the title. It will be interesting to see where they go from here, as Sasha and Bayley have been feuding for so long already, but with some new blood rising in the division, like Alexa Bliss and Carmella, I’m sure they’ll be able to keep things fresh.

While the Number One contender’s match between Finn Bálor and Adrian Neville was as great as expected, once again Bálor’s entrance and war paint drew the most buzz. It’s a fantastic move to save these things for the special shows. Too often, there’s no difference between a regular show and a pay-per-view. It used to be that wrestlers would wear special outfits for big matches (not just for WrestleMania), or muscle-up their entrance. It just gives the match more of a special feel to it, and Bálor bringing that back is a great thing. As far as moments, this match easily stole the show, with both wrestlers going through several big spots, including a crazy second-rope Phoenix Splash from Neville, before Bálor came away with the win. The pacing was a bit off, but this one definitely picked up at the end and delivered. Can’t wait to watch Bálor begin his chase of Owens.

Hideo Itami and Tyler Breeze kicked off the show with a very solid match. The idea of “curtain jerking” as a bad thing has gone completely out the window, and this one really illustrated that. The first match of a show now sometimes ends up being one of the highlights, and is used to get the crowd going. This match certainly did that. Breeze is in an odd place right now. Six months ago he was near the top of the card, and was one of the most popular guys (even as a heel) on the NXT roster. But with the recent additions, he’s fallen by the wayside somewhat. Both Breeze and Itami will be interesting to watch over the next few months.

Baron Corbin’s match with Bull Dempsey was fairly expected. Dempsey got in some offense, including hitting his finisher, but Corbin shrugged it all off before getting the win. Corbin has a presence to him, and that presence has basically carried him to this point. The question is: How long will these matches satiate fans in the NXT Arena, especially given the usual strength of the other bouts on a show?

The match for the tag titles between Blake and Murphy (affectionately known as the Dubstep Cowboys) and the Lucha Dragons was the one disappointment of the night. Both teams had major botches on moves, and four combatants never seemed to gel. The match was clunky, partially due to the botches, and partially because they just seemed to want to get from spot to spot, rather than keep things fluid. I think Blake and Murphy have potential, and the combination moves they have come up with are great. However, they need to string together a complete match to show why they were slingshotted into the belts as quickly as they were.