Maybe you started to notice it last March, when AMC’s The Walking Dead featured a zombie’s head gets bashed in repeatedly by the butt of a machine gun. Perhaps it was during a key episode of Game of Thrones when the Red Viper, Oberyn Martell, unwisely lets his guard down in a fight — and the result is something that resembles a ripe melon given the Gallagher treatment. Or it could have been the moment on FX’s pandemic procedural-cum-horror show The Strain when an airport worker is drained of blood and skull-pummeled until there’s nothing left but a red blotch of punctuation on the floor.

And those are just the heads.

On television shows built for old-fashioned scares (NBC’s Hannibal, Showtime’s Penny Dreadful) and on those aiming for a little more prestige (Steven Soderbergh’s new Cinemax series The Knick, HBO’s The Leftovers), scenes of stomach-turning gross-out shocks are increasing. The Knick‘s surgery scenes are a must-avoid for the squeamish. And on The Leftovers, an often bleak show got even more grim with a close-up depiction of a stoning in its fifth episode, which caused a TV critic at Entertainment Weekly to quit watching.

'The Knick': Blood, Sweat and Cocaine

For most, though, these scenes are far from a turn-off. Some of the grossest shows on television are both adored and acclaimed: The Walking Dead’s previous season premiere was the most-watched hour of cable television ever with 16.1 million viewers, with a separate SportsCenter-style after-show — Talking Dead — devoted to replaying zombie kills like game highlights. HBO’s Game of Thrones, which regularly pushes the boundaries in both nudity and violence, was nominated for 19 Emmy nominations for its fourth season, which also featured a grisly death by poison and many body parts hacked away in battle scenes. Even the critical hit Breaking Bad, a much milder show than the aforementioned programs, featured a visceral scene involving bodies after they’d been dissolved in hydrofluoric acid and the severed head of Danny Trejo memorably riding atop a tortoise.

Alan Sepinwall, an author and TV critic at Hitfix.com, says he’s noticed an uptick in gore-as-spectacle in the shows he covers. “I’ve been doing a lot of traveling by airplane lately,” Sepinwall says, “and it’s been much harder than usual to find screeners of things I can watch without grossing out the person in the seat next to me. I think the effects are easier to pull off [now], but I also think it’s a way to get attention. Whether you think The Walking Dead tells its stories well or not, whether you think the characters are compelling or not, no one disagrees about how creative, memorable and graphic the zombie kills are,” he said.

On The Strain, based on a trilogy of novels co-written by filmmaker Guillermo del Toro, the infected vampires are not the shimmery, pretty lovers of Twilight. Rather, they’re disgusting, sickly, noseless predators with six-foot proboscises shooting out of their mouths to seek blood. Del Toro, who directed the show’s pilot and is hands-on in its production, says he is used to playing in what he calls “closed sandboxes” after years of making movies that required conforming to a PG-13 rating (Pacific Rim) or the limits of an R (Pan’s Labyrinth). But he says as far as gore and violence, he’s not reined in by the TV network.

“FX was very clear about frontal nudity, and what profanities you could or couldn’t use,” Del Toro says. “But when it came to graphic violence, they just said to me, ‘Do whatever you feel you need and we’ll support you as far as we can.’ They never set a limit.”

The director says his approach to the program’s gore was partially inspired by the 1970s series Kolchak: The Night Stalker, which once aired an episode with a rotting corpse attacking gangsters. “It was very realistically rendered,” says Del Toro. “It looked like a decomposing corpse. I was absolutely floored as a kid. So now, I’m trying to imagine being a teenager and getting together with my friends to watch The Strain when I’m thinking of what to do on the show.” 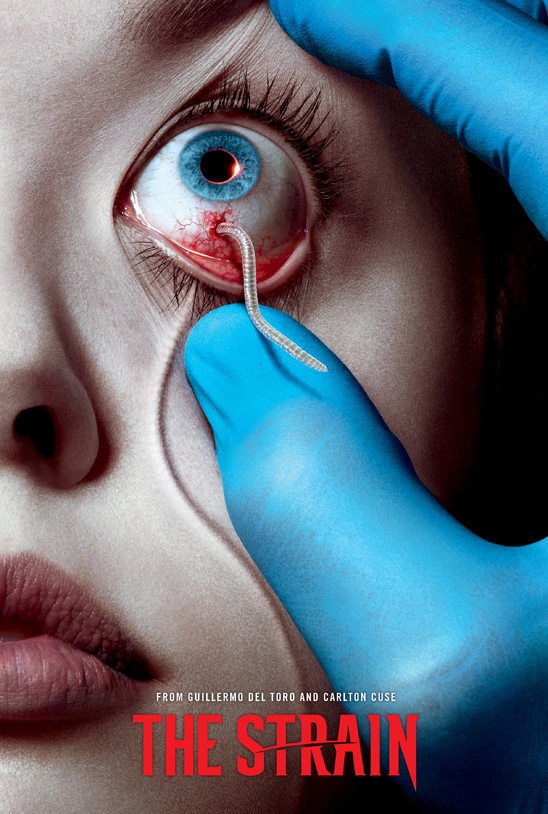 Before the series debuted in July, its marketing campaign was already disturbing some: Namely, the giant billboards showing a parasitic worm digging in to an eyeball in extreme close-up. FX pulled the ads; Del Toro called it truth in advertising. “I think people who reacted wrong to the billboards shouldn’t watch the show,” he says. “It’s not for everyone. It’s a show that’s fun if you like the genre.”

“There was a scene in the books, however, that was just too shocking (to include in the series pilot),” Del Toro admits sheepishly. “Worms were crawling over a victim’s legs and digging into the legs and going a little upward and digging in. I said, ‘That’s too much. We cannot do that.’ That would have crossed the boundaries of fun.”

When it came to graphic violence, they just said to me, ‘Do Whatever You feel you need…’ They never set a limit.

One reason gore has become more pronounced on shows like these is that the makeup and computer effects necessary are easier to pull off and cheaper than in the past. Even on a TV budget, showrunners and producers are working to make a big-screen impression. “We’re trying to push the look of the series to look far more expensive than it is,” Del Toro says. “We now have cutting-edge makeup effects, cutting-edge digital effects. We couldn’t have done it 10 years ago.”

Given that so much of the golden age of television is crimson-tinged and popular shows like the CSI and NCIS shows on CBS keep multiplying like flayed rabbits, it may be that viewers, weaned on the icky examinations of procedurals and premium-cable boundary-pushing, have not only grown accustomed to the shocks and splatter-film excesses of today’s gore-filled shows — they now expect and crave such leave-nothing-to-the-imagination thrills.

“I don’t think (viewers) are getting blasé about it, but it’s definitely something they look forward to,” says Sepinwall.  Gross sells, and given that The Knick and The Strain have already been renewed for second seasons (the latter stayed above 2 million viewers per week after five episodes, making it a breakout hit for FX), not to mention that further seasons of The Walking Dead and Game of Thrones are waiting in the wings, there should be no shortage of guts and glory hitting your TV screen soon.