Earlier this month in Los Angeles, 2,000 National Geographic fans were treated to activations inspired by five Emmy-contending series and one stunning documentary (Free Solo) at the Greek Theatre as part of the network’s first Emmy Contenders Showcase, a one-of-a-kind outdoor experience and concert event.

Serving as emcee for the evening’s second act, Rolling Stone’s Jamil Smith invited Morgan Freeman and The Story of God producer Lori McCreary to the stage for some introductory remarks. “We are so pleased to be here with you tonight,” the Story of God host said, saluting the “incredible talents” working behind the scenes of National Geographic’s shows. “The producers, writers, directors of photography, editors, composers, sound mixers and the many others that it takes to make a production work…I can tell you, they are the heart and soul of our show, and the others we are celebrating.”

Alex Honnold Documentary 'Free Solo' Is as Extreme as the Man

“National Geographic has an inspiring commitment to finding our industry’s best storytellers to make programming that is enlightening, engaging, and, above all else, entertaining,” McCreary added, “and Morgan and I love being a part of that.”

Earlier in the day, there was a cryo spa, inspired by Life Below Zero. Attendees could step into the shoes of the series’ extreme crew and documentary subjects and get a taste of the subzero temperatures they endure on a daily basis in remote parts of Alaska, while living off the grid. Following a cryotherapy facial, guests could engage with the producers of The Story of God with Morgan Freeman, getting henna tattoos, and tapping into 5,000 years of cultural tradition.

The composer behind Ebola outbreak thriller The Hot Zone, Sean Callery was on hand for a demo, with an ‘80s drum machine, keyboards and more, illustrating how music and sound are layered to create a scene. Subsequently, guests could get in on the action themselves, scoring select scenes from the Julianna Margulies-starring series with a variety of digitally produced sounds. Just on the other side of this demo were a pair of 50-pound hazmat suits crafted for the series by costume designer Mary Partridge-Raynor, which offered a firsthand perspective on the claustrophobia of life inside The Hot Zone.

At National Geographic’s Contenders Showcase, these activities and displays were just the beginning. Guests could also play Super Nintendo games of the ‘90s, inspired by experimental Silicon Valley comedy Valley of the Boom, or cuddle up with puppies from the Hands Paws & Hearts nonprofit animal rescue, in a Hostile Planet animal exhibit. Then, there was the Free Solo space, with supervising sound editor Deborah Wallach and re-recording mixer Tom Fleischman present for a sound editing demo. 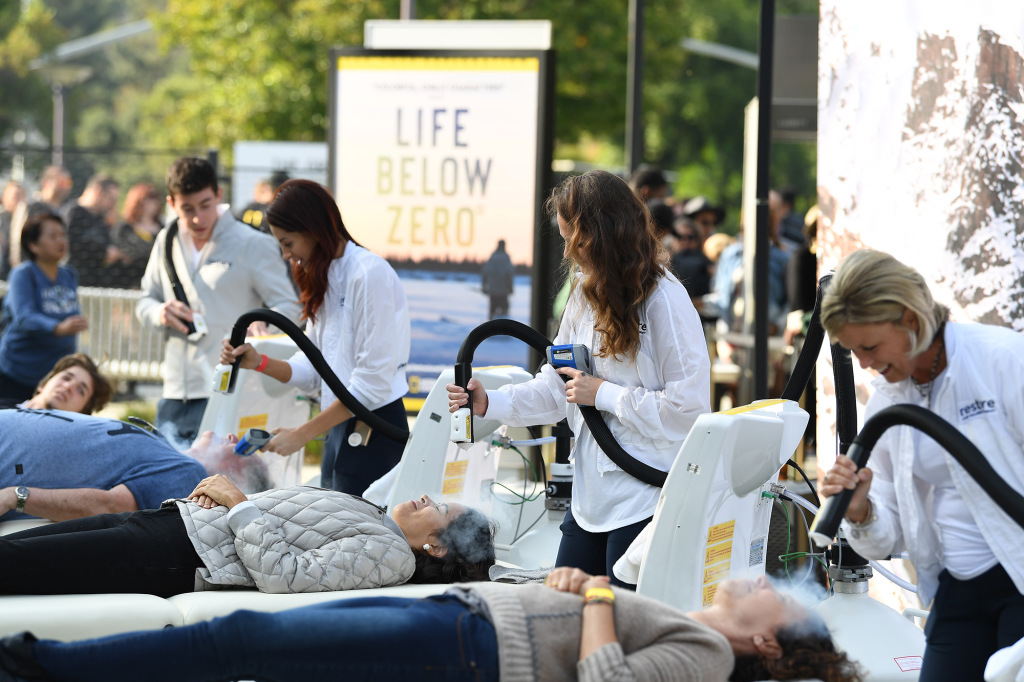 Guests at enjoy a “cryo spa’ inspired by ‘Life Below Zero.’

While hundreds of fans lined up for a book signing with history-making free solo climber Alex Honnold and the film’s composer, Marco Beltrami, there was also an opportunity for face painting, a 360-degree VR experience with elephants on the African savanna, and much more.

After enjoying these festivities, as well as ample food and drink, attendees made their way inside the Greek Theatre for a special concert event, hosted by Morgan Freeman, with a 40-piece orchestra playing along to select scenes from National Geographic titles.

After a teaser for The Story of God’s third season — which was Freeman’s “favorite yet” — it was time to hear from the talents behind Free Solo, with Honnold appearing alongside the doc’s directors, Chai Vasarhelyi and Jimmy Chin.

“Tomorrow is the two-year anniversary of when I free soloed El Capitan,” the climber said, to cheers and applause from the crowd. “What I’ve learned from working with National Geographic is that this documentary represents everything their yellow border stands for—their commitment to excellence, willingness to take risks and drive to go further.”

Giving a shout-out to the team that brought the doc together, Chin reflected on his incredible journey with Free Solo, which took him from the summit of El Capitan to the Telluride Film Festival, and finally, to the Dolby Theatre stage. “We were overwhelmed to hear that it was the most-watched National Geographic documentary the channel has ever premiered,” the director shared, “now seen by 27 million people all over the world.”

Subsequently, composer Beltrami appeared on stage alongside his collaborators, and the concert began, with the live orchestra playing along to the harrowing final moments of Honnold’s epic climb.

Following the night’s first performance, guests enjoyed a series of star-studded interludes. John Karna, Dakota Shapiro and Oliver Cooper appeared to offer a look at their series, Valley of the Boom; The Hot Zone producer Lynda Obst discussed her “long journey” with the title, and its success in the “golden age of television”, as the network’s most-watched scripted series ever; and from Life Below Zero, Sue Aikens and Ricko DeWilde stopped by, for a behind-the-scenes look at their intense docuseries, which recently hit its 100th episode benchmark.

Additionally, a few of National Geographic’s biggest stars chimed in via video message. Margulies discussed her pride in the The Hot Zone, and “the urgency of the message it delivers. The narrator behind nature doc The Flood, Angela Bassett spoke to “the magic of Africa’s Okavango Delta, a wild paradise that is like no other place on earth.” And then, there was Bear Grylls, narrator of Hostile Planet, who lauded the series’ team for their commitment to “cinematic craft,” over the course of 1,300 days of filming on all seven continents.

The evening then wound down with concert performances on behalf of The Flood and Hostile Planet, scored by Hannah Parrott and Benjamin Wallfisch, with vocal parts performed live for the latter series by Grammy Award-winning singer-songwriter Judith Hill.

In his final remarks, Smith offered a reminder to Emmy voters: “Don’t forget, voting opens a week from tomorrow.” For Chris Albert, National Geographic’s EVP of Communications, Talent and Awards, this has certainly been at top of mind.