Nas has been one of rap music’s pre-eminent old-school diplomats and cinéastes since he opened his 1994 debut, Illmatic, with a clip of hip-hop flick Wild Style. The multi-platinum rapper has combined his twin passions as executive producer of The Get Down, Baz Luhrmann’s visually arresting look at the birth of hip-hop culture in New York City. A mix of painstakingly accurate historical details and explosive fantasy, the Netflix series brings the Bronx in 1977 to a life thanks to a group of expert consultants, including Grandmaster Flash, Kurtis Blow, Kool Herc, Rahiem of the Furious Five and journalist Nelson George. But Nas has taken a weightier role, not only co-producing the project, but writing a good chunk of the raps that appear in the series’ 13 episode run.

“Working with film is like has been one of the things I always wanted to do since I don’t know when,” Nas tells Rolling Stone. “Maybe even before rap…. I don’t know if I’m an expert, but I’m just a super fan of the old school and the golden era, and so it just felt like I couldn’t have asked for a better project to be involved with.”

In the first episode, the series’ protagonist Ezekiel “Books” Figuero is portrayed as a gifted teen poet and a formidable park rapper played by Justice Smith, and a grown Nineties hip-hop icon portrayed by Hamilton’s Daveed Diggs. Nas wrote the lyrics for his introspective poems, battle raps and nostalgic reminisces, providing a throughline for an episode already loaded with super disco breaks and claustrophobic krautrock. Before Part One premieres on August 12th, Nas talked to Rolling Stone about his new role as hip-hop’s prestige TV storyteller.

How did you end up connecting with Baz?
I just got a call from them about sitting down. And we sat down and we had a discussion about both of our love of hip-hop music from way back; from Run-DMC to before Run-DMC, and what we both loved about it…. He knew what he wanted from me … and it was a just a perfect time to get involved. I sat down with him Nelson George, and we had great talks about it. Grandmaster Flash, talked with him. Great talks about New York City and the culture during that time period, what was happening politically, what was happening in Hollywood. Baz had a chart in the office of historical things that happened that year.

You were about four years old in 1977, and it was probably about three or four years later that you started getting seriously into rhymes. So what was the moment that got you into hip-hip culture?
The moment I was born. [Laughs] I heard someone, I think it was Kool Herc, super DJ pioneer of hip-hop from the Bronx, say hip-hop started in 1973. That’s the year I was born. So I was actually born with hip-hop. That’s my brother, that’s my sister, that’s my twin. “I am hip hop,” like KRS-One said. Music was just a thing that was coming out of the windows in Queensbridge, that was coming out of the park jams.

Rap songs, it’s hard to pinpoint the first one, but I have to give a lot of credit to Kurtis Blow with “The Breaks.” That record was not just a rap record, it was a great music record. It was like a sign that something new was about to happen, or was happening. Kurtis Blow’s “The Breaks,” sonically, could match any of the hit records of the time. And of course, the Sugar Hill [Gang’s] “Rapper’s Delight.” At that point in time, Stevie Wonder was beginning to do a little rap, and a lot of music people were starting to do to a little rap thing at the end of their songs. I don’t really remember a time where there was not rap music. 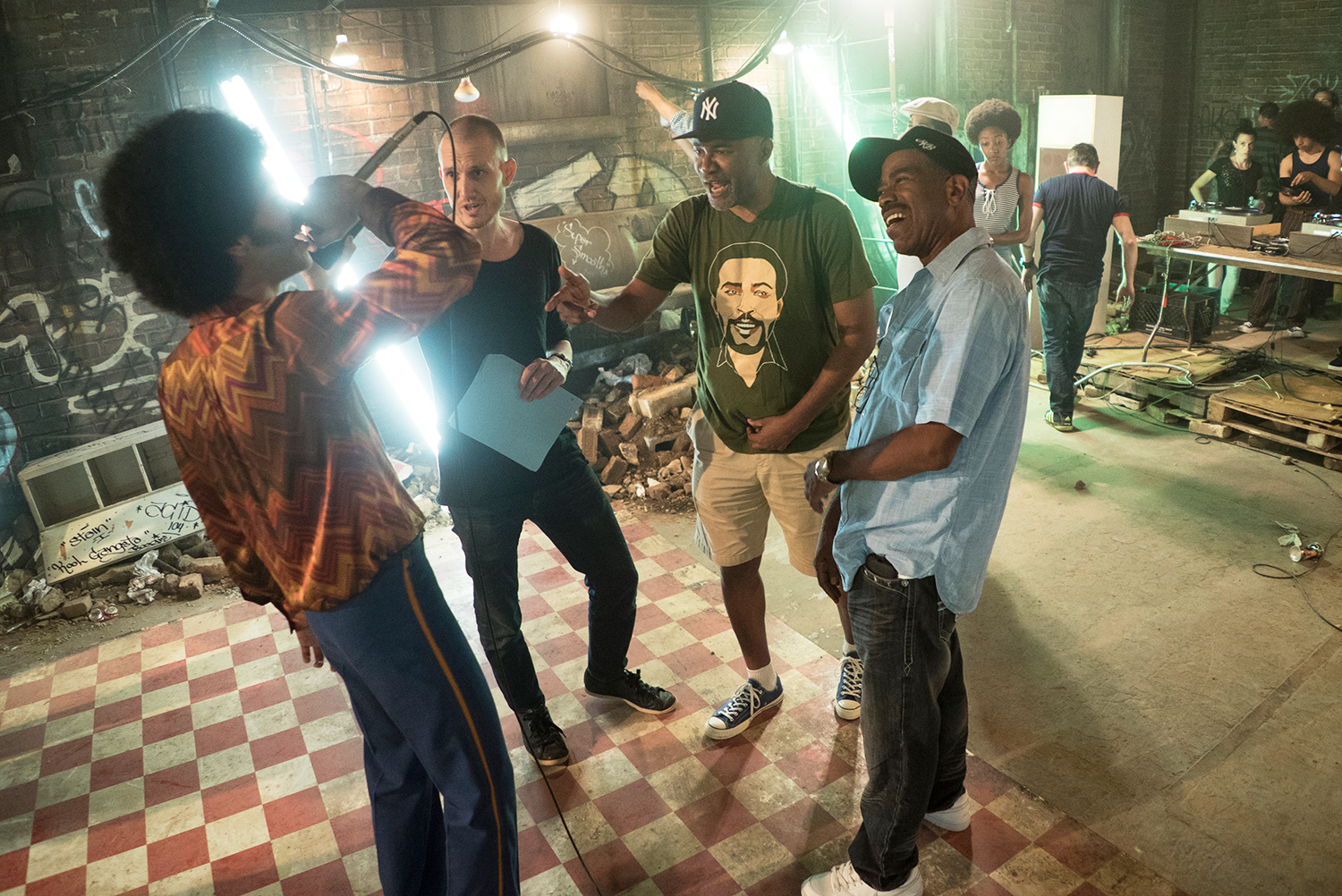 So you wrote every rap on this show that comes out of Ezekiel’s mouth. How did you get into the headspace of this character?
I put myself in a position … I said to myself, “If it was you, if Ezekiel was you, you’d be telling your story. I made myself Ezekiel. I said, “Yo, Nas, what’s your story growing up in hip-hop? How do you feel by making it to become a voice in the Nineties, because you remember all the hard times, you remember Mayor Dinkins being elected, you remember New York City when the streets were flooded with crack, and crime was everywhere.” So I am Ezekiel. Ezekiel is older than me, but I am that.

What was the most challenging part?
I don’t just write Ezekiel’s part … I write for the group. This is an early style. This is the Seventies. These are the tapes that the older guys were playing in my neighborhood, listening to, partying to. This is a different style, this is not what I normally do…. I placed pictures around myself of parties like Harlem World, the Roxy, jams out in the Bronx in the park, DJs like Jazzy Jay on the turntables, of course Grandmaster Flash photographs everywhere, the Furious Five photographs around me. I really just went into that world.

Did Baz give you any notes on your raps?
Baz was very very nice about explaining — very clear — and he listened, and was very chill about what he wanted, what he saw. I was just a student when it came to Baz.

Did you work with the actors in person?
I really didn’t want to be that close. It’s the same like with [my records]; I record songs, and I don’t really listen to them that much. I would see pieces of the rehearsals and stuff like that. I was like wiping the sweat off my face, like, “Thank God they like what I did. Thank God they perform what I did. And it doesn’t sound like me, it sounds like what they should sound like. It sounds like them.” So I was just wiping sweat off my forehead every time I would see the rehearsal. If I sat down too close to it, I would’ve went crazy.

To kids who are maybe in their twenties; that whole world of Seventies and early Eighties rap music is totally alien. There’s a whole generation that really doesn’t listen to too much rap before 1993.
I was watching a documentary on Chuck Berry a little bit yesterday, and his music is not really my time, but music is timeless at the end of the day…. At my concerts, I see kids! I see all ages, but I see kids! And, if I’m their first concert, or one of their first concerts, they have so much more to learn. I’m excited to be a part of Get Down, ’cause this could be just what they need.