“The first MTV Movie Awards was in 1992,” Robert Downey, Jr. said while accepting his Generation Award last night at this year’s edition at the Nokia Theatre in Los Angeles. “And I said, ‘Wow, that’s my generation’s version of the Oscars.'” That little gold, bald guy is still around, of course, but the network’s celebration of all things pop-blockbuster-y has proved to be a brattier, more irreverent twist on the venerable, stuffy awards show.

And like its predecessors, the 24th installment had an unmistakable air of catering to a young demographic — the same one that flocks to the summer movies that are peddled during commercials and, more often than not, the actual ceremony. (For instance, Downey’s heartfelt acceptance speech clumsily segued into his introduction of a clip from his forthcoming Avengers: Age of Ultron.) But not everything that happened before and during the show made it on air. Here’s what we saw go down from inside the 2015 MTV Movie Awards that didn’t make it to your TV screen.

Give It Up for the Cheap Seats
The closest orchestra seats were occupied by nominees and folks associated with the movies. But most of the rest of the orchestra guests had a blasé attitude about the entire evening. “The ordinary people in the back get a lot more excited,” one of the front-row folks said, and that dynamic ruled the rest of the show. Schumer did a solid job as host, but her bits drew little reaction from the orchestra seats. It was only in the mezzanine where you could hear real laughter — which is appropriate, given this is an award show for the people who plunk down money for multiplex tickets on Friday nights.

Not So Fast
The night’s first presenter, Furious 7‘s crooning Vin Diesel, came out to announce Best Female Performance. On TV, you could tell that he started on one side of the stage — but then he read the winner on the other side of the stage after the producers ran quick clips of all the nominees. What you didn’t see is that he spent so much time slapping hands with the pit crowd that he almost missed his cue to get across the stage before the clips ended. The stage crew didn’t let that near-mistake get close to happening again the rest of the night, moving presenters efficiently from place to place.

Finding Fault
As Diesel read Shailene Woodley’s name for Best Female Performance, the Nokia registered its first deafening scream from the cheap seats. It was a sign of things to come: The Fault in Our Stars would consistently get the biggest cheers, an early indicator that it would clean up. And as Woodley walked to the stage, John Green, the author of the YA-weepie classic, was the first out of his chair to clap. It was a great moment of mutual admiration that would be reciprocated once the star gave a shout-out to the writer during her acceptance speech.

Beside Amy Schumer
As with most awards shows, the MTV Movie Awards make a big deal about who’s hosting — but once the program actually begins, that person doesn’t seem particularly important if you’re in the theater. After her opening monologue, Schumer mostly stayed out of sight, leaning heavily on prerecorded video bits and quickie segments. When she did appear on stage while the cameras weren’t broadcasting, there were something utterly charming about how small she seemed in comparison to the crew members frantically running around as the show prepared to come back from commercial. In one quiet moment, Schumer just stood downstage right, her chin resting in her palm as she leaned on a fake fire hydrant. A second later, the show was back live and she returned to her glowing onscreen self. 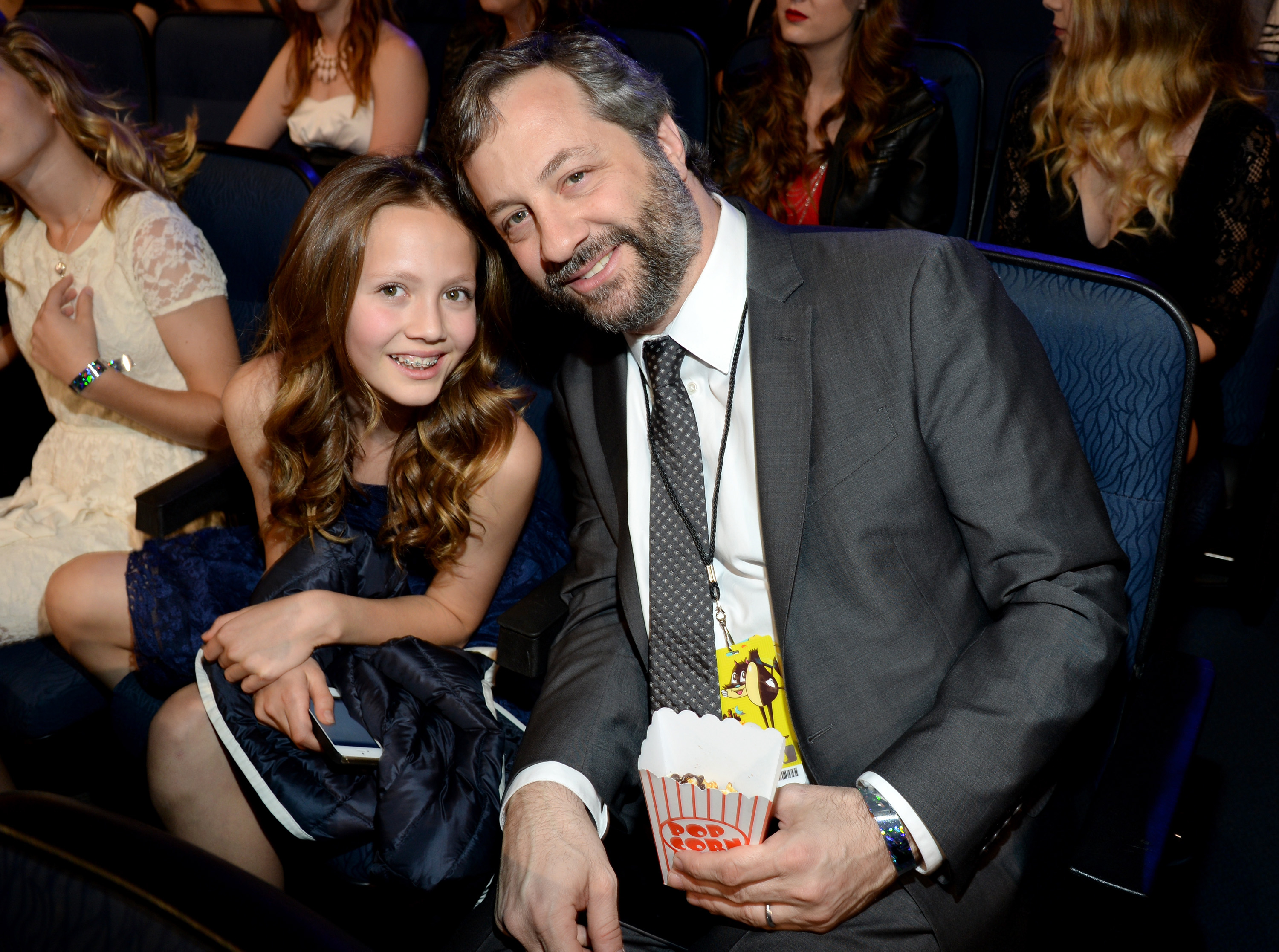 Our Buddy Judd
Last night demonstrated that Judd Apatow is America’s favorite Hollywood uncle. Though he participated in the Schumer bit about seat-fillers during the broadcast, he was more of a star during the commercial breaks, getting out of his chair to chat with plenty of well-wishers, including The Fault in Our Stars‘ Nat Wolff. He also spent a little time talking to the young actor’s Paper Towns costar Cara Delevingne, and apparently a few random civilians got up close enough to say hello. In this arena, he was practically treated like royalty — a gracious living legend who was happy to casually shoot the breeze with famous and non-famous fans.

Lips, Locked
During the broadcast, MTV showed a quick clip of Schumer and actress/singer/model Amber Rose sharing a lip-lock after being provoked by a kiss-cam. The kiss went on even longer when the bit was filmed during a commercial break. Also featured on the kiss-cam: Kevin Hart, who playfully kissed his young kids; Fantastic Four‘s Jamie Bell, who leaned in to costar Kate Mara but got shot down, as she jokingly kissed Bella Thorne’s cheek instead. The camera also held on Woodley for an agonizingly long time. She finally relented and kissed Wolff. 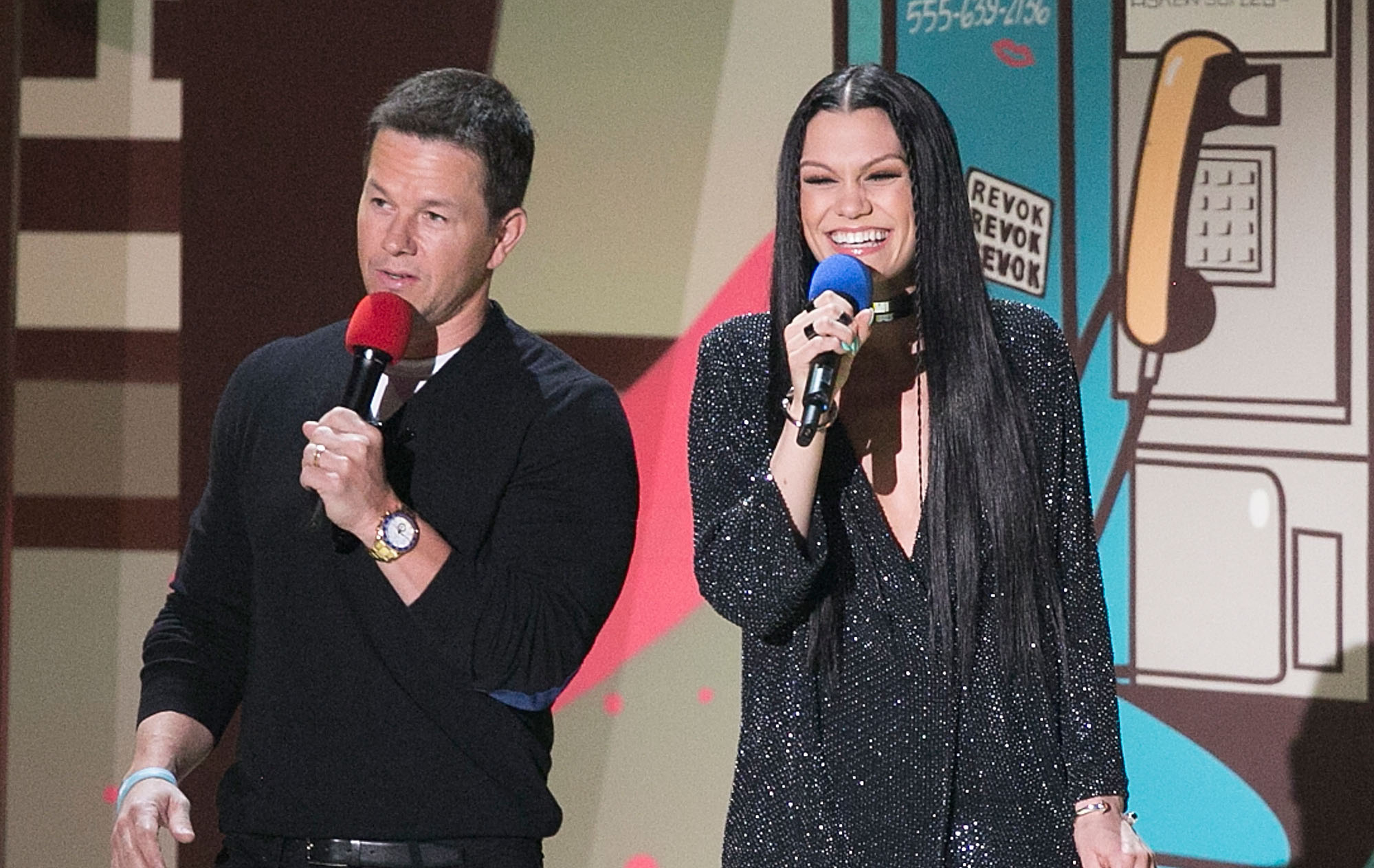 Going Off Book
Schumer and a few presenters didn’t always read their prepped banter verbatim, but only one man went completely off-script, much to the surprise of the woman beside him. That would be Mark Wahlberg, who took the stage with singer Jessie J to present Best Comedic Performance (which would be won by Channing Tatum for 22 Jump Street.) The teleprompter had Wahlberg quickly riffing on Jessie’s British accent, assuming it was fake and asking her to say “Downton Abbey.” But the Ted 2 star called an audible, clearly leaving Jessie unable to keep up as he asked her about the meaning of some off-color U.K. slang, allegedly “for his mother.” (What we would not have given for an Andy Samberg cut-away or guest appearance at that moment!) The “Price Tag” singer looked flustered during the broadcast, and viewers at home might have assumed she was ready to run to the hills. But as the producers cut to the Best Comedic Performance nominees reel, the two presenters could be seen laughing in the shadows.

And Now the Screaming Starts
Watching the awards from your living room, you might have heard the occasional incoherent scream from the crowd when a winner came up to accept his or her Golden Popcorn. In the Nokia, however, those screams weren’t just decipherable — they were shockingly jet-engine loud and distinct, the relative quiet of the crowd suddenly shattered by the impassioned squeals of young women in the back. The loudest was a tie: “I love you, Channnnning!” and “We love you, Emmmmmily! (for Gone Girl‘s Emily Ratajkowski).

Put Your Hands in the Air. Pretty Please.
The musical acts had a tough time moving a crowd that seemed disinclined to engage. Fall Out Boy’s “Centuries” and “Trap Queen” medley got a few heads bobbing, but it was Charli XCX who really shook the staid audience. “Famous” provoked some raised, waved hands from the prestige seats, which where then joined by plenty more once Ty Dolla $ign and Tinashe joined her for the wonderfully filthy “Drop That Kitty.” (Our favorite red-carpet line of the evening belonged to Kelly Osbourne, who asked the singer, “Drop that kitty…you’re talking about your vagina, right?”) Walking offstage, Charli seemed deservedly damn proud of her bad self.

No, Really, Drop That Kitty
Workaholics‘ Anders Holm was nominated for #WTF Moment from Top Five, but at the show he should have won Best Good Sport. During the broadcast, he gamely shilled for T-Mobile’s Best Breakup award, appearing onstage to give the prize to Gone Girl. One of the funnier jokes of the night got cut, though: As Holm stood straight-faced alongside Vine comedian Logan Paul, who was silent and inexplicably holding a cat, neither man said anything after revealing the winner. Finally, after it was clear no one was coming up to accept the trophy, Paul asked, “Do we give the cat the award?

Avengers, Assemble!
Sure, it’s a small sample size, but no doubt Marvel will be thrilled to know how well its Avengers tie-ins played with the Nokia crowd. As a Schumer video about her unsuccessfully auditioning for the likes of Foxcatcher and Selma played on the theater’s screens, some in the audience started to notice the center stage curtain rising — revealing a large sculpture of the iconic A logo. Soon, the crowd had turned their focus to the arrival of the upcoming sequel’s stars, causing a ruckus in the audience before their names were even announced. And, later, when Robert Downey, Jr. unveiled an exclusive hulk-busting clip from the forthcoming Age of Ultron, it was the first time that a film segment had the full attention of everyone in attendance. At home, the reception seemed enthusiastic; in the theater, it was damn near deafening. There’s simply no way that movie doesn’t make a gajillion dollars.

Aren’t You….?
Schumer mentioned how ridiculously beautiful everyone in the crowd was, even the crew and seat-fillers. “Can we just point out how insanely hot everybody here is?” she asked. But it was also a crowd in which people-watchers had to do plenty of double-takes. You could not be blamed for thinking that several attractive, stylish guests hanging out in the orchestra seats were Nick Lachey, Taylor Swift, Jack White and Ellar Coltrane. Upon closer inspection, however, these folks were not those celebrities — they just dressed and did their hair eerily similarly. It’s not enough to stock the crowd with actual movie stars; you’ve got to have lots of famous people’s doubles as well.

The Fix Is In?
An advantage of actually attending the MTV Movie Awards is being able to predict who’s going to win just by observing who’s in the room. Right before Zac Efron and Dave Franco won for Best On-Screen Duo, they got to their front-row seats dressed as their different Robert De Niro characters from Neighbors. When they accepted their award, their scripted onstage banter appeared already prepped on the teleprompter in the back of the room. And later in the night, during the commercial break before Best Male Performance, Bradley Cooper suddenly appeared near the front of the room. On cue, he won a few minutes later.

Can’t Play Him Off
Cutting it close to the show’s two-hour limit, the producers started urgently flashing “Please Wrap It Up” on the teleprompter early in John Green’s acceptance speech for Movie of the Year for The Fault in Our Stars. It kept flashing the entire time, but he kept on talking, wrapping up with his touching eulogy to his departed friend.

Invisible Man
The writer and director behind this summer’s biggest movie went virtually unnoticed the whole night. Dressed in jeans, T-shirt and blue jacket, and with glasses sitting on top of his head, Joss Whedon — the man behind Avengers: Age of Ultron — left his seat at the end of the night and made his way out of the Nokia without anyone seeming to spot him. Finally, just as he was making his way to the lobby, a few young women up in the mezzanine shouted, “Joss!” They had to do it a few times before he heard them and then located the source of the screaming. They waved at him. He smiled and waved back, heading off into the night. Even a guy eating a pizza at a nearby restaurant who was wearing a Captain America shirt didn’t recognize the man behind the Marvel superheroes juggernaut as he strolled nonchalantly by.

Dance Party
Her night over, Schumer thanked the crowd one last time as the show wrapped up. But then she looked behind her to a closed door, apparently expecting someone to come through it. Finally, her sister Kim, who’s a producer on Schumer’s forthcoming comedy Trainwreck, emerged to join her in an impromptu dance party as confetti fell on a crowd that was quickly moving for the exits.