You have just co-created a 10-episode series for Netflix that both adheres to a standard rom-com template (boy meets girl, boy hooks up with girl, boy and girl drive each other mad with respective neurosis) and tears down the genre’s walls at the same time. There are a number of pun-filled titles you could go with here: True Grow-mance, say, or Rock and a Heart Place. Instead, you go short, sweet and all-too-obviously to the point: You call it, simply, Love.

“It felt like sticking your chin out there, you know?” says star/co-creator Paul Rust, regarding the show’s concise name. “We were just trying to avoid anything cute or clever.” He shouldn’t have worried: This collaboration between Rust and writer-producers Judd Apatow and Lesley Arfin has absolutely no trouble filtering out such trite elements. On the contrary, the romantic comedy (premiering today on the streaming service, and not to be confused with the 3-D Gaspar Noe movie of the same name) is a savagely honest, frequently hilarious story about two thirtysomething fuck-ups who use each other to fix themselves. If anything, the title often feels like a joke at the expense of its characters, whose deranged courtship reveals the maddening isolation of modern life in Los Angeles.

“A friend of mine made an observation about being stuck in a traffic jam on the freeway,” Rust explains over the phone when asked if the show was shaped by its locale. “All you need for the carpool lane is two people. But once you put the carpool lane there you know for a fact that anybody who’s not in it is alone. You look out at the sea of unmoving cars on the freeway, and you know that there’s precisely only one person in each of them.” He sighs with the weight of personal experience. “It’s such a devastatingly lonely concept.”

Forget driving on the freeway; in Love, more so than in life, you can tell a lot about someone from the way they behave in bed, with every position and errant bit of dirty talk providing a reservoir of vital information. Mickey (Community alumna Gillian Jacobs) is an alcoholic romance addict who’s introduced getting humped by her coked up ex-boyfriend as he screams “I am God’s warrior!” Gus (Rust) is a passive-aggressive wimp who acts the part of “nice guy”— we first meet him as he’s nervously writhing on top of his girlfriend, pausing between thrusts to ask if she’d like to move in with him.

Both of these strangers are single by the time they collide at the end of the first episode, each too emotionally unstable to be in a relationship, and too desperate to remain by themselves. As a viewer, you naturally tend to assume that the boy and the girl are going to get together, but Love is the rare story that refuses to let you assume that they should. As Mickey puts it when she takes an Ambien and addresses the congregation of a New-Age church: “Hoping for love has fucking ruined my life!”

Unfolding like a five-hour Judd Apatow movie, the series has the time and patience to let us watch Gus and Mickey take two steps forward and one step back as they repeatedly crash into each other. “I think it feels like it moves more at the pace of real life,” Jacobs argues. “The show has enough time to have periods of confusion, misconnections, awkwardness — it just seems like dating is getting more complicated, and relationships don’t actually develop in a clean 90-minute arc in real life.”

The show focuses on the worst of what these people are capable of — less “you make me a better man,” more “I want you to be weak, as weak as I am.” In fact, one of the biggest obstacles the project encountered in its development stage was that the characters were too well-adjusted. “Our relationship was our initial jumping off point,” Rust says, “but we quickly realized that we wouldn’t get a lot of good story stuff out of it. I mean, we’d been in therapy for years, and Judd was rightfully like: ‘These characters are too aware of what their issues are, but if you dial that back then it might be easier to have them get in their own way.'”

“We didn’t want it to be that thing where a woman just needs to find the love of a nice guy and she’ll be okay and it’ll fix her. That’s just an incorrect way of thinking.”—Paul Rust

Rust, who you might or might not remember from the 2009 Hayden Panettiere vehicle I Love You, Beth Cooper (“It was a little off brand,” he jokes), felt cornered into writing a role that he could play because he wasn’t getting offered many worthwhile parts. Sharp and sniveling at a time when most comedy stars are soft and affable, Rust feels like a Todd Solondz character who wandered into a Judd Apatow world — a nerd in the age of dorks. “At one point I just decided that it might be more creatively rewarding to put my time into writing on stuff that I could really be proud of rather than trying to get a one-episode part on Modern Family or something.”

So while the show might not be strictly autobiographical, it wouldn’t be a stretch to think of Gus as Rust’s less fortunate looper. The character is a wannabe writer for a ridiculous show about a coven of witches in Kansas (called Witchita, natch), while Rust earned his comedy cachet by working on everything from Arrested Development to the new Pee-Wee Herman movie. Both of them are dorky pop culture aficionados from the Midwest who are fascinated by L.A.’s cultural footprint, and Rust’s real-life friends play the people who crowd into Gus’ apartment and help him write silly theme songs for serious movies (the ditty they pen for Carlito’s Way will be stuck in your head for weeks).

Mickey, on the other hand, doesn’t borrow anything directly from Jacobs’ life. The actress may have a history of playing human tornadoes, but Rust insists that “Gillian is the most well-adjusted person I know,” and it’s that discrepancy that inspired him, Arfin, and Apatow to write the role with her in mind. “I knew with someone like Mickey it would be easy for an actress to stand in judgment and let everyone watching know that they didn’t want to be confused with their character,” Rust elaborates, talking about a character who has such a gift for self-sabotage that she forces Gus to go on a date with her roommate as soon as she realizes that she likes him. “Gillian’s really awesome because she just commits to it without apologies. I feel like she always kinda has Mickey’s back.” 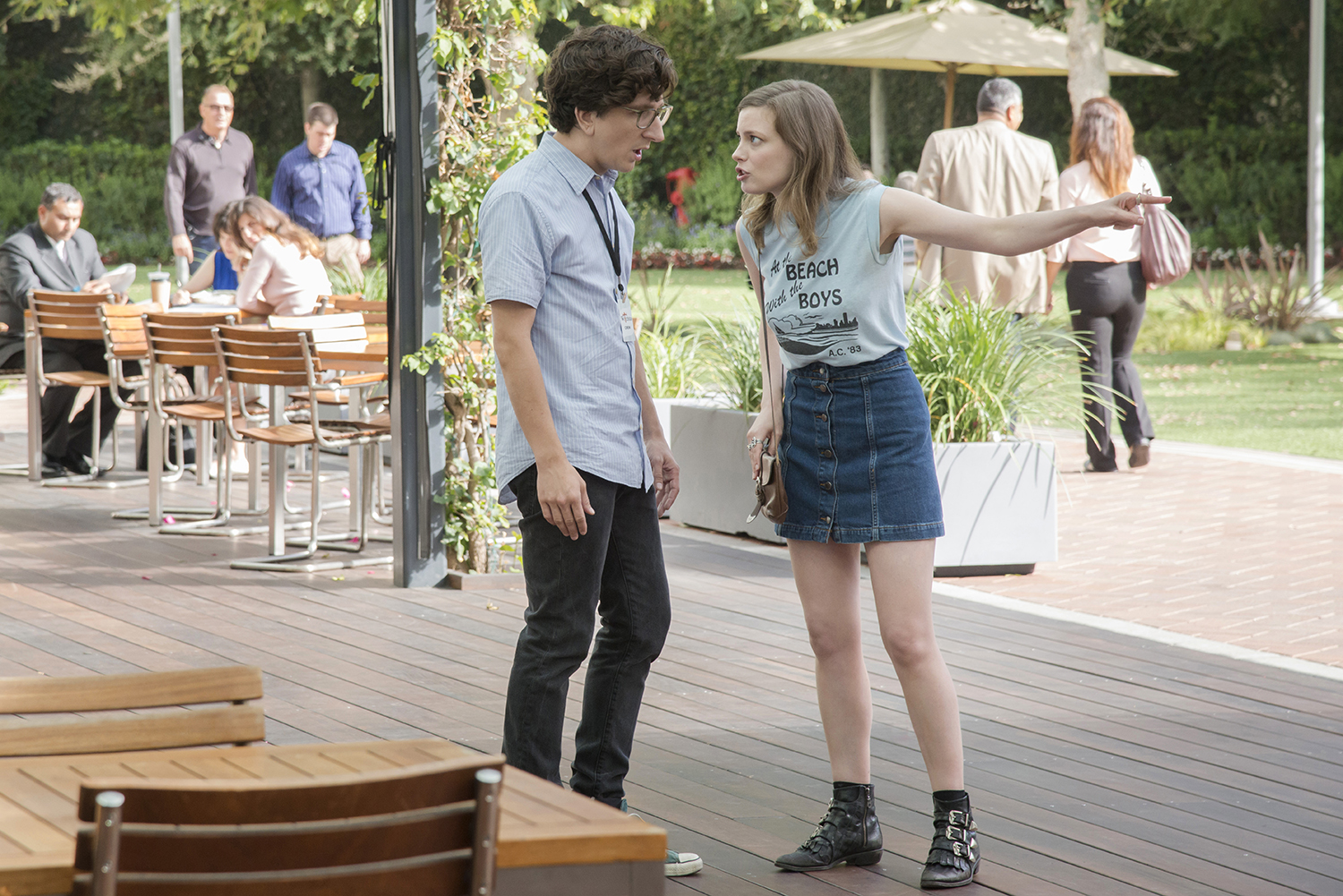 “She’s still struggling a lot,” the actress concedes, “but underneath her tough exterior there’s a really vulnerable person who just wants to be loved.” Referencing one episode in which the character incites a fistfight between two exes and jumps off a roof into a swimming pool, Jacobs reasons that “Mickey is someone who has a real and intense need for attention, and in the moment will do anything to get it — it’s on the drive home that she’s really regretting everything she said and did.” You don’t realize how screwed up she is until Andy Dick shows up and immediately identifies her as a kindred spirit: “That episode is like the student meeting the master,” Jacobs laughs.

Both characters have to be unstable for Love to work — and more importantly to honestly address what Rust sees as its central dilemma: “If I’m not emotionally stable, should I put myself in a relationship? Because wouldn’t that mean that I’m just using it as a distraction from my problems?” He pauses for a second on the other end of the line, perhaps glancing over at the empty carpool lane. “We didn’t want it to be that thing where a woman just needs to find the love of a nice guy and she’ll be okay and it’ll fix her, because that’s incorrect. That’s just an incorrect way of thinking.”