Maggie Pulls a Gun on 'The Walking Dead' - Rolling Stone
×
×

What’s causing Maggie (Lauren Cohan) to pull a piece on The Walking Dead? We won’t know until Sunday, but these three photographs – all exclusive to Rolling Stone – give us plenty to consider. In “Isolation,” Season Four’s third episode, it was Maggie’s job to keep everyone safe when the brigade left for the veterinary hospital. Could it be Glenn’s flu that’s keeping his lady on edge? It’s good that Cohan, 31, is no stranger to stress, having witnessed the not-at-all-amicable dismissal of The Walking Dead‘s first showrunner, Frank Darabont. “It was a tumultuous time,” she told the magazine last month. “There were feelings of not knowing what was going on. It was like the kid that doesn’t know if their parents are getting a divorce.”

Relive the Biggest Surprises from The Walking Dead‘s Third Season 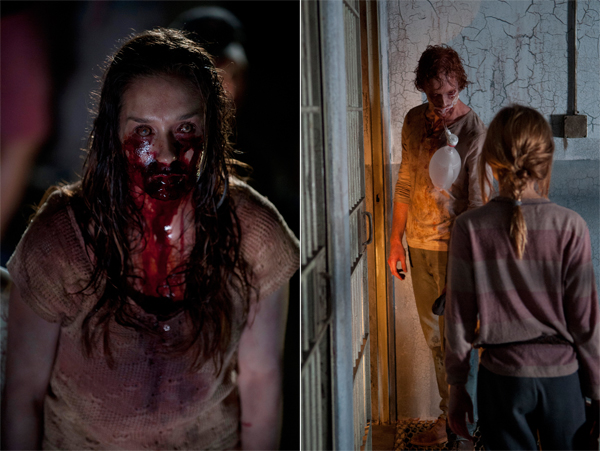 And who’s this Walker on the left? While reporting his Rolling Stone cover story Blood, Sweat & Zombies: The Tortured History and Unstoppable Rise of The Walking Dead, author David Peisner scooped some intel from makeup maestro Greg Nicotero, who learned the zombification process from legendary Night of the Living Dead director George Romero. “Most every zombie on the show has been designed or conceptualized by me,” he says. “On a busy day, we’ll have eight makeup artists. They’ll be gluing prosthetics and doing makeups, dentures, custom contact lenses and sometimes wigs. Every year we continue to push the envelope in terms of stuff that you haven’t seen before.”

Something else we’ve never seen – a kid staring down an un-dead medical patient. All signs point to this little girl being Ryan’s daughter Lizzie, who offered to kill her zombie-bitten father because “that’s what her father taught her.” Carol, her mother-surrogate, was charged with making sure she survived the zombpocalypse. But Carol told her she’s weak, and by last week’s episode, Lizzie was quarantined in Cellblock A with Glenn, Sasha and Doc S. Could this encounter mean the end of the road for this angelic blonde? Leave your thoughts in the comments section below.