In 2014, Michelle Obama and Tom Hanks toasted Lily Tomlin’s lifetime achievement at the Kennedy Center — an honor that didn’t mark the end of her career so much as kick off a comeback. Nearly five decades after her debut on Rowan and Martin’s Laugh-In, the 75 year-old is hot: Her Netflix show Grace and Frankie, costarring Jane Fonda, was just renewed for a second season and helped Tomlin earn her 22nd Emmy nomination. And the comedienne’s new film Grandma — about a cranky lesbian septuagenarian who helps her granddaughter get an abortion, opens August 21st — was conceived entirely by writer-director Paul Weitz (About a Boy) as a showcase for his star’s talents. As Tomlin once said, “The road to success is always under construction.”

Backstage With Lily Tomlin and Her Brand-New Broadway Baby

12 Most Important Lines From the Historic Gay Marriage Decision

Grace and Frankie is a show about two older women rebooting their lives after a divorce. Why do you think it’s clicking?
We just try to make the show meaningful, you know? We really embrace issues that old people have to deal with that, truthfully, aren’t so different from what younger people deal with. You can start over at any time — and the life that you have is not the only life that is going to suit you.

When we talked a few years ago, you felt comedy was getting too cruel. Do you still feel that way?
I would never say comedy should be anything. I would just say, you should judge if it’s well-founded or really illuminating.

I ask because you’re so good at being mean. In Grandma, you beat Paper Towns star Nat Wolff with a hockey stick and say his stubbly face looks like an armpit.
Yeah, well…his character had it coming because he was a such a little shit to my granddaughter. And he sees [my character] as this old bitch who doesn’t have any relevance at all. But I don’t think I would say anything to anybody who was really vulnerable just to make them hurt.

Your character helps her granddaughter get an abortion at a time when access is being rolled back across the country.
Gloria Steinem famously said, “If men could get pregnant, abortion would be a sacrament.”

From Grandma to doing peyote on Grace and Frankie, you can get away with a lot you couldn’t have done before.
When I was doing specials in the Seventies, they wanted to know every word in the script. They would come down and stop us in the middle of shooting and say, “We don’t want this on the show.” They probably thought they were telling me for my own good. We had to find that out for ourselves. You can’t be told not to do something.

You and your partner Jane [Wagner] both have roots in the South. Were you surprised to see the Confederate flag come down?
I said, “Well, they’ll never take that down.” It’s kind of miraculous. At the same time, how can they do anything else? The time has come. For same-sex marriage too.

Do you think celebrities like yourself coming out played a role in public opinion shifting so quickly?
Maybe in the last decade. Before that, people were much more cautious about coming out. I only officially came out in 2001 or something. And that’s because a guy who was interviewing me said something about being gay and I said, “Yeah.” First of all, 10 years ago I couldn’t imagine that anybody would be interested in my sex life. It’s like, I saw a cartoon where somebody’s at a press conference: “I’m here to announce to everyone that I am heterosexual.” It seems like the same thing with people who call press conferences just to say, “I am gay and I’ve been gay and I will always be gay.” It just struck me as some kind of benign hubris.

You didn’t hide your relationship but you didn’t make an announcement, either.
It wasn’t necessarily easy for me to come out. When I was doing specials in the Seventies, everybody in my company knew that Jane and I were a couple. I had one of our writers say to me, “I think you and Jane should come to work in different cars.” I said, “Well why would we do that?” She said people everywhere are talking. I said, “Well we’re not gonna go out and get another car just to drive to work!”

You hit back with a joke…
I was always really nimble, you know. I couldn’t betray myself or lie about myself. I was on The View not long before I came out. Barbara said something like, “You’ve never been married. Have you just never found the right guy?” I said, “Now Barbara, you and I both know that’s not the reason.” And she just shut right up. Those kind of things happened a lot. From the 1970’s forward, I wouldn’t lie. I just couldn’t. I could think of so many anecdotes, but I don’t want to talk about them.

Now it’s so different.
It’s meaningless now. I did what I could do in the time. I never didn’t support an issue or show up for a fundraiser or do whatever I could do. Maybe I was just shy: Shy of calling a press conference. 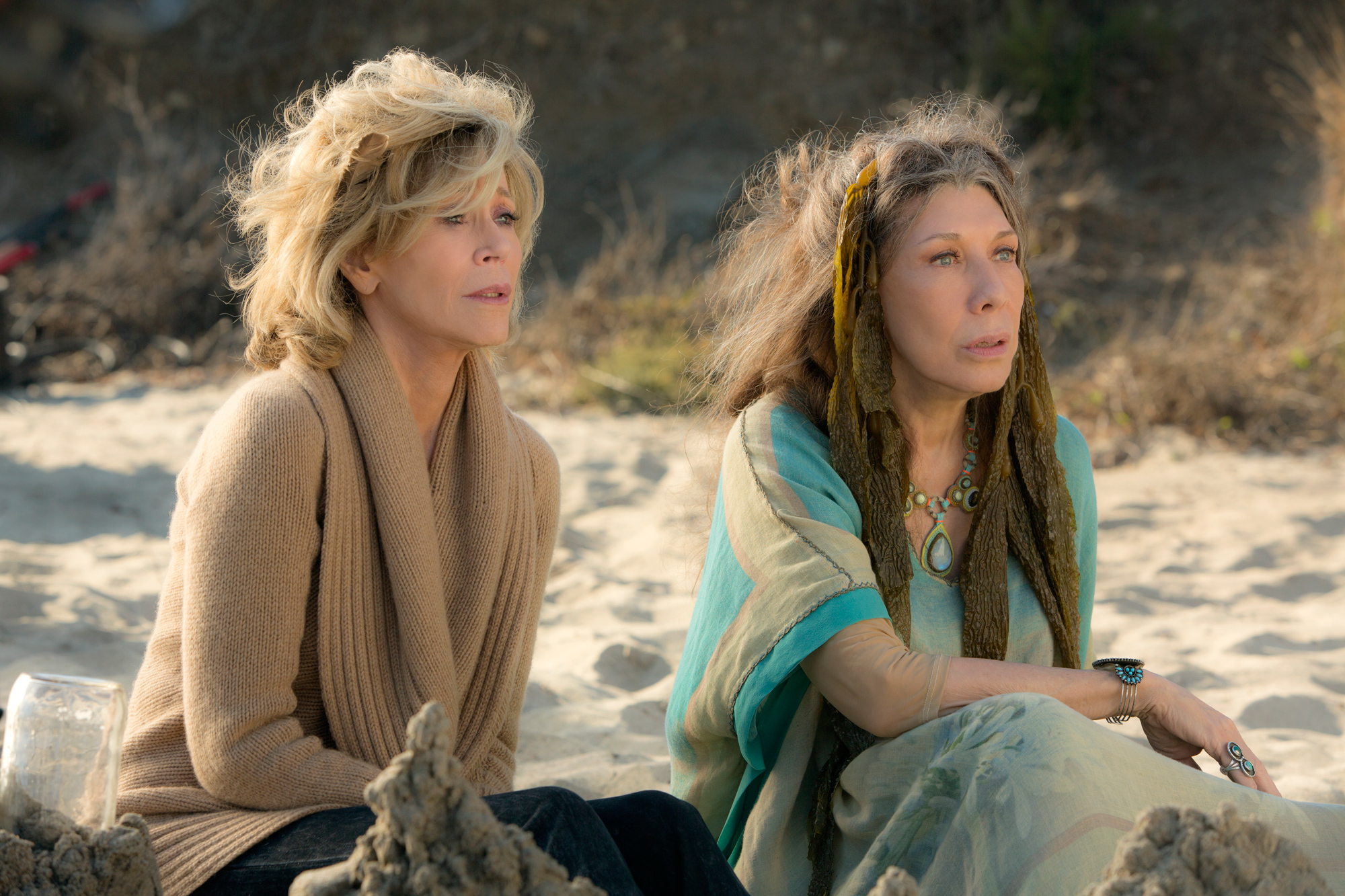 You saw the negative side of social media when that video of you and David O. Russell went viral. Recently you had the opposite experience: Fans rallied when it was reported that Martin Sheen and Sam Waterston were being paid the same as you and Jane Fonda on Grace and Frankie. How was that resolved?
How it was resolved is that Jane and I have a back-end [payment in addition to salary, unlike Sheen and Waterston]. When I raised the issue, the guys were so funny about it. They went on the Today Show, Matt Lauer was trying to stir [things] up and they said, “Jane and Lily should definitely be paid much more because they work harder.” Lauer asked, “So are you okay that they are paid more than you?” And they said, “Absolutely not!” It was just great!

How did it come up?
In the New York Times article, they asked, “Are you thrilled with working for Netflix on the cutting edge of the industry?” I said, kind of facetiously, “Well, I was pretty pleased with my check until I saw that the guys were paid the same as we are.” Jane even said, “They are?” I didn’t know that it was going to go any further because I was sort of kidding. I didn’t really know what they were paid!

Really?
I guess I just took it for granted that Jane and I made more. I love [Waterston and Sheen] — and I’m glad that I have a piece of the back end!

There’s a dearth of female superheroes. I read you were once lined up to be Wonder Woman in a show from the creator of the Batman series.
It never happened because the Vietnam War was heating up. They shelved the project because Diana Prince [Wonder Woman’s alter-ego] worked at the Pentagon.

So it was a comedy?
It was supposed to be a comedy. I don’t know if my costume would have been baggy or what.