We should start with the nightclub dance-off, which is as good a place as any to start with Legion.

David Haller – the FX show’s lead, played by former Downton Abbey actor and candidate for one of the most pleasurably WTF career U-turns, Dan Stevens – is a mutant. As in, one of the Homo superior players in the endless X-Men saga; the show is, in the least strictest sense, an X-spinoff set in the X-universe owned by Fox. He can read minds, control minds, move things with his mind … and has completely lost his mind. The series’ first season was largely set inside a mental institution called the Clockworks Psychiatric Hospital, where he resided with, among others, a young female mutant named Syd Barrett. (There are a lot of references in this show. So. Many. References.) At the end of its initial eight-episode run, a number of plot strands were tied up, others were left swinging low and wide and our hero had been zapped up by a flying orb and mysteriously shuttled away. You know, typical Peak TV season-finale stuff.

'Legion': Everything You Need to Know About Bold New 'X-Men' TV Show

5 Things We Learned From 'Legion,' Season 1

When the new season kicked off last April, we found out that David had been returned home from … somewhere. The parasitic demon that had been living in his head, one prone to take the form of a particularly batshit Aubrey Plaza, is on the loose. Syd (the wonderful Rachel Keller) remains hurt by his absence, but is happy to have him back. So is the secret organization that wants to harness the power he possesses in the name of good. Eventually, David finds himself in a sensory deprivation tank in an effort to figure out what happened. This is where the nightclub comes in.

By this point in Season Two’s first episode, titled “Chapter 9” – big on references, not so big on flowery titles – we’ve already seen Syd trade personalities with a cat, a trio of beautiful women with mustaches who speak in auto-tune, a monk with a basket on his head, the world’s fanciest waffle-bar commissary, some self-medicating set to Jane’s Addiction “I Would For You” and a Jon Hamm-narrated tale of an inky black bug representing psychosis. Now, David enters a crowd of gyrating bodies. Plaza is there as well; so is Jemaine Clement, a dapper series regular who, as you probably guessed, spent a lot of the first season stuck in an igloo sipping fancy cocktails, because of course. They stare each other down.

And then our hero steps back into the center of a quartet of boogieing patrons, a thumping techno song drops on the soundtrack and the newly formed fivesome break into a highly choreographed dance routine. He sends a “take that” glare Clement’s way; soon, this bearded guy in the polyester leisure suit is countering with an aggressive series of group hopping and arm movements. Both of the men and their impromptu companions are essentially chest-thumping with their entire bodies. Then violins kick in, a third group springs up and Plaza performs what feels like the world’s sexiest community-college version of Cabaret. (This is not the first time she’s danced on the show.) Back in the lab, clown prince Bill Irwin does his own solo robotic jig. We cut back and forth between these troupes, things getting more and more expressionistically violent, until the whole shebang short-circuits into darkness.

Since Legion‘s sophomore season started airing in April, I have watched this Bob-Fosse-meets-Maori-tribal-dance scene several dozen times. Every time I see it, I think: It makes no sense. It makes complete sense. It is self-indulgent, and utterly insane, and 19 different kinds of perfect. It inspires a total and utter sense of bliss. It’s familiar, riddled with pastiche and shout-outs, and totally sui generis. It is, in a way, exactly how I feel about Legion as a whole. With the notable exception of the network’s other great fuck-it-just-go-for-it experiment Atlanta – which at this point feels like it has transcended TV altogether; there’s television and then, miles above it, nestled below the stratosphere, is Donald Glover’s Atlanta – there’s no other series that feels like it’s consistently smashing traditional templates. This is how you bend hour-long narratives into gnostic, ridiculously insular knots. And the fact that it is somehow doing this within framework of pop culture’s reigning lingua franca – the superhero story – only makes it that much more mindblowing.

Created by X-writer extraordinaire Chris Claremont and artist Bill Sienkiewicz, the comic-book Legion was never your typical caped do-gooder type – he was always a loose cannon, free-radical type of X-character, one who came with an impressive pedigree and a dissociative personality disorder. (For a spoiler on that first bit, feel free to click here.) He was often drawn, per signature Sienkiewicz style, in fractured, stretched panels and, on occasion, something approaching outright scribbles. When FX announced a series based on the world’s strongest telepath from Fargo showrunner Noah Hawley in 2015, the idea felt intriguingly left-of-center. What most folks didn’t realize is the notion of a “center” really didn’t apply here. “It’s never a simple straight line between point A and point B,” he’d said after the show’s woozy first season ended – something its structure, purposefully set up to accommodate va-voom musical interludes and nightmarish psychedelic detours, can attest to. Water-cooler chatter was never “What happened on Legion last night?” so much as “So WTF, exactly, happened on Legion last night?!” 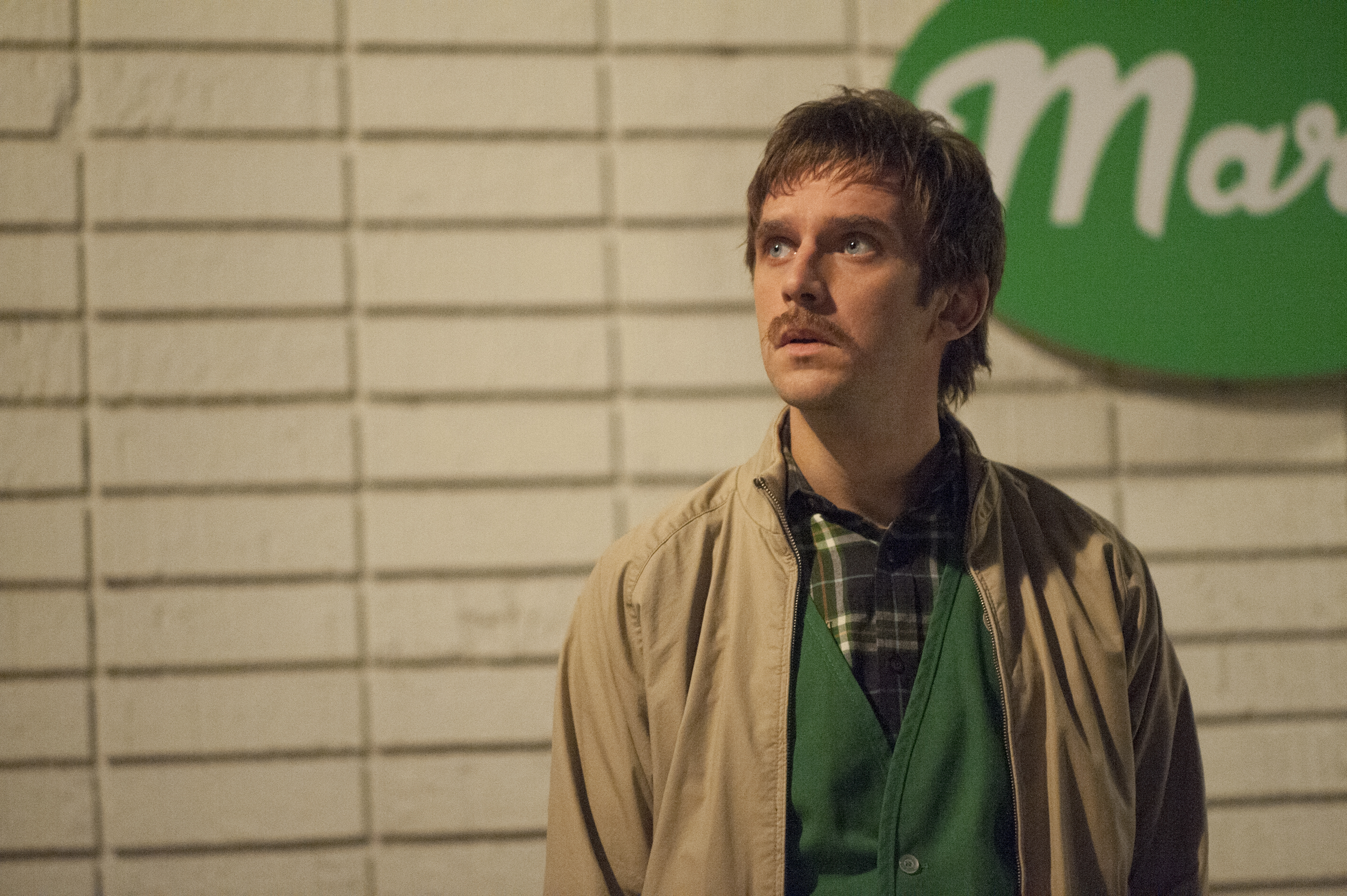 If you were willing to roll with what could feel like a weird-for-weirdness’-sake vibe, that initial batch of episodes was definitely a bad trip worth taking – a thumb in the dilated eye compared to Marvel’s other small-screen endeavors and increasingly numbing blockbusters. Season Two has not opted for more clarity or calmed things down necessarily; a recent episode featured an interrogation in what appeared to be an M.C. Escher-designed cell, plus a man calmly sawing off his own leg, and did we mention that showstopping dance sequence? But it has grounded things in terms of recognizable “quest” storyline: The “Shadow King,” which had been living in Haller’s skull and feeding off his energy, has to find his old, buried body. Unless our man and his special-mutant-unit friends beat the villain to it, sheer anarchy is loosened upon the world, etc.

The way this slightly more conventional, semi-linear foundation has paved the way this season for explorations of dealing with trauma, offbeat with-great-power-comes-great-responsibility musings and some unsettling notions regarding identity have been jaw-dropping, if not, exactly a “we cracked the code of TV” endgame. And it’s allowed the series to keep momentum going while still sustaining something like Tuesday night’s halfway-mark episode, a nearly self-contained gem that felt like several anthology-show seasons shoved into one hour. We open on Haller as a homeless, raving old man warming his hands by a trashcan; several other Davids, including a corporate lackey who becomes a billionaire, a blue-collar grunt and a white-collar drone, share screen time. (Because this is Legion, the last one observes a mouse singing Bryan Ferry’s “Slave to Love.”) A jacked-up junkie David explains that every possible outcome to choices you have made exists in alternate timelines, like so many greasy french fries piled on a diner’s Formica table.

Tucked into these Sliding Doors variations is the “real” storyline we’ve been following, in which David and his sister (Katie Aselton) deal with his increasing instability and suicidal impulses. That reality ends with him being committed to Clockworks by her authority (which drops us right where we came in re: Season One) and, thanks to a montage set to a cover of R.E.M.’s “Superman,” leads to death and loss. The other timeline we keep seeing, the bitterest one, is a version in which he lives happily ever after, nuzzling his wife and making waffles for his 2.5 kids in the suburbs. That is not a possible future even in this round-robin of rotating scenarios. That is a “choice” he’ll never, ever be able to make.

If Legion is indeed a tragedy, as Hawley has emphasized in his recent press interviews, then this episode seems to underline the concept in bold strokes. You are free to make the choices you make, and you may still be cursed no matter what. This is not an uplifting, or even unique statement per se. But to see it played out in such a non point-A-to-point-B fashion, along with a particularly gruesome set piece involving a man being folded like origami and slightly comic tangent involving mind-reading during a corporate merger (and, sigh, a blatant Clockwork Orange hat tip), is to feel like the journey means as much as the destination. There are better shows on TV, more profound dramas, more exciting thrillers, more existential headscratchers. It’s not a for-everyone jam. But there may not be a less predictable, more brainteasing pop series on at the moment than Hawley’s subversive superhero whatsit right now, or one more prone to cause such giddiness whenever a new episode drops. You genuinely do not know where this thing is going to go next, and you can’t wait to tune in. It’s enough to make you want to get up and dance.